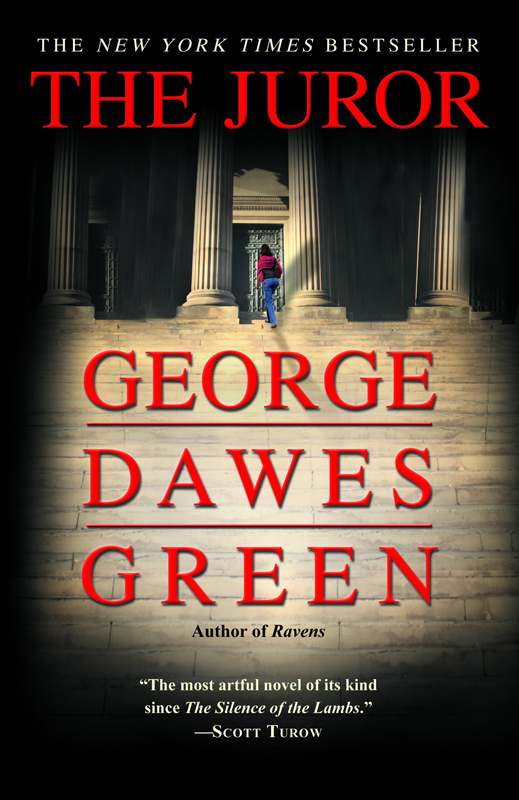 Reprinted by permission of Farrar, Straus & Giroux, Inc. Grateful acknowledgment is also made to Faber and Faber Ltd. for
permission to quote from “The Gulf” from
Collected Poems 1948–1984
by Derek Walcott.

Publisher’s Note: This novel is a work of fiction. Names, characters, places, and incidents either are the product of the
author’s imagination or are used fictitiously, and any resemblance to actual persons, living or dead, events, or locales is
entirely coincidental.

All rights reserved. Except as permitted under the U.S. Copyright Act of 1976, no part of this publication may be reproduced,
distributed, or transmitted in any form or by any means, or stored in a database or retrieval system, without the prior written
permission of the publisher.

The Grand Central Publishing name and logo is a trademark of Hachette Book Group, Inc.

Raves for George Dawes Green and the Juror

2: You must keep showing her you love her.

3: You’re not afraid of anything when you’re around this man.

4: bounced around like a dunce with my jaw hanging open….

5: O you sick Brain of Mine, O you desperate Glutton for Misery…

6: Whoever can see through his own fear will be delivered from fear

7: the cold discipline of Orion, the sweet wild confusion of the Pleiades

8: Who will protect you?

9: the least spit of sound

11: You can start scrubbing us out of your head now?

12: a child at play, a sentimental fool…

13: Does it seem depraved—my fascination for that man?

14: Struggle as hard as you like and I won’t love you any less for it….

15: The Path of Scorched and Scoured Love

A Q & A with George Dawes Green

A Preview of "Ravens"

RAVES FOR GEORGE DAWES GREEN AND
THE JUROR

“A heart-pounding, blood-chilling, page-turning tour de force… with a villain so perfectly evil, he makes Hannibal the Cannibal
look like a vegetarian.”

“Swift… entertaining… will leave you feeling jangly and vindicated.”

“A classy, romantic horror tale… The author knows how to simultaneously seduce and petrify an adult reader.”

“Marvelous… stylish and literate. It is set apart from a very crowded field of thrillers by the high quality of Green’s descriptive
prose, his dead-on dialogue, and his character development… Well-drawn characters will remain in your mind long after the
book is finished… Green has proven himself a master storyteller with an enormous talent for inventing compelling plots filled
with interesting and unusual characters.”

“The tension is nearly unbearable… a gem of deft plotting, given added luster through its rich characterizations. Annie is
an especially fine creation… The plot, jittering from one brutal, clever twist to the next, will keep readers in a cold sweat.
Green pushes buttons without remorse.”

“If you’re looking for a taut, well-crafted thriller, deliberate no further: pick up a copy of THE JUROR.”

“I’m impressed… Green takes what is essentially a familiar theme and, with a few distinctive touches, turns it into something
more.”

“An ingenious, scary, and captivating novel brimming with psychological terror that captivates from start to finish… Green
keeps the suspense burner turned on high right to the novel’s denouement.”

“A smashing read that grips the reader like an ever-tightening vise. With a flair for provocative plotting and stylish prose,
Green shows himself to be a hot young writer to watch.”

“Ruthless to the core, plausible to the last gunshot—and a whole lot of fun… The beauty of the story is that everyone has
brains. Everyone’s one step ahead of everyone else. The reader just has to sit back and let it unfold. None of the usual second-guessing
applies.”

“Sparkling… deliciously original… The story rushes to its inevitable and thrilling conclusion, conveyed through a host of
brilliantly sketched characters. Dawes brings his poet’s ear for dead-on dialogue and an artist’s eye for deftly drawn scenes…
A compelling view of the passions and compulsions that rule us, wrapped in a page-flipping story.”

“Fast-moving, violent, and totally unpredictable… shows readers there’s more to scrutinize in a courtroom than the theatrics
of dapper attorneys in their expensive threads.”

“George Dawes Green is as good as they come.”

“Gripping… Take a deep breath, find a nice reading spot, and go for it.”

“An excellent novel of suspense.”

—Marcia Muller, author of
Burn Out

“Rush out and buy it…a gripping courtroom drama…Green’s Teacher is easily the most chilling psychotic since Hannibal Lecter.”

“Green does a fine job… His juggling act is expert enough to make you laugh out loud… You won’t be disappointed.”

“Terrifying… If you buy THE JUROR for a weekend’s read, don’t make any other plans.”

For my father
,
always wandering the oak grove,
playing pibrochs on his bagpipes

For my mother
,
always radiating love

And for my beloved brother and sisters—
Rob, Om, Burch, and Alyce
,
always pickin on me

A legion of kindly guides…

My choice of birds and moths and operas was influenced by the uncanny erudition of Julio de la Torre. Tim Groover and Rick
Hood tended the orchids, Susann Craig the costumes. Angela Tribelli helped me with the Italian, Leo Iterregui the Spanish,
and Margo Dannemiller the Mam. Alex Mason provided the dragons. Other abettors include Timothy Horan, Ann Clark, Joel Ettinger,
Thalia Broudy, Julia Carson, and Crystal Chamberlain.

Finally, a few of the Most Exalted Seraphs of Divinity in this writer’s addled brain. My agent Molly Friedrich and her colleague
Sheri Holman, who were not afraid of the Caveman. My editor Jamie Raab, who brought us in from the Y-ray wilderness. And all
those who provided sustaining love: Drew and Ellen and Paula and Daniel and Larry and Nancy and Keith, and the crew at Wanda’s,
and the hard-rockin, breathtaking Kellie Parr.

E
DDIE
,
in the spectators’ gallery, leans forward. Prospective Juror 224 has just said something that he couldn’t hear. That in fact
nobody in this courtroom could hear. Judge Wietzel asks her to move the mike closer.

Juror 224 takes the neck of the mike and pulls it up to her. Then gives it a quick choke. Strong rough scratched-up farmwife
hands she’s got—they don’t match the rest of her. They don’t match her gentle gray eyes, which now sweep softly across the
courtroom, and light upon the defendant, Louie Boffano.

“Are you sure?” says Judge Wietzel. “You’ve
never
seen Mr. Boffano? In the newspapers? On TV?”

Wietzel casts her a withering look. “Do you
read
newspapers, ma’am?”

This gets him a chuckle from his toadies up front. Fuckin Wietzel, thinks Eddie. Shit on toast he thinks he is. That look
he’s giving the juror. The arrogant way he flicks his gavel to quiet the laughter.

But Juror 224 doesn’t rattle. She says softly, “I read the paper when I have the time.”

“How often is that?”

Eddie likes this woman. Kind of weary-looking, but she takes no crap from Wietzel, and Eddie likes the way those big gray
eyes slide along sort of slow and then suddenly pounce on something—as though there were lots of wonderful things to catch
sight of in this courtroom. Though as far as Eddie can see it’s just the usual floating courtroom sewage.

She tells the court, “I’m a single mother, Your Honor. And I’m trying to be a sculptor? I have, well, just a job in the day,
and when I get home I take care of my son. Then at night, at night with whatever time I’ve got left I work on my pieces. I
mean it’s tough to find any free time. I feel ignorant saying I don’t keep up with the news, but that’s how it is, I don’t.
I don’t have time.”

She must come from some other planet, thinks Eddie. From some place where they’ve all got eyes like that, and they all work
hard and take care of their little boys and make art at night, take out their chisels and make
sculptures
for Christ sake—until one day one of them gets in her rocketship and comes halfway across the universe and lands here in
this pit of shit and doesn’t even know enough to be
scared.

Unpretty: An Unloved Ones Prequel by Kevin Richey
Everfound by Shusterman, Neal
Know the Night by Maria Mutch
Stevens-Journey [Brac Pack 20] by Lynn Hagen
The Mystery of the Emeralds by Kenny, Kathryn
Slow Way Home by Morris, Michael.
Qissat by Jo Glanville
About That Night by Norah McClintock
Safe (The Shielded Series Book 1) by Christine DePetrillo
Carol Ritten Smith by Stubborn Hearts