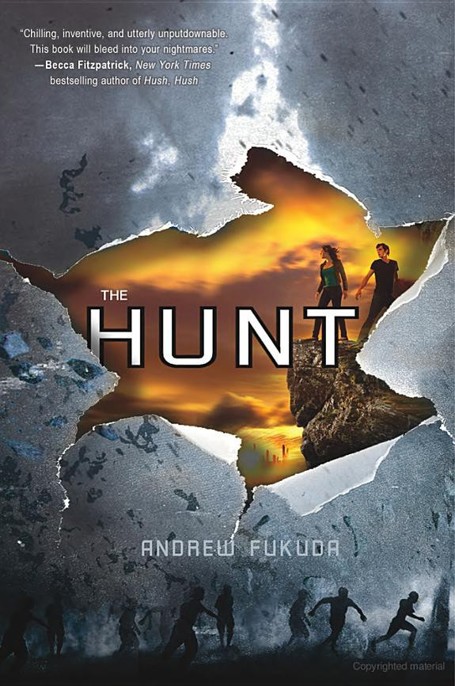 This is a work of fi ction. Al of the characters, organizations, and events por-trayed in this novel are either products of the author’s imagination or are used fi ctitiously.

THERE USED TO be more of us. I’m certain of this. Not enough to fi l a sports stadium or even a movie theater, but certainly more than what’s left today. Truth is, I don’t think there’s any of us left.

Except me. It’s what happens when you’re a delicacy. When you’re craved. You go extinct.

Eleven years ago, one was discovered in my school. A kindergarten student, on her fi rst day. She was devoured almost immediately.

What was she thinking? Maybe the sudden (and it’s always sudden) loneliness at home drove her to school under some misbegotten idea that she’d fi nd companionship. The teacher announced nap time, and the little tyke was left standing alone on the fl oor clutching her teddy bear as her classmates leaped feetfi rst toward the ceiling. At that point, it was over for her. Over. She might as wel have taken out her fake fangs and prostrated herself for the inevitable feasting. Her classmates stared down wide- eyed from above:
Hello,
what have we here?
She started to cry, they tel me, bawl her eyes out. The teacher was the fi rst to get to her.

After
kindergarten, when you’re free and clear of naps,
that’s
when you show up at school. Although you can stil get caught by 2

Everyone else remains cool, clean, dry. Me? I’m a leaky faucet.

That’s just one of the rules. There’re many others, al of them indoctrinated into me by my father from the time I was born. Never smile or laugh or giggle, never cry or get teary- eyed. At al times, carry a bland, stoic expression; the only emotions that ever crack the surface of people’s faces are heper- cravings and romantic-lust, and I am obviously to have nothing to do with either. Never forget to apply butter liberaly al over your body when venturing out in the daytime. Because in a world like this, it’s a tough task explaining a sunburn, or even a suntan. So many other rules, enough to fi l a notebook, not that I ever felt inclined to write them down. Being caught with a “rulebook” would be just as damning as a sunburn.

that. He’d say al this while giving my nails a quick once- over, making sure that they weren’t chipped or scratched. The rules are now so ingrained in me, they’re as unbendable as the rules of na-ture. I’ve never been tempted to break any of them.

Except one. When I fi rst started taking the horse- drawn school bus, my father forbade me from looking back at him to wave good-bye. Because people never do that. That was a hard rule for me, initialy. For the fi rst few days of school, as I stepped onto the bus, it took everything in me to freeze myself, to not look back and wave good- bye. It was like a refl ex, an insuppressible cough. I was just a kid back then, too, which made it doubly hard.

Minutes later, when he started to shiver, his face shockingly cold to the touch, he stood up. He rushed out the door into the dawn light.

I locked the door as he’d instructed me to do and ran to my room.

I stuffed my face into the pilow and screamed and screamed. I knew what he was doing at that very moment: running, as far away from the house before he transformed and the rays of sunlight became like waterfals of acid burning through his hair, his muscles, his bones, his kidney, lungs, heart.

The next day, as the school bus puled up in front of my house, steam gushing from the horses’ wide and wet nostrils, I broke the rule. I couldn’t help myself: I turned around as I stepped onto the 4

bus. But by then, it didn’t matter. The driveway was empty in the dark birth of night. My father was not there. Not then or ever again.

My father had prepared me to be alone. He knew that day would eventualy come, although I think deep down he believed it was he who would be the last one left, not me. He spent years dril-ing the rules into me so I knew them better than my own self. Even now, as I get ready for school at dusk, that laborious pro cess of washing, fi ling my nails, shaving my arms and legs (and recently, even a few chest hairs), rubbing ointment (to mask the odor), polishing my fake fangs, I hear his voice in my head, going over the rules.

Like today. Just as I’m slipping on my socks, I hear his voice. The usual warnings:
Don’t go to sleepovers; don’t hum or whistle.

But then I hear this rule he’d say maybe just once or twice a year.

day. Every time I shave my legs or hold in a sneeze or stifl e a laugh or pretend to fl inch at a slip of stray light, I am reminded of who I am.

BECAUSE I TURNED seventeen this year,

I’m no longer mandated to ride the school bus. I walk now, gladly.

The horses— dark, gargantuan brutes that came into favor long ago for their game- fi nding ability but are now consigned to puling carriages and buses— can detect my unique odor. More than once they’ve swung their noses in my direction, singling me out, their nostrils gaping wide, like a wet, silent scream. I much prefer the solitude of walking under the darkening dusk sky.

I leave home early, as I do every night. By the time I walk through the front gates, students and teachers are already streaming in on horse back and carriages, gray shapes in a murky blackness.

black). That cuts down on the risk of an inadvertent squint. People hate those seats near the lamps— too much glare— so I can always fi nd a seat by one.

I also hate getting caled on in class. I’ve survived by blending in, defl ecting attention. Getting caled on in class puts the spotlight solely on me. Like this morning, when I get caled on by the teacher in trig class. He cals on students more than anyone else, which is why I detest the man. He also has the puniest handwriting ever, and his faint scribbles on the board are near impossible to see in the gray- dark.

My designation changes depending on where I am. In my social studies class, for example, I’m known as D4. “Mind if I pass on this one?” I say.

He stares blankly at me. “Actualy, I do. This is the second time in a week you’ve done this.”

I look at the blackboard. “It’s got me stumped.” I resist trying to make out the numbers on the blackboard, afraid I might accidentaly squint.

He closes his eyelids lightly. “No, no, I won’t accept that. I know you can do it. You always ace the exams. You can do this equation in your sleep.”

Students are now turning to look at me. Only a few, but enough to make me ner vous. Including the person in front of me, Ashley June. Her designation in this class is actualy G6, but in my mind I’ve always caled her
Ashley June
. From the fi rst time I saw her years ago, that designation has stuck.

She turns around, looks at me with her opulent green eyes.

They seem comprehending, as if she’s at last caught on: that I’ve often gazed longingly from behind at her lush auburn hair (the 8

magnifi cent, dazzling color!), wistfuly recaling their silky feel in my hands so many moons ago. She holds my gaze, surprise lighting in them when I don’t fl ick my eyes away the way I’ve been doing for years now. Ever since I sensed her interest in me, ever since I felt a pul in my own heart tugging toward her.

pul in my own heart tugging toward her.

“H6?” The teacher starts tapping the chalk on the board. “Give it a shot, come on now.”

“What’s gotten into you? This is basic stuff for you.” He peers at me. I’m one of the smarter students in school, and he knows that.

Truth is, I could easily be the top student if I wanted to— grades come that easily to me, I don’t even have to study— but I deliberately dumb down. There’d be too much attention at the top.

Let’s work together on this. Just read the question fi rst.”

Suddenly the situation has intensifi ed. But nothing to panic over.

“Guess my brain’s not quite awake yet.”

“But just read the question. That’s al.” His voice now holds an edge of sternness.

Suddenly I don’t like this at al. He’s beginning to take it personaly.

More eyes start to peer back at me.

More eyes start to peer back at me.

Out of ner vous ness, I begin to clear my throat. Then catch myself.

Every Happy Family by Dede Crane
Billy and Old Smoko by Jack Lasenby
Wake for Me (Life or Death Series) by Irons, Isobel
Journey Into Nyx by Jenna Helland
Her Cyborg Awakes (Diaspora Worlds) by Aires, Melisse
Walking in Darkness by Charlotte Lamb
Angel Betrayed by Cynthia Eden
A Stolen Life by Dugard, Jaycee
The End of Doom by Ronald Bailey
The Diva Digs up the Dirt by Krista Davis