Read The Good, the Bad and the Ridiculous Online

The Good, the Bad and the Ridiculous 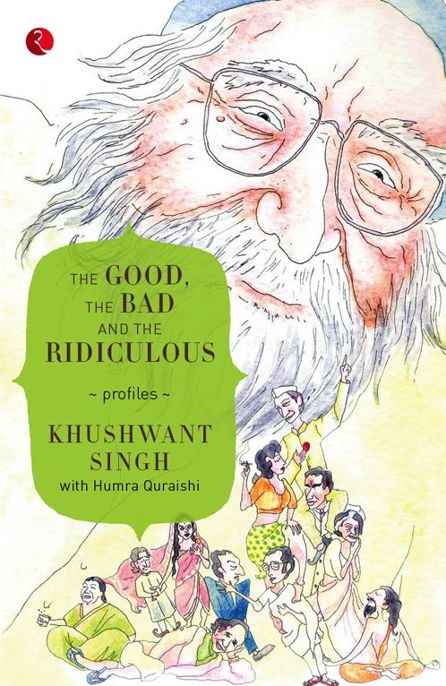 No part of this publication may be reproduced, transmitted, or stored in a retrieval system, in any form or by any means, electronic, mechanical, photocopying, recording or otherwise, without the prior permission of the publisher.

This book is sold subject to the condition that it shall not, by way of trade or otherwise, be lent, resold, hired out, or otherwise circulated, without the publisher’s prior consent, in any form of binding or cover other than that in which it is published.

The Zakarias: Fatma and Rafiq

I have never been a very tactful person. I have never been discreet either. I am a voyeur and a gossip. I am also very opinionated. These are good qualities to have if your aim is to be a writer who is read. You could add to that the extremely useful habit of keeping a diary.

I have met a good number of this subcontinent’s most famous (or infamous) and interesting people. I have also suffered famous bores, and sometimes been rewarded with behaviour so ridiculous that it becomes compelling. One reason why I have found myself around so many well-known people is that I was in professions which made this possible: journalism, law and public relations for India’s foreign missions. Another reason is that my father was a successful contractor and builder and he sent me to schools and colleges where the children of the rich and famous of the day studied. Several of them later became rich and famous themselves.

Through the latter half of my life, I have had the luxury of having some of the high and mighty of India, Pakistan and other neighbouring countries come to me. I have never understood why. It is true that I live in a comfortable flat in one of Delhi’s more pleasant areas, and I am generous with my Scotch. But I also insist that nobody should ring my doorbell unless they are expected, and certainly not before 7 p.m., and then I ask everyone to finish their drinks and bugger off before 8 p.m. Besides, I get easily bored and now, at death’s door, very easily tired. Still, people keep coming to spend time with me. Maybe they have nothing better to do. Or maybe they are being kind to an old man and want to keep him company—even if he would be happier without it.

I have seen prominent people at close quarters or been privy to facts about them that are not widely known. A lot of what I have observed or found out is not flattering, but I have never held back from making all of it public in my columns and books. If what is good in a person can be written about, why not the bad? I don’t do this out of malice, only out of my firm belief in being truthful. I cannot cheat myself or my readers. If I am proved wrong, I will gladly admit my mistake.

I have been criticized most severely for writing uncomplimentary things about dead people. No one seems to disagree with me that the person concerned was a windbag or a liar or a brute. Their objection is that I do not respect the dead. I find this hypocritical. Death does not wipe away the sins of nastiness or idiocy. A man should be judged in death as he would be in life. The truly good and the great are not diminished when their faults are exposed; on the contrary, they earn greater respect for rising to admirable heights despite their very human flaws.

I have no fear of people being nasty to me in print. If I cannot ignore the criticism or venom, I join in the laughter. I wish everyone would do that. Instead, some of them get very angry. And when they cannot do you physical harm or prove you wrong by fair means, they take you to court for libel or worse. I should know. I had this done to me by Maneka Gandhi. She did not like the little that she read of my autobiography in a pre-publication excerpt in
India Today
. She went to court and got a stay on publication. Nothing that I had written was a lie, but it was her word against mine, and I was up against a legal system run by thin-skinned and humourless humbugs. I had to wait some years before my autobiography could be published, and only after some lines were deleted.

I don’t wish to be dragged to court again. Death threats don’t scare me, but I fear court cases that can go on for decades. There is enough in this book to inform, entertain and perhaps shock the reader. But, alas, I cannot name the large lady politician who told me of her passion for Rajiv Gandhi and hatred of Sonia for having cheated her of Rajiv’s love. Nor can I name the overrated poetess who seduced a legendary Urdu poet and songwriter only to find that he could not get it up. I cannot write about the Indian president who pulled out a bottle of premium whisky from under his bed and shared a drink with me. I cannot tell you what I have heard about a central minister’s love of al fresco sex, or a right-wing leader’s dealings with an underworld don.

To read all these stories and more, you will have to wait till I am dead and a suicidal publisher decides to print them. For now, enjoy this book of profiles of the good, bad and ridiculous people I have known over almost a century.

The day Ali Sardar Jafri died in Bombay (1 August 2000, at 8.30 a.m.)—an ironic death in a season of troubled détente—I made it a point to watch Pakistan Television to find out what it had to say about him. Jafri was not only in the front rank of Urdu poets in recent times but also the spearhead of the movement for rapproachement with Pakistan. PTV made a passing reference to Jafri’s death as a poet who wrote of the need for love and understanding between people. I was disappointed. I was also disappointed by the coverage given by the Indian media, both print and electronic. There was more to Jafri than the hastily written obituaries and collages put together to meet deadlines.

I had known Ali Sardar Jafri and his beautiful wife, Sultana, for over thirty years and, during my years in Bombay, we met each other almost every other week. Despite his commitment to communism, Ali Sardar liked the good things in life: good Scotch, good food and comfortable living. He lived in a pokey little three-room flat off Peddar Road. Apart from his wife and three children, who often stayed with him, he had two widowed sisters living in the same apartment. There was not much room to move about and many of his books were stacked under his bed, upon which he read, wrote and slept.

I would arrive armed with a bottle of Scotch; then Ali Sardar would send for soda and biryani from a restaurant, Allah Beli, facing his apartment. I sought out his company because he was one of the most erudite Indian writers I had met. He also had a phenomenal memory. If I quoted a line by any Urdu poet, he would come out with the rest of the poem. And explain every word by referring to Persian poets—from Rumi and Hafiz to Ghalib and Allama Iqbal.

When I set about translating Iqbal’s ‘Shikwa’ and ‘Jawab-e-Shikwa’, I travelled all the way to Bombay to seek Ali Sardar’s assistance. For two days, he and Sultana came to my hotel in the morning; we worked till lunchtime, when Rafiq Zakaria and his wife, Fatma, joined us to find out how it was going. After they left, we resumed our labours till it was time for our sundowners.

I often needled Ali Sardar about his communism. He had been a cardholder and had been expelled from the Aligarh Muslim University (which later gave him an honorary doctorate) and spent eighteen months in jail during the British Raj, and again after independence, under Morarji Desai’s government. Although he had ceased to be a cardholder, he stoutly defended Marxist ideology. What was beyond my comprehension was that despite professing atheism, during the month of Muharram, he often wore black and attended Shia majlis and abstained from alcohol. During a television interview with me, wherein he expected to be questioned about Urdu poetry, I confronted him with his contradictory beliefs in both Islam and Marxism. He was visibly upset and fumbled for words, then took it out on me after the interview was over. He called me everything under the sun, stopping just short of calling me a bastard. Had he not been so obsessed with communism and social problems, I am convinced he would have been a greater poet.

I am a fleeting moment

In the magic house of days and nights;

I am a restless drop travelling eternally

From the flask of the past to the goblet of the future.

I sleep and wake, awake to sleep again;

I am the ancient play on the stage of time—

I die only to become immortal.

Women seduce. That is a fact. I have been seduced by women all my life, right from the time I was attracted to my first love, Ghayoor—it was she who had held my hand. Most women have made the first pass at me, led me on, with the exception of two women, wherein I took the lead. Even when I was attracted to a woman, I had little confidence to make the first move; instead, I was terribly flattered when women made a pass at me. Looking back, I wish I had the confidence to make the first move, for I could have got closer to several women, like the now legendary painter Amrita Sher-Gil. Amrita, you see, had threatened to seduce me. It happened in Shimla in the mid-1930s.

Amrita came into my sitting room (and my life) one day and introduced herself. She told me of the flat she had rented across the road, and wanted advice about carpenters, plumbers, tailors and the like. I tried to size her up. I couldn’t look her in the face too long because she had that bold, brazen kind of look that makes timid men like me turn their gaze down.

She was short and sallow-complexioned (being half Sikh and half Hungarian). Her hair was parted in the middle and tightly bound at the back. She had a bulbous nose, with black heads showing. She had thick lips with a faint shadow of a moustache. Politeness, I discovered, was not one of her virtues; she believed in speaking her mind, however rude or unkind it be.

As a baby, my son, Rahul, was in the playpen, learning to stand on his feet. Everyone was paying him compliments: he was a very pretty little child with curly hair, large, questioning eyes and dimpled cheeks. ‘What can ugly little boy!’ remarked Amrita. Others protested their embarrassment. My wife froze. Amrita continued to drink her beer without concern.