Read The Girl Who Takes an Eye for an Eye: Continuing Stieg Larsson's Millennium Series Online

The Girl Who Takes an Eye for an Eye: Continuing Stieg Larsson's Millennium Series

Praise for
THE GIRL IN THE SPIDER’S WEB

“Fans of Stieg Larsson’s captivating odd couple of modern detective fiction – the genius punk hacker Lisbeth Salander and her sometime partner, the crusading investigative journalist Mikael Blomkvist – will not be disappointed by the latest instalment of their adventures, written not by their creator, Stieg Larsson (who died of a heart attack at the age of 50 in 2004), but by a Swedish journalist and author named David Lagercrantz … Salander and Blomkvist have survived the authorship transition intact and are just as compelling as ever”

“Larsson died before his wildly popular
The Girl with the Dragon Tattoo
came out, but the publisher chose wisely in tapping David Lagercrantz to continue the series with
The Girl in the Spider’s Web.
Not only do the matter-of-fact style and intricate plotting and sexy, chilling atmosphere feel very true to the original novels, but Lagercrantz transcends the source material. He’s the better writer. He worked as a crime reporter and knows our journalist protagonist, Mikael Blomkvist, and Sweden’s troubles well. In this version: A brilliant scientist is murdered. Corporate and government websites are compromised. Cybercriminals lurk in the sordid corners of the night and the Internet. And a severely autistic savant might hold the key to a mystery. It’s a dark, thrilling novel that channels our very real digital vulnerabilities as people, businesses and nations”

“One devours Larsson’s books for the plots, the action, the anger, and most of all for Lisbeth Salander, a character who resembles Sherlock Holmes or James Bond in being so powerful because she is a brilliantly realised myth rather than a psychologically convincing character study. Lagercrantz has caught her superbly, and expertly spun the sort of melodramatic yarn in which she can thrive”

“Last seen vanquishing her half-brother by punching nails through his feet, Lisbeth Salander, the heroine of Stieg Larsson’s
Millennium
Trilogy, is making a comeback – but now with a new author. Since the posthumous publication [in Sweden] of the first book
The Girl with the Dragon Tattoo
in 2005, sales of Larsson’s
Millennium
Trilogy have exceeded 80m copies. Now David Lagercrantz has stepped into the original creator’s shoes to bring the tattooed, vengeful hacker Lisbeth back to life … Mr Lagercrantz displays an innate understanding of the world Mr Larsson created, and has stayed true to the characters of Salander and Blomkvist, who remain impervious to authorial change”

“A skilled novelist in his own right – his books include
Fall of Man in Wilmslow
, about the tragic British computer pioneer Alan Turing – Lagercrantz has constructed an elegant plot around different concepts of intelligence … Lagercrantz’s continuation, while never formulaic, is a cleaner and tighter read than the originals, although he follows the template in building the plot slowly and methodically. He is, technically, a more adept novelist than Larsson, smoothly switching viewpoint in two sections where characters come under threat from assassins. Without ever becoming pastiche, the book is a respectful and affectionate homage to the originals”

“Mr Lagercrantz definitely shares Larsson’s love of Lisbeth Salander, the punkish, tatted waif and hacker whose chief talent is to remind us that revenge is a dish best served piping hot. He keeps her offstage for the opening chapters, but when the dragoness enters the story she speeds it up nicely … But the novel’s overarching evil is greed. A Swedish security cop shudders ‘at the creeping realization that we live in a twisted world where everything, both big and small, is subject to surveillance, and where anything worth money will always be exploited’. This kind of pronouncement is very much in the Stieg Larsson spirit: The rich and powerful are different – they have more money and fewer scruples and need to be knocked into shape by righteous journalists and fearless waifs”

“First, the conclusion. David Lagercrantz has done well. He was set an almost impossible task by Stieg Larsson’s estate when they asked him to write a ‘continuation’ novel featuring Lisbeth Salander. He has carried it out with intelligence and vigour.
The Girl in the Spider’s Web
conveys the essence and atmosphere of Larsson’s
Millennium
novels. He has captured the spirit of their characters and devised inventive plots … On the evidence of
Spider’s Web
, most
Millennium
fans will want to continue following their Lisbeth”

“The plotting is similar to Larsson’s. There is a slow burn, punctuated by bursts of action before a page-turning finale. However, the book never strays into the dark descriptions of violence that punctuate the originals … Lagercrantz could not have fulfilled the commission any more efficiently. The novel leaves much to be said between Salander and Blomkvist and so surely increases the chances of the sequence continuing on towards the ten books that Larsson is said to have originally imagined”

THE
MILLENNIUM
SERIES BY STIEG LARSSON

The Girl with the Dragon Tattoo

The Girl Who Played with Fire

The Girl Who Kicked the Hornets’ Nest

THE
MILLENNIUM
SERIES BY DAVID LAGERCRANTZ

The Girl in the Spider’s Web

I am Zlatan Ibrahimović

Fall of Man in Wilmslow 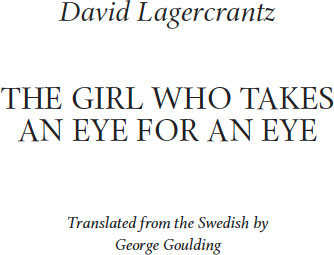 First published in Great Britain in 2017 by

An imprint of Quercus Publishing Ltd

Published by agreement with Norstedts Agency

All rights reserved. No part of this publication may be reproduced or transmitted in any form or by any means, electronic or mechanical, including photocopy, recording, or any information storage and retrieval system, without permission in writing from the publisher

This book is a work of fiction. Names, characters, businesses, organizations, places and events are either the product of the author’s imagination or used fictitiously. Any resemblance to actual persons, living or dead, events or locales is entirely coincidental

Praise for
The Girl in the Spider’s Web

Map of Stockholm and suburbs

Characters in the
Millennium
series

Part I: The Dragon 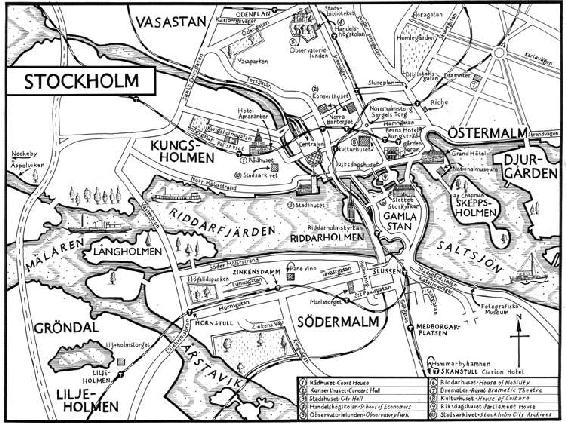 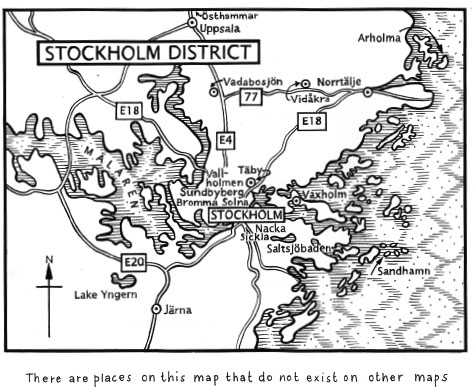 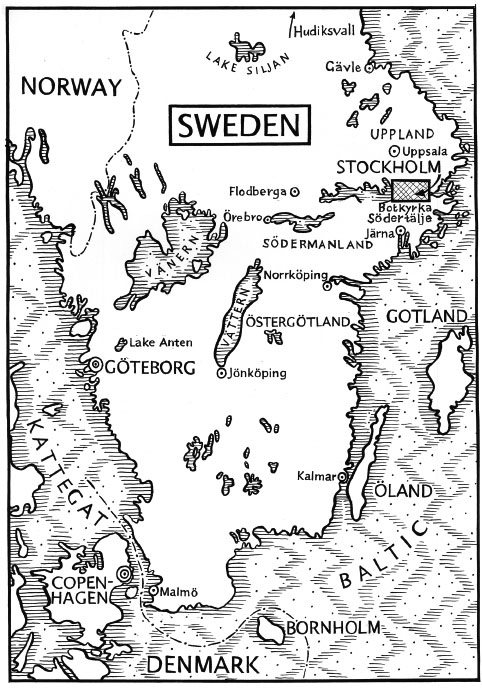