The Girl Who Ate Kalamazoo 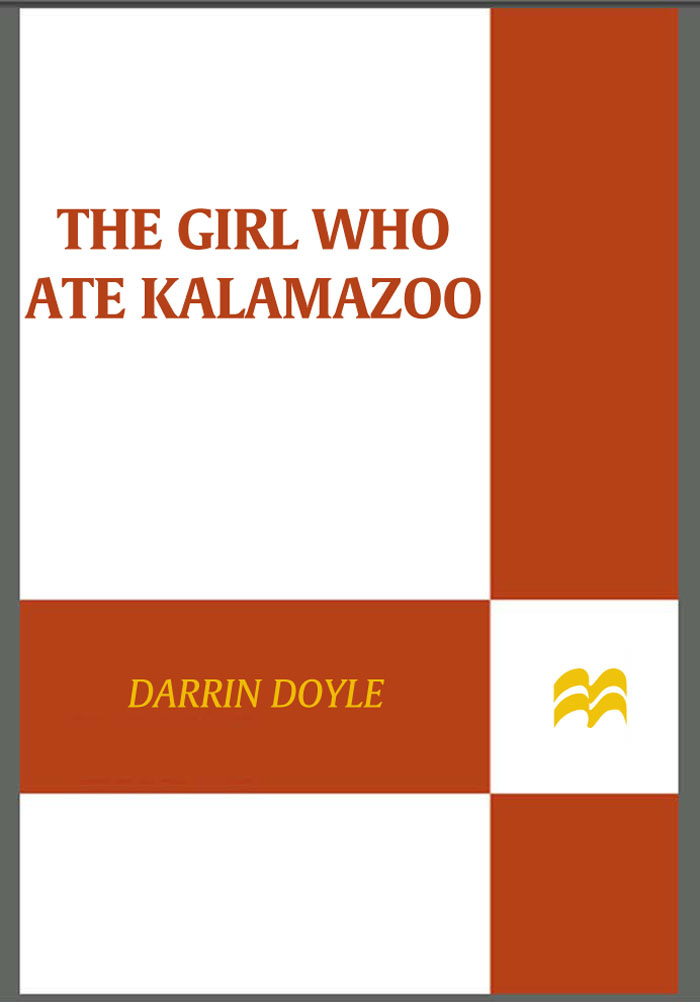 The Girl Who Ate Kalamazoo

Revenge of the Teacher’s Pet: A Love Story

For Simon and Charlie

The author would like to acknowledge the following people and places:

Sara Crowe and Vicki Lame for the faith and hard work.

Christine Schutt for the encouragement.

The grounds crew at Miami University of Ohio for the beautiful landscaping, which provided an idyllic setting for writing a portion of this novel in my notebook.

The city of Kalamazoo for the inspiration.

And of course, McKenna Mapes for finally letting us in.

A Note from the Editor

Many rational people will question the decision to bother the marketplace with another Audrey Mapes book. Certainly, the “Mall City Muncher” has well exceeded her fifteen minutes. Her wonderfully mystifying act—indeed, her life itself—may be remembered less for the benefits to the city of Kalamazoo than the way it turned people off from reading. This is regrettable, but who could blame the common book buyer for running, screaming, from the printed word when the 2000
New York Times
bestseller list was choked, week after week, with nonfiction and fiction titles all dealing with the same little Midwestern bombshell?

No doubt we all recall the torrent of pseudo-biographical, pseudo-scientific, and pseudo-historical accounts of the 1997—1999 Swallowing of Kalamazoo: Maverick Burns’s
The City That Wasn’t and Then
Really
Wasn’t (and Then, At Last,
Was
)
; Cecil Rocheport’s
Audrey Mapes: Chewing the Doors of Infamy
; Dr. Ellen Morose’s
The Mother (and Father) of all Eating Disorders: The Mapes Family Tragedy
.

Mercifully, those floodwaters have receded. And yet, even if they hadn’t—even if dozens of Audrey Mapes books were at press
right now
—I would rush this into print. You see, the book you hold is an entirely different animal than every one that has come before it and any that will likely follow.

A bold statement, to be sure. The truth? Read on.

Like your fellow Americans, you probably didn’t hear about the sale of a private residence last spring. The press never covered it. Why would they? Well, the home stood at 219 Moriarty Street, in Grand Rapids, Michigan. Yes,
that
Moriarty Street. Yes,
that
house. The last occupant moved out, taking with her only a medium-sized suitcase and a 5'× 7' storage crate. She provided instructions with the family attorneys that everything else, the remnants of the estate, be sold at auction and the proceeds given to an undisclosed charity.

The auction received scant attention. The house was left nearly full; only the attic was empty. Little that remained was of monetary value—furniture, dishes, children’s clothing, a set of barbells, lamps, and a tool bench. As everyone knows, the Mapeses weren’t rich. Even after Audrey became a worldwide phenomenon, they never ascended from their lower-middle class station. Almost nothing in the house could even be described as the type of personal effect that would attract fetishistic collectors of “Mapesorabilia.” All of the photographs, scrapbooks, baby books, kids’ drawings, and so on, had evidently been removed—if they ever existed at all. With one momentous exception, what populated 219 Moriarty were the ordinary possessions of an ordinary American family.

Still, if the auction had taken place five years ago, the bidding would have been legendary. A Mapes toaster would have fetched $1,000. A handful of crumbs from the trap: at least fifty bucks, by my reckoning. But now the public has had enough.

There was, however, one curious item on the auction block. Labeled simply, “container of handwritten miscellanea,” it was a nondescript cardboard box, slightly wider and deeper than a case of copy paper. Bidding began at twenty dollars. Within two minutes, it was sold for forty to a Mr. D. M. Doyle. An estate facilitator had rifled through the box just enough to properly designate it, but no more. It was filled with notebook paper—much of it dog-eared scraps, yellowed, torn in two, stained with liquids. Readily identifiable were grocery lists, “To Do” lists, phone numbers, reminders of bill payments. Every sheet featured the same cramped, slanted handwriting.

But no one dug beneath the surface.

Thankfully, Mr. Doyle read every word. What he found among those thousand pages was an undiscovered window, one most thought would never exist: a view into one of the most reclusive and talked about families in modern American history. The surviving Mapeses, of course, are legendary for their fiercely guarded privacy. Not a single interview exists on record. No family photographs have ever been leaked to the press or appeared on the internet.

Mr. Doyle pored over the papers for more than a year. What began as the self-described “voyeuristic romp of a guy with too much time on his hands” evolved, at last, into a labor of love. For he fell in love with the woman behind the words—her personality, her thoughts, her wit, her maddening contradictions, her élan vital.

But unfortunately there was no cohesion to the random jottings. No story. So Mr. Doyle sculpted it, trimmed it, molded it. Gave it an arc. Found the major conflicts. Attached a suitable epigram. Like Doctor Frankenstein, he stitched together the necrotic segments in order to breathe life into the rantings of this decidedly melancholy and plain woman. He rearranged and pruned so that we could
understand.
The original scribbling remains intact, including the writer’s beguiling decision to refer to herself in the third person (most of the time). And so, from this ragged chicken scratch a narrative unlike any other has emerged.

I do not claim to provide the “def nitive” story of Audrey and her family. It is ridiculous to suggest, in fact, that such a version—one safeguarded against the distortions of guesswork, playfulness, subjectivity, mirth, regret, and so on—is even possible. All readers are well-advised to never approach a text—from
The Little Engine that Could
to the Bible—as if it were an indisputable account of an event or, more especially, of a human being.

Let there be no doubt, however, that the author of the work you now hold in your hands is the sister of Audrey Mapes. The sheets of paper were lab-tested and certified; the handwriting was analyzed; DNA was collected and matches were confirmed. The reader can “read easy,” as the phrase goes, knowing that the incidents in this volume have been painstakingly, even painfully, researched—not through interviews and public documents, as has heretofore been the case, but through McKenna’s first-hand life experiences.

However, please be advised that a few critical moments of the narrative do enter into Audrey’s mind, whereupon you will be boldly submerged into the clouded waters of that beautiful young “monster’s” thoughts. . . .

. . . These should be taken as earnest attempts by McKenna to reconstruct (and perhaps to resurrect?) her remarkable sister with the only tools she possesses—her imagination. Rest assured, though, that in every instance of the kind mentioned, McKenna probably had good reason to infer what Audrey was thinking at the given moment.

Kalamazoo, both of us will do a fadeaway.

I will be carried out feet first

And time and the rain will chew you to dust

And the winds blow you away.

—“The Sins of Kalamazoo,” Carl Sandburg

She rubbed sticks of Imperial on her elbows, forearms, shins, and knees. Not always, not every day. Not even every other day. But it felt like always, it felt like every day. Let’s say that four times a week, Audrey the footless toddler slid in a blur across the kitchen floor. She barreled into the wheeled caddie, toppled tin canisters, ignited powdery explosions.

Nobody yelled at her. She was never told, “No.” One of her parents—or, more often, one of her eight-year-old siblings—or, even more often, the meeker, kinder of the twins, McKenna, would dutifully take up broom and dustpan, careful not to mutter any profanity loudly enough that Audrey could hear while she swept away Audrey’s mess and erased the Imperial glaze with a wad of paper towels.

On other days—the in-between ones when she wasn’t lubricating the linoleum—Audrey gave herself a toothpaste mustache and lurched through the house on crutches while reciting the Pledge of Allegiance in the voice of Groucho Marx, who she’d never actually heard but who her daddy imitated in the basement when he was in the best of moods. This was a preschooler, mind you. She had the makings of a star, even then.

Another source of fun for Audrey was filling her right ear with cream cheese and letting Snoodles the basset hound puppy lick it clean. An hour later, still half-deaf, Audrey would slap her cheeks with handfuls of baking soda before climbing, confident as a shirpa, onto her daddy’s lap.

They weren’t bank statements. Murray Mapes was seated on the couch, surrounded by papers—notes, drawings, schematics, the occasional hardware store shopping list—all hand-scrawled in blue ballpoint and legible only to his eyes. He had trained himself to call any important piece of paper a “bank statement” to kill any interest his children might have in what he was doing. He wanted, above all, to be left alone with his equations and crude sketches. Whereas the twins had learned, from nearly a decade of practice, to respect this dream of their father’s, Audrey had only learned how to eat dirt, Play-Doh, crayons, and paper. That and how to walk on flattened soda pop cans.

Audrey would kiss her father’s face, persisting through his weak objections until his light-blue work shirt was speckled with powder and his three-day scruff was white as the snow on the front lawn (more accurately, “front patch of grass”—five-minute mow time).

“Why do you hate me?” Audrey would ask, after he’d calmly gripped her shoulders, lifted her, and set her back onto the carpet.

“I don’t hate you. I hate the idea of you.” He pretended to return to his papers, but it was easy to see that his sideways glance was trained on Audrey’s legs, on the careful rigging of straps, mounts, and clamps designed to stabilize the two Dr Pepper cans upon which his three-year-old precariously balanced.

Unflappable, Audrey mounted her dad again, stepping with her aluminum feet upon his thighs. The patches of baking soda made Audrey’s cheeks resemble skin grafts, or the makeup attempts of an ill-trained clown. She gripped Murray’s shoulders, mimicking what he’d done to her. She shook him, gently (in a silly way, no threats—even at such a young age, she recognized her provider).

“You’re a wonderful
thought
,” he answered, licking the sweat from his lip. “An amazing gesture. A spectacular plan. A perfect theory.”

(It’s disingenuous to imply that this dialogue actually occurred when Audrey was three. It’s true that Murray uttered these exact lines, but only once, many years later, moments before a furious, split-lipped, twenty-year-old Audrey, employing a dramatic high-step she’d learned by observing high school color guard practice from the sidelines, marched through the living room on her nationally recognized $30,000 prosthetic feet [designed by MIT graduate students], out the screen door, across the front patch of grass, and to the street, where she tossed her tortoise shell suitcase into the trunk of her Porsche and sped away to ingest the city of purple-capped lumber yards and railroad tracks.)

Normally, when Audrey asked, “Am
I
a bad idea?” her father answered:

“Your eyes are burnt matches. Your hair is a scented galaxy where time stands still. Your mouth can’t be real, unless God, who doesn’t exist, has performed a miracle and sent to Earth not a bearded savior but a pair of strawberry lips and teeth as crookedly perfect as wave-battered rocks under a maizy sun where no man could fear death. Now get the hell off my lap! I’ve got work to do.”