The Dragon Savior of Tone: World of Tone: Book 2 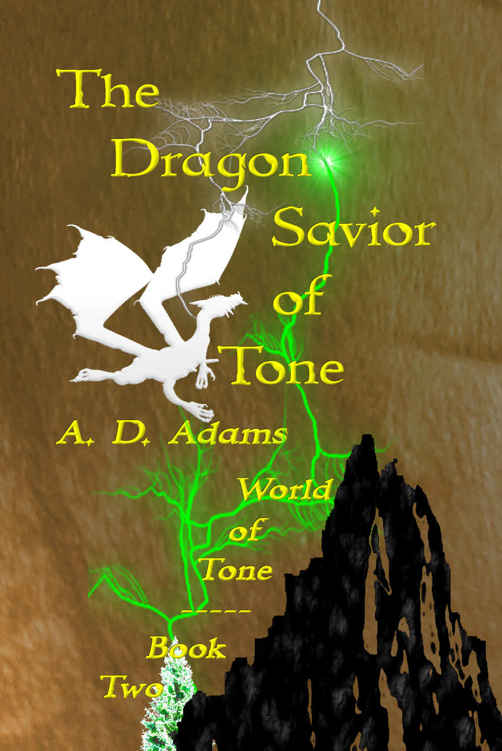 All rights reserved. No part of this book may be reproduced, stored in a retrieval system or transmitted in any form or by any means without the prior written permission of the publishers, except by a reviewer who may quote brief passages in a review to be printed in a newspaper, magazine or journal.

This is a work of fiction. Names, characters, corporations, institutions, organizations, events or locales in this novel are either the product of the author’s imagination or, if real, used fictitiously. Any resemblance to actual persons (living or dead) is entirely coincidental.

This book is dedicated to my parents, a man and woman that worked their entire lives to make my life better.

A Thought for the Reader

Look to the world around you for the dreams of your parents.

Behold realms of life that they have provided for you.

Envision places of love they gave without demand.

For only you shall possess your world through their love.

A Thought for the Reader

Map of The World of Tone

Map of the Northern Coastal Valleys of Tone

Chapter 1 - The Age of the Draman

Chapter 4 - The Gathering of Power

Map of the Lakes of Tone

Chapter 18 - The Many, Start to Become One

Chapter 22 - A New Home for Cardana

Chapter 25 - Rammy and the Dragons

Chapter 30 - A Time of Peace before the Storm

Map of the Northern Dark Plains of Tone

Chapter 35 - Travel to the Unknown

Chapter 40 - The First Sun-Rising of the Great Journey

Chapter 41 - The Story of the Elves

Chapter 45 - The Dwarfs and Elves Prepare, The Trees Wait

Chapter 50 - A Solan Meets Her Victims

Map of the Dark Mountain Region of Tone

Chapter 56 - Death of a Village

Chapter 59 - The Journey into Darkness

A Thank You to the Reader

Other Books Available from A. D. Adams 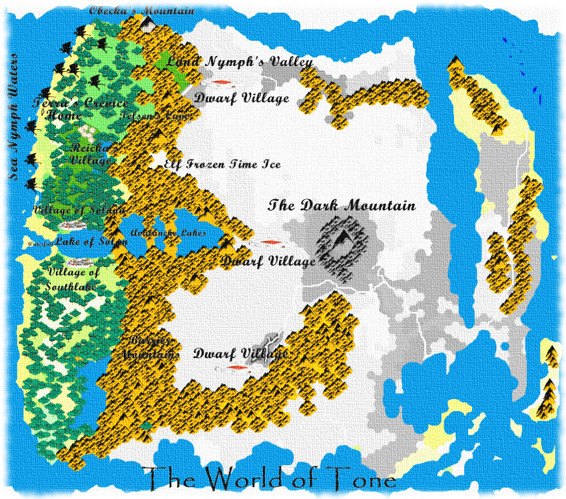 Map of The World of Tone

My name is Kacaba and I wrote the original narrative history covering the life of Terra and his mate, Fienna. The great Master Scribe Soto assigned three students to create independent manuscripts from which he picked one as the book for our people to use as a historical guide. He picked the one written by my friend Kasaca. It was basically straight facts and, if I may say, a bit dry and possibly even difficult to read.

Unfortunately, many in the world have no desire to read or study it. My first manuscript was a story that only concerned the lives of Terra and Fienna up to the point that they began to affect the lives of all on Tone. I ran out of time at this point and handed in what I had completed. Soto realized that a text not read is worth less than the paper it is written upon, and has asked me to complete my history, due to its popularity.

It seems that all who have seen my first history prefer it to all existing writings about our past. Many began to request copies of my version. Since that time I have been made a full scribe and I hope that this volume is as well received as my first. It will cover the remaining history of Terra’s great efforts to save our world. I thought that it would be of benefit if I give a brief overview of my first volume. This was both to give the reader a point of reference and to allow myself a bit of review. I do feel that the reader should actually read the first historical volume “The Dragon Healer of Tone.” It is always best to know the past in order to understand the future.

To assist the reader in determining when Terra and Fienna communicate through their mental connection, I have slanted the letters to indicate thoughts rather than verbal speech.

Terra, the first male born with the magic of healing since the Great Fight hundreds of set of seasons ago, was taken from his family by the Averons. Obecka, the only known surviving Solan of Tycarr, created these great, hideous, flying beasts in a fit of madness. The Solans had once been the saviors of humankind, numbering in the hundreds. After the Dwarfs had driven the humans from the interior of the single great continent, only four Solans remained to defend the humans from the evils of the world. Obecka was born, making them five. She grew to become hated by the people she was born to protect. This was due to her overbearing and demanding manner and complete disinterest in anyone, but herself. She eventually caused the death of the other four Solans. Obecka’s guilt over the killings drove her to insanity. It was said that this violent act caused the blood of the four slain Solans to evaporate into the valley mists. This gave the mists the magic that protected the humans from those who would harm them.

Terra was taken from his parents while on a trip to visit an old woman whom they thought would help them understand their son’s power. As they returned home, a group of Averons attacked the small family and one Averon carried Terra off by his rope belt. Soon it was flying through the Great Barrier Mountains that separated the coast from the vast interior of the continent. A male dragon named Lowlack was flying in the mountains looking for food. The food was not for him, but for a young dragonette named Fienna, who had been injured during a fall. The mother dragon, Dawra, was taking care of her child while Lowlack went for food. The Averon saw Lowlack and panicked, dropping the child to its probable death. Lowlack saw the small object dropping and swooped down, grabbing Terra in midair as the Averon flew off.

Lowlack returned to the cave with his prize and dropped it in front of the young dragon. The young human saw that the small beast was hurt and extended his glowing orange hand, healing the dragonette. A strong connection immediately developed and their minds merged forever, allowing them to know each others thoughts without speaking. Fienna jealously protected her new friend from her mother, Lowlack, and all others who cared to harm Terra. Soon Dawra became used to the young human; after all, he had healed her first child. For without him Fienna would have died from her injuries.

Terra and Fienna had made friends with the sea nymphs, a race that lived in the oceans, though they had met under less than pleasant circumstances. The daughter of the king of the sea nymphs saw the young human in a lagoon and was goaded by other nymphs into attracting him into the sea with her beauty and song. Terra approached the nymph while Fienna was sleeping in the warm sands. As he did, she reached out with her hands, which then changed into tentacles. Terra’s magic caused his body to immediately begin to glow orange. This glow of protection created an explosion of pain within Setilan, the young sea nymph. Slipping into unconsciousness from the pain, she fell onto the sharp rocks below her. She was dying from her wounds. Terra’s gentle spirit caused him to heal her, even though she had tried to harm him. The king and the nymph race soon grew to respect and love the young human as well as his dragon protector, Fienna. Terra, in turn, befriended the sea nymphs.

Duty to Love by Morgan King
Twist Me by Zaires, Anna
Demon Rumm by Sandra Brown
The Highlander's Bride by Michele Sinclair
First Kill by Lawrence Kelter
South of the Pumphouse by Les Claypool
The Psychology Book by Unknown
The Last Days of Jack Sparks by Arnopp, Jason
The Offering by Angela Hunt
Stronghold by Paul Finch