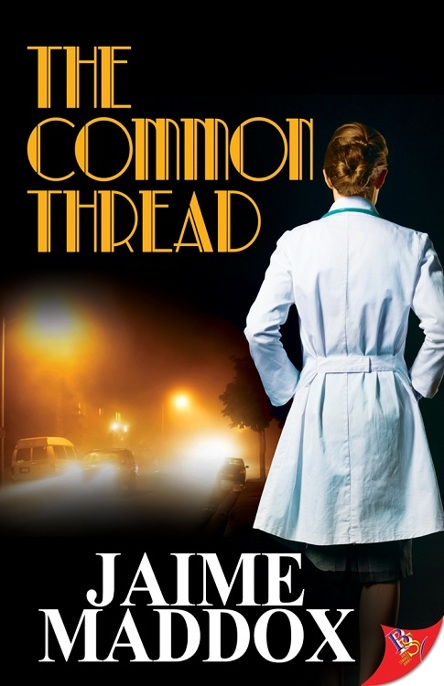 Dr. Nicole Coussart and Katie Finan seem to have no common thread, but the one they discover will change both of their lives. Nic has lived a privileged life as the only child of two physicians, but she’s not happy. Her career as an ER doctor isn’t just like on TV, and she’s convinced she’ll never find a woman who lives up to her high expectations. Katie has struggled since running away from home as a teenager. Now the father of her children has been shot and the killer is after her. As these two women’s worlds become tangled, a secret is uncovered that sends Nic spinning into the arms of DEA Attorney Rae Rhodes. Rae helps Nic make decisions that redefine her life as she learns to live and laugh and love for the first time.

Brought to you by

eBooks are not transferable. They cannot be sold, shared or given away as it is an infringement on the copyright of this work.

Please respect the rights of the author and do not file share.

This Electronic Book is published by

This is a work of fiction. Names, characters, places, and incidents are the product of the author’s imagination or are used fictitiously. Any resemblance to actual persons, living or dead, business establishments, events, or locales is entirely coincidental.

This book, or parts thereof, may not be reproduced in any form without permission.

So much of who I am and who we all are is completely out of our control. It’s fate, or luck, or destiny, but it has nothing to do with us and everything to do with the environment into which we were born. So, I would first like to express my eternal gratitude to the God or Goddess who sent me to the right place, at the right time, and to the right family. I feel rather fortunate that it’s all turned out okay.

It’s been a while since I’ve called Philadelphia home, and although I can still find my way to Dalessandro’s for a cheesesteak, I needed a little help with navigating the landscape of today’s Philly. Thanks to my BFF, Jim Renna, for all his help in that regard. My alpha readers are two dear friends, Nancy McLain and Margaret Pawling, so not only do they help me with my writing, they do it over lunch. My notes have been, on occasion, written on cocktail napkins. Thanks to them for their encouraging critiques. Much thanks and appreciation also to Carsen Taite for reviewing the courtroom scene to make it more realistic.

The staff at BSB is professional and make this easy, and I would like to thank them all—Rad, Sandy Lowe, Cindy Cresap, Stacia Seaman, and everyone else for the their work on getting the design and printed pages ready to go. I had no idea in my mind about this cover, so thanks to Sheri for her vision. Most especially, thanks to Shelley Thrasher for her editing prowess. She’s like a shot of lidocaine to ease the pain.

Finally, all my love and gratitude go to the three people who share my house and continue to tolerate me while I write and travel to faraway places in my mind. Carolyn, Jamison, and Max really rock.

Yankee: A dedication to you could be longer than the book itself, so I’ll get to the point.

Thanks for keeping it interesting. I love you.

Chapter One
Shots in the Dark

Billy Wallace rolled off Katie Finan and let out a loud groan. A well-placed knee to the groin had him reconsidering the direction his hands had been taking. They were now off Katie’s breasts and hanging before him, a belated attempt to protect his manhood.

“What the fuck are you doing?” Katie screamed at him, as the adrenaline coursing through her veins roused her from sleep. In the span of a single breath she was transformed from unconscious to wide-awake, an ability developed during her old days on the streets. She’d spent enough time in bad places to learn self-preservation skills like sleeping lightly and groin kicks. Predators often struck in the dark of night, coming for her money or her food, or something else. Like Billy, she often sent them away moaning in pain. Often, but not always.

Pulling her knees to her chest, Katie flipped her head and threw her mane of black hair over her shoulder. As she leaned against the bedroom wall she studied Billy. What was she going to do about him? Placing the fifth finger of her right hand into her mouth, she began to gnaw at the nail.

He’d knocked on her door a few nights earlier, fresh out of jail and with no place to spend the night. A year had passed since she’d last seen him, almost five since they’d last shared a bed, but how could she refuse him a place to sleep? Billy had taken her in when she was homeless, fed her and clothed her and kept her safe. He’d really asked nothing from her then, not even sex, and rarely asked for anything over the years. He usually had an ample supply of cash, every dollar illegally earned from selling drugs, and when things were going exceptionally well, he showered unwanted gifts on her and their children, trying to atone for all his inadequacies as a father and partner.

He propped himself against the dresser, breathing deep. Even doubled over, he was a big man, almost twice her size, and his presence seemed to fill the small room. Other than the dresser supporting him, the only other piece of furniture was the double bed, its blankets now on the narrow strip of floor separating them. She understood why people feared him. If he peeked up, his face would be handsome, but his good looks hid a lot of ugliness inside. His temper was well known, and in an instant his smile could turn menacing. No one crossed Billy, except for Katie. She’d never accepted attitude from him, had demanded to be treated with respect, and to her, he’d never been anything but kind.

Suddenly, she felt a twinge of guilt for the plans she’d been making. She’d found another apartment here in Philadelphia, more modern, in a better neighborhood, with a bigger yard for the kids and a cozy porch overlooking it. In a few days she’d sign the lease, making a move that was as spiritual as it was physical. She was leaving this life, and all she’d been here in this neighborhood, and moving on. She’d never look back. If Billy had been released from jail any later, he’d have come here looking for her and found the apartment vacant, or with new tenants who’d have turned him away into the night.

Was that so wrong? They weren’t together as a couple, and he’d never been a great boyfriend or father. In fact, she’d already really left him five years earlier, when she moved out of his place. Tired of drug deals and parties, infidelity and broken promises, and wanting a better life for her children, she’d found her own apartment. It had been a big blow to his ego, but he’d been man enough to allow her to walk away without a fight, admitting to her that she was doing the right thing for their kids.

Katie had spent the years since then gaining a confidence and independence she didn’t have when she first met him. A job as a nursing assistant at the clinic gave her an income and helped her to develop self-esteem. Her coworkers were intelligent people—physicians, nurses, x-ray technicians, business women—and they spoke and dressed and acted in a manner Katie had forgotten existed. It came back to her, though—proper English, respectful interactions, manners, and dress—and after a few months at the clinic she felt as if she’d never left home.

Over the course of their time apart, Katie had slowly come to understand that she wasn’t in love with Billy. Now that she was beginning to understand what real love could be like, she was beginning to wonder if she’d ever really loved him at all. Billy had been good to her when she needed someone to protect and shelter her. He’d taken care of her, and she cared for him, but she now questioned whether she’d mistaken much-needed affection and attention for love.