Read The City of Pillars Online

The City of Pillars 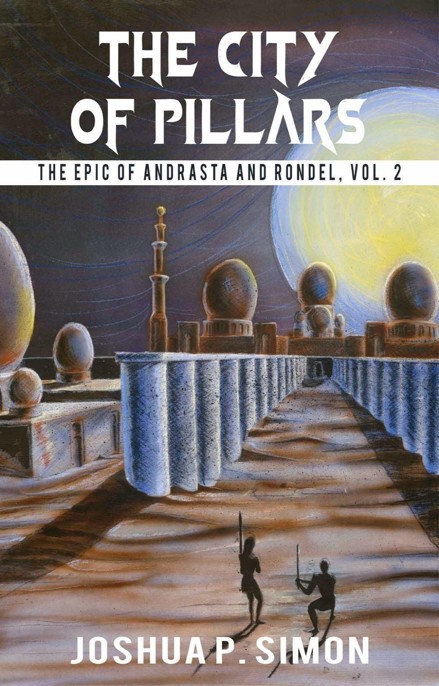 The City of Pillars

The Epic of Andrasta and Rondel, Vol. 2

These stories are works of fiction. Names, characters, places, and incidents are either products of the author’s imagination or used fictitiously. Any resemblance to actual events, locales, or persons, living or dead, is entirely coincidental.

No part of this publication can be reproduced or transmitted in any form or by any means, electronic or mechanical, without permission in writing from Joshua P. Simon.

Visit the author at
joshuapsimon.blogspot.com
.

Works Available in the Epic of Andrasta and Rondel

The City of Pillars, Vol. 2

The Tower of Bashan, Vol. 3 *Forthcoming*

Rise and Fall: Book One of the Blood and Tears Trilogy

Walk Through Fire: A Blood and Tears Prequel Novella

Steel and Sorrow: Book Two of the Blood and Tears Trilogy

Hero of Slaves: A Blood and Tears Novella

Trial and Glory: Book Three of the Blood and Tears Trilogy

Setbacks
, he mused. His mentor, Khalil, never referred to them as defeats or failures lest the men lose heart.
“A failure is something permanent. A setback simply means that you must approach the problem through a different perspective.
”

He stared out at the seventy men under his command. They wore blank looks in response to his explanation of their latest setback.

Blood caked their lamellar armor—small metal plates laced together in horizontal rows over their torso. Dirt covered the black sleeves of their arms. Depending on rank, a stage of the moon rested on the upper portion of each man’s sleeve. Flies buzzed happily around the metal caps protecting their heads in the cool morning light. Their stink hung in the still air.

So thrilled at what they thought was a victory, they didn’t even bother stripping out of their battle gear
.

He squinted at the sun rising behind his men. Its rays bathed the orange sand and red rock around them. It wouldn’t be long before it soaked the desert in agonizing heat.

Maybe the heat will help distract them from my failure. Our . . . setback.

Melek had allowed his men to celebrate well into the night after raiding and seemingly eliminating the largest threat to their cause. Regaining the all-important Mask of Halves was supposed to be a landmark event, a way to not only correct the mistakes of his predecessor, but to take a huge step toward completing the task Hubul had entrusted to the Host millennia ago.

And not a moment too soon. The alignment of the heavens is less than three months away.

He blew out slowly through his nose. Nothing ever worked out as planned. He should have learned that by now.

She
had somehow survived.

“I don’t understand, Captain,” said Lateef, one of the younger recruits. He stood less than thirty feet away from Melek on flat ground at the front of the ranks. The thin, black beard he wore did little to mask his heavy frown. “We scoured the land around their camp. We covered every inch of it on foot. Our sorcerers found nothing.”

“Still, we missed someone. This I know.” He gestured to his head sorcerer.

No one questioned how Melek knew. They had long ago accepted his sixth sense as a blessing attesting to Hubul’s power. Many believed the god’s obvious favor had been partially responsible for Melek’s election to lead the Host three years ago. Khalil had acted as the other catalyst, practically forcing him into the office after the failure of their previous commander.

But after this failure, how many are questioning my ability to command?

“So, we failed,” said another.

“No,” Melek quickly responded. “We did not fail. This is merely a setback. One we will rectify.”

Setback,
he thought bitterly while staring at disappointed faces.
A weak word that does little to soften the blow.

“What are your orders?” asked one of his sergeants.

“For now, rest. More will come at the appropriate time.”

Melek spun away from his men, not giving them a chance to pose another question. He did not want to answer them.

Khalil and Lieutenant Omar, Melek’s second, flanked his sides as he walked away.

Omar cleared his throat and scratched at the thick beard that each day worked to engulf the man’s face.

“Something on your mind, Lieutenant?”

“I want to go on record that I disagree with your approach to this
setback.
”

“You said that earlier. It was noted then.”

“I see no other way. I know you want to chase after her. But we’ll never beat her to Zafar, and you know we can’t enter the city without exposing ourselves to the populace.”

“I don’t see why that matters this once. We’re so close to finishing Hubul’s task.”

“Yes. But Hubul himself put the rule in place that we are never to enter a populated area.”

Khalil interrupted. “Who are we to understand the father of the gods? The holy texts don’t always provide an explanation to our worries, yet we must accept them and place our trust in Hubul’s hands.”

Omar bowed his head, looking embarrassed. “I didn’t mean to question Hubul’s will.”

Melek placed a hand on his shoulder. “We all question Hubul’s will. I think he expects it. But he also expects us to have faith that he knows best.”

“Make sure the men understand this. I know my method for dealing with this setback will not be popular. You’re dismissed. I need to speak with Khalil in private.”

Omar saluted by crossing his arms over his chest and cupping the three quarter moon embroidered over each sleeve with his hands. The moon stage represented his skill and position within Hubul’s Host. Melek was the only member to wear a full moon. As commander, he stood closest to Hubul’s favor.

Melek turned to Khalil. One of the oldest members of the Host, the head sorcerer was not only his closest friend but also a substitute father in some ways. “Has the ghul been summoned?”

“I have it bound in your tent. You just need to give it your commands.”

“And it will obey only me?”

“Sorcery is rarely perfect. Especially when it is done hastily and must be carried out over great distances. You know that.”

“I know you don’t want to repeat mistakes the Host has made in the past, but is this really the only way?” Khalil asked.

“You won’t argue another way then?”

“No. I made sure you won the captaincy at twenty-two for a reason. Despite your youth, I trust you more than anyone else even if you don’t always trust yourself.”

“Even after this failure?”

“Call it what you like. We both know what it is.”

“You will ensure we fulfill Hubul’s mission. Now, hurry.”

Illuminated by a single oil lamp hanging from the top of the center pole, the space contained a bedroll, a small chest, and a couple of bags at the tent’s sides. Few would assume the captain of the famed Hubul’s Host lived here.

The ghul sat in the center of the room in the guise of a hyena, a form often preferred by the demonic race. The ears of the beast stood up when he and Khalil entered. Light blue strands of sorcery danced over its yellowish-brown coat, keeping the creature bound. A cold hate burned behind its dark eyes.

The ghul opened its mouth, and a guttural string of words huffed out of its stubby snout.

“Do not speak the forbidden language in the presence of Hubul’s servants, abomination.”

The ghul chuckled with the voice of a hyena, a high pitched sound that mimicked one choking. “It is the
first
language, fools,” it finally said in Erban. “Abomination. Yet, not so detestable that you can’t find a use for me.”

Melek ignored the creature’s attempts to bait him. “Be silent and listen.”

The ghul tried to speak, but blue wisps of sorcery circled around its snout, clamping it closed. It gave a soft whine.

Melek kept his face blank. “Let that be a reminder that you are bound to me.” He pointed to the ward burned into the creature’s throat. Despite the speed he knew Khalil was forced to use when creating the ward, Melek could not spot a single flaw. “You are allowed two forms only. The one you wear now and the one of the man you last killed. No other. If you shift into any other form, the ward will kill you. You will eat only dead things and kill nothing but animals.”

“You may eat the woman after you’ve killed her.”

The hyena laughed again. “My, but you are a cruel one. Much more to my liking than your predecessors.”

Melek ignored the comment. “Khalil said you know who you’re to seek and where she’s heading.”

“Good.” He gestured to Khalil and the blue strands of sorcery disappeared from around the creature. “Then go take care of her.”

Like most cities in Erba, Zafar was one of shadows. Tall box-like buildings with square windows and arched doorways blocked blistering sunlight from penetrating the narrow and crowded streets. Rondel knew the architecture was born out of necessity as such designs allowed the city’s citizens to survive the scorching sun.

What separated Zafar from the other dots on Erba’s map was that its shadows practically engulfed the city. Only a handful of areas ever saw sunlight and most of those were near the city’s center. During the day, the light on the streets never brightened past a dull gray. At night, it felt like one had to be part feline to see unhindered in the stale, musky spaces.