Read The Chinese in America Online

The Chinese in America 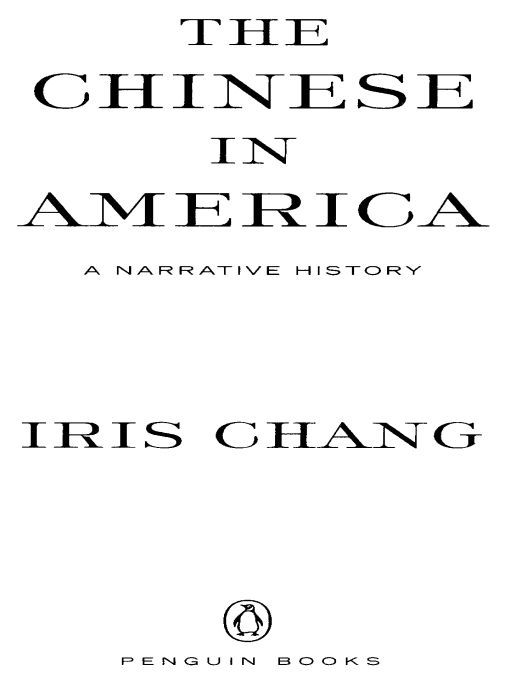 Table of Contents
ABOUT THE AUTHOR
Title Page
Copyright Page
Introduction
CHAPTER ONE - The Old Country: Imperial China in the Nineteenth Century
CHAPTER TWO - America: A New Hope
CHAPTER THREE - “Never Fear, and You Will Be Lucky”: Journey and Arrival in ...
CHAPTER FOUR - Gold Rushers on Gold Mountain
CHAPTER FIVE - Building the Transcontinental Railroad
CHAPTER SIX - Life on the Western Frontier
CHAPTER SEVEN - Spreading Across America
CHAPTER EIGHT - Rumblings of Hatred
CHAPTER NINE - The Chinese Exclusion Act
CHAPTER TEN - Work and Survival in the Early Twentieth Century
CHAPTER ELEVEN - A New Generation Is Born
CHAPTER TWELVE - Chinese America During the Great Depression
CHAPTER THIRTEEN - “The Most Important Historical Event of Our Times”: World ...
CHAPTER FOURTEEN - “A Mass Inquisition”: The Cold War, the Chinese Civil War, ...
CHAPTER FIFTEEN - New Arrivals, New Lives: The Chaotic 196Os
CHAPTER SIXTEEN - The Taiwanese Americans
CHAPTER SEVENTEEN - The Bamboo Curtain Rises: Mainlanders and Model Minorities
CHAPTER EIGHTEEN - Decade of Fear: The 1990s
CHAPTER NINETEEN - High Tech vs. Low Tech
CHAPTER TWENTY - An Uncertain Future
NOTES
Acknowledgements
INDEX
Praise for Iris Chang and The Chinese in America
“Comprehensive, beautifully written, filled with deft and passionate analysis —the definitive book on Chinese American history for a new generation. Iris Chang places today’s Chinese Americans brilliantly into 150 years of U.S. history.”
—David Henry Hwang, Obie and Tony award-winning playwright of
M. Butterfly
and
Flower Drum Song
“A major drama ... Chang’s book is crammed with telling stories not only from the mining camps and Chinatowns of America but from Chinese villages and cities. Chang has found a great subject, and her stories are well worth reading.”
—
The Washington Post Book World
“Valuable for the mirror it holds up to the United States ... Chang’s timely book deserves to be read in homes and schools because it documents well the struggles of one ethnic group to win its rightful place alongside others.”
—
St. Louis Post-Dispatch
“Tells the story thoroughly and with confidence . . . vital to our history. To understand who we are in the early twenty-first century one must know who we were and how we got here. Iris Chang’s book tells one important part of the American story comprehensively.”
—
Los Angeles Times
“As a chronicle of the timeless battle for civil liberties, the book is high, panoramic drama.”
—
The Oregonian
(Portland)
“Informative, thought-provoking and entertaining.”
—Asian Week
“May be the definitive history of the Chinese experience in this country.”
—
The Atlanta Journal-Constitution
“Both a sweeping view and personal stories of what it means to be Chinese in the United States ... [told] in clear, rich prose.”
—
San Jose Mercury News
“[An] engrossing account of Chinese-American struggles and triumphs.... Chang, perhaps the best young historian working today, combines exhaustive research with sheer writing ability to fashion a unique history that has the potential to reach a wide audience.”
—
Ft. Worth Star-Telegram
“If you are hungry for the history of the American experience, The Chinese in America is a must-read. We are fortunate to have the incomparable Iris Chang tell this important and timely story.”
—James Bradley, author
of Flags of Our Fathers
“A remarkable narrative . . . an epic that flows effortlessly and sweeps the reader along for an informative, fascinating and emotional ride.... This book is not just for Chinese Americans but also for all newly arrived immigrants and conscientious citizens that care to appreciate the deficiencies of the American democracy.”
—George Koo, Pacific News Service
ABOUT THE AUTHOR
Iris Chang graduated with a degree in journalism from the University of Illinois at Urbana-Champaign and worked briefly as a reporter in Chicago before winning a graduate fellowship to the writing seminars program at The Johns Hopkins University. Her first book,
Thread of the Silkworm,
told the story of Tsien Hsue-shen, father of the People’s Republic of China’s missile program. Her second, the international bestseller
The Rape of Nanking,
examined one of the most tragic episodes in World War II. Her third and last book was
The Chinese in America,
an epic history spanning 150 years. As one of America’s leading young historians, Iris Chang received numerous honors, including the John T. and Catherine D. MacArthur Foundation’s Program on Peace and International Cooperation Award, the Woman of the Year Award from the Organization of Chinese Americans, and honorary doctorates from the College of Wooster in Ohio and California State University at Hayward. Her work appeared in many publications such as
Newsweek, The New York Times,
and the
Los Angeles Times,
she was featured on numerous television and radio programs, and she lectured widely. She died in November 2004.

INTRODUCTION
The story of the Chinese in America is the story of a journey, from one of the world’s oldest civilizations to one of its newest. The United States was still a very young country when the Chinese began arriving in significant numbers, and the wide-ranging contributions of these immigrants to the building of their adopted country have made it what it is today. An epic story that spans one and a half centuries, the Chinese American experience still comprises only a fraction of the Chinese diaspora. One hundred fifty years is a mere breath by the standards of Chinese civilization, which measures history by millennia. And three million Chinese Americans are only a small portion of a Chinese overseas community that is at least 36 million strong.
This book essentially tells two stories. The first explains why at certain times in China’s history certain Chinese made the very hard and frightening decision to leave the country of their ancestors and the company of their own people to make a new life for themselves in the United States. For the story of the emigration of the Chinese to America is, like many other immigration stories, a push-pull story. People do not casually leave an inherited way of life. Events must be extreme enough at home to compel them to go and alluring enough elsewhere for them to override an almost tribal instinct to stay among their own.
The second story examines what happened to these Chinese émigrés once they got here. Did they struggle to find their place in the United States? Did they succeed? And if so, how much more difficult was their struggle because of the racism and xenophobia of other Americans? What were the dominant patterns of assimilation? It would be expected that the first-arriving generations of Chinese, like the first generations of other immigrant groups, would resist the assimilation of their children. But to what degree, and how successfully?
This book will also dispel the still pervasive myth that the Chinese all came to America in one wave, at one time. Ask most Americans and even quite a few Americans of Chinese descent when the Chinese came to the United States, and many will tell you of the mid-nineteenth-century Chinese laborers who came to California to chase their dreams on Gold Mountain and ended up laying track for the transcontinental railroad.
More than one hundred thousand Chinese laborers, most from a single province, indeed came to America to make their fortunes in the 1849-era California gold rush. But conditions in China were so bad politically, socially, and economically that these émigrés to California represented just a small part of the single biggest migration out of that country in history. Many who left China at this time went to Southeast Asia or elsewhere. Those who chose America were relying on stories that there was enough gold in California to make them all rich quickly, rich enough to allow them to return home as successes, and the decision to leave their ancestral homeland was made bearable only by the promise they made themselves: that no matter what, they would one day return. But most stayed, enduring prejudice and discrimination, and working hard to earn a living, and their heritage is the many crowded Chinatowns dotting America from San Francisco to New York. Of their descendants, however, very few are still laborers or living in Chinatowns; many are not even recognizably Chinese because, like other immigrant groups, their ancestors intermarried. If we restrict the definition of Chinese American to only full-blooded Asians with an ancestral heritage linking them to China, we would exclude the many, many mixed-race descendants of Chinese immigrants.
This is just the beginning of the story. In terms of sheer numbers, the majority of Chinese in America probably have no forty-niner ancestors; they are, as I am, either part of later waves or children of those who arrived here more than a century after the gold rush. Life in China had changed dramatically over those one hundred years and sent a second, very different wave of immigrants. After the 1949 Communist revolution, many bureaucrats, professionals, and successful businessmen realized that their futures were not in China. They packed their belongings, often in extreme haste, and left the land of their ancestors. My own parents and grandparents belonged to this group of refugees. For some the destination was America, for others it was Hong Kong, but for most people, such as my family, the next stop would be Taiwan. These émigrés were devoted anti-Communists who longed to return to their homeland. Indeed, many Nationalist legislators considered themselves the official ruling body of China, now forced by wartime expediency to occupy a temporary capital on an offshore island. However, their children were different. For many young Chinese in Taiwan in the 1950s and 1960s, nothing was more prestigious or coveted than a scholarship to a top American university. The Nationalist government in Taiwan imposed a restriction on those who wanted to study in the United States—they had to be fluent in English.

Rocky Mountain Justice (The Legend of Camel's Hump) by Jeff Noonan
His Witch To Keep (Keepers of the Veil) by Zoe Forward
Carnifex by Tom Kratman
Beware the Solitary Drinker by Cornelius Lehane
Unknown by Unknown
Addicted to Pearls (Revised) (Pearls Series) by Marie, Dani
ARC: Under Nameless Stars by Christian Schoon
The Price We Pay by Alora Kate
Surrendering by Ahren Sanders
Tek Net by William Shatner