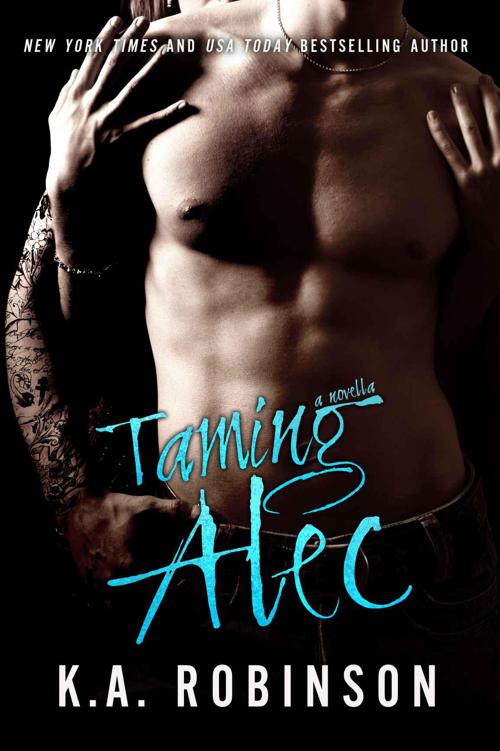 No part of this book may be reproduced or transmitted in any form or by any means, electronic or mechanical, including photocopying, recording, or by any information storage and retrieval system without the written permission of the author, except for the use of brief quotations in a book review.

This book is a work of fiction. Names, characters, places, and incidents either are products of the author’s imagination or are used fictitiously. Any resemblance to actual persons, living or dead, events, or locales is entirely coincidental.

This book is dedicated to my readers. You guys are amazing. I can’t thank you enough for your support and dedication to my books!

“I have no idea why you decided to live
here
,” my mother said as she looked around my apartment, her distaste clear in her expression.

“I like it, Mom,” I said, trying to hide my annoyance.

Anything I picked out or anything I liked was never good enough for her. Never. She’d huffed and puffed for months when I told her I changed my major from pre-med to education. Time and time again, I’d been forced to listen to her lectures about how teacher salaries were nothing more than pocket change.

I wanted to teach. I wanted to make a difference. I wanted to walk into my classroom every day and show my students that learning was important, that they were important. I’d tried to explain that to my mom over and over, but she couldn’t understand my reasons. For a doctor, someone who should be compassionate, she lacked every human emotion I found important.

“What’s to like about it? It’s so…tiny. And look at the appliances, Rebecca. They’re
white.
”

“I’ll be sure to paint them before you come over next time,” I deadpanned.

She scowled at me. She wore that expression most of the time, especially when talking to me. If she smiled once in a while, the world would see how truly beautiful my mother was. But no, that damn scowl made her look cold and older.

With her light-blonde hair, blue eyes, and tiny curves, she was my complete opposite. The only thing I’d inherited from her was my tiny button nose that I hated. I looked like my dad with my black hair, green eyes, and tall frame. At five foot seven, I towered over my mother, who was barely five-three.

When I was a teenager, I’d wished that I had my mother’s build. She was so small and fragile-looking. I had hated my large chest and round hips. I’d felt fat next to her and the small girls I went to school with. My junior year of college, I’d finally accepted myself. No matter how hard I wished I could look like her, I’d known it was impossible, so I’d decided to focus my energy on loving who I was instead of ripping myself to shreds. Big hips be damned.

“Wasn’t trying to be,” I shot back as I picked up a box and carried it back to my new bedroom.

It was always like this between us. My mother ruled my life with an iron fist. She expected me to be the perfect daughter. I’d tried my hardest to please her. While earning perfect grades in high school, I’d been the star of every athletic team, played in the band, and served as the president of the student body and the Christian Club. I never drank or smoked or did drugs. I’d never gone further than kissing a boy. I was probably the oldest living virgin at twenty-three—with the exception of nuns.

But it was never enough for her. Whatever I did, she always found a flaw. She had treated my father the same, eventually driving him away. After the divorce, I’d hated him for a long time. He’d left me completely alone with her when he moved across the country from West Virginia to Washington.

Looking back now, I couldn’t really blame him for running. Hell, I should have run, too, but I hadn’t been able to bring myself to do it. The only thing I’d ever done to defy my mother was getting a teaching degree. I was one hell of a rebel.

When I returned to the living room, my mother was still standing in the same spot, looking at her cell phone. I ignored her as I walked toward the tiny pile of boxes on the floor. Since I was moving out from a dorm and right into a new apartment, I didn’t have a ton of stuff. Sure, I had enough clothes and makeup to keep me going for years, but I lacked everything else.

I glanced back at my mother. Maybe I was being too hard on her. Despite her protests about the apartment, she’d paid my rent for the first six months and put enough cash in my bank account to keep me going until my first paycheck rolled in. I knew she loved me, but she had a shitty way of showing it.

She tore her attention away from her cell phone. “I need to go. Do you need help with anything else?”

I gave her a blank stare. I wasn’t sure exactly how she’d helped me since showing up half an hour ago. She’d watched as I’d unloaded the boxes from her car and mine before I’d carried them up the stairs to my second-story apartment. I couldn’t even say she’d given me moral support since all she’d done was complain about my new home.

I finally said, “I’m good. I only have a few more boxes in my car. I can carry them up on my own.”

She nodded. “All right. Well, have fun. Call me tomorrow, and let me know how your first day of work went.”

I walked her to the door. She surprised me when she hugged me briefly before walking away.

My stomach rolled as I thought about work. Tomorrow would be my first day as an official teacher. I still couldn’t believe that I’d landed a full-time gig right out of college. Sure, I’d graduated at the top of my class, but teaching jobs were few and far between.

When I’d applied at the local high school, I’d expected to be turned down, so I’d been shocked when I was called in for an interview and then when they called me back to offer me the position. That had been a month ago. Since then, I’d gone through a background check, including being fingerprinted, for my new job. After finally being cleared, I’d had a week to rush to set up my new classroom.

I was scared to death of the juniors I would be teaching history to tomorrow. Student teaching was one thing because I’d had a seasoned teacher to help me, but being in charge of a bunch of teenagers sent my heart racing away in terror. I would be on my own, and I couldn’t help but worry that they would eat me alive before the first week was over.

I was still thinking about my new job as I stepped out of my apartment and closed the door behind me. I hurried down the stairs and out to the parking lot where my car was. The black Range Rover was a high school graduation present from my mother. From the moment I’d seen it, I loved it. I’d even declined when my mother recently offered to buy me something newer now that it was four years old. My car was my baby.

I grabbed one of the boxes and carried it up to my apartment. Just as I reached my door, I looked up in surprise when the door directly across the hall from mine opened. A man stepped out and looked up, his gaze colliding with mine.

I stared at him, unable to tear my gaze away from his dark hair, blue eyes, and full lips. He wore a pair of black jeans and a dark gray shirt that hugged his chest. I envied that shirt. I wanted to be that shirt. Tattoos ran down the length of both his arms, and under his lower lip were two piercings. Everything about him screamed bad boy and danger, from the way he held himself to the fierce expression on his face. My body shouted at me to run away while simultaneously ordering me to attack him and rip off his clothes. Lust clouded my vision, and I took a step back.

We watched each other, neither of us saying a word.

Suddenly, he cleared his throat. “You must be my new neighbor. I’m Alec.”

His voice, deep but smooth as silk, pulled me from my stupor.

Feeling like a fourteen-year-old girl with her first crush, I hastily set the box down by the door and held out my hand toward him. “I’m Rebecca.”

He stared down at my hand for a moment before taking it. My eyes widened as a jolt of electricity shot through my body. If he’d felt it, too, he gave no indication. Instead, his eyes swept down my body, stopping briefly on my chest. With his eyes burning a trail across my body, I’d never been more conscious of my curves than I was now. I felt my face warm as I pulled my hand away.