Tales from a Not-So-Fabulous Life 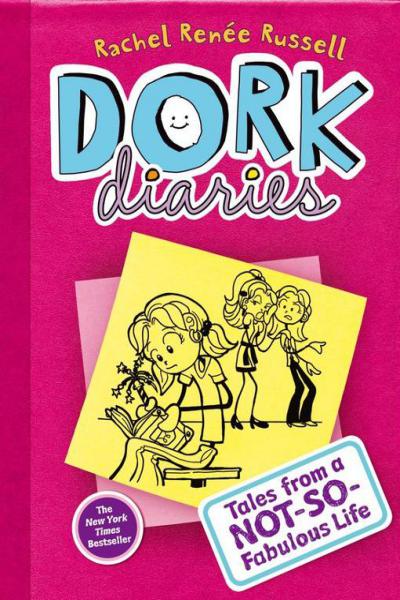 THIS DIARY BELONGS TO:

If found, please return to ME for REWARD! 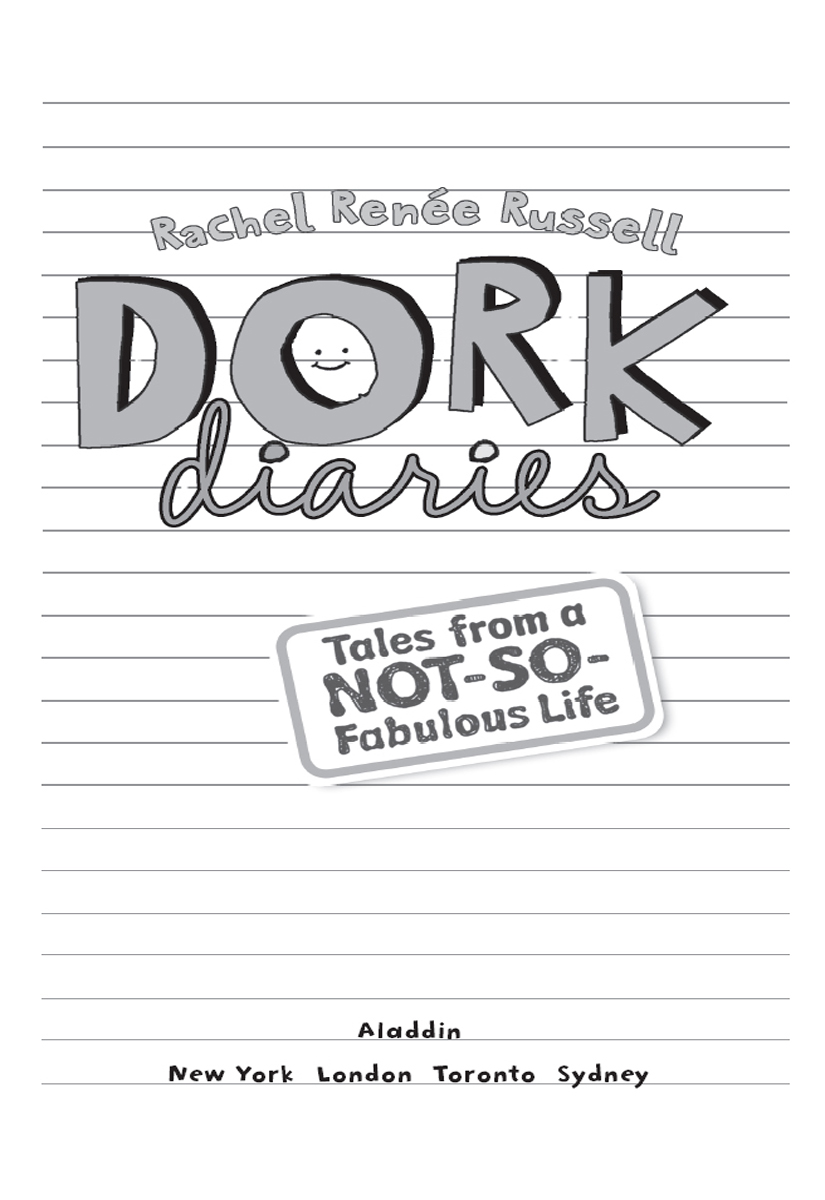 To my daughter, Nikki, who tried her hardest to be the best little ant in the ant colony, when all along she was a beautiful butterfly.

ALADDIN * An imprint of Simon & Schuster Children’s Publishing Division 1230 Avenue of the Americas, New York, NY 10020 * Copyright © 2009 by Rachel Renée Russell * All rights reserved, including the right of reproduction in whole or in part in any form. ALADDIN and related logo are registered trademarks of Simon & Schuster, Inc.

Visit us on the Web:
http://www.SimonandSchuster.com

I would like to thank everyone who helped to make my dream become a reality:

Liesa Abrams, my fantastic editor, for bringing great passion to this project and loving it as much as I did.

Lisa Vega, my super art director, for her keen eye and never-ending patience.

Daniel Lazar at Writers House, my wonderful agent who NEVER sleeps. Thank you for your genius in realizing the potential of this book when it was merely fifty rambling pages about a quirky girl and her fairy godmother. Also, my agents Maja Nikolic, Cecilia de la Campa, and Angharad Kowal at Writers House who are handling foreign rights.

Nikki Russell and Leisl Adams, my very talented assistant artists, whose hard work helped to bring this in under deadline.

Doris Edwards, my mom, for being there through thick and thin and always reassuring me that my writing was funny, even when it probably wasn’t.

My daughters, Erin and Nikki Russell, for their love and encouragement.

Arianna Robinson, Mikayla Robinson, and Sydney James, my tween-age nieces, for being the sweetest, most fab, and totally brutal critique partners an author could wish for.

Sometimes I wonder if my mom is BRAIN DEAD. Then there are days when I know she is.

The drama started this morning when I casually asked if she would buy me one of those cool new iPhones that do almost everything. I considered it a necessity of life, second only to maybe oxygen.

What better way to clinch a spot in the CCP (Cute, Cool & Popular) group at my new private school, Westchester Country Day, than by dazzling them with a wicked new cell.

Last year, it seemed like I was the ONLY student in my ENTIRE middle school who didn’t have one

. So I bought an older, used phone supercheap on eBay.

It was bigger than what I wanted, but I figured I couldn’t go wrong for the clearance price of only $12.99.

I put my telephone in my locker and spread the word that everyone could now call me with all the JUICY gossip on my NEW telephone! Then I counted down the minutes before my social life started heating up.

I got really nervous when two of the CCP girls came walking down the hall in my direction chatting on their cell phones. 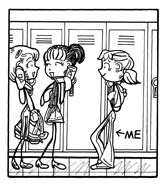 They came right over to my locker and started acting superfriendly. Then they invited me to sit with them at lunch and I was like, “Umm…okay.” But deep down inside I was jumping up and down and doing my Snoopy “happy dance.”

Then things got really strange. They said they had heard about my new $600 Juicy Couture designer cell phone and that everyone (meaning the rest of the CCP crew) couldn’t wait to see it.

I was about to explain that I had said “
juicy
gossip on my
new
phone” NOT “
new
gossip on my
Juicy
phone,” but I never got a chance because, unfortunately, my telephone starting ringing. Very abnormally loudly. I was trying my best to ignore it, but both of the CCP girls were staring at me like, “Well, aren’t you going to answer it?!” 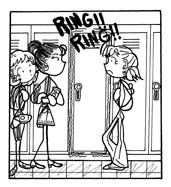 Obviously, I didn’t want to answer it because I had a really bad feeling they were going to be a little disappointed when they actually saw my phone.

So I just stood there praying that it would stop ringing, but it didn’t. And pretty soon, everyone in the hallway was staring at me too.

Finally, I gave in, snatched open my locker, and answered the phone. Mainly to stop that AWFUL ringing. 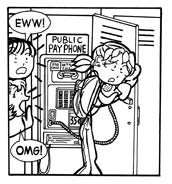 And when I turned around, both of the CCP girls were running down the hall screaming, “Make it go away! Make it go away!” I guessed it probably meant they DIDN’T want me to sit with them at lunch anymore, which really sucked.

The most important lesson I learned last year was that having a CRUDDY phone—or NONE at all—can totally RUIN your social life. While hordes of celebrity party girls regularly FORGET to wear undies, not a single one would be caught dead without her cell phone. Which was why I was nagging my mom about buying me an iPhone.

I’ve tried saving up my own money to buy one, but it was impossible to do. Mainly because I’m an artist and TOTALLY ADDICTED to drawing!

I spend ALL of my cash on sketchbooks, pencils, pens, art camp, and other stuff. Hey, I’m so BROKE, I have a milkshake on layaway at McDonald’s!

Anyway, when mom came home from the mall with a special back-to-school present for me, I was pretty sure I knew what it was.

She rambled on and on about how my attending a new private school was going to be a “stressful time of tremendous personal growth” and how my best “coping mechanism” would be to “communicate” my “thoughts and feelings.”

because you can communicate with a

I kind of zoned out on most of what my mom was
saying because I was DAYDREAMING about all of the cool ring tones, music, and movies I was going to download. It was going to be LOVE AT FIRST SIGHT! 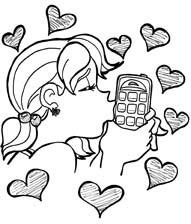 But after my mom
finally
finished her little speech, she smiled really big, hugged me, and handed me a BOOK.

I opened it and FRANTICALLY flipped through the pages, figuring that maybe she had hidden my new cell phone inside. 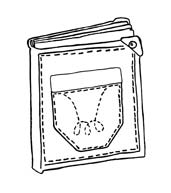 It made perfect sense at the time because all the advertisements said it was
the
thinnest model on the market.

But slowly it dawned on me that my mom had NOT gotten me a cell phone, and my so-called present was just a stupid little book!

Then I noticed that ALL the pages of the book were BLANK.

My mom had given me two things: a DIARY and irrefutable evidence she IS, in fact,

Absolutely no one writes their most intimate feelings and deep, dark secrets in a diary anymore! WHY?!

Because just one or two people knowing all your BIZ could completely ruin your reputation.

You’re supposed to post this kind of juicy stuff online in your BLOG so MILLIONS can read it!!! 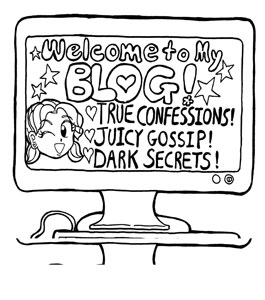 How by Dov Seidman
Free to Live: The Utter Relief of Holiness by Eldredge, John
The Memory Box by Eva Lesko Natiello
Prizes by Erich Segal
From Fame to Shame by Blade, Veronica
Chasing Paradise by Sondrae Bennett
The Heroines by Eileen Favorite
Deadly Reunion by June Shaw
Feeling Sorry for Celia by Jaclyn Moriarty
Cougar's First Christmas by Jessie Donovan