Read The Echoes of Destiny - the Beginning Online

The Echoes of Destiny - the Beginning 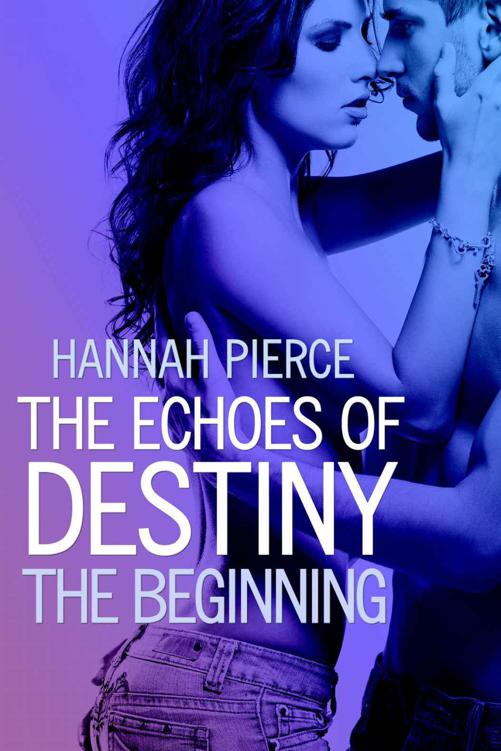 The Echoes of Destiny - The Beginning
(The Echoes
Of
Destiny, Book One)

All rights reserved. Without limiting the rights
under copyright reserved above, no part of this publication may be reproduced,
stored in or introduced into a retrieval system, or transmitted in any form or by
any means (electronic, mechanical, photocopying, recording or otherwise),
without the prior written permission of the copyright owner.

This
is a work of fiction. Names, characters, places and incidents either are
products of the author’s imagination or are used fictitiously. Any resemblance
to actual events or locales or persons, living or dead, is entirely
coincidental.

The author acknowledges the trademarked status and
trademark owners of various products referenced in this work of fiction, which
have been used without permission. The publication/use of these trademarks is
not authorized, associated with, or sponsored by the trademark owners.

This
ebook
is licensed for your personal enjoyment only. This
ebook
may not be re-sold or given away to other people. If
you would like to share this book with another person, please purchase an
additional copy for each recipient. If you’re reading this book and did not
purchase it, or it was not purchased for your use only, then please return to Amazon.com
and purchase your own copy.

“This is
something really
big,
we really need to have some fun
out tonight.”

I looked
over at Shane, my roommate and good friend Shane, who was always looking for
reasons to go out and party, no matter how small the matter was. “You cannot be
serious
Shane,
I can’t drink the day before I start
work at my new job.”

“Why do you
have to be so rigid Dina?” Shane asked. He was seated on a carpet on the floor
of the lounge of our new apartment. The room was strewn with boxes which we had
been struggling to unpack the whole week. Slim, dark haired with deep gray
eyes, Shane looked like he was in excellent shape despite their having spent so
much time putting their new apartment into shape, and I looked at him with
admiration.

“I didn’t
mean that we hit the clubs until morning,” he insisted, “
we
can just have a little wine over the happy hour, and be back before the nine
o’clock news.”

“I’m not so
sure what time I will be back today,” I said motioning to the sweat pants and
workout top, “I
wanna
see how long it will take me to
walk to work, before I head to the gym for a workout.”

“Just try
and make it back on time,” he said, his arched brow making me laugh. He had
been through a lot in his childhood, having grown up without parents in the
tough world, and from what I could see, he was well onto his way in making it
in the movie directing business that he had set up. I could not wait to see his
million-dollar features all over the press when he did.

“Let’s do this
Shane, how about you and I grab a glass of wine tomorrow after work?” I
offered. “Getting through one working day in this city will be enough reason to
celebrate.”

“Settled.
You go along, and I will just finish
trying to unpack this stuff, before I order some dinner for us.”

I took the
private elevator down to the ground floor, and smiled at the doorman as he held
the door open for me to pass. The warm New York air hit me with a bang,
embracing my whole body, bringing with it a sense of excitement and exploration.
I had been used to living in Chicago, and it seemed like two worlds away. The
tall metropolitan buildings and the streets were packed with people who were
full of energy, as I made my way out of the Manhattan neighborhood. I was one
lucky girl despite wanting to start from scratch, because I was from a rich
family and they had gotten for me an apartment that would make even some of the
rich and famous jealous.

The doorman
regarded me as I made my way out, “I hope you enjoy your evening Miss Garcia,
the weather is good for a run.

“Thanks
Jamie, best to enjoy it before the summer kicks in.”

I walked
out of the high end modern building and into the tree-lined street and made my
way to Broadway, a totally different picture. There was lots of traffic
bustling, and I almost felt overwhelmed at the nature of the busy life in the
city. Everyone always seemed to be in a hurry, the endless traffic lines a
nightmare for any driver. It was however exciting to me as I looked forward to
getting to master the streets there. I checked the address on my
hnewew
offices and made my way there.

I could not
wait to explore the city. Everything seemed to always be on the move, hawkers
shouting for people to buy their wares, while police and ambulance sirens
screamed into the air. I was hit by the smell of exhaust fumes from vehicles
mixed with garbage from the garbage collecting trucks as they made their way
through the small lanes. The New Yorkers themselves did not seem to notice
anything strange as they cruised through their beloved city, one which I wished
to become accustomed to very soon.

I
approached my new office block with excitement. I had managed to start from the
bottom, and I had finally gotten a small promotion, and been transferred to the
New York office, which was a major promotion to me, as I was going to be the
assistant to one of the directors there, Sean
Lockermann
.
Daniel & Strauss was a marketing company that promoted anything, from
movies to blue chip companies, and I had joined it two years earlier, just
after graduating from college. My parents had been adamant that I work for one
of my father’s companies, but I would have none of it, and instead chose to carve
out my own niche.

“You
stubborn girl,” my father had chided, “why do you insist on starting so low and
yet we have it all?”

It had been
hard letting my dad and mom let me go, and when they had, I had immediately
left before they could have time to bring in more arguments as to why I should
stay behind and focus on their companies.

I soon got
to the Daniel & Strauss Company building, and pulling the door open, I made
my way into the awe inspiring building. The building was majestic and screamed
money and success, judging from the way that it was tastefully furnished in the
reception area. I showed my ID card to the guards at the desk, and made my way
past them to the bank of elevators at the far end. I was excited at the
prospect of the new job, and I made my way up to the 30
th
floor,
where my new office was located.

After
checking it out, I turned to leave, bumping into someone and spilling all the
contents of my purse to the floor. Embarrassed, as all the receptionists on the
floor were looking at me, I did not bother to look at the man that had bumped
into me, and I bent down to retrieve the numerous change that had fallen out,
my hand running onto a pair of luxurious moccasins that were partly covered by
black designer pants.

My heart
skipped a beat as I looked up towards his face, the designer suit that he was
wearing setting something off in me, but it was not the suit that got the best
of me, but rather the lean muscular body that was in it that really got my
senses going wild. The maleness in the man was extremely getting me excited.
There was something about the man that just want me to have sex with him
immediately, and I swear I could even feel my pussy beginning to twitch in my
panties. As my eyes got to his, I found that I could not pull them away from
his intense gaze. The air drew from my lungs as a certain electric current
passed between us. There was an erotic magnetism that was running between us,
and I felt the strength draining out of my crouched legs, making me fall flat
out on my ass in a seated position.

Great.
Just
great
, making a fool out of
myself
at the
new job before I had even began. I wondered what had just happened before me
and the stranger, and I could not quite place a finger on it. There was just
something about him, something that just made me all hot and horny, and I would
not have hesitated had he asked me for sex there and then. His deep blue eyes
looked deeply into mine, as it finally registered that I was on the floor. I
had been so pre-occupied admiring his manly features. His jet black hair was
tied neatly into a ponytail behind his back, framing the most handsome face
that I had ever seen, while his bone structure looked like one of God’s
masterpieces.

My heart
skipped a beat as I continued to stare at him, my lips parting slightly to take
in more breath as the beat rate grew faster. He also smelled sinfully erotic,
something about his maleness, which got me reeling in a bundle of emotions I
had never experienced before. He stretched his hand towards mine, and under his
cuffs, I spotted a gold watch that was on a hairy wrist, the dark hairs of his
hands making his masculinity even more appealing. I shook myself back to life
once again, the feel of his hand sending a shiver up my spine, and making the
hairs of my body to stand, as I staggered up, too weak to talk. I could not
believe that it was him again. I thought that I had forever blocked him out of
my life, but now he was here, as if like a dream.

I had never
imagined he would resurface and make all of my senses go wild again, just when
I had managed to keep them in check. Two years it had been since I had last set
eyes on him. We had graduated together, and then suddenly he was gone from my
life, from my dreams. His name was Jason, Jason Donovan, a guy I had spent
sleepless nights musing over back in my college days. Now he was here right
infront
of me, pulling me up to my feet.

His voice
was still the smooth cultured voice that I could remember from such a long time
ago, the coarse
raspiness
sending butterflies into my
stomach. Whenever I looked at him and heard his voice, I just thought of great
sex, and I felt like I could orgasm just hearing his voice.

He pulled
me up into a standing position, our eyes still riveted on each other like two
young lovers. He looked as graceful as he always had back in the days in college,
and although I knew that he was 26, he looked much younger. He looked more
intelligent than he had before, although the look in his eyes said that he
probably took even more women than he had to bed nowadays.