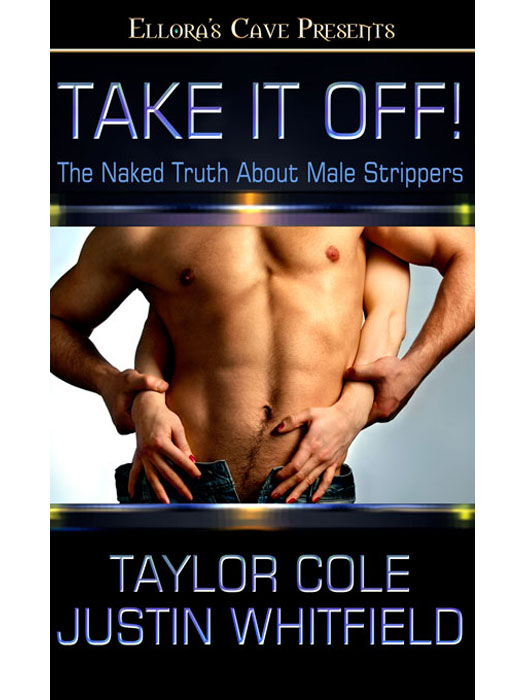 The Naked Truth
About Male Strippers

Ever wonder what goes on behind the
scenes in a male strip club? Are those guys gay? How do they stay so ripped? Do
they stuff their trunks? How did they get into such a business? How much money
do they make? Do they have wild sex every night?

This book takes you backstage and
into the lives of two successful male strippers over a span of twenty years in
the business. From their rookie days to their wild sexcapades and practical
jokes,
Take It Off!
is a laugh-filled, action-packed joyride. 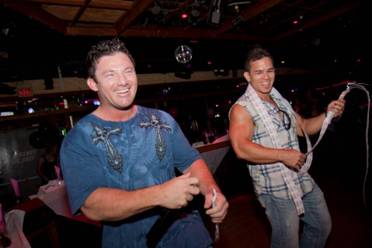 The Naked Truth
About Male Strippers 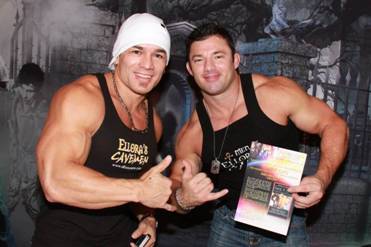 Justin Whitfield and Taylor Cole are the stage names of the
authors of this book. As Ellora’s Caveman cover models, both have appeared on
EC book covers and have entertained our fans at conventions and tradeshows. Over
a span of twenty years, they have worked as male exotic dancers, making most of
their money doing striptease dances for tips from women at a nightclub in
Houston, Texas, augmented by roadshows, strip-o-grams and modeling jobs. They
have danced in Europe, the Caribbean, South America and Canada, as well as at
casinos, on cruise ships and in hundreds of clubs across the United States.
Both have been featured on television and radio, as well as in newspapers,
calendars and magazines.

Taylor has appeared on
Texas Women
, a reality show on
CMT. Justin has won numerous strip contests and bodybuilding titles. He holds a
degree in economics and is the owner of The End Zone sports bar and grill in
Houston, Texas.

They work hard to stay in shape, and even though they have
the bodies of Greek gods, they’re nice, surprisingly down-to-earth guys who
love women and know how to show them a good time.

Much of the book is from the perspective of both authors.
However, some stories, such as those in the Sexcapades chapter, are necessarily
from a single point of view. The authors have chosen not to identify which of
them wrote certain stories, though the reader might be able to guess. 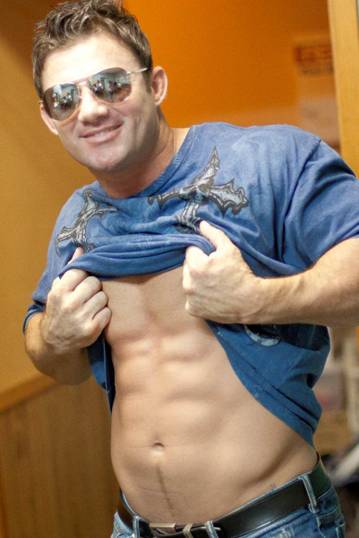 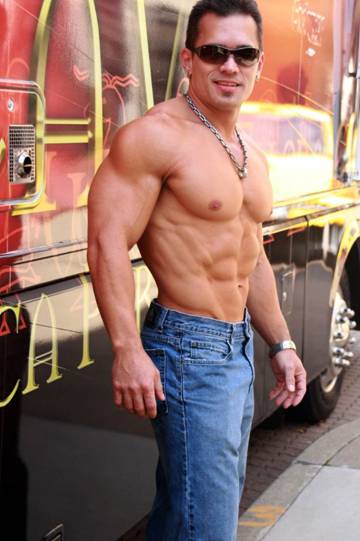 Let’s get something straight right up front: Pretty much
every guy in the world would love being in front of five hundred screaming
women chanting, “Take it off! Take it off!” Every man wants that feeling of
being an alpha male, and every man wants to have women lust after his body.
Call it a side effect of testosterone. Men all think alike. With the wrong head
first. We can’t help it. It’s how we’re made.

We’ve never seen
Jersey Shore
, but we’ve heard it’s
about a bunch of guys who like to work out, tan, do laundry, fight and fuck. We
were doing that way before these guys ever had a hair on their nut sac! We were
the original GTL (gym, tan, laundry) guys, except we weren’t concerned about
laundry. For us, it was more like GTP (gym, tan, PARTY)! We lived in the moment
and it was the most fun part of our lives, hands down! We were able to
experience a taste of fame without ever being famous beyond our own little
world—a nightclub where we entertained women. We had a taste of the rock star
lifestyle without ever being rock stars. Our days were relaxing, working out,
sleeping in and partying.

Of course, not every day was a party. We had to recover.

How does a guy fall into this type of business? Everyone has
his own path—but ultimately it’s about the women and the lifestyle. This book has
true stories from more than thirty-five years of combined experience between us.
We will take you inside a world that is as crazy as Alice’s Wonderland. A world
where women are the aggressors in the battle of the sexes, and men are the
objects.

Ever wonder how a guy becomes a male exotic dancer? What
kind of guy would do that for a living? Do strippers get all the chicks? Are
they gay? We have worked with hundreds of other male exotic dancers, and these
are the truths behind the scenes of what really goes on in their lives. This
book also contains some of the funny stories we have witnessed or heard
straight from the source. Think you know what goes on backstage? You might be
surprised.

Until the seventies, strippers were almost all women
performing for a male audience. Since then, places where male strippers perform
for a female audience became mainstream. Women come in big groups for
bachelorette or birthday parties. Unlike the men’s clubs, which are usually
quiet, dark and private, these ladies’ clubs are normally very loud, rowdy and
aggressive. It’s common for women to get onstage and become part of the show.
They are testing the boundaries of what they can do.

The boom for male stripping was in the late seventies and
early eighties, when Chippendales were making a name for the biz. In Houston,
the oil boom made a lot of wives rich but lonely. A friend once told us about
when he started stripping in Houston. His first impression was seeing a dancer
pull up to the club in a Ferrari, wearing a full-length mink coat.

It’s not quite that lucrative anymore, but it’s a great way
to earn a living for a while for a man who loves women as much as we do.

There are basically two kinds of male strippers—the Las
Vegas-style male revue show, such as Chippendales and Thunder From Down Under,
and the strip club dancers. The show dancers get paid by the week and all make
roughly the same amount. They follow a choreographed routine and usually have
uniform costumes and a similar look and build.

Club dancers bring more individuality to their performances
than show dancers do. Each guy molds his own unique stage character, complete
with costumes, dance moves, music and personality. Each club dancer has to hold
the attention of an audience of hundreds by himself, while the show dancers
perform in troupe. Club dancers also interact with the audience a lot more than
show dancers. We make our money from tips we receive performing onstage and
doing lap dances. Because we rely on tips, there is a huge earning range for
club dancers, whereas the show dancers all make about the same. Also, money in
the club is seasonal. Spring and summer are the rich seasons because that’s
when weddings bring in the largest number of bachelorette parties.

There are also different types of clubs and different levels
of club dancers. There are totally nude, gay and straight clubs. The straight
clubs without totally nude dancers usually have the best talent. The dancers at
these clubs usually have three to five different acts, ranging from solo acts
to acts with five or more dancers in them. The movie
Magic Mike
is based
on this type of club, and it is the same type of club we danced in for most of
our careers. It blew our minds when we saw that movie because it felt like
watching our own lives unfold on the screen. We had already started writing
this book long before we knew about the movie, but the movie did encourage us
to finish the book and tell you about all the wild things that a two-hour movie
cannot show.

We hope you enjoy reading about our experiences as much as
we enjoyed reliving them for this book. The stories are true. The names have
been changed (or in some cases left out) to protect the guilty.

The Ex by John Lutz
Ink Lust by Kingston, Jayne
High School Reunion by Mallory Kane
Mia the Meek by Eileen Boggess
Wrede, Patricia C - Mairelon 01 by Mairelon the Magician (v5.0)
How to Defeat Harmful Habits (Counseling Through the Bible Series) by June Hunt
John Ermine of the Yellowstone by Frederic Remington
The Shark (Forgotten Files Book 1) by Mary Burton
Tears of a Clown: Glenn Beck and the Tea Bagging of America by Dana Milbank
Escape: A Stepbrother Romance by Ashe, Jessica