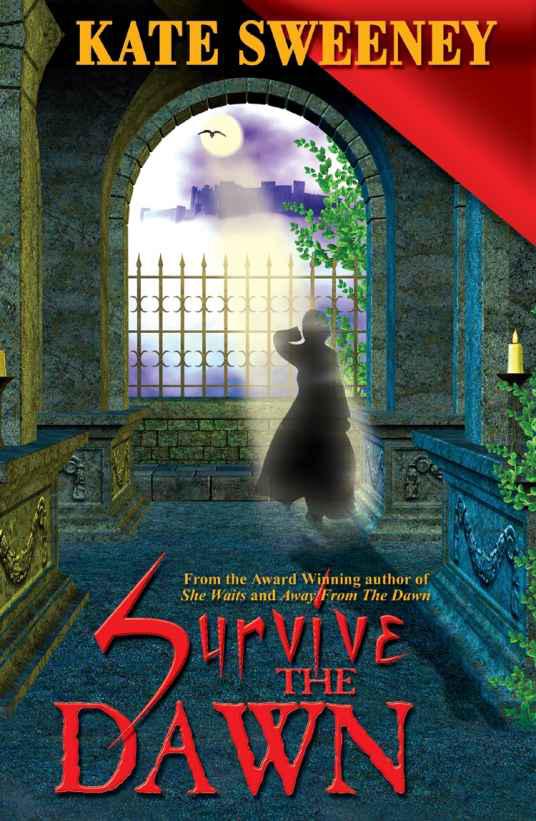 With the serum now in her bloodstream, Dr. Alex Taylor must find a suitable laboratory to continue her work to help the woman—well, vampire—she loves, Sebastian. Together they travel to Devon, England, where Sebastian hoped her, old friend, the flamboyant vamp
Gaylen
Prescott will assist them. All the while, they try to keep one step ahead of
Nicholae
, the elder in the hierarchy, who wants Sebastian destroyed.

They find themselves deep in the catacombs of Guys
Hospital in London and to Kendra, a sultry vamp who knew Sebastian quite well a century before, too well for Alex. Kendra is conducting similar experiments of her own.

Alex becomes a reluctant comrade to this sexy vampire, and together they find a way for Sebastian and her world to
survive the dawn.

All rights reserved. No part of this book may be reproduced in printed or electronic form without permission. Please do not participate in or encourage piracy of copyrighted materials in violation of the author’s rights. Purchase only authorized editions.

This Trade Paperback Is Published By

This is a work of fiction. Names, characters, places, and incidents are the product of the author’s imagination or are used fictitiously, and any resemblance to actual persons, living or dead, businesses, companies, events, or locales is entirely coincidental.

The Trouble with Murder

Who’ll be Dead for Christmas

Away from the Dawn

I’d like to dedicate
Survive the Dawn
to my sister Maureen. She has been, and still is, so supportive of my work. She has spent countless hours at the restaurant listening to my insane ideas and patiently waiting while I scribbled them down on a napkin. And she is a wealth of vampire information, which is
kinda
scary.

Thanks, Mo, for always being there.

As always, thanks to Denise, who tells it as it is, which can be annoying, but I’d be lost without her.

Thanks to Tara and Verda for their wonderful editing skills. And to
Tena
for her constant enthusiasm.

And last, to Sheri Payton, whose love for Intaglio may only be matched by my own.

The hospital guard watched her through the window of the heavy steel door. She lay there, struggling against her restraints, her cries muffled through the thick partition of the locked door.

“She sees bats in the belfry,” he whispered with a chuckle.

David’s dark eyes bore a hole into the guard, who nearly swallowed his gum as he backed up. The guard stopped laughing but couldn’t take his eyes off David’s forehead, either.

“Looks like somebody took a shovel and creased your—”

“Will you please open this door?” David asked in a low voice.

“Sure, you’re the doctor.” He took out his enormous set of keys and flipped through them. “Want some help? She can be a handful. I heard she was a detective or something. They brought her in here a few weeks ago. At first, they thought her body was covered in tiny needle marks.” He rambled on as he opened the metal door. “Then they realized they were bites. Figured she might have been in some abandoned warehouse for so long, rats got at her.”

“Leave us.” David walked into the hospital room as the guard closed the door.

He approached the bed and watched the woman as she stared at the ceiling. Every now and then, she would flinch and move as if dodging something. He studied her carefully for a moment, noticing the thin strip of white hair along her temple. It was a vivid contrast from her short, dark brown hair.

Carey shot him a curious look but said nothing. David smiled sweetly, pulled up a chair, and set his briefcase down beside him.

“What do you want, old man?” Carey asked in a coarse voice. “Who are you?”

“Your savior,” he said with a thin grin. When Carey did not reply, he cocked his head. “You do want to be saved, don’t you, Detective? You want to get out of this hellhole, I’m sure.”

Carey wore suspicion like a second skin. He examined her as she searched his face. “Don’t you?”

David leaned forward and nodded. “Very good. Do you know how you got here?”

“Darkness. The ceiling covered with…” She shook her head rapidly. He didn’t know if she was trying to remember or willing herself to forget; he didn’t know which nor did he care.

“Carey, you can leave this place and walk out of here right now.” David walked to the bed and traced his fingers along the leather wrist restraints. “Do you remember Dr. Sebastian?”

Carey’s eyes widened and she nodded slowly. “I thought you might. She’s with Dr. Taylor as we speak.” He gently tugged on the restraints. “She’s the reason for this, you know that.”

Once again, he noticed her desperation as she tried to remember. He was told enough to know what had happened to her. “Alex was foolish enough to get involved with Sebastian.”

“Yes, I know Dr. Sebastian is behind all of this.”

Her anger mounted while he continued, “And you want her to pay.”

“Excellent.” He untied the restraint, still holding her gaze. “You must do something for me first, Detective Spaulding. It’s a simple task someone of your intelligence and cunning may easily do.”

She watched as he opened his briefcase and took out an oval box. “Do you remember the abandoned warehouse where you found the bodies of those young men? The unfortunate one missing an arm?”

He nodded with approval. “Good, your memory is coming back. That warehouse holds something of great value to those I represent and they want it back.”

“What is it?” Carey asked as she flexed her wrist.

David observed her with curiosity when she snapped her head to one side as if seeing something, then ducked and swatted the invisible object away with her free hand. He raised an eyebrow—perhaps only invisible to him. She then pulled at her other wrist still captive.

“Patience.” He made no move to untie the last bond. He saw the controlled terror in her eyes as she looked around the room. “Dr. Sebastian was in that warehouse, Detective,” he added. “However, what is there is of no concern to you. Getting us into the warehouse is. It is a crime scene. I need a police officer and that’s where you come in.”

Carey watched him walk slowly around the foot of the hospital bed. She gave him a curious look as she swatted at the air. “Why me? Go through the proper
chan
—”

“Don’t ask questions. Right now, you’re looking at spending a good deal of time in this room. I can make sure you leave here now or spend the rest of your life shackled to this very bed, helpless and screaming.” He leaned over her. “Helpless, Detective. Helpless to stop the dreams, the visions of them crawling all over you.” He stopped for an instant. “The choice, of course, is yours.”

David saw terror in her eyes as Carey tried to swallow. He smiled when she raised her bound wrist and whispered, “Tell me what you need me to do.”

The house was empty. Nina walked into the foyer and glanced into the living room before she slowly mounted the stairs. Once at the top, she opened the door to the bedroom. The heavy shutters on the windows closed off the outside world, but again there was nothing else.

“The previous owner was in a hurry to sell,” the real estate agent explained while the tall, willowy woman looked around. “Don’t know why. However, this house didn’t stay on the market long. We sold it in a matter of days. The owner made a bundle.”

“And you have no idea where she moved?”

Her deep brown eyes regarded him with a serious gaze. He looked scared; Nina grinned.

She walked up to him and stood in front on him. “Who would?”

She took a step closer and placed her hand on his arm. “I’m sorry if I seem abrupt, but Dr. Sebastian is a colleague of mine and I need to find her.”

“Yes, I believe you.” Nina gently sniffed the air and looked him in the eye. “And now, you’ve served your purpose.”

He backed up. “What the fuck?”

“Humans.” She snarled as her brown eyes turned blood red. Her fangs protruded and she viscously grabbed him around the neck, sinking her fangs deep into the vein. Blood oozed from her lips as she sucked deeply and drained him.

She carelessly dropped him onto the floor and stepped over the body. She looked around the house one more time. “Sebastian, where are you?”

Nina walked down the steps to the waiting car. The driver dashed around to open the door, and as she sat in the back, she noticed a woman sitting there. “David, who is this?” she asked and licked her lips.

David turned around from the front seat to face them. “She’s the one who will help you retrieve what we need,” he said. He handed Carey her gold detective shield and weapon. “Don’t look so surprised. I have my ways, Detective. You will need your identification. Now, Nina, I take it Sebastian wasn’t there? Is your curiosity satisfied?”