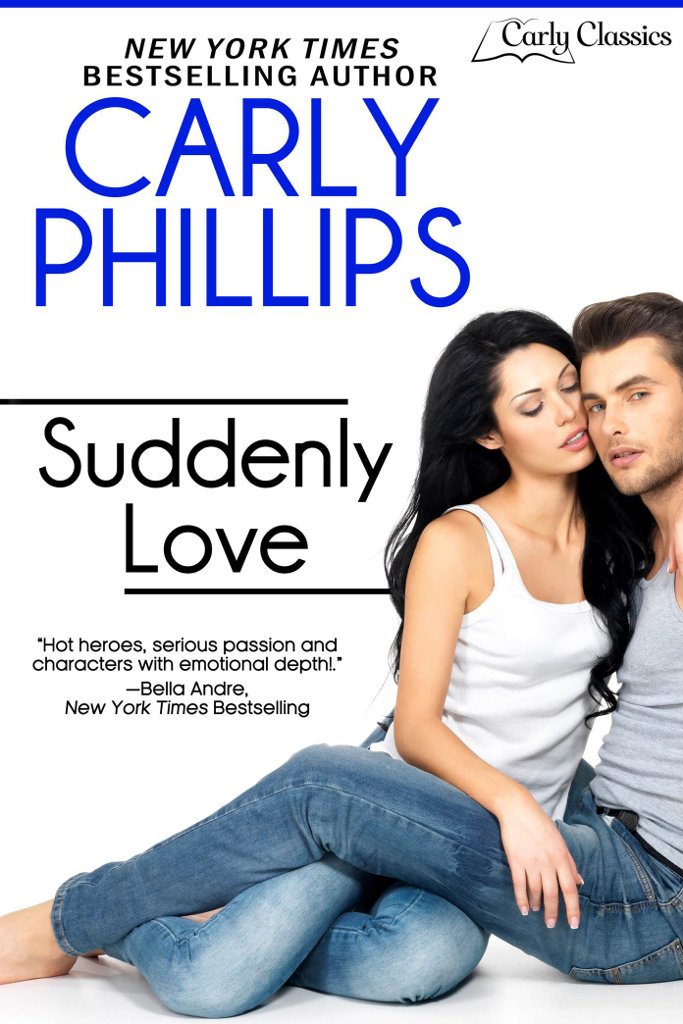 Do you ever really forget your first love?

Lissa Gardelli hasn’t seen Trevor Dane since he left their small town to earn his spot on the right side of the tracks. Ten years have passed but neither has really moved on from their passionate teenage affair or the heartbreak that followed. What starts out as business quickly moves into the bedroom and they discover the sparks between them burn brighter than ever. This reunion can be their second chance, if Trevor can accept everything about Lissa, including her daughter.

All rights reserved. No part of this book may be reproduced in any form by any means without the prior written consent of the Publisher, excepting brief quotes used in reviews.

Welcome to “Carly Classics”, books I wrote earlier in my career that have been modernized for your reading enjoyment. These stories hold a very special place in my heart and I’m thrilled to be able to share them with you now.

O
n a mission, Elisabetta Gardelli walked into Consign or Design, a small shop off Main Street in downtown Serendipity known for high-end outfits bought on consignment and unique items created by the owner, April Mancini. The bells rang over Lissa’s head as she entered and the yapping bark of a small Yorkshire terrier greeted her.

“Hey, Lucy.” Lissa bent down to pet the head of the small dog, whose little tongue licked her, showering her with undying affection.

Lissa waved a hand and rose to her feet. “I know. Until now I’ve been able to make do with the clothes in my closet.” She hadn’t had the extra money to splurge on herself.

April smiled. “That’s because you’re a good mom and give everything you can to your gorgeous daughter.” She tucked her vibrant, layered red hair behind her ear.

At the mention of Olivia, Lissa smiled. It was true she’d rather spend her hard-earned money on her ten-year-old than on herself.

“I still think you should have taken Bradley to the cleaners,” April muttered, speaking of Lissa’s no-good, cheating ex, whom she’d married right after high school graduation.

“If I could have proven he had access to his family’s money, maybe I would have.”

Throughout their marriage, it had looked like they had money. The Banks family had all the superficial things covered—a nice house, a Lexus to drive, all the things that looked good to the town. In reality, Brad earned a salary at his father’s dealership that paid for the bare bones of what they needed to live, and he’d kept her on a tight budget. Meanwhile, his parents had financed any and all extracurricular activities Brad wanted, including country club membership and expenses.

Lissa had been the stay-at-home wife and mother Bradley had married out of obligation while he’d continued to live a single lifestyle. Even knowing he had affairs, she’d stayed so her daughter could have a stable childhood, two parents living under one roof. But as Olivia grew up, Lissa realized that if the rest of the town was aware of her husband’s mistresses, it was only a matter of time until Olivia discovered the same. Lissa didn’t want her baby subjected to gossip, nasty comments, and laughing behind her back at school. Finally, enough was enough and Lissa had walked out.

The good news was, their daughter wanted for nothing. Grandma and Grandpa Banks saw to that. At least Lissa had been smart enough to obtain her online college degree. In between colic, feedings and toddlerhood, a B.A. in journalism had taken her more than five years. When it came to the divorce, she’d received exactly half of what Bradley earned, which had only been enough for her to put a down payment on a house for herself and Olivia. She lived on what she earned. The child support went for her daughter.

These days, she only wanted to reach for the goals she’d shelved when she’d stupidly gotten pregnant as a senior in high school. Though Lissa wouldn’t trade Olivia for the world, since her divorce she’d done a one-eighty, determined to teach both herself and her daughter about self-respect.

“Well, I admire you,” April said, unaware of the direction of Lissa’s thoughts. “You’re proof that hard work pays off. I read your interview with Faith Harrington in the
News Journal
. And I’m sure things are looking up for our resident big-time journalist now,” April said warmly.

Lissa marveled at the description. She still thought of herself as a small-town coffee-server-slash-obit-writer, not a legitimate newswoman. But ever since Faith Harrington had given Lissa the interview every newsperson on the planet coveted, Lissa had arrived in her chosen field.

“Things are definitely looking up. I’ve been hired to do a series of interviews for the
News Journal
. Thirty Under Thirty, they’re calling it—about men of Fortune 500 companies and entrepreneurs who’ve made their mark at an impressively young age.”

“You go, girl!” April pulled her into a huge congratulatory hug.

Lissa wasn’t a warm and fuzzy kind of person, but April was—and in this store, April’s rules applied. Lissa allowed the embrace for as long as she was comfortable, then stepped back.

“So what can I do for you?” April asked.

Lissa was supposed to meet her friend Kate Andrews for this shopping expedition, but as usual, Kate hadn’t yet arrived. Lissa glanced at the items hanging from hooks on the light green walls. Though Lissa couldn’t afford a new couture suit, she knew April would be able to put together the perfect outfit at a reasonable price.

She’d just have to start without Kate. “I need a kick-ass designer suit in order to make a good impression,” Lissa said.

“On one of those Fortune 500 guys?” April asked hopefully.

Lissa drew a deep breath, still unable to believe the subject of her first interview. Just the thought of him set her nerves tingling. “One guy in particular,” she murmured.

Before Lissa could answer, the bells over the door rang again and Kate came bursting through, out of breath. “I’m here. Sorry I’m late, but I’m here.” Kate’s long hair was in wild disarray, her cheeks flushed pink.

“Let me guess. You overslept?” Lissa laughed, knowing that wasn’t the reason.

Kate exhaled long and hard. “I had to stop by my mom’s, and she started talking, and I just—”

“—lost track of time,” they both said together.

Kate couldn’t manage to account for her time and was chronically late, but Lissa could never be mad at her. Kate was one of the good people in this world. They’d both grown up in Serendipity, gone to the same elementary, middle, and high schools—and had never spoken to each other. Oh, they glared plenty, Kate being one of those girls with money, like Faith Harrington. Lissa had been a townie without.

To her shame, Lissa had carried that attitude into the present, at least where Faith was concerned, and she cringed at the memory of how badly she’d treated the other woman when she’d returned to town. Even though Faith’s father had been convicted of running a Ponzi scheme that rivaled Bernie Madoff’s, Lissa had thought Faith’s life had been easy. How wrong she’d been.

Thank goodness Faith had seen through Lissa’s bitterness about her own life and given her a chance despite her attitude. Faith had taught Lissa the meaning of generosity and of rising above it all. Lissa was more grateful for that hard lesson than for the actual interview.

April clapped her hands, capturing her attention. “Lissa was just about to tell me why she needed a kick-ass designer suit. And which Fortune 500 guy she wanted to impress.” April lifted one perfectly penciled eyebrow.

“Well? Are you going to tell her?” Kate asked. “It’s Trevor Dane!” she said, blurting out the news before Lissa could do it herself.

“My high school sweetheart,” Lissa said. The only man she’d ever truly loved and the one she’d hurt beyond reason.

The
News Journal’s
list of interviewees was set in stone. She had no choice but to face Trevor again for the first time since telling him she was pregnant with Bradley Banks’s baby, ten years before. Although Faith Harrington had been given a second chance with Ethan Barron, another man Lissa would be interviewing, she already knew she had royally screwed up any shot with Trevor Dane a decade earlier.

She didn’t deserve another.

And to put an exclamation point on that old statement, Trevor had gone away to college; he lived in Manhattan; and though he’d visited Serendipity and his family over the years, when it came to Lissa, he’d never looked back.

“
News Journal
magazine wants to interview you,” Alexander Wittman, president and CEO of Wittman Financial Management and the son of the firm’s founder, said as he walked into Trevor Dane’s corner office.

Trevor didn’t turn. Instead he stared out at the streets of Manhattan from the luxury high-rise office building on Broad Street, wondering how a kid from the wrong side of the tracks had arrived at this point. Brains, hard work, and a helluva lot of luck. That and a burning desire to get out of his hometown of Serendipity, New York, and rarely go back. It’d be
never
if not for his family, Trevor thought wryly.

“Did you hear me?” Alex asked.

Trevor pivoted to face his boss and mentor. “I was just taking it in.
News Journal
, huh?” Like
Forbes
, the magazine was a must-read in the business world.

“Thanks. I owe it to you.” A decade older than Trevor, Alex had been his mentor since he’d interned with him one summer. “My secretary gave me a schedule of events the reporter will be attending with me. Apparently she wants to follow me around even in my off hours,” he muttered.

She was even supposed to attend the annual charity gala the firm was sponsoring on Friday night at the Waldorf. Though Trevor wasn’t pleased, it did save him the hassle of finding a date, the need for which he’d been ignoring.