Read Such a Daring Endeavor Online

Such a Daring Endeavor 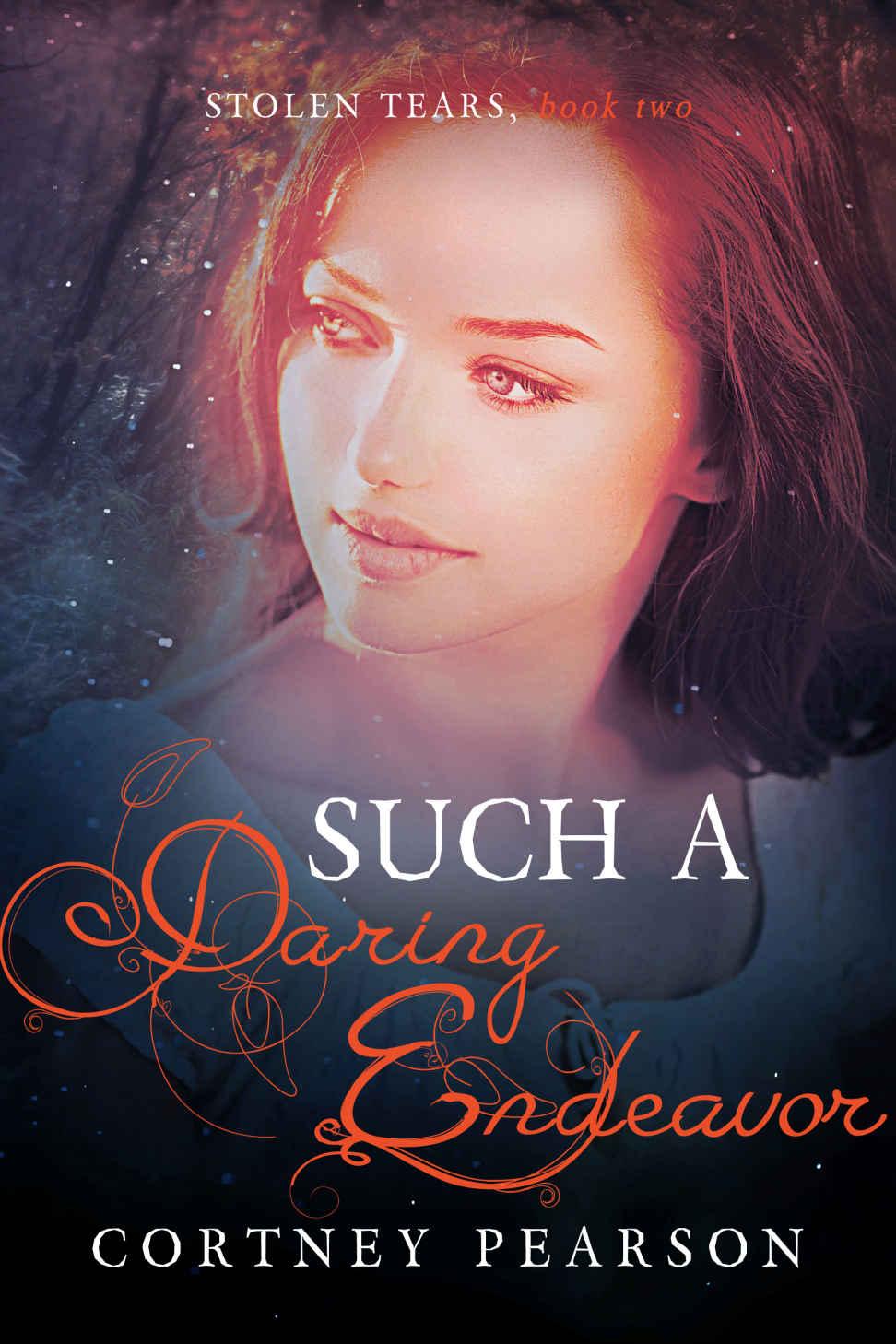 For Anna, my sister and friend.

For never giving up.

I will either find a way or make one.

T
he soldiers’ boots clatter on the boardwalk. Their breath exhales in one communal puff, and Shasa presses her back harder against the rough bark of the feiberry tree to avoid being seen.

Stars glimmer above, spectators to the patrolling soldiers. Shasa purses her lips until they pass, complimenting herself at such a resourceful hiding spot. Even the owl hooting softly above in the latticework of branches doesn’t know she’s concealed here.

Waves push one another around on the sand to her left. The steady rush of their movement sends a calm stream into Shasa’s raging nerves.
This will work
, she tells herself.
This is going to work.

Tonight, she’s going to get Jomeini out.

The shed is the last in a line-up of newer buildings. New to Shasa, at least. They weren’t here when she first came to Valadir in search of Talon three years ago. Two stories tall, the shed is unassuming and ordinary; wooden, square and long. The roof points up into a
V
. The shed has two main entrances, a smaller door for pedestrians, and a larger door that folds up to allow larger pieces of machinery through. In this case, boats.

She spoke with Jomeini only last night, when she accompanied Solomus Straylark to slip a bottle of poisoned wine to his granddaughter through the door. According to plan, Jomeini should have found a way to
accidentally
administer the wine to their captor, and if everything went well, he would be nullified before the night was through.

Accidentally
was the key. Neither Jomeini nor Shasa can purposefully harm Arthur Craven. That’s why Solomus Straylark poisoned it before handing it over to Jomeini—Shasa tried, but it was like stabbing herself in the heart the minute she tipped the poison to the wine bottle’s opening. The same thing would happen to Jomeini if she gave it to Craven outright, but if Jomeini set it somewhere Craven would drink it by accident…

Shasa tenses. If Talon were here, they wouldn’t have to resort to this ridiculous gamble. But she can’t think about him now, not with this worry rotting in her chest.

The moon hangs lower than the last time she checked. Curse it. Once the sun rises, this place will be crawling with Arcaian soldiers. She’s been waiting all evening for the sign that Craven drank the poison. For her magic to spill through her, to take her breath at its reentry into her bonestream. But it hasn’t happened yet, which means—

“Anything?” Solomus whispers. His limping feet disturb the bark in the flowerbed surrounding the cove of trees, and she holds back a snarky comment to shush the old man.

He’s hunched over, his dark skin blending him into the night that much more. Shadows cast over his eyes and bring out his nose. His silver hair seems to float over the dark shirt and trousers he wears.

“Nothing,” Shasa says. She rubs her arms, acutely aware of the emptiness in her bones, like a river run dry.

“There is still time. Craven always stayed up late. If he’s tired enough, maybe he’ll stumble across the bottle and—”

“Shh,” Shasa commands, whipping her arm out in the wizard’s direction.

Craven’s gravelly voice carries through the shed’s wooden boards—indistinct and rising to a shout. Impatience buds within Shasa’s chest, and she leans out just enough to take in the moon’s position. It’s waxing, sinking lower to the east. Not much time.

“Out of the question.”

Shasa huffs. Every time she suggests the wizard confront Craven himself, Solomus shoots her down without reason.

The owl overhead hoots once more. Waves crash from the shore, and the Triad Palace lights glow like floating lanterns across the training grounds that separate these sheds from the colossal structure.

They can’t just stand here, doing nothing. Shasa rotates around the tree trunk, staying out of sight as the voice within the shed magnifies. The shed door opens, spilling orange light from within.

“Figure it out,” Craven barks in a final slur before slamming the door behind him

“Follow him,” Shasa snaps under her breath. Solomus mutters acquiescence, tottering after the other old man.

Shasa presses against the trunk’s rough bark once more, watching Craven trudge off in his same long gait. He no longer wears the overlarge coat he wore in her first days as his captive, but a shorter jacket, stopping at the waist. His deep set eyes appear hollow in the night’s shadows, and he tucks his chin down while walking toward the belly of the city, away from the lapping ocean.

Shasa doesn’t hesitate. She grips the pouch at her side, silently thanking the banshing powder within. If she hadn’t been dissolving it into her water for the past six months, Craven would have sensed her; he would have forced her to remain. But this time she enters his latest hiding place of her own accord.

Shasa glances over her shoulder before pushing into the too-warm room. The stifling air plugs her lungs, causing her to open her mouth for a breath. The distinct smell of fish swirls as well—probably from the set of large nets dangling from hooks to her right.

A single bulb lets off constricted light from wooden beams high above her head. Cobwebs span the upper rafters. Several life vests dangle from a line of hooks. Large aluminum boats take up most of the space, their front ends propped up by a jack resting on a board.

Shasa tiptoes around discarded barrels, fighting the fish smell turning her stomach. She peers toward the larger overhead door where a pair of fishing poles have been flung haphazardly against the boxes and containers covered in dust.

The place would never look this rundown if wizards were still ruling here. It’s clearly been neglected for some time now, if Craven has taken up residence.

Waves rush outside. A hollow wail weaves in between cracks in the wooden boards above, and something small scurries nearby.

“Up here,” a voice finally replies.

Shasa glances up at the nearest aluminum boat. Propping a hand on the metal, she climbs up the wheels of its trailer and hurls herself over the walls.

Threadbare towels are stuffed below the bench along the boat’s walls; hooks and lures dangle from discarded fishing line, and a cooler lies open displaying a collection of packaged meat and dried fruit. Peaches, from the look of it. And near the helm, behind a vinyl chair smeared over with Shasa doesn’t want to know what, on a folded blanket as filthy as everything else in here, sits Jomeini.

Dark hair drapes down in clumps, blocking Shasa’s view of Jomeini’s face. Her slim, bronze hand cradles a pencil, scratching it across a thick parchment on top of an upturned crate like a makeshift desk.

“Hey,” Shasa says, kneeling at the girl’s side. “What are you doing in a boat?”

Jomeini lets the pencil hover over the paper before lifting her head. Though Shasa knows she’s fifteen, Jomeini looks closer to twelve. She’s just so…tiny. Regardless of her size, her delicate bones give Jomeini a regal presence. It’s the way she holds herself, even after all this time of being a prisoner.