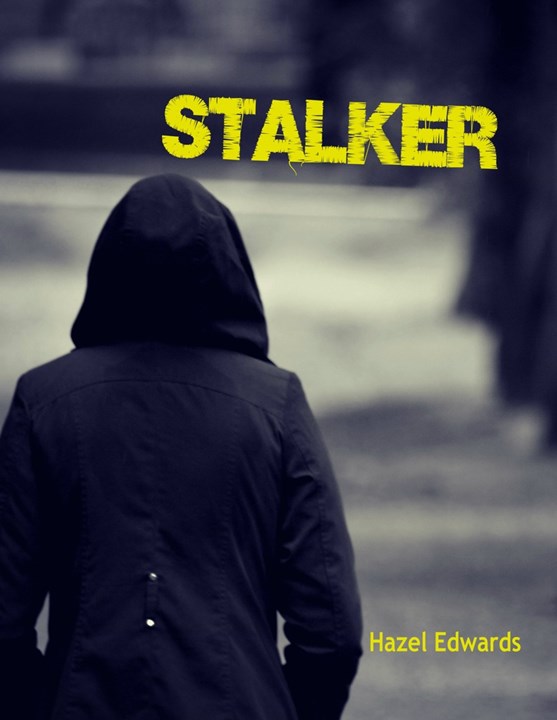 F2m: the boy within

A YA Novel by Hazel Edwards

What is Stalker about?

Lily is being stalked. As 3BC FM’s midnight- to- dawn presenter, Lily attracts followers. But the Stalker is different. Obsessive. Possessive. And dangerous. Lily copes with hate-mail, a wreath, and even her temporary desire for celeb status with ‘ a personal stalker.’ But when the Stalker moves in closer, Lily needs help. Especially when she’s working alone in the studio on the graveyard shift. But who is obsessed, the stalker or the stalkee? Who is playing the fame game?

Who is the author?

Hazel Edwards is an Australian author of over 200 books published internationally. Best known for the classic picture book ‘There’s a Hippopotamus on Our Roof Eating Cake’ (Penguin) , she has written a number of YA (Young Adult) novels including  ‘f2m;the boy within’,  Antarctica’s Frozen Chosen’ and ‘Outback Ferals’.  Recently she had a ‘virtual ‘ intern Corrie Thompson who helped with preparing this manuscript for digital reading.
www.hazeledwards.com
has reviews, articles and relevant links. Hazel is interested in experimenting with new media for her backlisted titles.

All rights reserved. No part of this publication may be reproduced, stored in a retrieval system or transmitted in any form by any means without the prior permission of the copyright owner. Enquiries should be made to the publisher.

I am obsessive, electronically
skilled and
devious. Lily copes with hate-mail, a wreath containing lilies and tall poppies , and even her temporary
desire for celeb status associated with ‘ a personal stalker.’
Being the target of a stalker can be a disconcerting or even terrifying experience. Many become victims.But some fight back. Lily fights back.
I am the Stalker and I (almost) control Lily's life.

Lily knew her voice didn’t sound normal. How could it? She was freaking out. Shut in studio 4 with the stalker out there in the dark. Should she lower her voice to pretend she was in control?

What else could she do?

Not much now, until the program finished. Then she’d tackle him. It was time to fight back, instead of just accepting the fear he’d created around her.

So Lily kept talking into the mike:

‘Tonight we’ll play The Catchers. And due to mega numbers of calls, we’ll repeat the interview with Y from the Cult.’

Lily hit PLAY and let out her breath, silently. Only 4 hours 36 minutes to go.

She said ‘we’, but it was really her alone in the studio tonight. Usually, Jamie did the panel on the graveyard shifts Friday and Saturday, but tonight he had exams. And only thirteen requests for the Cult, on the ring-in number. Average for a Friday night. Was it significant that tonight was Friday the 13th and things were going wrong?

She wasn’t superstitious. Not much. She had to keep going. Anyway, it was past midnight and Saturday the 14th by now.

She really missed Jamie tonight. Normally, he checked the voice levels, continuity, that sort of thing. A bit of support. Light bouncing off his shiny No1 haircut, pebble glasses and smiley eyes. A chat between music. Handled the ‘nutters’ on the phone. Reception was supposed to stop the weirdos, but unlike Reception, nutters didn’t keep office hours. And the graveyard shift attracted the odd ones. She’d had a few before she did THAT Cult interview. Like PETLOVER who kept sending her postcards saying ‘Night radio waves hurt animals’ ears.’ Or the Jesus the Carpenter needs joiners like you,’ guy who sent a toy saw. At least that was clever. And now the re-run would attract a second lot. But Management had ordered repeats. Keeping their costs down, she reckoned, but maybe this would be at her expense.

She leaned across, and knocked her glass of water.
‘Shit!’
The water puddled on the table. Lily ripped out some tissues and then she noticed.

Oh no! The microphone was still on. They would have heard that. She hoped they’d think it was background from the CD. She flipped the switch off and mopped madly with a tissue. She hoped that nothing electrical had fused.

‘No fireworks Lily,’ she muttered to herself. That was a bad sign, the muttering. Last stage mental problems! AAAHHHH. More panic waves, swamping her. She did a silent scream and felt slightly better. At least no-one could see her. What did they do on TV when things went wrong? Add to the Video Bleeper Industry probably.

Until recently she’d been proud of her spot on public radio. She liked the ritual of walking down the brown corridor under the red ON AIR sign and feeling part of the media. The studios were like little pockets of sound and light, behind the glass walls. Now things were changing, and so was the way she felt about being alone in the studio late at night. Instead of pride at being independent, she felt fear, at being alone in an almost empty building. Growing fear.

At least, on the panel all the right lights seemed to be working.

‘Damn you Jamie. Why aren’t you here, when I need some backup?’

Maybe she still had some listeners out there? Maybe tackling HIM outright, on air, was the way to go? Maybe not. A fan- a-tic was not the same as a fan.

‘Think, THEN act!’ her Mum always used to say. That’s why her mother was off volunteering on some third world island, when she could have been here. Acting meant feeling you were doing something positive, instead of just WAITING!
Drum. Drum. Drum
. Her fingers were drumming on the desk. She stopped. This was serious stress.

‘Sorry, won’t be in tonight Lily. Got my exams. Swat vac.’ Jamie’s writing in her pigeon hole was very neat. Strange for a nerd to be so careful with up-and-down strokes. That pigeon hole had been stuffed with letters recently-not all fan mail. The Stalker was sending snail mail too. Most she filed in the bin, especially since she’d decided not to let him run her life. But she did read it first. That worried her, but nor reading it worried her more.

She checked. Nearly the end of ‘The Catchers’ music. She leaned forward.

‘So, what did you think of that? Hot or what?
‘Lily adjusted her ear-phones. Definitely a presenter with a big head on the earlier program. A bit strange talking to yourself, and never knowing who or how many were listening. The invisible audience was a guesstimate. Bernie reckoned that one phone call meant 100 more were listening. Or ninety-nine plus the one who called in. The stalker was listening, for sure. But was it on a car radio nearby or somewhere else? How close? She didn’t want him to ring in again, especially as he’d left so many messages on the comment line this week, in different voices and names. More worries, like a cloud around her. At least that line was off-air, and she didn’t have to listen personally. Bernie checked the comment line but handling The Stalker on-air if he did call directly was going to be difficult.

‘Hang in with me tonight and we’ll have some hot goss. coming up soon. Heard the latest about Y, lead singer from The Cult and how they’re going into the God Business?’

Talking to a mike was different. Not like talking face-to-face with laughs, smiles or yawns. Did it sound okay? Not too Strine
? Not too nervous? No ‘dead air’? Genuine listeners’ feedback showed they loved the ‘hot
goss.’ segments and the talkback topics. Youth suicide had pulled a big response.

Last week she prepared this topic. So much had happened in-between, but it was too late to change now. Just before Matthew left, she’d been offered the presenter’s job, so that Bernie, the new manager accepted her as part of the scene. He didn’t seem to know that she’d only been there weeks, not years. Jamie had been around for ages, researching or mucking around with the panels, fixing things. But she liked the ‘up front’ stuff. The idea that she could pretend to ‘be’ someone, a ‘personality’ was like a fame game where she was playing a role on the microphone that was more dramatic than the inside Lily.

When she walked into the studio she became Lily on air who was more outgoing than the real Lily Noelle. That’s how she’d ended up asking questions about ‘The God Business’ with the Cult. And why there were problems now. The mysterious ‘someone’ had misinterpreted her questions. How many Jesus-freaks were there?

A light flashed on the board. An incoming call.

The three second delay button was on. So she could kill the call, if necessary.

Nothing. An empty line? Or someone just breathing and getting up courage to speak on air? She leaned over the kill button.

Shy ones sometimes choked up, so it could be genuine.

‘Er, this is William. I’ve had a bad day. So there must be something about 13 that’s bad luck.’

‘And why do you think that, William?’

Lily went into fast mode, scribbling ‘William’ on the running sheet. It was important to use caller names on air, because it made them and the other listeners feel special. Listeners always noticed when you mixed up what you thought were ‘nothing’ names, especially when it was their own. Not Willie or Will or Bill. William.

Diplomatic Immunity by Grant. Sutherland
A Gull on the Roof by Derek Tangye
Cold Hard Cash: A Story of Erotica by Bebe Wilde
Their Private Arrangement by Saskia Walker
Change of Passion (Falling for the Billionaire #1) by Karolyn James
The Five Lives of Our Cat Zook by Joanne Rocklin
What Are Friends For? by Rachel Vail
Leviathan by Paul Auster
A Luring Murder by Stacy Verdick Case
Going Postal by Terry Pratchett