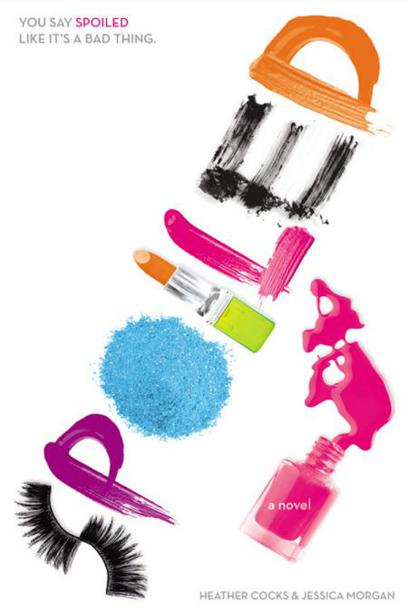 This is a work of fiction. Characters, places, and events are the product of the author’s imagination and are not to be construed
as real. Any resemblance to actual events or persons (living or dead) is purely coincidental. Although some celebrities’ names
and real entities and places are mentioned, they are all used fictitiously.

“
ARUGULA, PUT THEM DOWN.
You know thigh-high sandals give you cankles.”

Brooke Berlin snatched the seven-hundred-dollar Gucci gladiator shoes out of her friend’s hand and threw them back onto the
display table, knocking over five and a half pairs of boots in the process. Choosing not to notice the shoes strewn across
the floor—Brooke, in life and in shopping, rarely cleaned up her own messes—she cast a concerned frown at the Tyra Banks clone
at her side.

Satisfied that she’d helped save yet another soul from style self-sabotage, Brooke turned and surveyed the modern, high-ceilinged
store—shirts crisply folded on tables
illuminated from within; white walls lit by metal pendant chandeliers as skinny as the clientele; gleaming chrome benches
for those clients’ tired plus-ones—and inhaled deeply. She loved the smell of retail. Shopping was her Xanax, her Red Bull,
her cure for the common cold: Brooke truly believed anything could be fixed by flexing the trusty plastic rectangles in her
wallet. Some might have called it excessive consumption (like her father, if he ever noticed the bills), but Brooke preferred
to think of it as philanthropy. Those poor schmoes wearing name tags pinned to last season’s blouses all worked on commission,
and minimum wage wouldn’t even buy half a sushi roll at Nobu. Shopping was practically her patriotic duty.

Today, though, the central display was underwhelming. Inferno was the trendiest boutique in Los Angeles, the kind of place
where paparazzi “caught” people like Nicole Richie buying maxi dresses, and tourists waited outside behind velvet ropes. But
inconveniently, a mere week before the most important night of Brooke’s entire life, Inferno’s management decided the next
hot fad was an exhumation of Seattle’s 1990s grunge scene. Even Katy Perry, riffling through the racks across the way, seemed
dismayed. Through the window, a paparazzo snapped her scowling at a flannel romper. Brooke felt a flare of envy and turned
away.

“What lunatic thought this was a good idea?” she whined, poking at an oversize plaid button-down. “I can’t show up at this
party dressed like a lumberjack.”

“We could go across to Chanel,” Arugula offered.

“And look like an old lady? I don’t think so.” Brooke cleared her throat and raised the volume a few decibels. “Daddy and
I just want everything to be perfect. Brick Berlin doesn’t do anything halfway.”

“Dude, that’s Brick Berlin’s kid?” someone whispered as a spate of heads jerked in their direction. “He’s, like… Oh. My. God.
Those
abs
.”

Brooke beamed. Just because she wasn’t a household name—yet—didn’t mean she was totally anonymous.

“We haven’t even been here five minutes and you’ve already played your trump card?” Arugula whispered.

“I can’t help it if tourists have excellent hearing.”

“I know you better than that,” Arugula said. “You’re clearly anxious. I
told
you not to skip power yoga this morning.”

“I just couldn’t handle ninety minutes of looking at people’s crotch sweat,” Brooke said. “And I don’t believe in anxiety.
It gives you wrinkles. But I do have to look exactly right on Saturday. A girl only turns sixteen once.”

“Technically, this is
your
third time in a few months,” Arugula replied. “Remember, you let the football team cook you a birthday meal to count toward
its community service, and on your actual birthday in May your dad bagged on Spago to scout a location….”

“Details,” Brooke said dismissively. “This is the one that
counts
.”

She scanned the rest of the store, bypassing spandex
bodysuits, vegan shoes—a trend Brooke couldn’t wait to see die; to her, fashion wasn’t cruelty-free if it was ugly—and one
very alarming jumpsuit covered in spikes. Her shining moment was too important for an outfit that belonged on VH1 Classic
being worn by a big-haired tart writhing on the hood of a pickup truck. Brooke Berlin was many things, but tarty wasn’t one
of them.

Across the room, she spied a familiar pair of bifocals peeking out from a messy lump of dresses near one of the changing rooms.

“I thought her name was Martha,” Arugula said.

“Martha is a name for old people with suspenders for their socks,” Brooke said. “I’m doing her a favor. Cheese is so
in
right now. Brie!”

A fist poked out from the teetering heap and gave Brooke a shaky thumbs-up.

“At least she’s got better taste than the last underclassman you hired,” Arugula noted. “Remember those Hot Topic coupons?”

“I know,” Brooke shuddered. “As if I shop at the
mall
, much less the store that costumed my dad’s zombie eating-disorder movie.”

“Was
Chew
any good? I couldn’t bring myself to see it.”

“Don’t,” Brooke confided. “Daddy dumped the lead actress in the middle of filming and you can totally tell. She stops purging
with conviction halfway through the second act.
So
disrespectful.”

They walked over to Brie, who was sticking out a pasty leg to keep patrons from snagging the lone empty dressing room. Brooke
patted her sophomore assistant on the head—it was important to be gentle with the help—scooped up a layer of dresses, and
closed the curtain behind her.

“I’m surprised Brick actually agreed to let the tabloids document this party.” Arugula’s voice floated through the velvet
drape. “Mother said the agency decided the single jet-setter image did more for his profile than ‘doting father.’ ”

“Actually, Daddy’s just
very
protective,” snapped Brooke, shimmying out of her sundress. “But once he saw how important it was to me, he couldn’t say
no.”

He had, in fact, said no several times. It had been ten years since Brick Berlin let his daughter make any sort of public
appearance with him. He claimed it was for her safety, but it wounded Brooke; she liked showing off her father, plus it seemed
like a tremendous waste of his connections. But after three crying jags, one expertly rendered fainting spell, and a bunch
of brochures scattered around the house with titles like “Twenty Myths About Manual Labor,” Brick caved and agreed to throw
Brooke a sweet-sixteen party that would introduce her to Hollywood the way she’d always dreamed: as his daughter, the budding
actress. It was about time. What was the point of being a celebrity legacy if it didn’t open doors? Nepotism was only a dirty
word if you had no talent.

“Ugh. I look like a Hells Angels reject in this,” Brooke complained, throwing a studded leather skirt through the
curtain in Brie’s general direction. “Seriously, if we can’t find something decent for me to wear, this whole cover story
will be ruined and I’ll have to abandon Hollywood and make my living as a”—Brooke paused, then shuddered—“a
doctor
, or something.”

“God forbid,” snorted Arugula as Brooke emerged in a gold textured sheath. “Too scaly,” she added. “Also, don’t disparage
premed before you’ve tried it. My own independent study of anatomy textbooks has been engrossing.”

“You are so weird,” Brooke said fondly. “Good thing you punched Magnus Mitchell for gluing my hair to the swings when we were
five, or else you might be spending Saturday night reading the thesaurus instead of being fabulous with
moi
.”

“Please. Even geniuses like to party. Here, try the green one.”

Alone again behind the curtain, Brooke felt a wave of excitement. Since Brick had gone from action star to busy actor-director-producer
with unfettered access to studio jets, they rarely did anything together. She didn’t begrudge his success—in addition to all
the money, being Brick Berlin’s daughter had even the teachers at school treating her like a queen. But Brooke missed the
days when her father would come home every night, scoop her up with a grin, and make her tell him a story. Now,
if
he had time to call from the road, he just absently asked her stuff like whether
they still taught gymnastics in PE. It was like he wasn’t quite paying attention.

Well, that will change
, Brooke thought, casting an appraising look at her reflection. The tart green silk wove around her in a series of perfect
pleats, making her waist look tiny (it was), her light tan look natural (it wasn’t), and her legs seem ten miles long (a theory
that several seniors on the cross-country team had offered to test). Brick would be pleased and proud.

A disembodied voice punctured her thoughts.

“Poor Arugula. Last season’s YSLs?
Really?
Do I smell an exclusive? Is Brick Berlin stiffing your mom on her commission?”

Brooke froze. Shoving her feet back into her Louboutins—
this
season, naturally—she charged outside and stopped dead in front of the one person who truly made her skin crawl.

“Hello, Shelby,” she said, infusing two years’ worth of contempt into each syllable.

“Brooke. Of course. I
thought
I smelled drugstore perfume,” Shelby Kendall said, tossing her overabundance of shiny black hair as if she were in a Pantene
ad.

Brooke focused on her rival’s annoyingly flawless face and prayed a zit would appear and spontaneously burst all over the
Diane von Furstenberg shirt that was slipping off one of Shelby’s smooth shoulders. Ever since Shelby had arrived for freshman
year having renovated herself suspiciously quickly from a mousy, forgettable teacher’s pet into
a tat-free Angelina Jolie, she’d set her sights on using the school’s TV station to usurp Brooke’s queen-bee status, and the
two girls had gotten along about as well as a pig farmer at a vegan restaurant. It boggled Brooke’s mind how easily people
bought into Shelby’s popularity ploy and vaulted her up the social hierarchy. At least Brooke’s own charms were natural (well,
except for her tan, but it was a fact that bronzer saved lives). Beauty bought with the money Daddy made digging for scandals
in half of their classmates’ own backyards seemed like it ought to be a tougher sell.

Shelby met Brooke’s eyes with barely a blink. The paparazzo hovering outside waved at her and pointed at them questioningly,
and Shelby shook her head with a very dismissive wave.

“One of my father’s guys,” Shelby explained. “For a second he thought you were somebody.”

Tapestries 04 - Threads of Destiny by N. J. Walters
Three Ways to Wicked by Jodi Redford
Nimitz Class by Patrick Robinson
You Can't Make This Up: Miracles, Memories, and the Perfect Marriage of Sports and Television by Al Michaels, L. Jon Wertheim
All American Rejects (Users #3) by Stacy, Jennifer Buck
The Silver Star by Jeannette Walls
Small Town Siren by Sophie Oak
The Second Chance Café (Hope Springs, #1) by Alison Kent
Marked for Death: Islam's War Against the West and Me by Geert Wilders
Esther : Royal Beauty (9781441269294) by Hunt, Angela Elwell