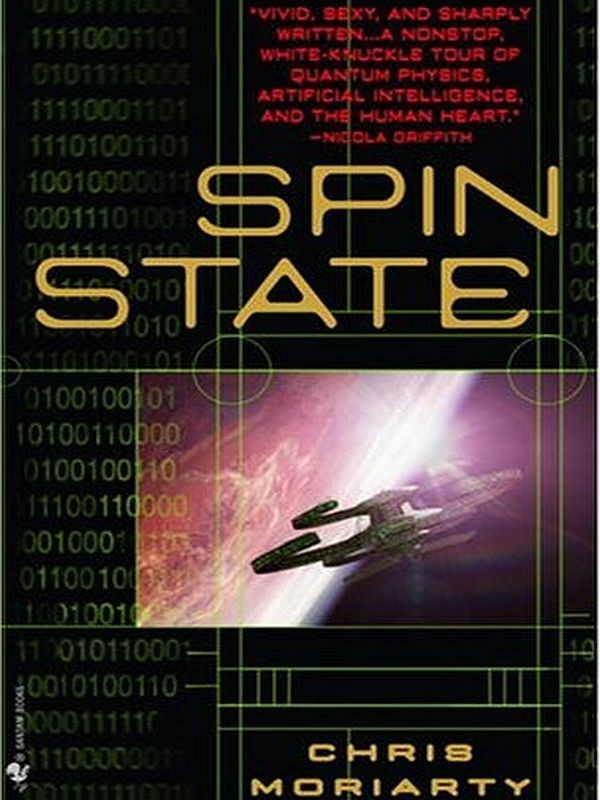 Then we encountered a leopard man who was rumored to be a cannibal. He must not have thought we looked good to eat; he smiled and let himself be photographed like a veteran tourist guide. After that I started asking everyone where we could meet real cannibals. I wanted to see them, know them.
“They exist,” my hosts told me. “But where?”
“No one knows. But there’s nothing special about them. You can’t even tell them apart from normal people.”
“Ah, but I have to know them, eat with them! I want to eat a person. Just a taste. Just to taste it!”

Special thanks to Anne Lesley Groell for her brilliant editing and uncanny ear for what I meant to say; to Charles H. Bennett, John A. Smolin, and Mavis Donkor of the Quantum Information Group at IBM’s Watson Labs for brainstorming, technical advice, and quantum teleportation jokes; to Ann Chamberlin and M. Shayne Bell for kindness above and beyond the call of duty; to Scott Anderson, Julia Junkala, Jim McLaughlin, Susan Mayse, Tony Pustovrh, and Kirsten Underwood for being the best readers any writer could ask for; to Judith Tarr for sensible advice and extravagant encouragement; to John Dorfman for being there at the beginning … and of course to the fabulous Jimmy Vines, who made it all happen.

SYSTEMS WITH ONE DEGREE OF FREEDOM

COLLAPSE OF THE WAVE FUNCTION

Quantum mechanics is certainly imposing. But an inner voice tells me that it is not yet the real thing. The theory says a lot, but does not really bring us any closer to the secret of the Old One. I, at any rate, am convinced that He does not play at dice.

God may not play at dice, but She certainly knows how to count cards.

They cold-shipped her out,
flash-frozen, body still bruised from last-minute upgrades.

Later she remembered only pieces of the raid. The touch of a hand. The crack of rifle fire. A face flashing bright as a fish’s rise in dark water. And what she did remember she couldn’t talk about, or the psychtechs would know she’d been hacking her own memory.

But that was later. After the court-martial. After jump fade and the rehab tanks had stolen it from her. Before that the memory was still crisp and clear and unedited. Still hers.

After all, she’d been there.

Li knew Metz was going to be big as soon as she met the liaison officer TechComm sent out to brief her squad. Twenty minutes after Captain C. Xavier Soza, UNSC, hit planet surface he’d gone into anaphylactic shock, and she was signing him into the on-base ER and querying her oracle for his next-ofkin list.

Allergies went with the uniform, of course. Terraforming was just a benign form of biological warfare; anyone who had to eat, breathe, or move in the Trusteeships got caught in the crossfire sometime. Still, no normal posthuman was that fragile. This time TechComm had sent out a genuine unadapted Ringbred human. And clever young humans didn’t get cold-shipped to the Periphery, didn’t risk decoherence and respiratory failure unless they’d been sent out to do something that counted. Something the brass wouldn’t trust to the AIs and colonials.

Soza spent thirty hours in the tanks before he recovered enough to give them their briefing. He seemed alert when he finally showed up, but he was still short of breath, and he had the worst case of hives Li had ever seen.

“Major,” he said. “Sorry you had to deal with that little crisis. Not how I imagined my first meeting with the hero of Gilead.”

Li flinched. Was she never going to enter a room without her reputation walking two steps in front of her?

She searched Soza’s handsome, unmistakably human face for an insult. She found none; in fact his eyes dropped so quickly under her stare that she suspected he’d let the words slip out without thinking how
they sounded. She glanced at her squad, settling into chairs proportioned for humans, behind desks designed for humans, and she felt the usual twist of relief, shame, envy. It was pure accident, after all, that her ancestors had boarded a corporate ship and paid for their passage with blood and tissue instead of credit. Pure accident that had subjected her geneset to anything more than the chance mutations of radiation exposure and terraforming fallout. Pure accident that made her an outsider even among posthumans.

Slip of the tongue or no, Soza was all smooth, cultured confidence when he stood up to give the briefing. His uniform hung the way only real wool could, and he spoke in smooth diplomatic Spanish that even the two newest enlisted men could follow without accessing hard memory. The very picture of a proper UN Peacekeeper.

“The target is located below a beet-processing plant,” he told them, “hiding in its heat signature.” He subvocalized, and a streamspace schematic of the target folded into realspace like a spiny asymmetrical flower. “There are five underground labs, each one of them a small-run virufacture facility. The system is deadwalled. No spinstream ports, no VR grid, not even dial-in access. The only way to break it is to shunt the cracker in on a human operative.”

Soza nodded toward Kolodny, who straightened out of her habitual slouch and grinned wolfishly. There was a new scar along the rake of Kolodny’s cheekbone. Fresh, but not so fresh that Li shouldn’t remember it. She searched her active files, came up empty. Ran a parity check. Nothing.
Christ
, she thought, feeling queasy,
how much is missing this time?

She was going to have to get someone to put a patch on her start-up files. Someone who could keep a secret. Before she forgot more than she could afford to forget.

“The rest of you will get the cracking team past the deadwall,” Soza was saying, “and collect biosamples while the AI goes fishing. We’re after whatever you can get on this raid. Source code, hardware, wetware. Especially wetware. Once the AI has the target code on cube, he wipes his tracks, and you withdraw. Hopefully without being detected.”

“Which AI are we using?” Li asked.

But before Soza could answer, Cohen walked in.

Cohen wasn’t his real name, of course. Still, he’d been calling himself that for so long that few people even remembered his Toffoli number. Today’s interface wasn’t one Li had seen before, but she knew it was Cohen on shunt before he closed the door behind him. He wore a silk suit the color of fall leaves—real silk, not tank-grown stuff—and he moved with the smooth, spare grace of a multiplanetary network shunting through cutting-edge wetware. And there was the ironic smile, the hint of laughter behind the shunt’s long-lashed eyes, the faint but ever-present suggestion that whatever he was talking to you about couldn’t possibly be as important as the countless other pies he had his fingers in.

As usual, he’d appeared at exactly the right moment, but with no apparent idea what he was doing there. “Hallo?” he said, blinking vaguely. “Oh. Right. The briefing. Did I miss anything?”

Cohen caught her looking at him, smiled, took a half step toward the empty place next to her. She turned away. He took a seat in the back. He leaned over and whispered something in Kolodny’s ear as he sat down, and she smothered a laugh.

“We interfering with your social life, Cohen?” Li asked. “Like us to take the briefing elsewhere?” “Sorry,” Kolodny muttered.

Cohen just raised an eyebrow. As he did, a thin, dark-haired schoolboy trotted into Li’s frontbrain, dribbling a soccer ball. He pantomimed an elaborate apology, then bounced the ball off the toe of one cleated foot, tucked it under his arm, and loped off toward a point behind her right ear. The cleats tickled; she had to resist the urge to reach up and rub her forehead.

Metz’s Bose-Einstein relay was sulking today. A rapid-fire barrage of status messages flashed across Li’s peripheral vision telling her that the relay station was establishing entanglement, acquiring a spinfoam channel, spincasting, matching spinbits to e-bits, running a Sharifi transform, correcting nontrivial spin deviations and dispatching the replicated datastream to whatever distant segments of Cohen’s network were monitoring this briefing.

Before the first Bose-Einstein strike on Compson’s World—before the first primitive entanglement banks and relay stations, before Hannah Sharifi and Coherence Theory—a message from Metz to Earth would have taken almost three days in transit along a narrow and noisy noninteractive channel. Now Bose-Einstein arrays sent entangled data shooting through the spinfoam’s short-lived quantum mechanical wormholes quickly enough to link the whole of UN space into the vivid, evolving, emergent universe of the spinstream.

Soza had turned back to the VR display and was explaining the logistics of the raid. If things went as planned, Cohen would shunt through Kolodny and retrieve the target code. The rest of Li’s squad had only two jobs: get the AI in and out and collect biosamples while he cracked on-line security. It sounded little different from the two dozen other tech raids Li had commanded, and she thought impatiently that Soza could have briefed them more efficiently by dumping the data into the squad’s shared hard memory. She sat through about five more minutes before interrupting him with the obvious but stillunanswered question.

“So what are we looking for?”

“Ma’am,” Soza said. He hesitated, and Li saw a flicker of self-doubt behind his eyes. She thought back to her first command, remembered the panic of wondering if she could give orders to seasoned combat veterans and make them stick. She’d been different, though. She’d led Peacekeepers in combat against Syndicate ground troops long before her first official command. Hell, she’d held a wartime field commission for three years before her CO would recommend a quarter-bred genetic for officers’ candidate school. “Our reports—” Soza cleared his throat and continued. “Our reports indicate that the facility is producing products on the Controlled Technology List.”

“That’s not too helpful,” Li said. “Last time I saw the CTL it ran to a few thousand pages. We go in with that, we’re going to be confiscating wristwatches and toenail clippers.”

“We also have strong evidence the parent corporation is Syndicate-friendly.” “That’s it?” Li asked incredulously.

He was lying, of course. She could see it in his eyes, which met her own gaze with unblinking, unnatural steadiness.

Her mind flashed back to her first meeting with Helen Nguyen—Christ, how many years ago had it been? She’d been younger than Soza then, but she’d already survived Gilead. And she’d known, standing in the discreet office of the woman whispered to be the UN’s most ruthless and successful spymaster, that Nguyen’s support could help her survive peacetime.

The Dragon Pool: The Dragon Pool by Christopher Golden
The Busting Out of an Ordinary Man by Odie Hawkins
Ashton: Lord of Truth (Lonely Lords Book 13) by Grace Burrowes
Crash for Me (The Blankenships Book 7) by Glass, Evelyn
Low Fat Low Cal Healthy Diets Under 200 Calories by Grace Gentle
Beyond The Tomorrow Mountains by Engdahl, Sylvia
Bunheads by Flack, Sophie
Adin's Adventure: How to Ruin a Rescue by Andromeda Bliss
Hannah Howell by Kentucky Bride
Dark Lord of Kismera: Knights of Kismera by Tamara H Hartl