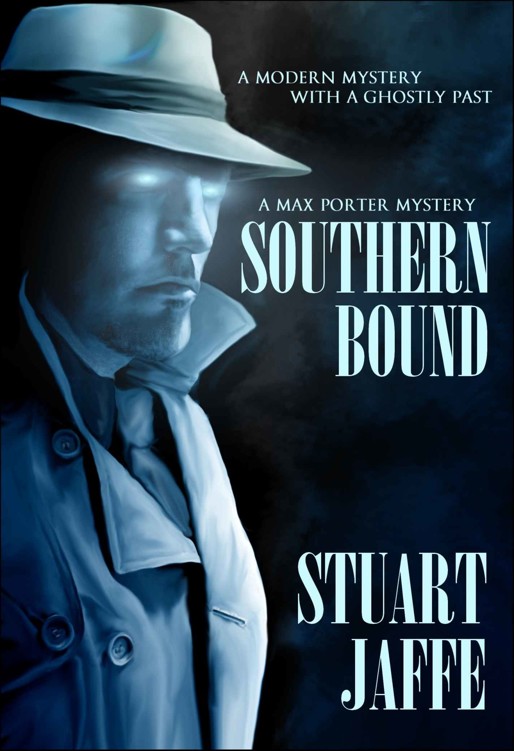 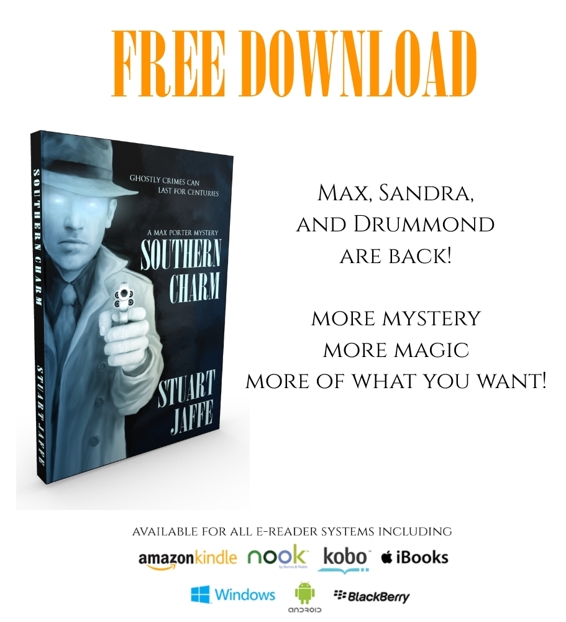 Max Porter stood at the door of his new office — old wood with a frosted-glass window; the 319 painted in gold and outlined in black. The keys jingled in his trembling right hand. His left held Sandra's hand tight. He wanted this job to go well for them. It had to.

Seven months without work had cleaned out the savings account Sandra's father started on their wedding day. They had nothing left. The endless job search during a recession had been gut-wrenching. So when an opportunity came along, even one that meant moving to the South, even one as weird as this one, Max grabbed it. Seeing Sandra's huge smile as he handed her the key made the decision feel right.

"The note didn't say anything about you."

"I know, but it was so specific about a lot of things. Maybe we should check it again."

With a girlish shrug, she kissed him quick and unlocked the door. The office dated back to the 1940s, and much of the original work remained — hardwood floors, two built-in bookcases with ornate but not obnoxious molding, a small bathroom on the opposite side, and three large windows giving view to the old Winston-Salem YMCA across the street (the word BOYS carved into the stone above one entrance, the word MEN above the other). Faux-lemon cleaners coated the air, and Max noticed the lack of dust anywhere.

He stepped closer to the bookshelves. His footsteps echoed around the high ceiling. He saw rows of reference materials — two German-English dictionaries, a full set of encyclopedias, a ten-volume local history, basic biology, geology, and physics textbooks, a few bits of fiction, and even some on divination.

"Strange," Max whispered, letting out a long breath he didn't know he had been holding.

"Got another note," Sandra said standing in front of an imposing oak desk with a heavy, leather desk chair and two less impressive guest chairs. He followed her gaze to the desk blotter where he saw a manila envelope with his name written in a fancy script bordering on calligraphy. Beneath his name, in bold block letters read — OPEN IN PRIVATE.

Sandra hugged Max long and tight. "Told you he didn't want me here."

"What makes you think my boss is a
he?
"

"Much too dictatorial for a woman."

Max thumbed the envelope's corner. His failure to deal with a dictatorial boss had led to his firing
. It was more than that,
he thought but buried those memories as fast as they threatened to emerge.

"You have your own job to get to, you know."

"Danishes and bread can wait."

"Honey, oh my, gee whiz, you should've told me you became the owner of a bakery. I can quit right now."

Chuckling, Max pointed to the door. "You're only offering that 'cause you know I can't accept."

"You'll have to wait until tonight to find out."

A man standing in the doorway cleared his throat. He wore a tailored H. Huntsman suit and smelled clean like he had just stepped from a shower. Not a whisker stood on his face nor did a hair dare to stray from its assigned location. "You're early," he said.

"We are early," Sandra said, extending her hand. "We were too excited to wait."

Mr. Modesto looked upon Sandra like an insect. "You were not to bring guests this morning."

"I was just leaving," she said, mouthing
Told you so
to Max and adding, "Have a great first day. Love you."

Sandra patted the door as she exited. He watched her move down the hall to the stairs on the end — her dark hair dancing on her shoulders, her not-too-thin
I'm a real woman
physique moving with enthusiasm. She made waking each morning worthwhile.

A hall door opened and an old lady with a coffee mug picked up her morning paper. She scowled at him. Modesto closed the door and said in his deep voice, "This building consists of apartments, some offices, and on the first floor, a small art gallery. Please keep in mind you have neighbors." With a disapproving glare, he added, "You've not opened the envelope?"

"Then I'll wait in the hall," Modesto said and stepped out.

A little part of Max, a childish, naïve part, wanted to sprint down the hall, out the building, and head straight back to Michigan. He understood Michigan — Lansing, Alpena, Kalamazoo, it didn't matter what part of the state — cold, hard, practical with a side of cutting loose. This envelope had none of those qualities. It was a bizarre way to handle business.

A book clattered to the floor, and Max jumped in his seat, letting out a girlish screech. Then he laughed at himself — hard. Modesto probably thought him mad.

Careful, Max, the South just might make you nutty.

Max recomposed himself and opened the envelope. It read:

WELCOME TO WINSTON-SALEM AND YOUR NEW OFFICE. IF YOU REQUIRE ANYTHING, DO NOT HESITATE TO CONTACT MR. MODESTO. YOUR FIRST TASK IS TO RESEARCH UNITAS FRATRUM. THE BOOKS PROVIDED HERE SHOULD SUFFICE BUT IF YOU REQUIRE ANY OTHERS, DO NOT HESITATE TO CONTACT MR. MODESTO. AT THE END OF EACH DAY, REPLACE EACH BOOK IN THE EXACT PLACE YOU FOUND IT. MAKE NO MARKS IN THE BOOKS. WITH THE EXCEPTION OF BASIC USAGE OF YOUR CHAIR, DO NOT MOVE ANY FURNITURE IN THIS OFFICE. DO NOT ADD OR REMOVE ANY FURNITURE IN THIS OFFICE. IF ANY LIGHT BULBS NEED TO BE REPLACED OR ANY OTHER SUPPLIES ARE REQUIRED, DO NOT HANDLE IT YOURSELF. PLEASE CONTACT MR. MODESTO INSTEAD.

No signature. No explanations.

He pulled open the top-right drawer and found a small ledge with three pens — nice pens, Monte Blanc. He picked one and then tried the drawer beneath. As he leaned down, he noticed some metal screwed into the underside of the desk. He had seen this type of thing before but only in old black-and-white movies. It was a gun tray meant for holding a small caliber weapon that would be pointed towards the door.

In the bottom drawer, he found one plain, spiral notebook — the kind he preferred to work with.
Well, the boss does his homework,
he thought, smirking at his own use of the male pronoun. Sandra could turn him around on many things with just a few words.

Mr. Modesto returned with his eyes surveying the office (
checking that I haven't moved anything,
Max thought), and said, "I trust everything is clear and to your satisfaction."

As much as Mr. Modesto already pushed Max's desire to spew out sarcasm, he had to focus on keeping the job. Strange orders and a pompous manager should be the last of his concerns. "Um, just one thing," he said, hating the contrition in his voice.

Gesturing to the empty desk, Max said, "No computer. I've got my own laptop. I can—"

"Our employer wishes for this room not to be altered. A technology such as that would severely alter the room."

"Perhaps our employer did not explain to you that you're to help me out. It says so in this letter."

Mr. Modesto's face tightened. "The contents of that letter are marked 'private' and you should not be divulging them to me. As for my duties, I am well aware of what I am to do."

"Our employer wants some in-depth research done, and I'm assuming he wants it done in a timely manner. Without a computer, this task will be—"

"It is a short drive to the Wake Forest campus. You will find an excellent library there which will supplement any research requirements this room does not fulfill. Including a computer."

Max held his tongue for a moment and forced a pleasant face. "My apologies. I'm sure the University will be more than enough."

"I'll be checking in this office a few times each week. If you require anything for your research that does not violate my other orders, I'll be more than willing to help you. Also ..." Mr. Modesto's eyes narrowed on the floor as he walked toward the bookshelves. In one graceful motion, he swiped the book off the floor, snapped it shut and returned it to its rightful place. Without looking at Max, Mr. Modesto said, "Keep your focus on your research. These other matters are none of your concern. Good day." He walked out of the office, never once glancing back.

Max rubbed his forehead with his sleeve. A little sweat had broken out — he had to be careful. Mr. Modesto had been working for their boss a lot longer — Max had no leverage.

He could hear Sandra warning him to keep his cool, and she was right. In this economy, he had been more than lucky to land a good-paying job. Especially considering that right before the market crumbled, Sandra had just started out as a real estate agent in Michigan. She had a few contacts in the Southern real estate world, but upon moving, they all told her the same thing — find a different job. She did, at a bakery, but that didn't bring in enough on its own. Max needed to keep his job.

With a stretch, Max stood and checked out the bookshelves. He wasn't trying to be difficult. He simply couldn't stand when people purposefully did the wrong thing because they had the power to do so. Like Mr. Modesto and this job — they wanted him to do research. No problem. Let him do the research. Don't make up all these stupid rules to control him. No computer? Don't move the furniture? Come on.

To prove his point, Max lifted the edge of the desk and set it down an inch forward. He waited. "Nope," he said to the room. "Not struck by lightning."

From the corner of his eye, he saw something. Max jumped back and scanned the office. Empty.

With cautious motions, he turned his head toward the floor. There, curving under his desk, Max saw the edges of colored lines. Something had been drawn on the floor.

His hand tapped the edge of the desk, wanting to shift it just a tiny bit more, but his heart pounded a warning. "Aw, hell. In for a penny," he said, grabbed the desk and yanked it to the side.

A large circle had been painted in red and blue. Zodiac symbols marked compass points on the circle's inside edge. Two concentric circles were inside the largest one, and each also had symbols on the inside lines, but Max did not recognize them. Painted blood red, a jagged-toothed mouth occupied the center — one of four serpent heads attached to the same body.

Cocking his head to the side, he read the words
cruor
and
teneo.
They meant nothing to him but sent shivers straight through to his hands.