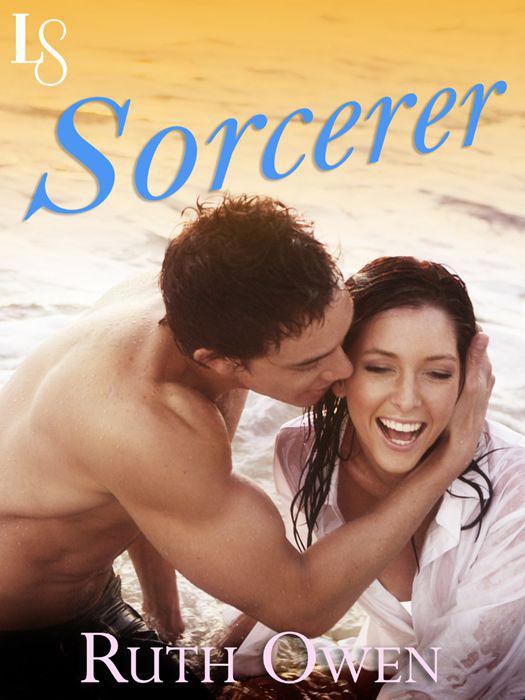 Sorcerer
is a work of fiction. Names, places, and incidents either are products of the author’s imagination or are used fictitiously.

Published in the United States of America by Loveswept, an imprint of The Random House Publishing Group, a division of Random House LLC, a Penguin Random House Company, New York.

L
OVESWEPT
is a registered trademark and the L
OVESWEPT
colophon is a trademark of Random House LLC.

Originally published in the United States by Loveswept, an imprint of The Random House Publishing Group, a division of Penguin Random House Company, New York, in 1994.

Excerpt from Lauren Layne’s
After the Kiss

The computer room was eerily silent. No diodes clicked, no disk packs whirled, no printers pounded out their endless streams of data. The floor-to-ceiling bank of monitor screens lining the front wall were either blank or showed fractured sputters of indecipherable light patterns. Gradually even those patterns weakened and disappeared, leaving nothing but blackness behind. Computer technicians sat at their keyboards, looking up at the rows and rows of empty screens in bleak dismay. Seventy-two hours ago they’d lost communication with one of the system’s programs, and the deterioration had continued at a slow but frighteningly steady pace. If the disintegration continued, the entire system would be rendered useless in less than a week.

If any of the other experimental prototype computer systems at Sheffield Industries had failed so completely, the project would have been scrapped
immediately without a second thought. But this was no ordinary computer system. This was a prototype artificial intelligence computer, a computer whose reasoning functions emulated the human mind. He was more than just a machine. His wit, heart, and notorious addiction to TV shopping had endeared him to every one of the technicians. His name was Einstein, and he was irreverent, irrepressible, and irresistible.

And, at the moment, he was very, very sick.

Two men, one blond and one dark, stood apart from the others. The blond man had his hands clasped behind him, as if fighting for control. “We’ve tried everything,” he said, his tight words betraying both his exhaustion and despair. “We’ve attempted to stimulate his processing a dozen different ways, but his vital signs continue to deteriorate. It’s as if he’s—well, if he were human, I’d say he’d fallen into a coma.”

“But he’s not human,” the dark man stated, his voice edged with the accent of his native England. He jotted a quick series of numbers on his hand-held computer pad, his lean, handsome face frowning with academic concentration. “I understand there’s another prototype. My advice is to curtail this experiment, and concentrate on the one which still functions.”

“I can’t just
curtail
Einstein,” Chris Sheffield cried. “My wife created him. He’s practically a member of the family. PINK, the other prototype, and Einstein are more than just experimental computers,
Sinclair. They’re—” He paused, struggling for a word that eluded his sleep-deprived mind. “I suppose you could call them our friends.”

Dr. Sinclair arched a dark brow in faint surprise, but kept any verbal comments to himself. He turned back to the computer monitors, scanning the bank of inactive screens with a thorough, almost mechanical precision. “Mr. Sheffield, I’m sorry about your, uh, friend, but I don’t see any hope for this system. I’ve worked with decaying neural nets before, and once the external communications linkages have been severed, there’s virtually no way to reestablish them.”

“Yes, but what about reestablishing the linkages
internally
?” Chris pulled the doctor aside, lowering his voice to a whisper. “I know about the ground-breaking work you’ve been doing in the field of virtual reality. Your company’s partnership with Sheffield Industries has put us light-years ahead of the competition, and I understand you’ve used your VR simulator to model everything from the inside of an atom to the surface of a star. But I doubt you’ve ever tackled something as immense—and as important—as what I’m about to ask you to do.”

Chris nodded toward the towering bank of monitors. “Einstein’s consciousness is trapped somewhere inside this system. I want you to use your simulator to model his interior matrix, so we can go in and find him. Can you do it?”

Sinclair had never attempted using his simulator to replicate anything that sophisticated. He ran his hand through his dark hair, thinking about the
scope, the complexity, the challenge. Suddenly he felt the fire within him, the passionate intensity that gripped him whenever he started a new and intriguing project. He started jotting down specifications, realizing that he hadn’t been this excited about anything in months, not since—

His hand slowed its frantic pace.
Good Lord, man, you can’t still be thinking about her. Other technicians have left your company for greener pastures. She’s no different from them, no different at all.
…

The doctor looked up from his notepad, and saw Sheffield staring at him with concern. “I asked if you thought you could do it?”

“Of course I can do it,” Sinclair answered angrily, though the emotion was directed wholly at himself. “I’ll get Hedges and Parker to model the environment. They’re the cybertechs who created the Mars expedition simulation for NASA last month. But I’ll need a cybernaut partner. I’ll contact my usual associate, Dr. Miller.”

“
Kyle
Miller?” Chris asked. “The one who got married last Saturday?”

Damn! Sinclair had forgotten about Miller’s wedding. He’d meant to attend, but had been so busy working on the simulator, it had completely slipped his mind. He bent his head and rubbed his sore eyes, thinking that this sort of forgetfulness was happening too much lately. Partridge had warned him that if he didn’t take some time off soon, he’d—

“We have another volunteer,” Chris said.

Sinclair looked up sharply. “Unfortunately, it’s not that simple. I need someone who understands the risks they’re undertaking when they enter the simulator.”

“This person has worked as a liaison between our two companies before
and
also has experience with Einstein.”

Over a dozen of Sinclair’s employees had worked as liaisons with Sheffield Industries—efficient, reliable communication was one of the things that had made their joint venture so successful. A man who was familiar with the procedures—and the dangers—of the neurocyber link was exactly the kind of partner Sinclair needed. “Very well. I’ll talk to him.”

“Her,” Chris corrected. “The volunteer is a woman. She worked for you up until a few months ago, when she accepted a programmer-tech position at Sheffield. I don’t know if you remember her, but her name is—”

“Yes, that’s her,” Chris said slowly, puzzled by the other man’s less than enthusiastic tone. “You gave her excellent references. But you don’t seem happy she’s agreed to help.”

“I’m not. Entering the simulator is a dangerous undertaking, and Ms. Polanski is very … inexperienced.”

“Inexperienced or not, she’s the best—no, the only—choice we’ve got,” Chris said, glancing back at the inactive computer display. As he spoke, another
one of the console indicator lights winked out. “We haven’t got much time.”

No, we don’t.
Sinclair knew that Sheffield had been dead accurate on his time predictions. If they didn’t go into the computer matrix soon, the prototype—Einstein—would decay past saving. But to enter the matrix the doctor needed the simulator, and to use the simulator he needed a cybernaut partner. Logically he knew that they were lucky that a qualified candidate had volunteered. Extremely lucky.

But he didn’t feel lucky. He turned his face away from Sheffield, his impassive mask slipping to reveal an unexpected vulnerability underneath.
Bloody hell, why did it have to be Jillie?

I will not panic
, Jillian Polanski thought as she entered the control room, but her bold resolution failed the moment she glanced up at the immense structure of steel beams, wires, and computer wizardry known collectively as the simulator. Clouds of mist spilled out from the freon units, their subzero temperatures cooling the gargantuan imaging generators, the heart of the system. The elaborate metal machine looked like a cross between a half-finished skyscraper and a medieval torture device. Or the result of a mad scientist’s nightmare.

Suspended in the dead center of the structure were the two environmental containment canisters—called “eggs” by the techs—that housed the human cybernauts while they were in the virtual reality simulator. Jill knew that once the egg’s metal door was sealed, she’d be totally cut off from the sight, sounds, and even the smells of the real world. She could
scream at the top of her lungs for hours, and no one in the outside would hear her.

She swallowed the knot of fear in her throat and tightened her grip on her bulky DataGloves.
Lord, I must have been crazy to volunteer for this
.…

“You don’t have to do this,” Marsha Valdez stated as if reading her friend’s mind. “Let Dr. Doom find another victim.”

Despite her anxiety, Jill couldn’t help smiling at Marsha’s nickname for the monstrosity’s creator. Like Jill, Marsha was employed as a cybertechnician at Sheffield Industries. But unlike Jill, Marsha had never worked for Sinclair. She’d had never met the enigmatic scientist, yet she’d described his personality to a T. “I’m not doing this for Sinclair, Marsh. I’m doing it for Einstein’s sake. Even PINK can’t contact him. Someone’s got to go in there and find out what’s happened to him, and I’m the most qualified.”

She pulled herself to her full five-foot-seven height and started to adjust the leather chin strap on her head-mounted display helmet. Her fingers shook. Damn, this wasn’t like her. Annoyed, she handed her DataGloves to Marsha and tried again.

“This thing’s too tight,” she complained as she adjusted the strap and stuffed a last unruly strand of light brown hair beneath the edge of the skull-hugging HMD helmet. Between the HMD helmet and the skin-tight “full-immersion” black bodysuit she wore, she felt like a sardine squeezed into a too-small can. But her mummy-wrap wardrobe was the least of
her worries. Truthfully, even the monolith simulator wasn’t the main problem consuming her mind.

It had been two months since she’d left Dr. Sinclair’s company for the tech position at Sheffield’s. The work had been challenging and fulfilling, yet she couldn’t seem to keep her mind from slipping back to the simulator project—and the enigmatic scientist who’d designed it.
Careful, Jill. Dragons lie in that direction.
…

“I still think you’re making a mistake,” Marsha said, interrupting her thoughts. “I know you, Jillie. I remember back in graduate school, when you fought for every lost cause on campus. You even won a few. But this is different. This thing,” she said, gesturing at the gigantic machine, “could get you killed.”