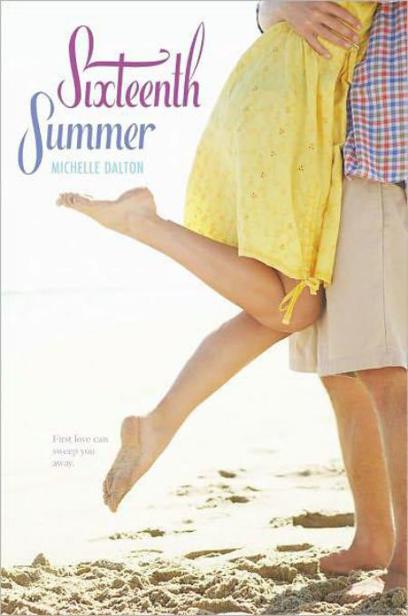 All rights reserved, including the right of reproduction
in whole or in part in any form.

The text of this book was set in Berling.

With special thanks to Elizabeth Lenhard

For Paul, for six summers and counting …

T
he first time you lay eyes on someone who is going to become
someone
to you—
your
someone—you’re supposed to feel the earth shift beneath your feet, right? Sparks will course through your fingertips and there’ll definitely be fireworks. There are
always
fireworks.

But it doesn’t really happen that way. It’s messier than that—and much better.

Trust me, I know. I know how it feels to have a
someone
.

To be in love.

But the day after my sophomore year ended, I didn’t know
anything
. At least, that’s the way it feels now.

Let me clarify that. It’s not like I was a complete numbskull. I’d just gotten a report card full of A’s. And one B-minus. (What can I say. Geometry is my sworn enemy.)

And I knew just about everything there was to know about Dune Island. That’s the little sliver of sand, sea oats, and sno-cones off the coast of Georgia where I’ve lived for my entire sixteen-year existence.

I knew, for instance, where to get the spiciest low-country boil (The Swamp) and the sweetest oysters (Fiddlehead). Finding the most life-changing ice cream cone was an easy one. You went
to The Scoop, which just happened to be owned by my parents.

While the “shoobees” who invaded the island every summer tiptoed around our famously delicate dunes (in their spotless, still-sporting-the-price-tag rubber shoes), I knew how to pick my way through the long, fuzzy grass without crushing a single blade.

And I definitely knew every boy in my high school. Most of us had known one another since we were all at the Little Sea Turtle Play School on the north end of the island. Which is to say, I’d seen most of them cry, throw up blue modeling clay, or stick Cheetos up their noses.

It’s hard to fall for a guy once you’ve seen him with a nostril full of snack food, even if he was only three at the time.

And here’s one other thing I knew as I pedaled my bike to the beach on that first night of my sixteenth summer. Or at least, I
thought
I knew. I knew exactly what to expect of the season. It was going to be just like the summer before it, and the summer before that.

I’d spend my mornings on the North Peninsula, where tourists rarely venture. Probably because the sole retail establishment there is Angelo’s BeachMart. Angelo’s looks so salt-torn and shacky, you’d never know they make these incredible gourmet po’ boys at a counter in the back. It’s also about the only place on Dune Island where you
can’t
find any fudge or commemorative T-shirts.

Then I’d ride my bike south to the boardwalk and spend my afternoon coning up ice cream and shaving ice for sno-cones at The Scoop.

Every night after dinner, Sam, Caroline, and I would call
around to find out where everyone was hanging that night. We’d all land at the beach, the deck behind The Swamp, Angelo’s parking lot, or one of the other hideouts we’d claimed over the years.

Rinse salt water out of hair.

This was why I was trying hard not to yawn as I pedaled down Highway 80. I was headed for the bonfire on the South Shore.

One thing that kept me alert was the caravan of summer people driving their groaning vans and SUVs just a little too weavily down the highway. I don’t know if it was the blazing, so-gorgeous-it-hurt sunset that was distracting them or my gold beach cruiser with the giant bundle of sticks bungeed to the basket. Either way, I was relieved when I swooped off the road and onto the boardwalk.

I tapped my kickstand down and had just started to unhook my pack of firewood when I heard Caroline’s throaty voice coming at me from down the boardwalk. I turned with a smile.

But when I saw that Caroline was with Sam—and they were holding hands—I couldn’t help but feel shocked for a moment.

In the next instant, of course, I remembered—this was our new normal. Sam and Caroline were no longer just my best friends. They were each other’s soul mate.

As of two Saturdays earlier, that was.

I don’t know why I was still weirded out by the fact that Sam and Caroline had gotten together that night. Or why I cringed whenever they gazed into each other’s eyes or held hands. (Thankfully, I hadn’t seen them kissing. Yet.)

Because the Sam-and-Caroline thing? It was really no surprise at all. There’d always been this
thing
between them ever since Sam moved to the island at age eight and settled into my and Caroline’s friendship as easily as a scoop of ice cream nests in a cone.

We even joked about it. When Sam made fun of Caroline’s raspy voice and she teased him about his gangly height; when she goosed him in the ribs and he pulled her long, white-blond ponytail, I’d roll my eyes and say, “Guys! Get a room.”

Both of them would recoil in horror.

“Oh gross, Anna!” Caroline would say, sputtering and laughing all at once.

Inevitably, Sam would respond with another ponytail tug, Caroline would retaliate with a tickle, and the whole song and dance of denial would start all over again.

But now it had actually happened. Sam and Caroline had become a Couple. And I was realizing that I’d kind of
liked
the denial.

Now I felt like I was hovering outside a magical bubble—a shiny, blissed-out world that I just didn’t get. Sam and Caroline were inside the bubble. Together.

Soon after they’d first kissed, both of them had assured me that nothing would change in our friendship, which, of course, had changed everything.

Still, Sam and Caroline were sweetly worried about my third-wheel self. And they were clearly giddy over their fresh-hatched love. So I was trying to be supportive. Which meant quickly hoisting my smile back up at the sight of them looking all cute and coupley on the boardwalk.

I eyed their empty hands (the ones that weren’t clasped tightly together, that was) and raised one eyebrow.

“Don’t tell me you didn’t bring firewood,” I complained. “I hate being the only one who did her homework.”

“Naw,” Sam said in his slow surfer-boy drawl. “We already piled it on the beach. The fire’s going to be huge this year!”

“We were collecting wood all afternoon,” Caroline said sunnily.

I couldn’t help it, my smile faded a bit.

Caroline caught my disappointment. Of course she did. Ever since The Kiss, she’d been giving me lots of long, searching looks to make sure I was okay with everything. I was starting to feel like a fish in a bowl.

“We would have called you,” she stammered, “but didn’t you have sib duty today?”

She was right. I did have to go to my little sister’s end-of-the-year ballet recital.

So why did I feel this little twinge of hurt? I’d had countless sleepovers with Caroline that didn’t, obviously, include Sam. And Sam and I had a regular ritual of going to The Swamp
for giant buckets of crawfish that were strictly boycotted by Caroline. The girl pretty much lived on fruit, nuts and seeds, and supersweet iced tea.

But ever since Sam and Caroline had gotten together, a kernel of insecurity had been burrowing into the back of my head. All I wanted to do was shake it off. But like an especially stubborn sandbur, it wasn’t budging.

This is stupid
, I scolded myself.
All that matters is that Sam and Caroline still love me and I love them
.

Just not
, the whiny voice in my head couldn’t help adding,
the mysterious way they love each other
.