Read Sing It to Her Bones Online

Sing It to Her Bones 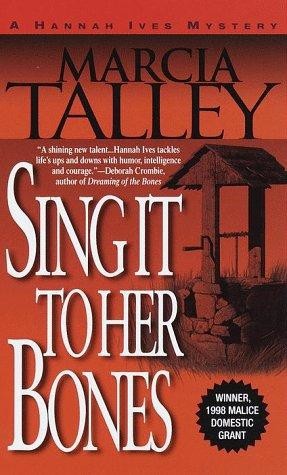 Even in that crippled condition I was still going 55 when I reached the pond and I realized with absolute certainty that, barring a miracle, I wouldn’t make it around the curve. I pressed both feet on the brake pedal, sending the car fishtailing across the centerline. As I pulled back into my lane, I was vaguely aware that the dark van was still with me, but I was too busy to think about much more than slowing the car down.
Hold on, Hannah! Here we go!

My car sailed over the ditch, shot through a hedge, ripped through a barbed-wire fence, and plunged, nose first, into the murky water of the Baxter’s pond. The last thought I had before everything went dark was not of my husband or daughter or the fear of dying but
Oh, damn, I’m going to ruin Connie’s scarf.…

PRAISE FOR SING IT TO HER BONES

“Hannah Ives is a welcome addition to the mystery landscape—smart, brave, wonderfully human, the kind of woman you want for your new best friend.
Sing It to Her Bones
is an impressive, polished debut from a writer to watch.”
—Laura Lippman, Edgar Award—winning author of
Butchers Hill

Published by
Dell Publishing
a division of
Random House, Inc.

This novel is a work of fiction. Names, characters, places, and incidents either are the product of the author’s imagination or are used fictitiously. Any resemblance to actual persons, living or dead, events, or locales is entirely coincidental.

All rights reserved. No part of this book may be reproduced or transmitted in any form or by any means, electronic or mechanical, including photocopying, recording, or by any information storage and retrieval system, without the written permission of the Publisher, except where permitted by law.

The trademark Dell
®
is registered in the U.S. Patent and Trademark Office.

W
ITHOUT THE HELP OF MANY GENEROUS PEOPLE, THIS
book would not have been possible. Any mistakes made are mine alone and should not be attributed to the individuals mentioned below.

To my husband, Barry Talley, for his love, unwavering support, and unflagging fondness for Chinese carry-out food. To Quentin Kinderman, the other sailor in my life, who would be a dangerous man should he turn to crime. To my daughters, Laura and Sarah, who were with me when Emily was born and know her better than I do. To BM3 Christopher Wellington of the U.S. Coast Guard station at Thomas Point in Annapolis for valuable information about rescue at sea. To Dr. Anthony Massey and Dr. Charles Kinzer for hypothetical glimpses inside a doctor’s files. To friends at the Naval Academy, especially David, Charles, and Bill, for whom no question was ever too off-the-wall, and my colleagues at the Naval Academy library who listened patiently to Hannah’s adventures over countless lunches.

To the Malice Domestic Conference for awarding me their grant for unpublished writers in 1998, I am everlastingly grateful. Thanks, too, to my editor, Jacquie Miller, for her perceptive suggestions and to my miracle-working agent, Jimmy Vines.

To my writers’ groups, who read every word of this manuscript, sometimes more than once—Sujata Massey, John Mann, Janice McClain, and Karen Dieg-mueller in Baltimore; and Janet Benrey, Ron Benrey, Carolyn Curtis, Ray Flynt, Mary Ellen Hughes, Trish Marshall, and Sherriel Mattingly in Annapolis—1,000,000 thanks. There’s a bit of each of you in every Hannah novel.

To my dear friends Kate Charles and Deborah Crombie, who read the final manuscript and offered constructive criticism and encouragement, and to Sara Ann Freed and Linda Sprenkle, who nagged, thanks for being the best cheerleaders a girl could ever have.

To Dr. Stanley Watkins for saving my life and to the 2,599,999 other breast cancer survivors now living in the United States from whom I draw my strength and inspiration.

I cannot bid you bid my daughter live;
That were impossible: but, I pray you both,
Possess the people in Messina here
How innocent she died; and if your love
Can labour aught in sad invention,
Hang her an epitaph upon her tomb
And sing it to her bones.…

—William Shakespeare
,
Much Ado About Nothing
,
Act 5, Scene 1

When I got cancer, I decided I wasn’t going to
put up with crap from anybody anymore. I would have quit work right then, too, but even with Blue Cross/Blue Shield paying 75 percent, the surgery and the chemo treatments cost me too much to ditch the job.

I thought about it, though. I imagined walking into her cubicle and announcing, loud enough for everyone in the office to hear, “Fran, I quit!” Just like that. And she’d look hurt and confused and go, “Buh-buh …” and I’d say, “As of
right now
!” Then I’d strut right out, past all of them standing in a line behind their desks. I imagined they’d be smiling at me and clapping.

My husband thinks it’s the job that made me sick. “All that stress,” he says. “It can’t be good for you, Hannah.” One morning while I was sitting at the kitchen table hugging a bowl of cornflakes and trying
not to throw up, he handed me an article he’d torn out of a magazine in the doctor’s office, “Stressed to Kill.” Families can be so helpful. My sisters are always sending me stuff like that. “The Anticancer Diet,” “Super-food for Women,” “Cancer: Facts vs. Feelings.” I keep it all in a manila folder by my bed, so when they visit, they think I’m reading it.

The truth is, I was born stressed. The pediatrician told my mother he had never seen a kindergarten kid with ulcers before. In first grade I went hyper when Mom brought home college-ruled notebook paper. “It says wide-ruled,” I wailed. “It says so, right-here-on-this-list.” And I fussed and whined and carried on until she drove out to the 7-Eleven after dinner and bought me exactly the right kind. I stopped having stomachaches after the second grade, so I suppose I learned to cope. You have to stay in school, don’t you? So you manage. You work it out. The same goes for jobs. And bosses.

I’m not sure when my boss, Fran, started acting like a fruitcake. She was always a little weird, kept her desk locked up tight even while she was sitting at it. Once she attended a two-day seminar at an executive hotel outside the Beltway and came back all fired up about Total Quality Management. Right away she selected six of us to form a group to meet during lunch hour for weeks in order to come up with four or five suggestions to improve our service, like making a telephone training video, installing a second fax machine, and hiring a stress management consultant. When we
submitted our list to Fran, she studied it for a long time, then grabbed a black Magic Marker from the ceramic mug on her desk and drew a heavy line through the “stress management consultant.” “We don’t have stress here,” she said. We all gasped, and I swore to everyone in the lunchroom afterward that I saw the papers on her desk flutter.

So this is how I’m dealing with the stress we don’t have at our office. I tell myself I’m in it for the benefits and the money, the paycheck that lets me get on with my life. I have hopes! I play the lottery when I think about it, and every year I order a magazine or two by licking and sticking those itty-bitty picture stamps. But face it, the Prize Patrol from Publishers Clearing House is not going to knock on my door with a check for ten million dollars. So I show up at the office, day after day, or visit the doctors when I have to, like an actor in a long-running play who knows his lines and doesn’t have to think about them much anymore. It’s a show, one act following another.

Emily Jean, in an uncharacteristic display of pragmatism, thought that one up. “Look, Mother,” she said to me one day when I was feeling particularly exhausted and depressed because my hair was thinning out. “It’s like you’ve got these two missions. Remission, that’s one, and you’re working hard on that. Then intermission. Those are the good times between the acts that make all of this other shit bearable.”

“God, yes!” I agreed, but all the time she was talking I was thinking,
The way I feel right now, I’d have to
rally to die
. I didn’t tell her that, though. I didn’t want her to worry. “You’re absolutely right, pumpkin,” I said instead. “Let’s get to work on those intermissions.”

I had been contemplating a weekend at Virginia Beach or a two-week cruise in the British Virgin Islands. England, maybe. As it turned out, that cute little cottage in the Cotswolds was going to have to wait. Like I read somewhere, life is what happens when you’re making other plans.

It’s called downsizing or rightsizing. Reduction in force. A RIF. Whatever. It means you’re fired. A quality management team somewhere on the tenth floor had been throwing darts at our organizational chart, pinning a major portion of Whitworth & Sullivan’s Technical Support Department to the wall, smack dab through the
o
in
Support
.

Fran, we heard later, had gone all glassy-eyed and sullen when they told her, refusing to believe that half her staff was about to be tossed onto the street. “It’s a business decision,” they explained, and gave her two days to get with the program. She stonewalled, so they called in the managing partner, an ex-marine named Cooper, who had no qualms about summoning us individually to the firm’s best conference room, offering coffee or juice—the charming, disarming, oh-so-personal touch—and then, whack! kneecapping us with the news.

When it was my turn, I chose an upholstered chair opposite Fran with about as much enthusiasm as a
candidate for a root canal. Nobody said anything at first. While Coop thumbed through the papers stacked in front of him, as if trying to remember my name, I settled uncomfortably into the chair, attempting to blend inconspicuously into the gold damask, a little hard to do when you’re wearing a red plaid dress. I crossed my right leg over my left, then, because I was nervous, tucked my right patent leather toe behind my left calf. It’s a bad habit I picked up somewhere. It makes me look like a pretzel.

Outside that window in Washington, D.C., two floors down, I knew K Street would be alive with lunch-hour traffic. Attorneys and secretaries, bankers and lobbyists, folks who still had jobs would be heading out to drop a small fortune at Charlie’s Crab or a few bucks over at the Lunch Box. It was a day to take your lunch to Farragut Square and sit in the sun. Let it soak through your skin and warm your bones, bones like mine, which had been sucked cold by the air-conditioning.

Inside, while Coop oozed on about severance pay and maintenance of health benefits, I stared at Fran, who sat straight-backed and immobile, like an ice sculpture. I willed her to look at me, but she focused on his reflection in the tabletop. If Jones of New York had issued shotguns along with its suits, I thought, Old Cooper’s shirtfront would have been a sodden mass of red and we would have been picking bits of lung and rib out of the oriental carpet. I concentrated on the way his yellowish hair sprouted from his upper forehead in spiky clumps and how his earlobes wobbled
when he talked. Frankly, when he laid the news on me, I didn’t know whether to run out and hire a lawyer to sue his ass or fall down and kiss his feet.