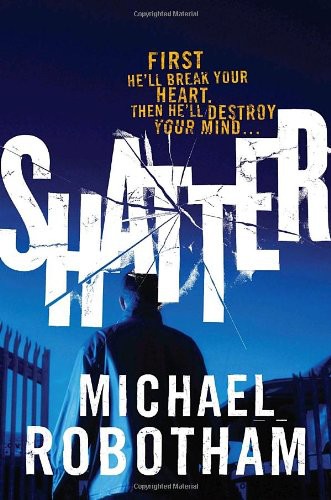 Winner of Australia's Ned Kelly Award for Best Novel, Robotham's compelling fourth thriller (after
The Night Ferry
) finds clinical psychologist Joe O'Loughlin and his family in Somerset, where he teaches part-time at the University of Bath. When Joe fails to persuade a suicidal woman not to leap from a bridge to her death, he becomes obsessed with understanding the woman's motives. The woman's grief-stricken teenage daughter tracks down Joe, but the police don't take notice until another woman ends up dead under suspicious circumstances. Joe calls on an old friend, retired London detective inspector Vincent Ruiz, and together they race to catch a killer who uses psychological techniques Joe recognizes from his own practice to destroy people. Robotham smoothly mixes Joe's investigation and personal struggles with glimpses into the killer's mind. Even the sharpest readers may not anticipate all of the plot's agile switchbacks or foresee the chilling climax.
(Mar.)
Copyright © Reed Business Information, a division of Reed Elsevier Inc. All rights reserved.

International Acclaim for SHATTER
SHATTER, by Michael Robotham
Gideon Tyler, the deranged villain of this exceptional suspense novel, is a devil so persuasive he’s able to talk his victims into killing themselves. His opposite number; psychologist Joe O’Loughlin, must match wits with Tyler to save his wife and child from deaths almost too horrible to contemplate. Don’t get into the second half of this book before the Green Day concert, or you’ll end up staying home to see how it all comes out.
--
Stephen King
, writing for
Entertainment Weekly

“
Shatter
will have you turning the pages compulsively, desperate to get to the end, but not daring to miss a word.” —
The Times
(London) 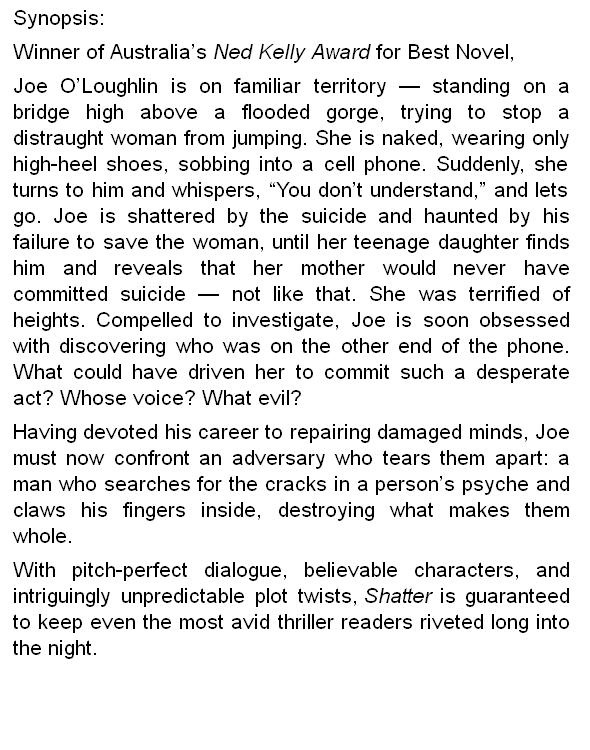 Joe O’Loughlin is on familiar territory — standing on a bridge high above a flooded gorge, trying to stop a distraught woman from jumping. She is naked, wearing only high-heel shoes, sobbing into a cel phone. Suddenly, she turns to him and whispers, “You don’t understand,” and lets go. Joe is shattered by the suicide and haunted by his failure to save the woman, until her teenage daughter finds him and reveals that her mother would never have committed suicide — not like that. She was terrified of heights. Compel ed to investigate, Joe is soon obsessed with discovering who was on the other end of the phone. What could have driven her to commit such a desperate act? Whose voice? What evil?

Having devoted his career to repairing damaged minds, Joe must now confront an adversary who tears them apart: a man who searches for the cracks in a person’s psyche and claws his fingers inside, destroying what makes them whole.

With pitch-perfect dialogue, believable characters, and intriguingly unpredictable plot twists,
Shatter
is guaranteed to keep even the most avid thril er readers riveted long into the night. 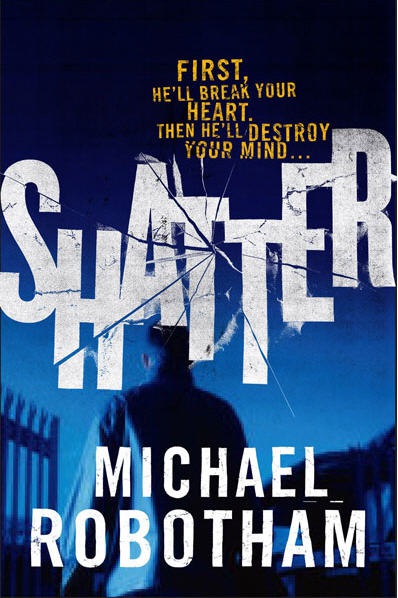 (aka The Sleep of Reason)

The third book in the Joseph O’Loughlin series

This is for Mark Lucas, a friend first.

The sleep of reason produces monsters.

The words of his mouth were smoother than butter, but war was in his heart: his words were softer than oil, yet were they drawn swords.

There is a moment when all hope disappears, all pride is gone, all expectation, all faith, all desire. I own that moment. It belongs to me. That’s when I hear the sound, the sound of a
mind breaking.

It’s not a loud crack like when bones shatter or a spine fractures or a skull collapses. And it’s not something soft and wet like a heart breaking. It’s a sound that makes you wonder
how much pain a person can endure; a sound that shatters memories and lets the past leak into the present; a sound so high that only the hounds of hell can hear it.

Can you hear it? Someone is curled up in a tiny ball crying softly into an endless night.

It’s eleven o’clock in the morning, late September, and outside it’s raining so hard that cows are floating down rivers and birds are resting on their bloated bodies.

The lecture theatre is ful . Tiered seats rise at a gentle angle between the stairs on either side of the auditorium, climbing into darkness. Mine is an audience of pale faces, young and earnest, hung over. Fresher’s Week is in ful swing and many of them have waged a mental battle to be here, weighing up whether to attend any lectures or go back to bed. A year ago they were watching teen movies and spil ing popcorn. Now they’re living away from home, getting drunk on subsidised alcohol and waiting to learn something.

I walk to the centre of the stage and clamp my hands on the lectern as if frightened of fal ing over.

‘My name is Professor Joseph O’Loughlin. I am a clinical psychologist and I’l be taking you through this introductory course in behavioural psychology.’

Pausing a moment, I blink into the lights. I didn’t think I would be nervous lecturing again but now I suddenly doubt if I have any knowledge worth imparting. I can stil hear Bruno Kaufman’s advice. (Bruno is the head of the psychology department at the university and is blessed with a perfect Teutonic name for the role.) He told me, ‘Nothing we teach them wil be of the slightest possible use to them in the real world, old boy. Our task is to offer them a bul shit meter.’

‘If they work hard and take a little on board, they wil learn to detect when someone is tel ing them complete bul shit.’

Bruno had laughed and I found myself joining him.

‘Go easy on them,’ he added. ‘They’re stil clean and perky and wel -fed. A year from now they’l be cal ing you by your first name and thinking they know it al .’

How do I go easy on them, I want to ask him now. I’m new at this too. Breathing deeply, I begin again.

‘Why does a wel -spoken university graduate studying urban preservation fly a passenger plane into a skyscraper, kil ing thousands of people? Why does a boy, barely into his teens, spray a schoolyard with bul ets, or a teenage mother give birth in a toilet and leave the baby in the wastepaper bin?’

‘How did a hairless primate evolve into a species that manufactures nuclear weapons, watches
Celebrity Big Brother
and asks questions about what it means to be human and how we got here? Why do we cry? Why are some jokes funny? Why are we inclined to believe or disbelieve in God? Why do we get turned on when someone sucks our toes? Why do we have trouble remembering some things, yet can’t get that annoying Britney Spears song out of our heads? What causes us to love or hate? Why are we each so different?’

I look at the faces in the front rows. I have captured their attention, for a moment at least.

‘We humans have been studying ourselves for thousands of years, producing countless theories and philosophies and astonishing works of art and engineering and original thought, yet in al that time this is how much we’ve learned.’ I hold up my thumb and forefinger a fraction of an inch apart.

My left arm trembles at my side.

‘Did you see that?’ I ask, raising the offending arm. ‘It does that occasional y. Sometimes I think it has a mind of its own but of course that’s impossible. One’s mind doesn’t reside in an arm or a leg.

‘Let me ask you al a question. A woman walks into a clinic. She is middle aged, wel -educated, articulate and wel -groomed. Suddenly, her left arm leaps to her throat and her fingers close around her windpipe. Her face reddens. Her eyes bulge. She is being strangled. Her right hand comes to her rescue. It peels back the fingers and wrestles her left hand to her side. What should I do?’

A girl in the front row nervously raises her arm. She has short reddish hair separated in feathery wisps down the fluted back of her neck. ‘Take a detailed history?’

‘It’s been done. She has no history of mental il ness.’

Another hand rises. ‘It is an issue of self harm.’

‘Obviously, but she doesn’t
choose
to strangle herself. It is unwanted. Disturbing. She wants help.’

A girl with heavy mascara brushes hair behind her ear with one hand. ‘Perhaps she’s suicidal.’

‘Her left hand is. Her right hand obviously doesn’t agree. It’s like a Monty Python sketch. Sometimes she has to sit on her left hand to keep it under control.’

‘Is she depressed?’ asks a youth with a gypsy earring and gel in his hair.

‘No. She’s frightened but she can see the funny side of her predicament. It seems ridiculous to her. Yet at her worst moments she contemplates amputation. What if her left hand strangles her in the night, when her right hand is asleep?’

‘There are no obvious neurological deficits— no paralysis or exaggerated reflexes.’