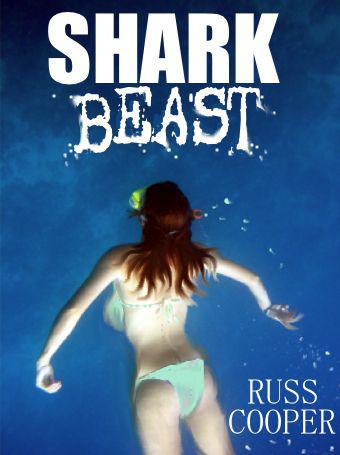 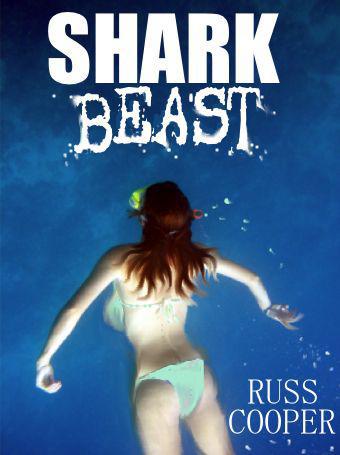 Two--Too Many Dumb Hot Chicks In My Life

(After reading "Shark Beast," at the end of the book find a free bonus sneak peek at the sequel -- this time, a young and sexy band of film-makers make a quickie Sci-Fi style "Shark Beast" exploitation movie, on the very beach the attacks happened one year earlier.

Distracted by the sexy behind-the-scenes movie hijinx, they don't notice the REAL shark beast is about to make a guest appearance...)

With a belligerent pout, she reached behind her back--
flick!
--cast the bra off with the salted breezes, a silk whisper into the night. She was drunk, but--
so what? I don't even care if someone sees.

I
hope
someone sees, what of it?

Miami Prague was one knockout of a 19-year-old, standing there, drowsy and delightfully unsteady, smiling wickedly at the midnight ocean. She was supposed to be at work, her stupid little part-time job on the boardwalk, at the stupid little "Hermit Crab's Used Books" beach bookstore. Finishing up her shift. But...

She stood there--topless!
que
scandalous!--in the curtains of midnight, at the ebbing edge of the ocean, as diamond glitters of sand sifted through perfect toes. She supposed if she had to, if she wanted to, she could get the job back. A little flirting with the assistant manager--that little ska-surfer wannabe--yeah, he'd hire her back. Probably on the spot. Guys were like that. Especially dumb ska-surfer ones.

Imagine what he'd do for me if he could see me now,
she mused with a lopsided giggle. Probably even give her a raise.

"Dream on, dude,"
she whispered.
Too little, too late.

But--enough about the job she currently didn't have.
Who cares? What of it? Enjoy the night!
That's what it was all about. And that she did, as she puckered exaggeratedly-- tasting the saltiness of the evening, letting the breeze brush against the soft plush of her lips.
This must be like kissing me
, she thought.
Don't know what you're missing, dude.
For a moment, the possibility of embarrassment--girl, you are so conceited!--but it passed. After all, she mused,
It's true, isn't it?

She looked at her beautiful reflection in the ebbing waves.
Yes. What of it?
And, since it was a sin to waste a pucker, she blew her reflection a kiss.

Taking a deep breath now, letting the saltiness cool against her breasts. A faraway sigh.

Pouting again, she stepped--one toe--into the foaming wetness, and continued gazing at her beautiful reflection, looking wobbily back up at her. She watched herself watching, let her mind ebb, as her image undulated and pulsed in the liquid blue. Her mind emptied, until all there were, were bits of nonsense, non-sound, images and shapes and shadows, and colors--a lot of distracting thoughts, some naughty, others naughtier still--her smile widened, letting the night know she liked it that way--

There was a streak in the water. Shooting star, reflection, most likely;
what else could it be, right?
It spiraled, ran off, sparkled past...
so beautiful...

"Expect me to come back begging for a stupid job? So what, so I can watch you date... some
slut?
I don't think so," she whispered, and her reflection laughed at her audacity. "After all, let's face facts, people..."

She gave her reflection a wicked drunken wink.

And then, as if agreeing, with abrupt weirdness--the sand beneath her feet--moved.

And, with another sharply sudden movement, she sank about a foot into the beach. The sand shifted again, and she was up to her knees--in what?
Quicksand?
Do they even have that out here--?
Miami cried out, a staggered gasp, for suddenly, in the little dune-shapes around her sunken legs--

A
lot
of blood.

And then: pain. A
lot
of pain. Miami tried to scream. Tried very hard. Her face, her reflection in the ebbing tide, begged, pleaded, help me,
help me scream
--

But nothing, not even a gasp, not a whisper. She was up to her torso now. Then she heard it, a horrible sound, an atrocious, unbelievable sound--

The scream came, finally, useless now, for the sand shifted again, and she dropped--too little, too late. Not much left to reflect in the waves. And then, after a violent shudder and rabid jerk--and a raw splatter of red against those wicked cheeks--

Nothing but a bikini top, over by the leaves, resting with a breezy flutter, on the very edge of the beach.

~ ~ TWO ~ ~
In The Hermit Crab Used Bookstore:
Too Many Dumb Hot Chicks In My Life

It was late at the Hermit Crab Used Books beach bookstore, and the assistant manager, a young ska wannabe named Hoagie Grisham, rubbed his crewcut has he stared down into the cash drawer.

In it: a large plastic spider.

Hoagie stared at it blankly, no expression at all, as he tossed a check on top of it and slowly closed the drawer.

"Thanks, come again," he muttered to the old lady, as he handed over her change, and her copy of a hundred-year-old Jackie Collins.

"Whatever," said the old lady.

Hoagie watched her leave, fighting-- for the billionth time in his career as a minimum-wage-plus (barely) bookstore monkey --to say something. It was tough, just standing there, having to take crap from someone who was standing just a bit over
there,
and who also knew you had to stand
here
and take said crap, which, of course, made it all the more insulting--which, of course, they
knew
made it all the more insulting, and they
knew
you knew... Oh, what he wouldn't like to do but just lean forward, get all Clint Eastwood and say, with a delicious smirk...

You don't like the nice view we have here, of the ocean, that nice sandy, beachy beachy wonderland?

With a sigh, he just--for the billion and first time--watched her go, saying nothing.

"Scary, huh?" a sarcastic female voice said over his shoulder. "That little surprise in your drawer? Hope it didn't 'gotcha' too bad."

Another Hoagie sigh. "I can barely contain myself."

Hoagie didn't bother turning around. He knew who it was. Luna Bloodlove. And yes, that was her real name, not a stripper name, or so she claimed when he make the big mistake and hired her three weeks ago. He considered himself a good assistant manager type, but man, even he had to admit:
I am totally bad at hiring folks.
First this Luna nutcase, with her incense and big boobs and smart mouth, and then that Miami chick with her flirty games and big boobs and smart mouth, who doesn't even show up for her shifts, like tonight--

Too many dumb hot chicks in my life,
he thought with a sigh.

"Whatever," Hoagie shrugged, as he started counting the register.

Hoagie finally gave her a look, one of his stern I'm-your-boss specials; it faltered a bit when he saw she was dressed hippy-crazy as always. She smiled, unimpressed by his "bossitude." With a weary smirk, he started recounting. "Why are you even here, Loon-a?" he asked, flipping through the bills. "You weren't on schedule. And we all know you can't read, so... why are you here?"

"Oh, boss jr. made a funny, how cute. For someone who's supposed to be all punk and ska and 666, you're not very hardcore."

Luna gave a pointed look. "Mmmm .... what's the opposite of hardcore?" She six-gunned him with her painted nails.
That would be yooou
, she mouthed.

Hoagie, counting, "I still can hear you, you know."

She shrugged, fingered a few stray coins. "Whut-ever." She laughed emptily. "What a life you lead."

Hoagie fought the urge to give her a glare. "Why do you keep saying that? You work at the same place I do."

"Yah, yah, whatever," he scoffed. "What do you do that's so hardcore? Look where you live ... You live in a trailer."

Luna rolled her eyes dismissively--
like you know anything about anything
--then slipped him a big sneaky grin.

With a smirk, Luna yanked something from underneath the counter, and, with her usual subtlety
slammed
it on top of the counter. With a dim glazed look, he gaped down at ... a Ouija board--homemade and wonky, a patented Luna-painted piece of weirdness.