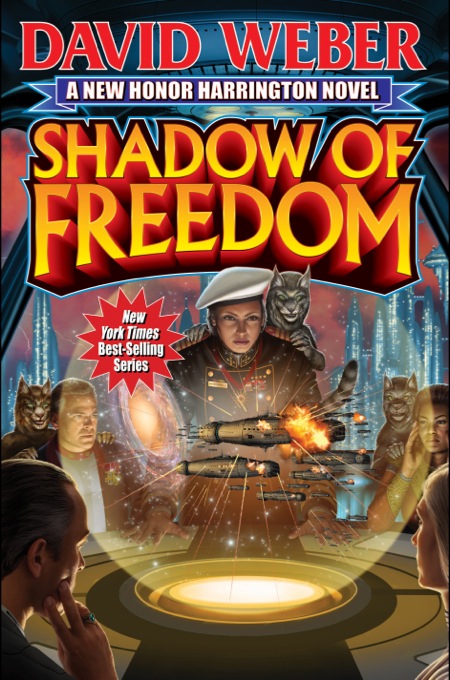 The Honor of the Queen

Crown of Slaves
(with Eric Flint)

Torch of Freedom
(with Eric Flint)

Storm from the Shadows

The Service of the Sword

EMPIRE FROM THE ASHES:

Empire from the Ashes
(omnibus)

The War God’s Own

March to the Sea

March to the Stars

Path of the Fury

The Stars At War

The Stars At War II

For a complete listing of Baen titles by David Weber, please go to www.baen.com.

“It’ll be easier the next time…and there
will
be a next time. There always is.”

The wingless, saucer-like drone drifted through the wet, misty night on silent counter gravity. The fine droplets of rain sifted down in filmy curtains that reeked of burned wood and hydrocarbons and left a greasy sensation on the skin. Despite the rainfall, fires crackled noisily here and there, consuming heaps of wreckage which had once been homes, adding their own smoke and soot to the atmosphere. A faint, distant mutter of thunder rolled through the overcast night, though whether it was natural or man-made was difficult to say.

The drone paused, motionless, blacker than the night about it, its rain-slick, light-absorbent coat sucking in the photons from the smudgy fires which might otherwise have reflected from it. The turret mounted on its bottom rotated smoothly, turning sensors and lenses towards whatever had attracted its attention. Wind sighed wearily in the branches of sugar pine, crab poplar, and imported Terran white pine and hickory, something shifted in one of the piles of rubble, throwing up sparks and cinders. A burning rafter burned through and collapsed and water dripped from rain-heavy limbs with the patient, uncaring persistence of nature, but otherwise all was still, silent.

The drone considered the sensor data coming to it, decided it was worth consideration by higher authority, and uploaded it to the communications satellite and its operator in far distant Elgin City. Then it waited.

The silence, the rain, and the wind continued. The fires hissed as heavier drops fell into their white and red hearts. And then—

The thunderbolt descended from the heavens like the wrath of Zeus. Born two hundred and sixty-five kilometers above the planet’s surface, it traced a white line from atmosphere’s edge to ground level, riding a froth of plasma. The two hundred-kilo dart arrived without even a whisper, far outracing the sonic boom of its passage, and struck its target coordinates at thirty times the speed of sound.

The quiet, rainy night tore apart under the equivalent of the next best thing to two and a half tons of old-fashioned TNT. The brilliant, blinding flash vaporized a bubble of rain. Concussion and overpressure rolled out from its heart, flattening the remaining walls of three of the village’s broken houses. The fury of the explosion painted the clouds, turned individual raindrops into shining diamonds and rubies that seemed momentarily frozen in air, and flaming bits and pieces of what once had been someone’s home arced upward like meteors yearning for the heavens.

“Thank you used a big enough hammer, Callum?” the woman in the dark blue uniform of a lieutenant in the Loomis System Unified Public Safety Force asked dryly.

She stood behind the drone operator’s comfortable chair, looking over his shoulder at the display where the pinprick icon of the explosion flashed brightly. The operator—a sergeant, with the sleeve hashmarks of a twenty-T-year veteran—seemed to hesitate for just a moment, then turned his head to look at her.

“Unauthorized movement in an interdicted zone, Ma’am,” he replied.

“And you needed a KEW to deal with it?” The lieutenant arched one eyebrow. “A near-deer, do you think? Or possibly a bison elk?”

“IR signature was human, Ma’am. Must’ve been one of MacRory’s bastards, or he wouldn’t’ve been there.”

“I see.” The UPS officer folded her hands behind her. “As it happens, I was standing right over there at the command desk,” she observed, this time with a distinct bite. “If I recall correctly, SOP is to clear a KEW strike with command personnel unless it’s time-critical. Am I mistaken about that?”

“No, Ma’am,” the sergeant admitted, and the lieutenant shook her head.

“I realize you like big bangs, Callum. And I’ll admit you’ve got a better excuse than usual for playing with them. But there are Regs for a reason, and I’d take it as a personal favor—the kind of favor which will keep your fat, worthless, trigger-happy arse in that comfortable chair instead of carrying out sweeps in the bush—if you’d remember that next time. Do you think you can do that for me?”

“Yes, Ma’am,” the sergeant said much more crisply, and she gave him a nod that was several degrees short of friendly and headed back to her station.

The sergeant watched her go, then turned back to his display and smiled. He’d figured she’d have a little something to say to him, but he’d also figured it would be worth it. Three of his buddies had been killed in the first two days of the insurrection, and he was still in the market for payback. Besides, it gave him a sense of godlike power to be able to call down the wrath of heaven. He’d known Lieutenant MacRuer would never have authorized the expenditure of a KEW on a single, questionable IR signature, which was why he hadn’t asked for it. And if he was going to be honest about it, he wasn’t really certain his target hadn’t been a ghost, either. But that was perfectly all right with him, and his intense inner sense of satisfaction more than outweighed his superior’s obvious displeasure.

This time, at least,
he amended silently.
Catch her in a bad mood, and the by-the-Book bitch is just likely to make good on that reassignment
. He shook his head mentally.
Don’t think I’d like slogging around in the woods with those people very much
.

“Confirm impact, Ma’am,” Missile Tech 1/c George Chasnikov reported. “Looks like it drifted fifteen or twenty meters to planetary west of the designated coords, though.” He shook his head. “That was sloppy.”

“Was the problem at their end, or ours?” Lieutenant Commander Sharon Tanner had the watch. She also happened to be SLNS
Hoplite
’s tactical officer, and she punched up the post-strike report on her own display as she spoke. “I’m not real crazy about ‘sloppy’ when we’re talking about KEWs, Chaz.”

“Me neither, Ma’am,” Chasnikov agreed sourly. “Reason I brought it up, actually.” He shook his head, tapping a query into his console. “I hate those damned things,” he added in a mutter Tanner knew was deliberately just loud enough for her to hear.

She let it pass. Chasnikov was an experienced, highly valued member of her department, a lifer who would stay in SLN uniform until the day he died, and every TAC officer he ever served under would be lucky to have him. That bought him a little extra slack from someone like Sharon Tanner.

Not that he didn’t have a point, she thought bitterly, reflecting on all the things
Hoplite
and her small squadron had been called upon to do over the past few weeks. Compared to some of those, expending a single kinetic energy weapon on what had probably been a ghost target was small beer.

“Their end, it looks like, Ma’am,” Chasnikov said after a moment. “It didn’t miss the designated coordinates; it missed the
amended
coordinates. They sent us a correction, but it was too late to update the targeting queue.”

“And did they happen to tell us what it was they wanted us to kill
this
time? Or if we got it?”

“No, Ma’am. Just the coordinates. Could’ve been one of their own battalions, for all I know. And no strike assessment, so far.”
And there won’t
be
one, either…as usual
, his expression added silently.

“I see.” Tanner rubbed the tip of her nose for a moment, then shrugged. “Write it up, Chaz. Be sure to make it clear we followed our checklist on the launch. I’ll pass it along to Commander Diadoro. I’m sure he and the Skipper will…reemphasize to Groundside that little hiccups when you’re targeting KEWs can have major consequences. And emphasize that they didn’t give us a clear target description, either. We can’t go around wasting the taxpayers’ KEWs without at least knowing what we’re shooting at.””

And I hope Captain Venelli uses that little memo to rip someone a new asshole
, she added silently.
Chaz is right, we’ve done too damned much of this kind of shit. I don’t think there’s anything
left
down there that’s genuinely worth a KEW, and anything that discourages those bloodthirsty bastards from raining them down on some poor damned idiot with a pulse rifle schlepping through the shrubbery all by himself will be worth it
.

There were many things Sharon Tanner had done in her Frontier Fleet career of which she was proud; this wasn’t one of them.

Back in the shattered ruins which had once been a village named Glen mo Chrìdhe, the sound of rain was overlaid by the heavier patter of falling debris. It lasted for several seconds, sparks bouncing and rolling through the wet as some of the still-burning wreckage struck, and then things were still once more. The crater was dozens of meters across, deep enough to swallow an air lorry…and more than enough to devour the cellar into which the thirteen-year-old boy had just darted with the food he’d been able to scavenge for his younger sister.

“They got Tammas.” Erin MacFadzean’s voice was flat, worn and eroded by exhaustion and gradually swelling despair. She looked across the dingy basement room at Megan MacLean and her expression was bitter. “Fergus just reported in.”

“Where?” MacLean asked, rubbing her weary eyes and clenching her soul against the pain of yet another loss.

“Rothes,” MacFadzean replied. “The Uppies stopped the lorry on its way into Mackessack.”

“Is he alive?” MacLean lowered her hands, looking across at the other woman.

“Fergus doesn’t know. He says there was a lot of shooting, and it sounds like he was lucky to get away alive himself.”

MacLean laid her hands flat on the table in front of her, looking down at their backs for a moment, then inhaled deeply. It shamed her to admit it, but she hoped Tammas MacPhee hadn’t been taken alive, and wasn’t that a hell of a thing to be thinking about a friend she’d known for thirty T-years?