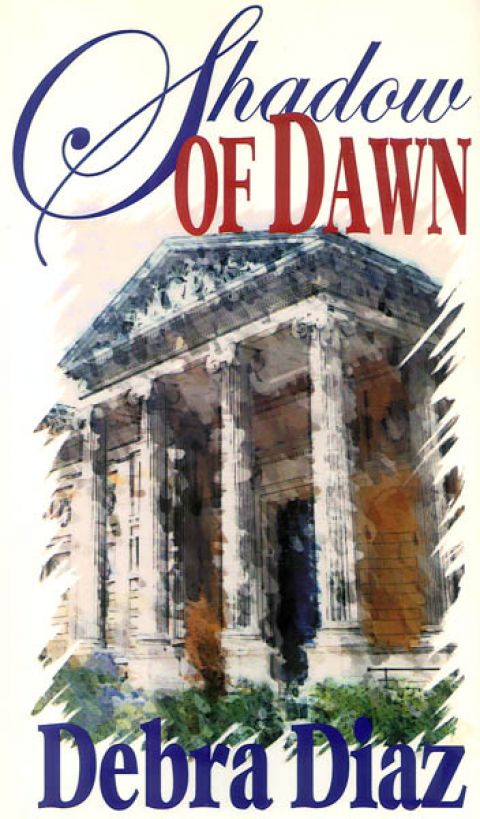 REVIEWS OF
SHADOW OF DAWN

“Kudos for Debra Diaz. With a fine eye for
detail and a keen ear for nuance, she brings the South to life in a
mesmerizing tale set in the dark days of the Civil War. Diaz
creates a lovable heroine and adds enough surprises to keep you
turning pages.
Shadow of Dawn
is a ‘must read’ for history
buffs…and for anyone who loves a good story chock full of love,
honor and courage.”

“In the finest tradition of southern writers,
Debra Diaz has crafted a great story of historically-authentic
fiction and tells it well.
Shadow of Dawn
is a masterfully
written, gripping tale of romance, intrigue and espionage set in
the turbulent days of the Civil War.”

“With the detail of historical fiction, the
action of a spy thriller, and the passion of a romance novel, Debra
Diaz’s
Shadow of Dawn
transports the reader to Richmond,
Virginia, at the height of the Civil War. The unexpected twists and
turns of the plot result in a real page-turner…The faith, courage
and determination of so long ago still speak to our age.”

This e-book is licensed for your use only. It
may not be re-sold or digitally reproduced for use by another
person. Thank you for respecting the work of this author.

I
t seemed impossible
that as the country stood on the brink of war, she’d married a man
she barely knew. The clash and roar of battle had been raging from
Virginia to New Orleans for more than a year now, and she’d not
seen her husband since the morning after their wedding, when he had
ridden off to join the army—but that would change very soon.

Catherine heard the train before she saw it,
heard the hiss of its engine and the rumble of tracks as it slowly
crossed the trestle high over the James River. Her green bonnet
shielded her from the faint drizzle of rain—and from the
sympathetic look she knew was on the face of her uncle, Martin; not
that she didn’t want his sympathy, or need it. “No doubt his wounds
are serious,” Martin said. “I think you’d better prepare yourself,
my dear.”

Catherine felt her stomach tighten. A whiff
of cold wind stirred a few strands of russet hair from beneath her
bonnet and brought a flush of pink across the high cheekbones and
slim nose. The green fabric of her bonnet and cloak deepened the
grayish-green shade of her eyes to emerald, but they were troubled
in expression, almost fearful. She closed them for a moment, trying
not to remember things she’d read in the newspapers, things she’d
heard whispered during social gatherings, things she’d seen herself
in the city’s hospitals.

Cannon balls, exploding shells, flying
bullets—all had horrific effects upon the human body. It was bad
enough to observe these effects on strangers, but one’s
husband—Catherine stopped in mid-thought as the realization struck
her again that the man who would soon accompany her home
was
practically a stranger.

With a screech of brakes, the train rolled
into the station and stopped. Passengers, mostly women and
children, began climbing down the steps. They must be refugees, she
thought, the most recent victims of the war. She’d heard nearby
Fredericksburg had been evacuated in anticipation of yet another
attempt by the Union Army to capture Richmond.

She knew they ought to at least offer someone
a ride, but somehow she couldn’t move, could hardly think.

A woman disembarked, very thin in a gray
dress and white apron, with dark hair pulled severely back beneath
a black bonnet. She turned to await someone else, extending her
hand. A man’s gloved hand descended upon her arm.

Catherine heard her own involuntary gasp of
surprise as she watched the man lean heavily on the woman in gray.
She saw that his other hand grasped a slender black cane. As her
gaze moved upward, she stifled another gasp, only vaguely aware of
Martin taking her arm.

There could be no doubt he was her husband,
though his frock coat hung more loosely about his tall frame. It
was the same pale yellow coat he’d worn as he rode away to war,
before he’d acquired his uniform. Beneath it he wore a black shirt
and black trousers. Around his entire head was a black hood or
scarf, covering even his eyes. Though he leaned on the woman, he
held the cane out before him, as if—

“He’s blind,” she heard Martin say, his voice
reflecting her own awed sense of disbelief.

The two advanced slowly. The woman held a
large black umbrella over their heads. Perhaps forty or more years
of age, she was plain and unsmiling, with an air of steely
determination. Her owlish, slate-gray eyes swept Catherine grimly
from head to toe.

Catherine stared at her husband. He seemed
taller than she remembered, perhaps because a certain heaviness had
fallen away; he looked lean and fit but for his obvious weakness.
The black scarf completely enshrouded his head and neck. Two small
holes had been cut where his nostrils must be. Black gloves made of
soft leather concealed both hands.

The pair stopped. Catherine stood speechless,
finally turning toward her uncle with a look of helplessness.

“Hello, Andrew,” Martin said, too loudly, too
cheerfully. He reached out to shake the man’s hand, realized his
mistake, and let his own hand fall.

“Hello, Catherine,” Andrew said, in a voice
barely above a whisper. “Thank you for coming, Martin. Is Sallie
with you?”

“No, I’m afraid…that is, I regret to say she
was unable to come.”

“How do you do?” Mrs. Shirley extended her
free hand in an almost mannish fashion. Catherine took the
proffered hand, noting absently its firm, almost painful grip.

Catherine had been prepared for, had even
expected, missing limbs, scars, perhaps a patch over one sightless
eye. But this black-garbed being, faceless, with hardly a voice to
speak with—somehow Catherine felt completely taken aback.

The carriage rocked lightly over the
cobblestoned street. Martin seemed to consider speaking, but Mrs.
Shirley’s unblinking stare discouraged conversation. Even a simple
“How was your trip?” seemed inappropriate.

The black hood over Andrew’s face revealed
nothing of the shape or contours of the features beneath.
Distortions and scars were left to her imagination—and Catherine
had a fertile one. It didn’t seem real, sitting opposite this
silent and faceless man.

The feeling of unreality was strangely
familiar. It struck Catherine like a bolt of lightning that she’d
felt exactly this way at least once before. It was on the day of
their wedding.

Spring of 1861 had been a time of madness, of
excitement, of hurry, hurry, hurry. Men left their families to
fight a war some of them little understood. Their reasons for
going, though varied and complex, could be boiled down to one
simple truth: No man, or group of men, was going to tell the South
what it could or could not do, and no army was

going to invade the Southland without a
fight.

Catherine herself took little interest in
politics, but she gathered the issues had to do with the rights of
the individual states and the South’s economy, which would be
fatally threatened by the eradication of slavery as proposed by the
North.

Incensed slaveholders and radical
abolitionists had really been fighting the war for years through
newsprint and political speeches, and through harrowing acts of
violence. Quieter, more sensible voices were heard, still in
opposition to each other—some urging submission, others encouraging
secession—but the North was unyielding and the South

refused to be coerced.

Men who loved their country, men who loved
the Union, wept and left Washington forever to become principal
leaders in the new Confederate States of America.

The North’s not-very-subtle attitude of moral
superiority further alienated Southerners and maddened the owners
of slaves (especially in view of the North’s labor practices, where
even women and children were worked nearly to death and paid a
pittance in wages). When Virginia seceded, Catherine believed her
state had done the only honorable thing. It was a viewpoint shared
by practically everyone she knew, including Andrew Kelly.

She’d met Andrew at one of the dozens of
parties given that spring. And because he was young and handsome
and came from a good Alabama family, because he declared his love
for her after their second dance, because she had no parents and
lived with her uncle and his very young second wife, and, mostly,
because she feared she would never have another chance should the
war take all the eligible young men— she consented to marry
him.

Catherine’s gaze shifted from the window of
the rocking carriage to the tired, gray-bearded face of her uncle.
It wasn’t that she didn’t like living with Martin and Sallie. It
wasn’t that she’d fallen suddenly, desperately, in love. Somehow
she’d simply been caught up in the excitement of those early days
of the war, when emotions ran as hot as some tropical fever through
the blood of southern men and women alike.

Why, they’d whip the Yankees in a month.
They’d teach those despotic rabble-rousers to stick their long
Yankee noses into a situation that was no business of theirs. The
young men couldn’t wait to join the army, and the young women
couldn’t wait to marry them, to send them off with tearful pride
and eagerly await their victorious return—heroes one and all.

Catherine found herself at the altar with
dizzying celerity. Like most brides, she blushingly pledged her
troth, stifling the misgivings that had begun to gnaw at her former
determination. But, unlike most brides, she spent her wedding night
alone in her own bed, for she had come down with a sore throat and
raging fever. She was better by the next morning, but Andrew had to
join his unit and so had ridden away after kissing her on the cheek
and promising to write. (She had wondered, often, why she hadn’t
been more regretful.)

After three letters, she heard nothing more
for six months. It seemed she must assume the worst, but she held
on to the fact that no one had found his body, though so many
bodies remained unidentified, shoved into shallow mass graves. But
Andrew was an officer; surely if he’d been killed, someone would
know it!

In June of 1862, a few months after their
first anniversary, she heard he was wounded and had been
unconscious for a long time. He was only beginning to recover. She
received a long but curiously uninformative letter from a surgeon
who had tended Andrew in a hospital somewhere in Georgia. Her
husband would be sent home as soon as he was strong enough to
endure the trip.

Now it was November, and the man she’d
married had returned. Except that he wasn’t exactly the man she had
married.

The long and silent ride ended before a
handsome three-story house of red brick on Franklin Street, not far
from the government district. Martin Henderson alighted and turned
to help the other occupants. Catherine climbed out, then stood
uncertainly, wondering if she should help her husband, but Mrs.
Shirley seemed to have the situation well in hand.

Catherine followed the pair into the house
and turned to wait for her uncle, who was directing the driver as
to the disposition of Andrew’s and Mrs. Shirley’s baggage. Once
inside the house, she took off her bonnet and cloak and hung them
on the rack next to the door.

Andrew had paused in the wide central
hallway. Catherine noticed that Ephraim, who acted as butler,
valet, and on many occasions her counselor, stood just inside the
doorway of the parlor with a bewildered look on his kind, aged
face.