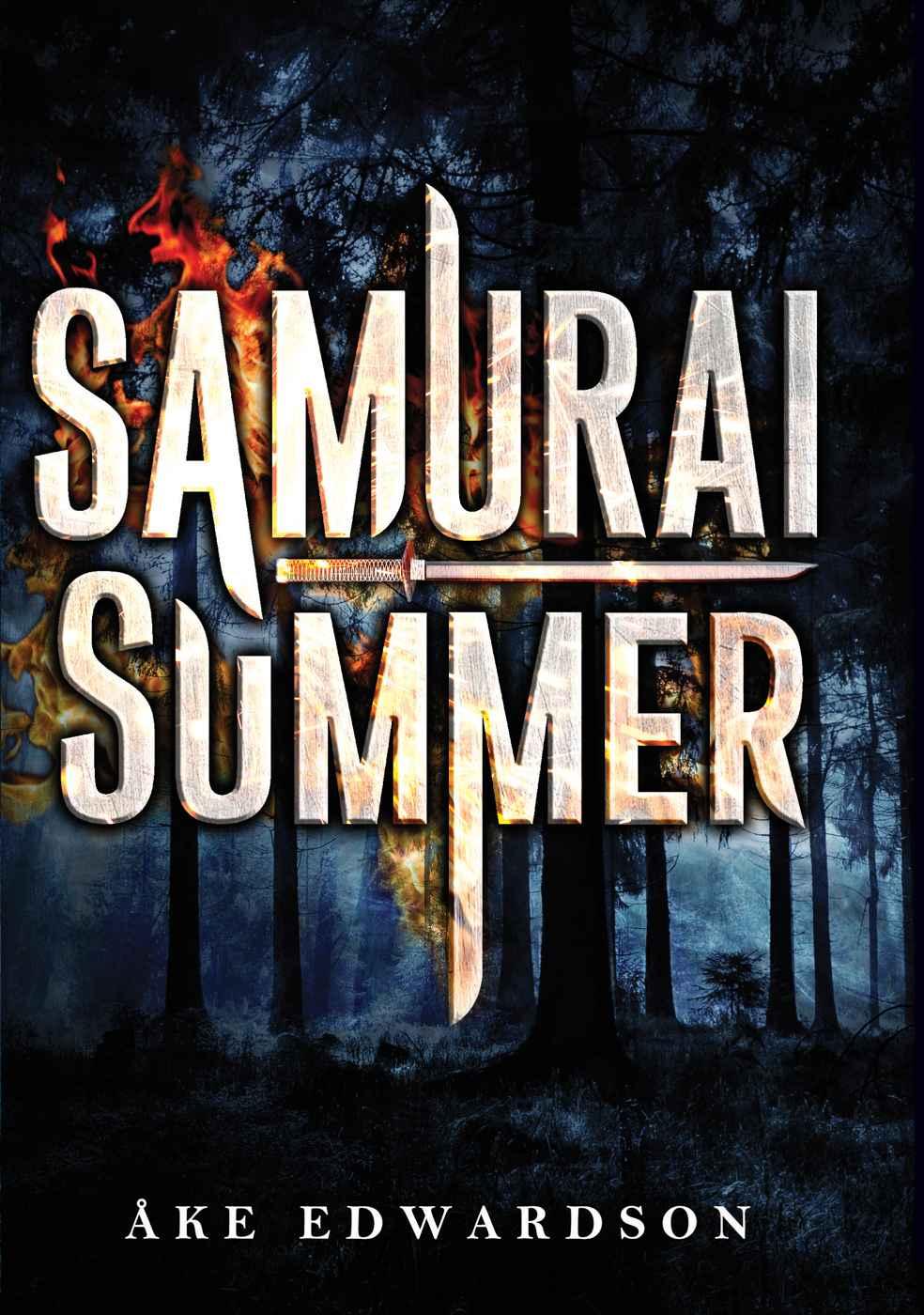 No part of this publication may be reproduced, stored in a retrieval system, or transmitted, in any form or by any means, electronic, mechanical, photocopying, recording, or otherwise, without the prior permission of the copyright owner. Request for permission should be addressed to:

I
wish this was a secret story. Sometimes I wish there wasn’t even a story to tell. Maybe it would have been better for everyone. But then I think the opposite. The best thing that could have happened did happen.

It’s late evening now. Darkness is setting in, and the whole camp lies still. There’s a ceiling lamp giving off a blue glow that doesn’t quite reach the ground. I’m sitting on the dirt floor. The light way up there in the sky is the moon.

I’ve been sitting here for a long time, and lying next to me is my long sword, my
katana
. It almost looks like a shadow on the floor in this light. My short sword, my
wakizashi
, is in my belt. I can feel its handle when I move, but I’m not going to move. I’m not going to do anything, not right now. I have a story to tell.

There’s still some light outside because it’s summer. The end of what has been my last summer. I hope to be able to explain that eventually if I can. But I’m not sure you can explain anything. Things happen, sometimes because they have to, sometimes even though they don’t have to. And the most terrible things are the ones that are the most difficult to explain.

There are almost no walls left around me where I’m sitting. I can hear sounds in the night. A bird screeches out over the lake. I’ve heard it before—I think it’s the same one. It seems to be as sleepless as I am. It’s the only bird that screeches as it flies around in the sky above the lake. Maybe it’s flying in its sleep. Maybe it screeches in its sleep and drives the other seabirds crazy. In the morning the grebes are so tired they almost drown when they dive beneath the surface for fish.

This story is about the lake and the forest.

I turned twelve last spring. Mama and Papa christened me Tommy, but my name is Kenny and nothing else. That’s the name I took when I baptized myself last summer. I stood in a stream and poured water onto the blade of my sword until the water turned to blood. Then I drew it across my forehead and became Kenny. The name comes from the Japanese word for sword:
ken
.

I’m a
samurai
. In Japan you’re born a
samurai
, and when you’re five years old you’re given your
samurai
garb and a sword. I wasn’t so lucky.

The sleepless bird lets out another screech in the darkness. It’s not as clear as before. I feel a little tired, but this is going to be a long night.

I
get so angry sometimes, all of a sudden, and then I might call someone I don’t even know a bloody bastard! I can tell you I’ve cursed a lot in my life. I don’t really know why. Mama doesn’t swear. She’s told me not to a million times but it doesn’t help.

I always used to get into fights at home in the front yard, just like that, without even thinking about it.

But I’ve stopped that now. A samurai is always calm. I may not be a full-fledged samurai yet—someone who’s always as calm as a rock—but it’s just a question of practice. If I swear sometimes, it’s because my soul hasn’t yet evolved into the perfect state:
satori
. That’s when the soul and the sword become one. The sword is no longer a weapon but something you need in order to feel at peace. But then you also have to become a master swordsman.

I tried to sneak off after breakfast every morning to practice not getting angry. It wasn’t easy. There were forty prisoners at the camp. It started in the morning when everyone had to go out to the toilets and then make their beds and put away their stuff. There were ten of us boys living in my dormitory. Across from us was another dormitory with ten boys, and below us were two girls’ dorms. Sometimes you could hear something from down there. Somebody crying, probably for their mother.

One night I heard a howl through the floor. I thought about it the next day, but I never found out what it was. You hardly ever heard any laughter from the girls’ dorms. You would have heard it if there had been any. Laughter carried through anything. But at this camp we weren’t meant to laugh. If anyone did laugh they were just faking it. It hurt your throat.

We washed ourselves in the lake twice a day. We could
do that before breakfast if we wanted to. That was the one thing the counselors didn’t care about. I guess they were just waking up then. They were always up late at night.

As for me, I always took my time washing myself because the samurai were careful about keeping themselves clean. But some were sloppy about washing themselves. Sausage, for example, from my dorm. But not even Sausage escaped when everyone had to get washed with hot water and soap in the bathtubs. It happened once in the middle of the summer in the evening before the mothers and fathers were supposed to come visit. I guess the idea was for everyone to smell good when it was visiting time. If they only knew what it smelled like otherwise.

The evening before visiting day, we received fresh sheets that also smelled good—almost like the forest out there during the day. The sheets were a little harder, too, and it was more difficult to make the beds with them the first morning. You had to make an effort if you wanted to win the bed-making contest.

Once I said to one of the counselors that I wanted to take a bath more than once a summer. She just looked at me. She didn’t get it. I think it was last summer or the summer before that. Sometimes all the summers flow together like different streams flowing into the spring when the water’s high.

I’ve been at the camp more summers than anyone. Only
Matron has been here more summers than me, but that’s not so strange considering she’s the overseer and was already here back when I was still in Mama’s belly.

Mama was here a few weeks ago on the big Visiting Day. As usual, she had walked from the turnoff by the main road where the bus stopped. She had trudged two miles through the woods, and as always, she smelled of sweat when she got here.

She had brought a bag of Twist chocolates with her that the counselors stole. Unless it was Matron herself who took it.

First I got to hold it, but then I had to hand it over to the counselors. That was how things were done here. The candy would then be distributed among all the kids, if you were lucky. When I didn’t get a piece of chocolate that night or the next, I realized they had taken the bag.

On visiting day, Mama carried the bag of Twist through the forest. Once she had caught her breath after her trek, she sat down on one of the chairs outside the woodshed. She wiped her face with this old handkerchief that was so sheer you could see right through it. It was like a window. I saw Mama’s face on the other side of it. I knew it was her, of course, but there was still something different about her. Like she wasn’t quite the same this time. Like the bag of Twist
meant something. She had never brought along anything that special before.

She stuffed the handkerchief into her handbag, which was round like a soccer ball.

I didn’t answer. Mama pushed her own hair back, which was brown and curly and sort of uneven across her forehead. Maybe she had cut it herself. She had looked exactly the same for as long as I could remember.

“Your hair has almost gone white from the sun,” she said.

She looked out across the lake, which was gleaming so brightly that it hurt your eyes. It was white from the sun, and it seemed like I had turned the same color. She looked at me again.

“It really is unusually hot this summer.”

I still said nothing.

“Tommy,” she said again, but this time it wasn’t a question anymore. She looked out at the lake again, as though Tommy were out there somewhere. But all she could see was a boat far in the distance—a canoe perhaps. It was just like a piece of black construction paper against all that white.

“How are things in town?” I asked. I had to change the
focus because it hurt my eyes to keep looking at the lake like I was looking for that Tommy kid too.

I wanted her to look at me again.

“Same as ever,” she said and turned her head, “only warmer.” She picked up her handkerchief and mopped her brow. “Somehow, it seems to get hotter in town than in the countryside in the summer.”

“You do like being out here, don’t you, Tommy?”

“Ke-Kenny.” I saw that she had to make an effort to say my real name. “You do like it out here, don’t you?”

“I don’t have anything to compare it to,” I said.

“You can go swimming and diving every day,” she said. She made it sound like I was a fish or something.

Warrior’s Redemption by Melissa Mayhue
Deceiver's Bond: Book Two of A Clairvoyant's Complicated Life by Katherine Bayless
Simone (The Ciprianos of Kellington Book 2) by Bergman, Jamallah
The I Hate to Cook Book by Peg Bracken
Confessions of a Call Center Gal: a novel by Lim, Lisa
Office Training Goes Home (The Boss's Pet, #2) by Tonya Kinzer
Unbound by Meredith Noone
The Dice Man by Luke Rhinehart
The Miracle by Irving Wallace
Billie Holiday by John Szwed