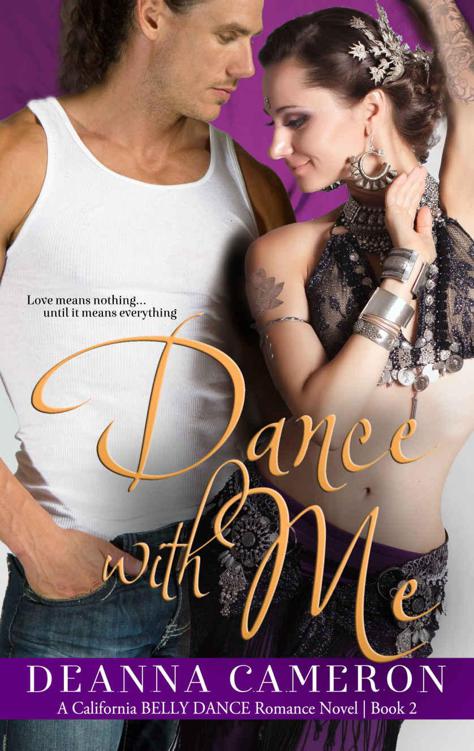 The man in a vintage tuxedo gazed down at the belly dancer with bedroom eyes and crooned as she pressed her shimmies against him. A warm flush came over Melanie, as though she were intruding on a private moment, not one played out for a movie camera more than sixty years ago.

Melanie spun away from the television at the sound of her friend’s voice and nearly knocked a box of hip scarves off the glass display case. She adjusted it back in place and composed herself.

“Sorry.” Abby snickered. “I didn’t mean to startle you.”

“You didn’t,” Melanie grumbled, returning to her task of folding the scarves into tidy squares and stacking them beside the cash register. “I thought you were in the dance room, helping Janaya with the class.”

“She wants to try teaching on her own.” Abby grabbed a bag of chandelier earrings that needed to be organized.

Melanie’s eyes widened. “It’s only her second week. Is she ready?”

Abby shrugged and continued hanging the dangling earrings on the revolving floor stand. “We won’t know till she tries. Honestly, I’m happy for the break. I feel guilty leaving you up here to work on the boutique by yourself. You should at least let me pay you.”

“No way. After all the free studio time you’ve given me, it’s the least I can do. Besides, the less time I have to spend at my mom’s place, the better.”

“So what’s that like, living with your mom again?”

“Hell.” Behind her the musical number on the screen came to an end, leaving a silence in the shop that made her uneasy. She turned and clicked off the television, happy to do anything but meet the questions she knew she’d find in her friend’s expression, if she dared to look.

“What happened between you and Chet anyway?”

There it was, the question she’d been avoiding all week.

“You know, the usual,” she mumbled and grabbed another wad of chiffon and jingly beads from the box. As she folded the chiffon with laser-sharp focus, her arms prickled from Abby’s glare. She peeked upward.

Abby was not only staring, but her lips were tucked in that stubborn expression that said she was not going to let the topic go.

“It didn’t work out,” Melanie said, feeling partly ashamed and partly irritated. “It wasn’t anyone’s fault. It was just over. Where should I put these?” She held out the stack of neatly folded scarves like an offering.

“That shelf,” Abby said, pointing to the far wall. “Next to the veils. Were you the one who broke it off?”

Melanie finished arranging the scarves and tossed the empty box across the room. She frowned at the pile of them mounting in the doorway. “I should probably take those out to the trash bin.”

Abby folded her arms over her chest, obscuring most of the hot-pink “Shimmy Shop” logo she had screened onto teeny-tiny black camisoles. Her personal version of a uniform. “Uh-uh, you’re not going to change the subject this time. Tell me what happened.”

Melanie sighed. She ran a perfectly shaped red fingernail along her bottom lip to fix a nonexistent lipstick smudge, patted the tube curl of her honey-brown bangs, and nudged the scarlet silk rose over her ear. Yeah, she was stalling. What was the point of hurrying when she knew whatever she said next would be followed by a lecture?

Abby still had that look.

“Here’s the thing,” Melanie said. “I’m happy to help you get the boutique ready, but can we cut the talk about ex-boyfriends? It’s kind of a buzzkill.”

Abby shook her head. “Oh, no. Not when he just became an ex-boyfriend a week ago. After two years together, you better believe you are not getting off that easy.”

“What?” Melanie cried. “Chet and I were together for a year. A year and a half, tops.”

“I was talking about you and me, bonehead. We’ve been friends for two years.” She waved her fingers at Melanie. “You wouldn’t let me get away with that crap. So spill.”

Melanie leaned back against the counter and stared out the plate-glass window that looked onto the parking lot. “It wasn’t a big deal. He just got too serious.”

“Serious? How serious? Did he propose?”

Melanie could hear the excitement in Abby’s voice. Why did females always get batshit crazy when you mentioned marriage?

“Holy crap. He proposed and you dumped him?”

Why did it sound so much worse when Abby said it? It didn’t matter. Once she got past this conversation, she never had to talk about it—or think about it—again. “I told him from the beginning I didn’t plan to get married. I don’t want kids, I don’t want any of it. I was honest.”

“I know, but c’mon,” Abby said. “I didn’t think I wanted those things either, but then I met the right guy, we started spending time together, and nature took its course.”

Melanie blinked hard, stopping the eye roll that ached to be rolled. “Maybe for you,” she said. “Don’t get me wrong. I’m happy for you. If Derek makes you happy and you want that ‘till death do you part’ thing, great. It’s just not for me. There are too many places I want to go, and too many things I want to do. Tying myself down to one person for the rest of my life just isn’t one of them.”

Abby cocked her head. “This is because of Belly Dance Divas, isn’t it? Was he trying to talk you out of auditioning?”

“It doesn’t matter.” Melanie wiped imaginary dust off the counter. “The important thing is now I’ll have more time to rehearse. After work, before work—if Deffner isn’t watching, maybe during work, too.”

“As if you need it,” Abby said. “I don’t know anyone who puts in more hours on the dance floor than you.”

Melanie forced a smile. “If only that were enough.”

“So does that mean the geisha girl tattoo is off?”

Actually, that was the hardest part of the breakup. Losing a boyfriend was one thing, but losing out on free ink from one of the best tattoo artists in Orange County was another. She rubbed at the mehndi-style lotus he’d given her on her last birthday. A tribal-inspired match for the rose and hibiscus flowers she’d gotten as a high school graduation present to herself.

He’d promised a geisha girl on her back to tie into the cherry blossoms on her thigh for her birthday, but that was still months away. Even if she offered to pay, that deal was more than likely off the table.

A blur of motion in the parking lot caught her eye. She watched a blazing yellow Porsche coupe screech to a halt.

Taz Roman pulled his Porsche 911 Carrera S into the dance studio’s parking lot and killed the engine. He sat, paralyzed. His sister’s words swarming around in his brain like angry bees.

“You need to settle down,” she pressed through the Bluetooth speaker. “You need to have some focus in your life and grow up. You’re not a kid anymore. By the time Dad was your age, he had a whole orchestra. He and Mom were at the height of their careers.”

“That you’re wasting your time with the Belly Dance Divas. You’re the best thing in that show. You’re a Roman. You should be the headliner.”

He touched his temples and stared into the glare of sunlight glancing off the car’s hood. He measured his words carefully. “You haven’t even seen the show.”

“I don’t have to. How could I, knowing you were so close to striking out on your own? But you had to go and let that snake Garrett weasel his way into the deal—”

“You don’t know what you’re talking about.” His heart thumped the way it always did when they argued. He tried to be calm. He tried to breathe. He tried not to care.

“Don’t I?” she needled. “I know what I see when I look at a Belly Dance Divas poster: I see his name splashed over everything, like he’s the reason the show’s so successful.”

Taz closed his eyes and took a deep breath. “My name is there, too.”

“It’s at the bottom. Underneath the dancers. I guess that shouldn’t surprise me. From what I hear, you’re beneath quite a few of those dancers these days. No wonder—”

“Enough,” he said, his knuckles burning white on the steering wheel. “Stop pretending you’re my mother. Just because she’s gone”—after all these years he still couldn’t bring himself to say
dead
—“doesn’t mean you get to fill the spot.”

There was a silence. Then a meek, “I’m sorry. I just worry about you. When I was there, I knew what was happening. You said you’d come to New York to visit, but you haven’t come since the wedding. It’s been two years. You can’t blame me for worrying about my little brother, especially when I hear what’s happening with the show and these girls.”