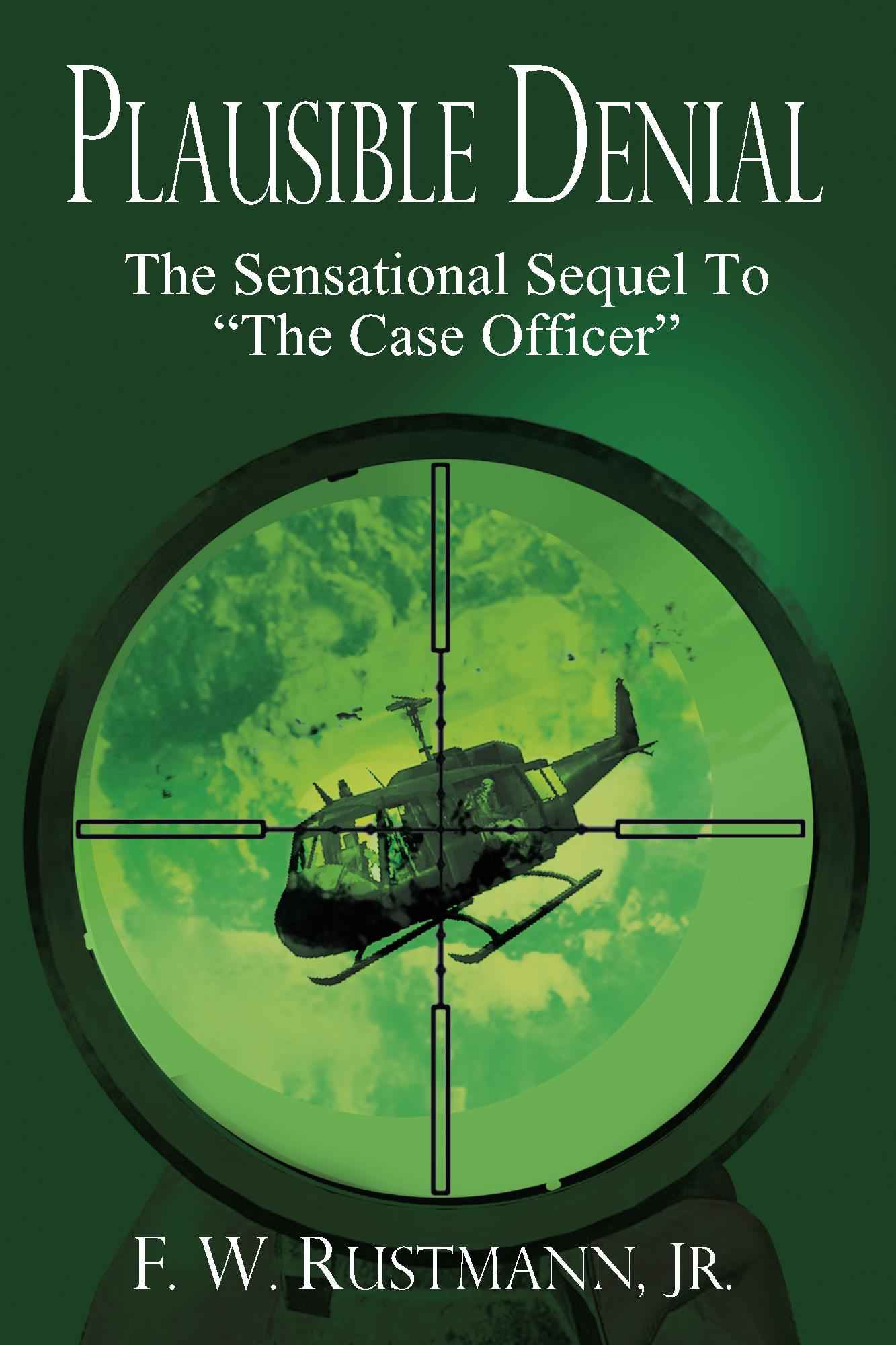 Aclaim
for the novels of

Plausible Denial
crackles with a degree of authenticity possible only from an experienced CIA
case officer who relies upon his knowledge of operations, not his imagination, to
craft a compellingly readable book. Over the last two decades, I have reviewed
carloads of intelligence books for The Washington Times. Fred Rustmann laps the
field.

Joe Goulden
is the author of The Dictionary of Espionage"
Spyspeak Into English
.

“Too many spy novels are written
by those with little real-world espionage knowledge or experience. Fred
Rustmann, a career CIA operations officer, steps out of the shadows in a book
steeped in tradecraft, espionage, betrayal, and the life-and-death risks an officer
or his agent face. Novel or thinly-veiled nonfiction? Like the profession
itself – you will be caught up in the action with little time to ponder the
question. Nor will you care. Authentic and fast-paced.”

“Chockfull of real tradecraft
tricks, written by a master spy, engrossing page turner inhabited by folks I
knew when I was in the clandestine world!”

“If you want to know how to make
a martini or woo a woman, read James Bond. If you want to know what it’s
sometimes like in the real world of espionage, read…Rustmann … he lived it.
From the first page you can tell this author is writing from experience. In
real life, CIA operatives get their hands ‘dirty.’ This is James Bond’s
tougher, gutsier younger brother.”

Author of
Nam-O-Rama
and
Goodbye
Mexico

“There are very,
very few novels that have been written by very senior officers of the CIA since
its founding over 50 years ago. There are very few, I suspect, as accurate in
fact and as compelling in fiction… If you want to read about how tradecraft in
intelligence is done and the price of service in an area more gray and
stressful than can be imagined, this book might be one worth your time.”

“How do CIA
field operatives find clandestine sources? Answer: with patience, hard work,
and above all - smarts. Street smarts and people smarts…You’ll accompany a
master operative step by step in his tradecraft-rich pursuit of a high value
target. But be prepared for surprises as Rustmann’s brisk narrative hurtles
along to its unexpected but all-too-realistic resolution.”

All rights reserved. No part of this publication may be
reproduced or transmitted in any form without permission in writing from the
publisher, except by a reviewer who wishes to quote brief passages in
connection with a review.

Published in the
United States by:

This is a work of
fiction. The events and characters portrayed are imaginary. Any resemblance to actual
persons or events is entirely coincidental.

The CIA’s
Publications Review Board has reviewed the manuscript for this book to assist
the author in eliminating classified information, and poses no security
objection to its publication. This review, however, should not be construed as
an official release of information, confirmation of its accuracy, or an
endorsement of the author’s views.

It is ten thousand times cheaper to pay
the best spies lavishly, than to pay even a tiny army poorly.

The Art of War

M
acMurphy
watched the speck on the horizon grow into a full-sized hydrofoil. The sleek
craft arched around the breakwater and throttled back, splashing down from its
pontoons onto its hull as it entered Macau harbor.

He
walked slowly toward the ferry terminal and watched the boat maneuver into its
docking position. He felt run down and tired, and couldn’t shake the
butterflies from his stomach – that horrible feeling of trepidation. He did not
like the feeling at all.

His
condition was worsened by the physical injuries he had received in the fight
with Lim. His left arm was held in a loose sling. Broken ribs scraped across
his lungs with each breath. The sunglasses he wore did not completely hide the
ugly bruise on the left side of his face. He wore tennis shoes, jeans, and a
short-sleeved denim shirt. He looked a mess and felt like shit.

He
was also quite certain that the news the courier was bringing from the DDO was
not going to make him feel any better.

He
saw him first as he passed through the double doors of the customs area and
entered the main terminal. He wore baggy blue jeans, a rumpled white shirt with
an open collar and an unbuttoned blue blazer. His graying hair was tosseled and
he walked with a familiar limp. He looked like he hadn’t slept in days. Mac’s
eyes widened and his heart quickened. He realized the news couldn’t be as bad
as he had expected—not if Edwin Rothmann was the courier delivering it.

The
DDO flashed a weary smile when their eyes met. He hefted the backpack slung
loosely over one shoulder and quickened his pace. When they met, the big man
enveloped Mac gingerly in a loose bearhug, frowning at his condition. “You look
terrible,” he growled.

“You
should see the other guy,” Mac replied sheepishly. “But you know all about that
by now. I guess you’re here to tell me what happened after I left, and what’s
going to happen next.”

They
entered the first cab in the queue and Mac directed the driver to take them to
the
Pousada de Macau
. They made small talk during the short drive to the
inn, not wanting the driver to overhear anything he shouldn’t.

When
Rothmann saw that the driver was concentrating on weaving his rattletrap
through the traffic around the gaudy Lisboa Hotel and surrounding casinos, he
decided it was safe to break the silence and assuage Mac’s greatest concern.
Mac was gazing thoughtfully out the window. The DDO leaned close and spoke to
him in a low, gravelly voice. “Lim’s alive; he made it—what’s left of him.”

The
taxi dropped them in front of the old
Pousada de Macau
. Mac paid the driver
and led the big man up the old wooden steps of the inn, through the small
entrance hall and directly out to the veranda overlooking the bay. The sun
hovered a few feet above the horizon, casting a crimson spell over the
sparkling blue-green waters.

They
chose a table a discreet distance from the other people. A stately old waiter
in starched whites arrived instantly. Rothmann ordered a scotch and Mac a
vodka-tonic. When the waiter returned with their drinks, Mac lifted his in a
toast. “
Kam-bei
, boss, thanks for coming.” The rim of his glass touched
the DDO’s slightly below its rim, honoring him in an ancient Chinese way, like
a deeper bow from a Japanese.

Mac
leaned forward and touched Rothmann’s arm. “Okay, let’s have it...all of
it...from the beginning. How about starting with why you came yourself.”

The
DDO looked up at him wearily. “I came because I like you, Mac. I wanted you to
hear this from someone close to you, someone who respects you, not from one of
the assholes who are taking over this fucking outfit.”

The
DDO sipped his scotch and gazed out over the water. The red sun was slipping
slowly into the cool and soothing sea. “Anyway, I decided the best thing was
for me to come personally. The fact that no one else could figure out where the
hell you had gone when you bugged out also helped a lot. You really had them
doing back flips.

“I
got the back channel cable you sent via Rodney and didn’t tell another soul
about it. I just called in sick and beat my way out here A-S-A-P to see you.

“And
let me tell you, we’re both damn lucky Lim didn’t check out, because if he had,
the Director would have had an excuse to crucify me and push me out. Not to
mention what he would have done to you.”

MacMurphy
adjusted his position, grunting as one of his cracked ribs stabbed him. “What
about Lim? When I left him, I thought he was dead. I thought I had killed him.”

“Well,
from what I hear, it wasn’t from lack of trying. When the police found him, he was
indeed at death’s door. But he survived. The Chinese have already returned him
to Beijing. Only problem is he suffered extensive brain damage from the loss of
blood and oxygen and the pounding you gave him. So not only will he be the
ugliest guy in his neighborhood—I guess you really did do a job on his face—he
will also be the village idiot.”

MacMurphy
grimaced. “You must think he got what he deserved.”

“You
better believe I think he got what he deserved. I’ve got no sympathy for that
murdering SOB whatsoever. I’m just glad you’re not facing a murder rap.”

“What
about the police?”

“It
was reported as an attempted robbery.” His large finger spun the ice in his
drink absentmindedly. “They think Lim caught someone trying to rip him off and
decided to take the law into his own hands. Only problem was he obviously bit
off more than he could chew.” He grinned.

“And
he’s in no shape to tell them any differently…even if he wanted to…and from
what I heard, he never will be. Actually, that’s the way it is with your entire
theft operation at the Chinese embassy. The French know nothing, the Chinese
won’t say anything, and the Agency will deny everything.

“So
the Chinese would prefer to let the whole matter drop. They don’t want the news
to get out that they smuggled 50 million Euros into France through the
diplomatic pouch -- especially if people were to find out the money was to be
used to fund illegal covert operations in Europe to support Iran’s terrorist
activities and efforts to replace the U.S. in Iraq.

“Furthermore,
they are thoroughly embarrassed by the defection of one of their senior MSS
officers and want that kept quiet too. For our part, we agreed to keep mum
about the defection—no publicity—and to give Huang a new identity so he can
live out his years in the U.S. in anonymity.

“And
you can be sure the Company won’t be jumping to advertise the fact that one of
theirs pulled a heist right under the noses of the French and then pulverized a
friendly third country diplomat.”

“So
Huang did defect,” said MacMurphy.