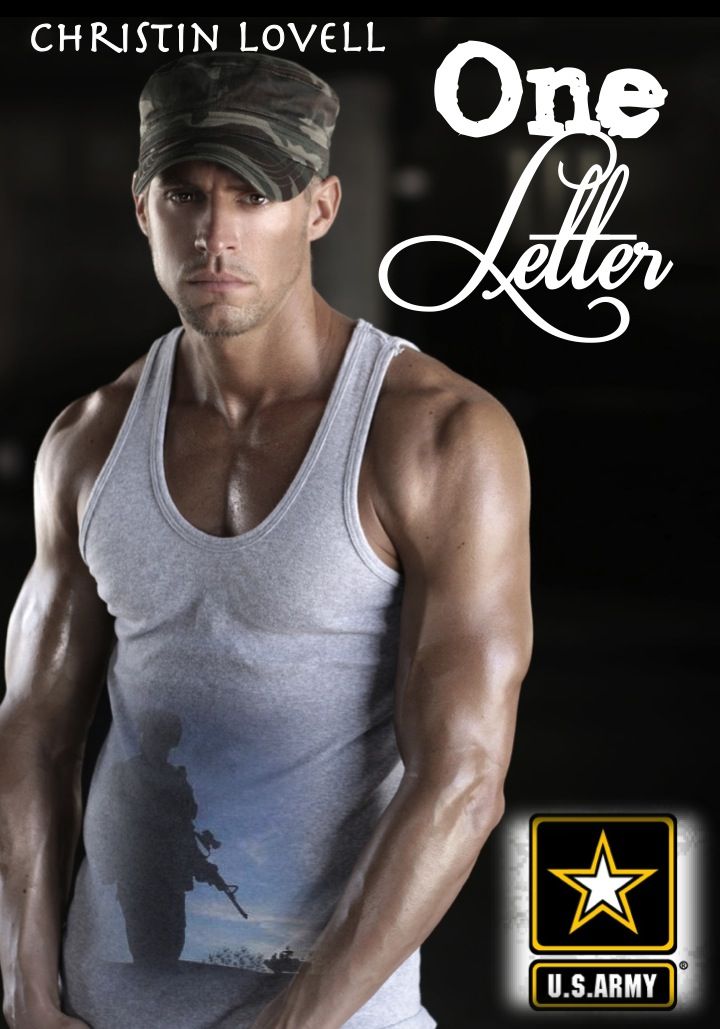 This book may not be reproduced, scanned, or distributed in any printed or electronic form without permission from the author. Please do not participate in or encourage piracy of copyrighted materials in violation of the author’s rights.

All characters and storylines are the property of the author and your support and respect is appreciated. The characters and events portrayed in this book are fictitious. Any similarity to real persons, living or dead, is coincidental and not intended by the author.

To all those who serve, and have served, thank you. Your efforts will never be forgotten.

1
Praise be to the
Lord
my Rock,
who trains my hands for war,
my fingers for battle.
2
He is my loving God and my fortress,
my stronghold and my deliverer,
my shield, in whom I take refuge,
who subdues peoples
under me.
- Psalm 144:1-2

It started with one letter.

Kellie Patrick sent one letter into the Middle East, to any soldier. Sergeant Daniel Rodriguez was the one who received it.

Three years and eighty-six letters later, Daniel is ready to meet the woman who got him through his last three tours of duty.

Three years and eighty-six letters later, plus size Kellie is nervous to meet the man who wrote his way into her heart.
Could a sexy as sin soldier really want forever with a curvy Southern gal like her though?

I never knew
that one letter could change a life, but it changed mine…

I’ve never written one of these before, but the volunteers assure me they make a difference. What do you say to an important stranger though, aside from the repetitive obvious? I would feel silly asking the standard set of questions.

How are you? – Probably not good considering you’re in a war zone.

How was your day? – Truth, probably not as good as mine, even though I got let go from my job today.

I think that’s what propelled me to finally write this letter. As bad a day as this has been, it’s not as bad as it could have been, and that’s because of someone like you, fighting to ensure I have the overabundance I do.

I’ve never been in your position, but I appreciate all you’ve sacrificed. I know it’s not easy, but you have a beautiful country waiting for you to ret
urn.

I’m not sure what part of this great country you’re from, but I’m enclosing a few photos of my home city
, of Savannah, Georgia.

Keep your head up and your ass covered, soldier.

Thanks for your letter and the photos. I’m from Detroit. Savannah looks like a beautiful place to live though.

I’m sorry that you lost your job, but it doesn’t sound like you’ve lost your hope, which is good.

Keep your head up.

I was pleasantly surprised to receive a reply from you.

I’m happy to report that I’ve found another job already, with higher pay – bonus! I start next week. I think my dog, Rocco, is a bit sad about it though. My constant company spoiled him.

Given that I’ve had so much time lately, I’ve been baking up a storm. Ironically we’ve had a week of rain to compliment my sessions. I read somewhere that soldiers often miss comfort food, and my favorite has always been an extra moist chocolate chip brownie. I really hope you don’t have any food allergies or - God forbid – diabetes. If you do, feel free to curse me for filth for sending you such a large batch of them.

The two things I’ve missed most in the desert is rain and a great woman’s cooking. With one bite, my entire platoon fell in love with you. The brownies were
delicioso
. Feel free to send more anytime.

I’m happy to hear you found another job. What are you doing now? I’m a little late on the reply, but I hope your first week went well and Rocco didn’t miss you too much.

I’m happy to hear you and your platoon enjoyed the brownies. Dutifully, I’m sending you a batch of peanut butter cookies and a batch of sugar cookies that I hope your team enjoys.

I’m a legal secretary. Nothing fancy, but I enjoy the work, even more now that my boss actually includes me on some case meetings. I’ve always loved law, but never had the gumption to go after a degree. And, while Rocco missed me, he stayed entertained…by chewing up my favorite pair of heels. I’m enclosing a picture of my guilty bulldog with said heels.

How is the desert this time of year? I hate the summer heat and humidity, and I live where it’s green and grassy. I can only imagine how unbearable it is there, especially with all that gear on.

The cookies were great. A few of the guys are hounding me for your address. Don’t worry
; I protected you. Officer Staley is an annoying ogre and Officer Johnson thinks he’s God’s gift to women. You’ll thank me for saving you later.

The weather is consistent here. It’s always hot with a chance of a sand storm on occasion. You get used to it though.

Rocco is a handsome beast. Sorry your shoes suffered. They were a sexy pair of heels.

I’m glad you’re enjoying your new job. I’ve always believed everything happens for a reason. Some laugh, but things always seem to work out.

Have a great week.

Thanks for protecting me. Based on your description, I definitely owe you one. Feel free to collect anytime. If you need anything, I’m more than happy to send it.

Work is still going great, but my best friend, Hannah, doesn’t think my boss has good intentions with me. Of course, to her, any married man glancing at another woman for longer than two seconds is guilty of infidelity in her eyes. There is nothing between us, but she’s not convinced. It’s made for some very interesting and somewhat awkward conversations with her lately.

Thankfully the heat is starting to back off here. I can walk outside without sweating in less than five minutes now. Rocco looks happier too. Of course, it could be because his tummy has finally recovered from the shoe-eating incident. Sadly I haven’t found another pair of red pumps to replace them though.

I haven’t had much free time lately, which is why I’m only sending a single batch of brownies this time. How many soldiers are in your platoon? In the future, I’ll make sure to send enough each time, with a few extra just for you.

Sadly, we recently lost two of our men, Hollings and Anderson. A bomb attached to the undercarriage of a vehicle got them. The guys are always a little down after we lose someone. That brought the number in our tight group to seventeen.

I haven’t met Hannah, but I like her already. Any man who truly loves a woman won’t even glance at another. The whole look-but-don’t-touch line is bullshit. I see no reason to look at all if I have a beautiful woman who loves me at home. Most of my men agree. (Johnson disagrees.) Most soldiers would kill for a woman who felt the same.

Ronny just got a letter from his mom telling him his wife
is divorcing him the second he gets back, and that she’s already taken up with another man. He’s a wreck. Can’t say I blame him. A soldier’s biggest worry, outside of staying alive, is losing his partner to someone else while he’s gone. It’s tough.

I don’t think I want to collect on that debt just yet, but if you’re feeling generous, we could always use the basics. Toiletries are hard to come by in this part of the world. And, if you’re the kind-hearted woman I think you are, you’ll send a batch of something to cheer up the guys. No pressure. I just know how much we enjoyed the last batch; a few nearly lost limbs over it.

You’re the kind of man I, and most of the women I know, dream of finding. If you have a girlfriend, fiancé or wife, please tell her she’s the luckiest woman alive to have found a man with your values and devotion.

I’m so sorry for your loss. I know to some degree you must be used to it, but I doubt it ever gets easier.

Tell Ronny Hannah and me personally volunteer to teach his wife a lesson. When you have a good man who loves you, it doesn’t matter how far away he is or how long he’s gone to war, you cherish him; you don’t give him up easily. You especially don’t do it without trying to work things out first.

I’ve never been one, but I’m sure being an army wife isn’t easy. Hannah gets lonely after not seeing Roger, her new boyfriend, for two days. Love isn’t easy, but commitment is. I’ve never seen the point of getting married if you’re not committed to love though.

On a better note, for me, it’s fall in Savannah. The weather is breezy and cool
enough for a sweater while the scenery is breathtaking. I’m enclosing some pictures I took in the dog park the other day in the care package so you can see for yourself.

I know I’ve to
ld you before, but I really meant it. Stay safe! That goes for you and your team. And yes, that’s an order.

Just got your package today. You brought all of us an early Christmas. The guys said to give you a big thanks, and a few are proposing marriage, especially now that Gregg has shampoo, body wash and deodorant. He was stinking up our barracks. We held his batch of cookies hostage until he used it. You’re an amazing woman, Kellie. Just the kind of woman a soldier could get serious with.

This is my fifth tour of duty, and every year I start to get homesick about this time. The holidays are coming up. We all miss home then, but we make do. Your package helped erase a bit of that today. It meant a lot.

Are you still liking your job? Is your boss behaving? Ronny said he may take Hannah and you up on that offer. We all go home in February. I’ll get a month with my parents before coming back. Your letters and packages will help me get through until then.

Three years and eighty-six letters later, I received the letter of all letters.

Near the end of the first year, I became as addicted to Daniel’s letters as he claimed to be to mine. We got through his Dad’s death and several re-assignments on his end, and Hannah’s many break-ups and two moves on my end. Slowly, we developed this co-dependency upon those letters.

Our greetings and salutations evolved with our relationship. We never declared it, but it was an unspoken known. I couldn’t even look at another man without thinking of Daniel.

That first February, while he was on leave, he called me for the first time. We talked for hours on end that month, and every time he returned home thereafter.
Daniel sent me a few photos of himself that I kept in frames around my apartment. As far as my heart was concerned, he owned it.

I had one stipulation, one giant fear that kept me from bravely giving him the key: myself.

Daniel asked several times for photos of me, but I never sent them. I knew the moment he saw me all of this would change. It would end. I would lose all I’d come to cherish.