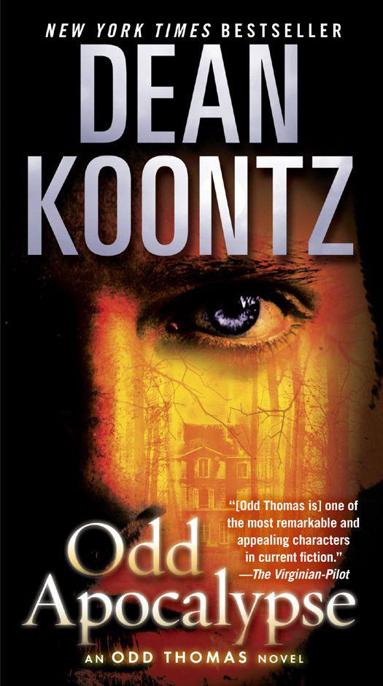 Odd Apocalypse
is a work of fiction. Names, characters, places, and incidents are the products of the author’s imagination or are used fictitiously. Any resemblance to actual events, locales, or persons, living or dead, is entirely coincidental.

Published in the United States by Bantam Books,
an imprint of The Random House Publishing Group,
a division of Random House, Inc., New York.

A signed, limited edition has been privately printed by Charnel House.
Charnelhouse.com

B
ANTAM
B
OOKS
and the rooster colophon are registered trademarks of Random House, Inc.

Title page art from an original photograph by Thomas Csizik

This book contains an excerpt from the forthcoming title
Deeply Odd
by Dean Koontz. This excerpt has been set for this edition only and may not reflect the final content of the forthcoming edition.

From childhood’s hour I have not been

As others were—I have not seen

Near sunset of my second full day as a guest in Roseland, crossing the immense lawn between the main house and the eucalyptus grove, I halted and pivoted, warned by instinct. Racing toward me, the great black stallion was as mighty a horse as I had ever seen. Earlier, in a book of breeds, I had identified it as a Friesian. The blonde who rode him wore a white nightgown.

As silent as any spirit, the woman urged the horse forward, faster. On hooves that made no sound, the steed ran
through
me with no effect.

I have certain talents. In addition to being a pretty good short-order cook, I have an occasional prophetic dream. And in the waking world, I sometimes see the spirits of the lingering dead who, for various reasons, are reluctant to move on to the Other Side.

This long-dead horse and rider, now only spirits in our world, knew that no one but I could see them. After appearing to me twice the previous day and once this morning, but at a distance, the woman seemed to have decided to get my attention in an aggressive fashion.

Mount and mistress raced around me in a wide arc. I turned to follow them, and they cantered toward me once more but then
halted. The stallion reared over me, silently slashing the air with the hooves of its forelegs, nostrils flared, eyes rolling, a creature of such immense power that I stumbled backward even though I knew that it was as immaterial as a dream.

Spirits are solid and warm to my touch, as real to me in that way as is anyone alive. But I am not solid to them, and they can neither ruffle my hair nor strike a death blow at me.

Because my sixth sense complicates my existence, I try otherwise to keep my life simple. I have fewer possessions than a monk. I have no time or peace to build a career as a fry cook or as anything else. I never plan for the future, but wander into it with a smile on my face, hope in my heart, and the hair up on the nape of my neck.

If spurning a gift weren’t ungrateful, I would at once return my supernatural sight. I would be content to spend my days whipping up omelets that make you groan with pleasure and pancakes so fluffy that the slightest breeze might float them off your plate.

Every talent is unearned, however, and with it comes a solemn obligation to use it as fully and as wisely as possible. If I didn’t believe in the miraculous nature of talent and in the sacred duty of the recipient, by now I would have gone so insane that I’d qualify for numerous high government positions.

As the stallion danced on its hind legs, the woman reached out with her right arm and pointed down at me, as if to say that she
knew I saw her and that she had a message to convey to me. Her lovely face was grim with determination, and those cornflower-blue eyes that were not bright with life were nonetheless bright with anguish.

When she dismounted, she didn’t drop to the ground but instead floated off the horse and almost seemed to glide across the grass to me. The blood faded from her hair and nightgown, and she manifested as she had looked in life before her fatal wounds, as if she might be concerned that the gore would repel me. I felt her touch when she put one hand to my face, as though she, a ghost, had more difficulty believing in me than I had believing in her.

Behind the woman, the sun melted into the distant sea, and several distinctively shaped clouds glowed like a fleet of ancient warships with their masts and sails ablaze.

As I saw her anguish relent to a tentative hope, I said, “Yes, I can see you. And if you’ll let me, I can help you cross over.”

She shook her head violently and took a step backward, as if she feared that with some touch or spoken spell I might release her from this world. But I have no such power.

I thought I understood the reason for her reaction. “You were murdered, and before you go from this world, you want to be sure that justice will be done.”

She nodded but then shook her head, as if to say,
Yes, but not only that
.

Being more familiar with the deceased than I might wish to be, I can tell you from considerable personal experience that the spirits of the lingering dead don’t talk. I don’t know why. Even when they have been brutally murdered and are desperate to see their assailants brought to justice, they are unable to convey essential information to me either by phone or face-to-face. Neither do they send text
messages. Maybe that’s because, given the opportunity, they would reveal something about death and the world beyond that we the living are not meant to know.

Anyway, the dead can be even more frustrating to deal with than are many of the living, which is astonishing when you consider that it’s the living who run the Department of Motor Vehicles.

Shadowless in the last direct light of the drowning sun, the Friesian stood with head high, as proud as any patriot before the sight of a beloved flag. But his only flag was the golden hair of his mistress. He grazed no more in this place but reserved his appetite for Elysian fields.

Approaching me again, the blonde stared at me so intensely that I could feel her desperation. She formed a cradle with her arms and rocked it back and forth.

She nodded but then shook her head.

Brow furrowed, biting her lower lip, the woman hesitated before holding out one hand, palm down, perhaps four and a half feet above the ground.

Practiced as I am at spirit charades, I figured that she must be indicating the current height of the baby whom she’d once borne, not an infant now but perhaps nine or ten years old. “Not your baby any longer. Your
child
.”

Ablaze in the western sky, those ancient warships built of clouds
were burning down from fiery orange to bloody red as the heavens slowly darkened toward purple.

When I asked if her child was a girl or a boy, she indicated the latter.

Although I knew of no children on this estate, I considered the anguish that carved her face, and I asked the most obvious question: “And your son is … what? In trouble here?”

Far to the east of the main house in Roseland, out of sight beyond a hurst of live oaks, was a riding ring bristling with weeds. A half-collapsed ranch fence encircled it.

The stables, however, looked as if they had been built last week. Curiously, all the stalls were spotless; not one piece of straw or a single cobweb could be found, no dust, as though the place was thoroughly scrubbed on a regular basis. Judging by that tidiness, and by a smell as crisp and pure as that of a winter day after a snowfall, no horses had been kept there in decades; evidently, the woman in white had been dead a long time.

How, then, could her child be only nine or ten?

Some spirits are exhausted or at least taxed by lengthy contact, and they fade away for hours or days before they renew their power to manifest. This woman seemed to have a strong will that would maintain her apparition. But suddenly, as the air shimmered and a strange sour-yellow light flooded across the land, she and the stallion—which perhaps had been killed in the same event that claimed the life of his mistress—were gone. They didn’t fade or wither from the edges toward the center, as some other displaced souls occasionally did, but vanished in the instant that the light changed.

Precisely when the red dusk became yellow, a wind sprang out of the west, lashing the eucalyptus grove far behind me, rustling
through the California live oaks to the south, and blustering my hair into my eyes.

The House in Grosvenor Square by Linore Rose Burkard
Letters to Brendan by Ashley Bloom
Another Chance by Beattie, Michelle
Perdition by PM Drummond
The Destiny of the Sword by Dave Duncan
Claiming Carter by W.S. Greer
Highland Shifter (MacCoinnich Time Travel) by Catherine Bybee
Acts of faith by Philip Caputo
Mojitos with Merry Men by Marianne Mancusi
The Horseman on the Roof by Jean Giono