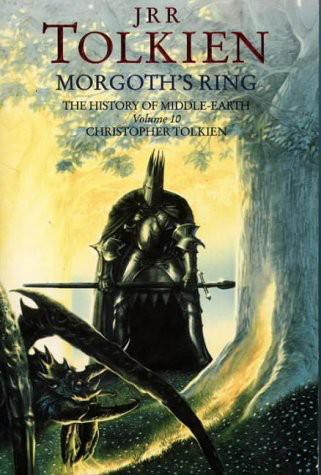 THE HISTORY OF MIDDLE-EARTH

Part One
The Legends of Aman

The Silmarillion
, foundation of the imagined world of J. R. R. Tolkien, was as is well known never completed, never brought to a final form after the writing of
The Lord of the Rings
: the work is known from the text published posthumously in 1977, a construction from the narratives that existed, not a completion.

In
Morgoth's Ring
, the first of two companion volumes, Christopher Tolkien describes and documents the later history of
The Silmarillion
, from the time when his father turned again to 'the Matter of the Elder Days' after
The Lord of the
Rings
was at last achieved. The text of the Annals of Aman, the 'Blessed Land' in the far West, is given in full; while in writings hitherto unknown is seen the nature of the problems that J. R. R. Tolkien explored in his later years, as new and radical ideas, portending upheaval in the old narratives, emerged at the heart of the mythology, and as the destinies of Men and Elves, mortals and immortals, became of central significance, together with a vastly enlarged perception of the evil of Melkor, the Shadow upon Arda. Among these writings a central place is given to the
Athrabeth Finrod ah Andreth
, in which the Elvish King of Nargothrond debates with the 'wise-woman' Andreth the injustice of human mortality.

The second part of this history of the later
Silmarillion
will be concerned with developments in the legends of Beleriand after the completion of
The Lord of
the Rings
, and will include the unpublished story
The Wanderings of Hurin
.

PART TWO
THE ANNALS OF AMAN

I. THE FIRST PHASE

2. Of Valinor and the Two Trees

3. Of the Coming of the Elves

4. Of Thingol and Melian

6. Of the Silmarils and the Darkening of Valinor

7. Of the Flight of the Noldor

8. Of the Sun and Moon and the Hiding of Valinor

The Earliest Version of the Story of Finwë and Míriel 205

Laws and Customs among the Eldar

Later versions of the Story of Finwë and Míriel

Of Fëanor and the Unchaining of Melkor

Of the Silmarils and the Unrest of the Noldor

Of the Darkening of Valinor

Of the Rape of the Silmarils

Of the Thieves' Quarrel

Appendix: Synopsis of the Texts

The
Quenta Silmarillion
, with the
Ainulindalë
, the
Annals of Valinor
, and the
Annals of Beleriand
, as they stood when my father began
The Lord of the Rings
at the end of 1937, were published six years ago in
The Lost Road and Other
Writings
. That was the first great break in the continuous development of
The
Silmarillion
from its origins in
The Book of Lost Tales
; but while one may indeed regret that matters fell out as they did just at that time, when the
Quenta Silmarillion
was in sight of the end, it was not in itself disastrous. Although, as will be seen in Part One of this book, a potentially destructive doubt had emerged before my father finished work on
The Lord of the Rings
, nonetheless in the years that immediately followed its completion he embarked on an ambitious remaking and enlargement of all the Matter of the Elder Days, without departure from the essentials of the original structure.

The creative power and confidence of that time is unmistakable. In July 1949, writing to the publishers on the subject of a sequel to
Farmer Ciles of Ham
, he said that when he had finally achieved
The Lord of the Rings
'the released spring may do something'; and in a letter to Stanley Unwin of February 1950, when, as he said, that goal had been reached at last, he wrote: 'For me the chief thing is that I feel that the whole matter is now "exorcized", and rides me no more. I can turn now to other things...' It is very significant also, I believe, that at that time he was deeply committed to the publication of
The Silmarillion
and
The Lord of the Rings
'in conjunction or in connexion' as a single work, 'one long Saga of the Jewels and the Rings'.

But little of all the work begun at that time was completed. The new
Lay of
Leithian
, the new tale of Tuor and the Fall of Gondolin, the
Grey Annals
(of Beleriand), the revision of the
Quenta Silmarillion
, were all abandoned. I have little doubt that despair of publication, at least in the form that he regarded as essential, was the prime cause. The negotiations with Collins to publish both works had collapsed. In June 1952 he wrote to Rayner Unwin: As for
The Lord of the Rings
and
The Silmarillion
, they are where they were. The one finished (and the end revised), and the other still unfinished (or unrevised), and both gathering dust.

I have been both off and on too unwell, and too burdened to do much about them, and too downhearted. Watching paper-shortages and costs mounting against me. But I have rather modified my views. Better something than nothing! Although to me all are one, and the 'Lord of the Rings' would be better far (and eased) as part of the whole, I would gladly consider the publication of any part of this stuff. Years are becoming precious...

Thus he bowed to necessity, but it was a grief to him.

This second break was destructive - in the sense, that
The Silmarillion
would never now be finally achieved. In the years that followed he was overwhelmed: the demands of his position in the University, and the necessity of moving house, led him to declare that the preparation of
The Lord of the Rings
for publication, which should have been 'a labour of delight', had been 'transformed into a nightmare'. Publication was followed by a huge correspondence of discussion, explanation, and analysis, of which the examples retrieved and published in the volume of his letters provide abundant evidence. It seems not to have been until the end of the 1950s that he turned again seriously to the
Silmarillion
narrative (for which there was now an insistent demand). But it was too late. As will be seen in the latter part of this book, much had changed since (and, as I incline to think, in direct relation to) the publication of
The Lord of the Rings
and its immediate aftermath.

Meditating long on the world that he had brought into being and was now in part unveiled, he had become absorbed in analytic speculation concerning its underlying postulates. Before he could prepare a new and final
Silmarillion
he must satisfy the requirements of a coherent theological and metaphysical system, rendered now more complex in its presentation by the supposition of obscure and conflicting elements in its roots and its tradition.

Among the chief 'structural' conceptions of the mythology that he pondered in those years were the myth of Light; the nature of Aman; the immortality (and death) of the Elves; the mode of their reincarnation; the Fall of Men and the length of their early history; the origin of the Orcs; and above all, the power and significance of Melkor-Morgoth, which was enlarged to become the ground and source of the corruption of Arda. For this reason I have chosen
Morgoth's Ring
as the title of this book. It derives from a passage in my father's essay 'Notes on motives in the
Silmarillion
' (pp. 394 ff.), in which he contrasted the nature of Sauron's power, concentrated in the One Ring, with that of Morgoth, enormously greater, but dispersed or disseminated into the very matter of Arda: 'the whole of Middle-earth was Morgoth's Ring'.

Thus this book and (as I hope) its successor attempt to document two radically distinct 'phases': that following the completion of
The Lord of the Rings
, and that following its publication. For a number of reasons, however, I have found it more satisfactory in presentation to divide the material, not according to these two

'phases', but by separating the narrative into two parts. While this division is artificial, I have been able to include in this book a high proportion of all that my father wrote in the years after
The Lord of the Rings
was finished, both in narrative and discussion (to which must be added of course all the material in the volume of letters), concerning the Elder Days before the Hiding of Valinor. The next volume will contain, according to my intention, all or at any rate most of the original texts relating to the legends of Beleriand and the War of the Jewels, including the full text of the
Grey Annals
and a major narrative remaining unpublished and unknown.
The
Wanderings of Húrin
.

The publication of the texts in this book makes it possible to relate, if not at all points or in every detail, the first eleven chapters (with the exception of Chapter II 'Of Aulë and Yavanna' and Chapter X 'Of the Sindar') of the published
Silmarillion
to their sources. This is not the purpose of the book, and I have not discussed the construction of the published text at large; I have presented the material in terms of its evolution from earlier forms, and in those parts that concern the revision and rewriting of the
Quenta Silmarillion
I have retained the paragraph numbers from the pre-
Lord of the Rings
text given in Volume V, so that comparison is made simple. But the (inevitably complex) documentation of the revised
Quenta
Silmarillion
is intended to show clearly its very curious relationship to the
Annals of
Aman
, which was a major consideration in the formation of the text in the first part of the published work.

I am much indebted to Mr Charles Noad, who has once again undertaken the onerous task of reading the text in proof independently and checking all references and citations with scrupulous care, to its great improvement.

I am very grateful for the following communications concerning Volume IX,
Sauron Defeated
. Mr John D. Rateliff has pointed out an entry in the diary of W. H. Lewis for 22 August 1946 (
Brothers and Friends: The Diaries of Major
Warren Hamilton Lewis
, ed. C. S. Kilby and M. L. Mead, 1982, p. 194). In this entry Warnie Lewis recorded that at the Inklings meeting that evening my father read 'a magnificent myth which is to knit up and conclude his Papers of the Notions

[
sic
] Club.' The myth is of course the Drowning of Anadune. I was present on this occasion but cannot recall it (in this connection see
Sauron Defeated
p. 389).

Mr William Hicklin has explained why John Rashbold, the undergraduate member of the Notion Club who never speaks, should bear the second name Jethro.

I was unable to explain the reference (pp. 277-8) to the retreat of the Danes from Porlock in Somerset to 'Broad Relic', but Miss Rhona Beare has pointed out that 'Broad Relic' and 'Steep Relic' are in fact names used in manuscripts of the Anglo-Saxon Chronicle for the islands of Flatholme and Steepholme at the mouth of the river Severn (see
The Lost Road and Other Writings
p. 80); according to Earle and Plummer,
Two of the Saxon Chronicles Parallel
(1892; II. 128), 'The name

"Relic" may point to some Irish religious settlements on these islands; "relicc" (=

reliquiae) is the regular Irish name for a cemetery. '

Absence by Peter Handke
Soft Focus by Jayne Ann Krentz
Hook 'Em Snotty by Gary Paulsen
The Portal in the Forest by Matt Dymerski
Quartz by Rabia Gale
Are You Sitting Down? by Yarbrough, Shannon
The Other Typist by Suzanne Rindell
Titanic Ashes by Paul Butler
Miss Julia Speaks Her Mind by Ann B. Ross
Rosemary: The Hidden Kennedy Daughter by Kate Clifford Larson