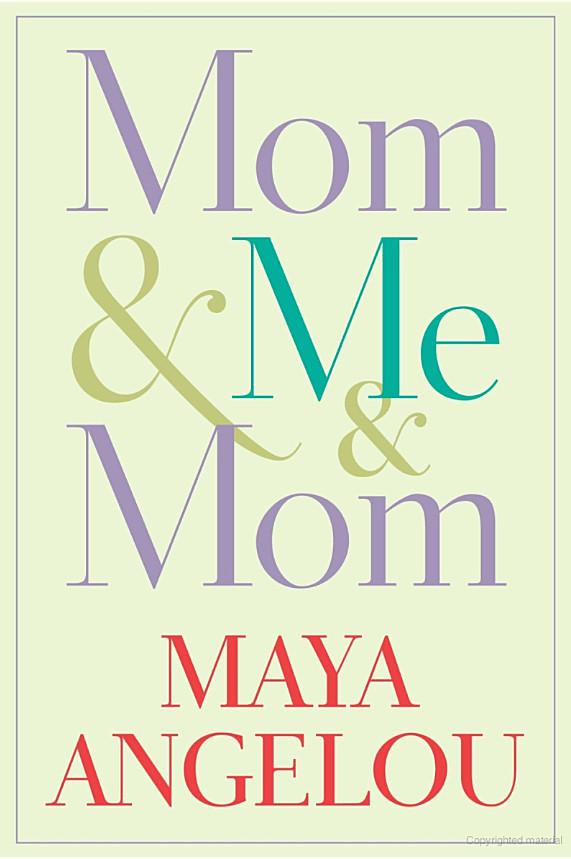 Frequently, I have been asked how I got to be this way. How did I, born black in a white country, poor in a society where wealth is adored and sought after at all costs, female in an environment where only large ships and some engines are described favorably by using the female pronoun—how did I get to be Maya Angelou?

Many times I have wanted to quote Topsy, the young black girl in
Uncle Tom’s Cabin
. I have been tempted to say, “I dunno. I just growed.” I never used that response, for a number of reasons. First, because I read the book in my early teens and the ignorant black girl embarrassed me. Second, I knew that I had become the woman I am because of the grandmother I loved and the mother I came to adore.

Their love informed, educated, and liberated me. I lived with my paternal grandmother from the time I was three years old until I was thirteen. My grandmother
never kissed me during those years. However, when she had company, she would summon me to stand in front of her visitors. Then she would stroke my arms asking, “Have you ever seen arms more beautiful, straight as a plank and brown as peanut butter?” Or she would give me a tablet and a pencil. She would call out numbers to me in front of her company.

When I told the answer, she would beam with pride. “See? My little professor.”

Love heals. Heals and liberates. I use the word
love
, not meaning sentimentality, but a condition so strong that it may be that which holds the stars in their heavenly positions and that which causes the blood to flow orderly in our veins.

This book has been written to examine some of the ways love heals and helps a person to climb impossible heights and rise from immeasurable depths.

“My mother was to remain a startling beauty.”

Her father, a Trinidadian with a heavy Caribbean accent, had jumped from a banana boat in Tampa, Florida, and evaded immigration agents successfully all his life. He spoke often and loudly with pride at being an American citizen. No one explained to him that simply wanting to be a citizen was not enough to make him one.

Contrasting with her father’s dark chocolate complexion, her mother was light-colored enough to pass for white. She was called an octoroon, meaning that she had one-eighth Negro blood. Her hair was
long and straight. At the kitchen table, she amused her children by whirling her braids like ropes and then later sitting on them.

Although Vivian’s mother’s people were Irish, she had been raised by German adoptive parents, and she spoke with a decided German accent.

Vivian was the firstborn of the Baxter children. Her sister Leah was next, followed by brothers Tootie, Cladwell, Tommy, and Billy.

As they grew, their father made violence a part of their inheritance. He said often, “If you get in jail for theft or burglary, I will let you rot. But if you are charged with fighting, I will sell your mother to get your bail.”

The family became known as the “Bad Baxters.” If someone angered any of them, they would track the offender to his street or to his saloon. The brothers (armed) would enter the bar. They would station themselves at the door, at the ends of the bar, and at the toilets. Uncle Cladwell would grab a wooden chair and break it, handing Vivian a piece of the chair.

He would say, “Vivian, go kick that bastard’s ass.”

Vivian would ask, “Which one?”

Then she would take the wooden weapon and use it to beat the offender.

When her brothers said, “That’s enough,” the Baxter gang would gather their violence and quit the
scene, leaving their mean reputation in the air. At home they told their fighting stories often and with great relish.

Grandmother Baxter played piano in the Baptist church and she liked to hear her children sing spiritual gospel songs. She would fill a cooler with Budweiser and stack bricks of ice cream in the refrigerator.

The same rough Baxter men led by their fierce older sister would harmonize in the kitchen on “Jesus Keep Me Near the Cross”:

There a precious fountain

Free to all, a healing stream
,

The Baxters were proud of their ability to sing. Uncle Tommy and Uncle Tootie had bass voices; Uncle Cladwell, Uncle Ira, and Uncle Billy were tenors; Vivian sang alto; and Aunt Leah sang a high soprano (the family said she also had a sweet tremolo). Many years later, I heard them often, when my father, Bailey Johnson Sr., took me and my brother, called Junior, to stay with the Baxters in St. Louis. They were proud to be loud and on key. Neighbors often dropped in and joined the songfest, each trying to sing loudest.

Vivian’s father always wanted to hear about the rough games his sons played. He would listen eagerly,
but if their games ended without a fight or at least a scuffle, he would blow air through his teeth and say, “That’s little boys’ play. Don’t waste my time with silly tales.”

Then he would tell Vivian, “Bibbi, these boys are too big to play little girls’ games. Don’t let them grow up to be women.”

Vivian took his instruction seriously. She promised her father she would make sure they were tough. She led her brothers to the local park and made them watch as she climbed the highest tree. She picked fights with the toughest boys in her neighborhood, never asking her brothers to help, counting on them to wade into the fight without being asked.

Her father chastised her when she called her sister a sissy.

He said, “She’s just a girl, but you are more than that. Bibbi, you are Papa’s little girl-boy. You won’t have to be so tough forever. When Cladwell gets up some size, he will take over.”

Everyone laughed, and recounted the escapades about when Vivian taught them how to be tough.

My mother, who was to remain a startling beauty, met my father, a handsome soldier, in 1924. Bailey Johnson had returned from World War I with officer’s honors and a fake French accent. They were unable to restrain themselves. They fell in love while Vivian’s brothers walked around him threateningly. He had been to war, and he was from the South, where a black man learned early that he had to stand up to threats, or else he wasn’t a man.

The Baxter boys could not intimidate Bailey Johnson, especially after Vivian told them to lay off, to straighten up, and fly right. Vivian’s parents were not happy that she was marrying a man from the South who was neither a doctor nor lawyer. He said he was a dietitian. The Baxters said that meant he was just a Negro cook.

Vivian and Bailey left the contentious Baxter atmosphere and moved to California, where little Bailey
was born. I came along two years later. My parents soon proved to each other that they couldn’t stay together. They were matches and gasoline. They even argued about how they were to break up. Neither wanted the responsibility of taking care of two toddlers. They separated and sent me and Bailey to my father’s mother in Arkansas.