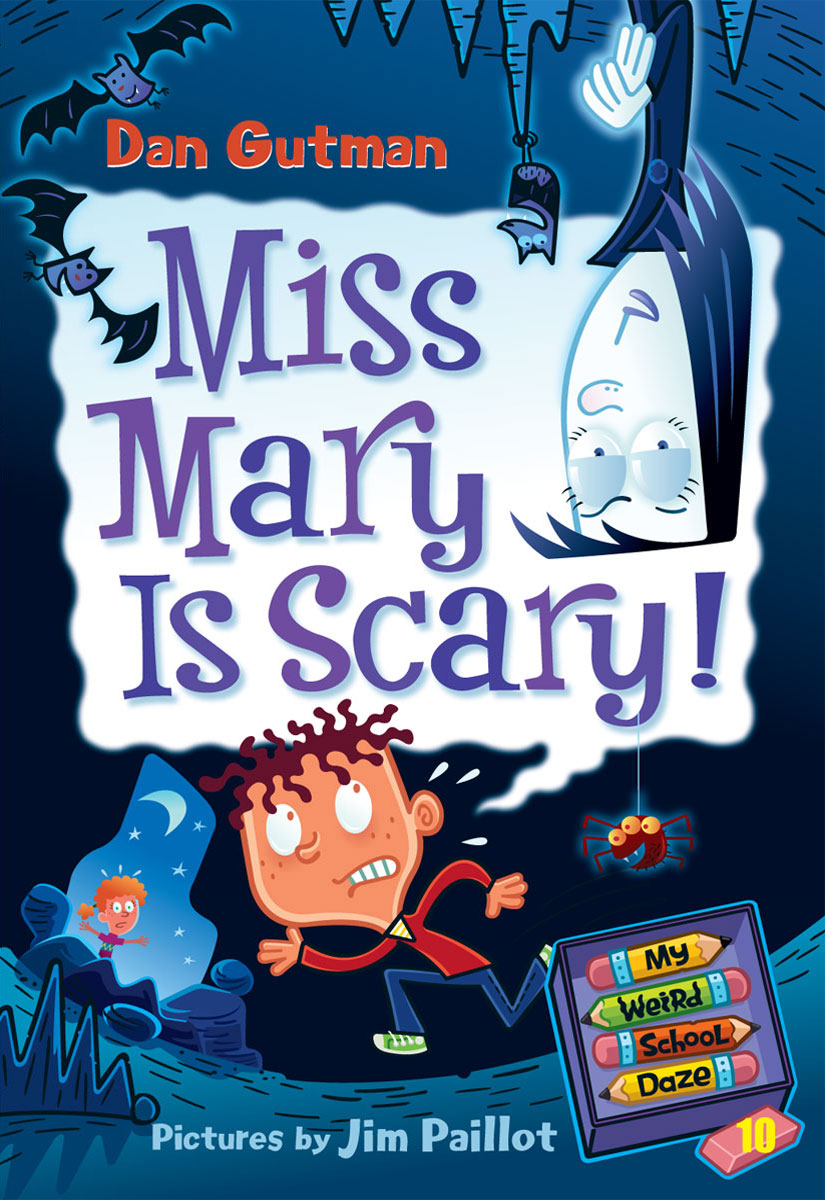 1
A Ghost in the Bathroom

About the Author and Illustrator 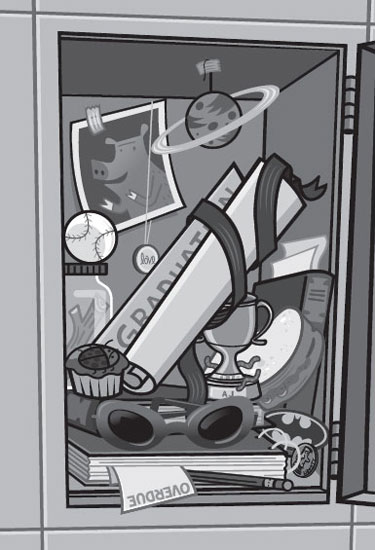 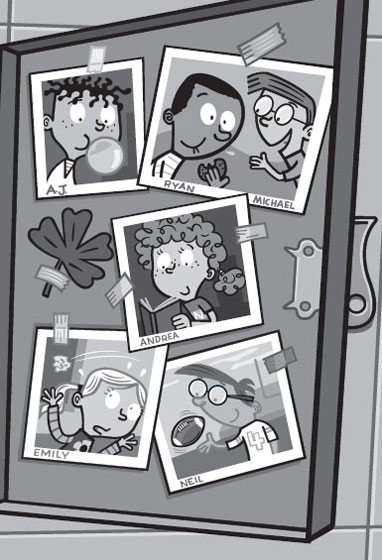 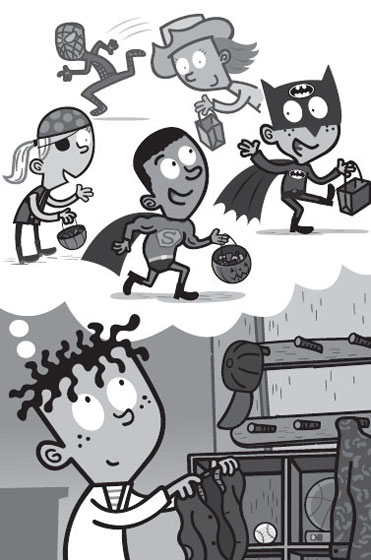 1
A Ghost in the Bathroom

My name is A.J. and I hate school.

It was a couple of weeks before Halloween, which is the coolest holiday of the year. We get to wear our costumes to school on Halloween and have a big candy party. At the end of the day we parade around the block with all the parents watching.
Marching in a parade is way better than watching a parade, because you don't have to stand in one place for a million hundred hours.

“Hang up your coats in the cloakroom,” said my teacher, Mr. Granite, who is from another planet.

What a weird name for a room: “cloakroom.” Who wears a
cloak
? I don't even know what a cloak is.

After we finished circle time and Word of the Day, Mr. Granite told us to take out our math books and turn to page twenty-three.

“Arlo doesn't need to go to the bathroom,” said Andrea Young, this annoying girl with curly brown hair. She calls me by my real name because she knows I don't like it.

“The boys' bathroom is haunted, y'know,” whispered my friend Ryan. “I heard there's a ghost in there.”

“Yeah, watch out for that ghost,” said my friend Michael. “He eats kids for lunch.”

That's ridiculous. There's no such thing as a ghost. And even if there were ghosts, they wouldn't go to the bathroom. They don't
have
to.

Even if ghosts
did
have to go to the bathroom, they wouldn't
haunt
one. Ghosts haunt graveyards, basements, and old houses of people who died. Not
bathrooms. Everybody knows that. I'm not afraid of ghosts.

Still, I was going to be careful, just to be on the safe side. I walked down the hall and pushed open the door to the bathroom.
*

“Anybody in here?” I asked.

I sat down in one of the stalls. There was nothing to do, but it was better than learning math.

That's when something really weird happened. The toilet in the stall next to me flushed. 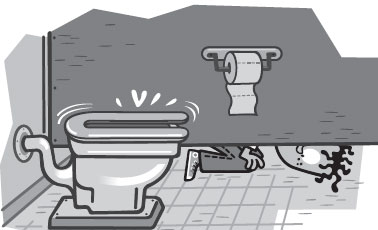 I peeked under the stall to see who was in there.

The ghost didn't answer. Maybe it was invisible.

I picked up the extra roll of toilet paper in case I had to hit the invisible ghost over
the head with it.

That's when something even
weirder
happened. The toilet on the
other
side of me flushed!

I peeked under the stall.

This was
really
weird! Maybe there were
two
invisible ghosts! And they had me surrounded! I was scared. I wanted to run away to Antarctica and go live with the penguins.

But that's when the weirdest thing in the history of the world happened. The toilet I was sitting on suddenly flushed!

“Help!” I screamed as I ran out the door. “There are ghosts in there!”

I ran back to class and shouted, “There are ghosts in the bathroom! Help!”

Everybody started freaking out, yelling, screaming, and crying.

That's when our custodian, Miss Lazar, came in.

“There are no ghosts in the bathroom,” Miss Lazar said. “I recently installed automatic sinks, hand dryers, and toilets to save water and electricity. I was just testing them out to see if they work.”

Well, maybe there aren't any ghosts in the bathroom after all. But I'm not going in there again for the rest of my life. 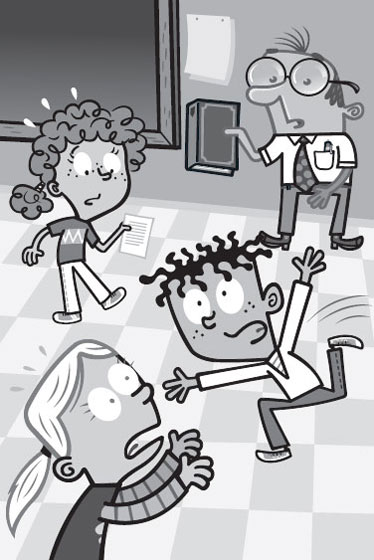 Mr. Granite told us that it was
his
idea to install the new water-saving toilets.

“â¦and that adds up to 175 gallons a week,” Mr. Granite continued. “And 9,100 gallons a year. And do you know how many gallons of water you will flush down the toilet in your lifetime?”

He didn't have the chance to answer the question, because at that moment the weirdest thing in the history of the world happened. The door opened.

Well, that's not the weird part because doors open all the time. But you'll never believe who walked into the door.

Nobody, because if you walked into a door it would hurt. But you'll never believe who walked into the
doorway
.

It was our principal, Mr. Klutz!

He has no hair at all. I think Mr. Klutz used to have hair, but it fell out a long time ago. That's what happens when men get old.

He held up his hand and made a peace sign, which means “shut up.”

“Mr. Klutz has a big nose,” I whispered to Ryan, who sits next to me.

“What is it?” asked Andrea's crybaby friend, Emily.

“You're going to get a student teacher!” Mr. Klutz announced. “Isn't that exciting?”

Wait a minute.
Student teacher?
That
doesn't make any sense.

“A student teacher is somebody who's learning how to
be
a teacher, dumbhead,” said Andrea.

Any time somebody says something mean to you and you can't think of what to say, just say, “So is your face.” That's the first rule of being a kid.

“What is our student teacher's name?” Andrea asked. “When will we meet her?” 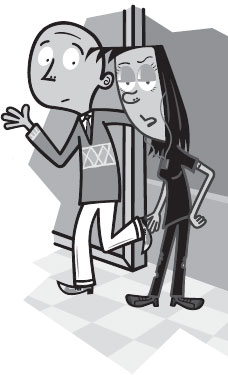 A lady came in. She looked weird. She had black hair, black clothes, black eye makeup, and a tattoo of a black bat on her arm. There was a purple streak in her hair. She had holes in her pants and earbuds in her ears.
She was chewing gum and bobbing her head up and down to the music.

“Miss Mary is going to be a great teacher,” Mr. Klutz told us. “Do you know how I know she'll be so good?”

“Because,” Mr. Klutz said as he put his arm around her, “Mary is my daughter.”

Reluctantly in Love by Niecey Roy
July Thunder by Rachel Lee
Iron Kingdom : The Rise and Downfall of Prussia, 1600-1947 by Christopher Clark
My Fair Mistress by Tracy Anne Warren
Lord Melchior by Varian Krylov
The Beltway Assassin by Richard Fox
Forsaken by Cyndi Friberg
The Girl With the Dragon Tattoo Trilogy Bundle by Stieg Larsson
The Big Whatever by Peter Doyle
Prayer for the Dead by Wiltse, David