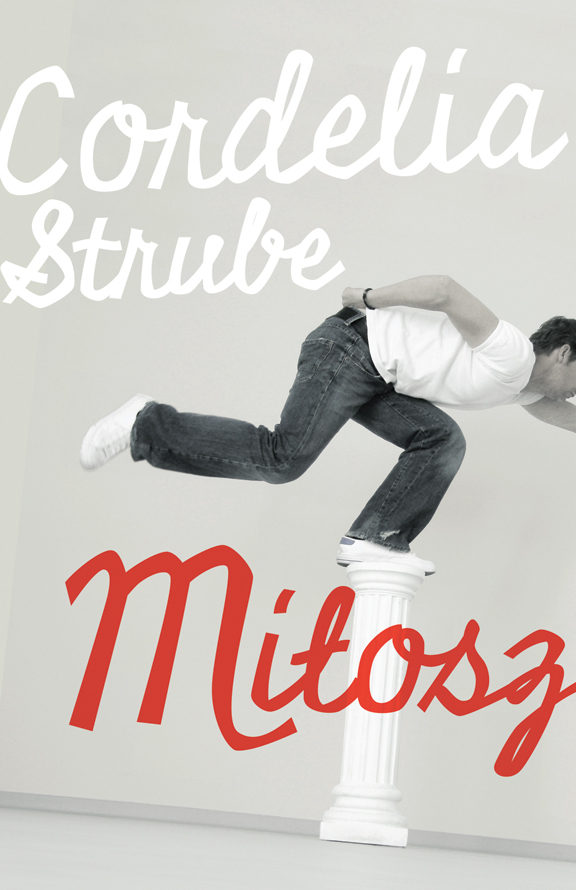 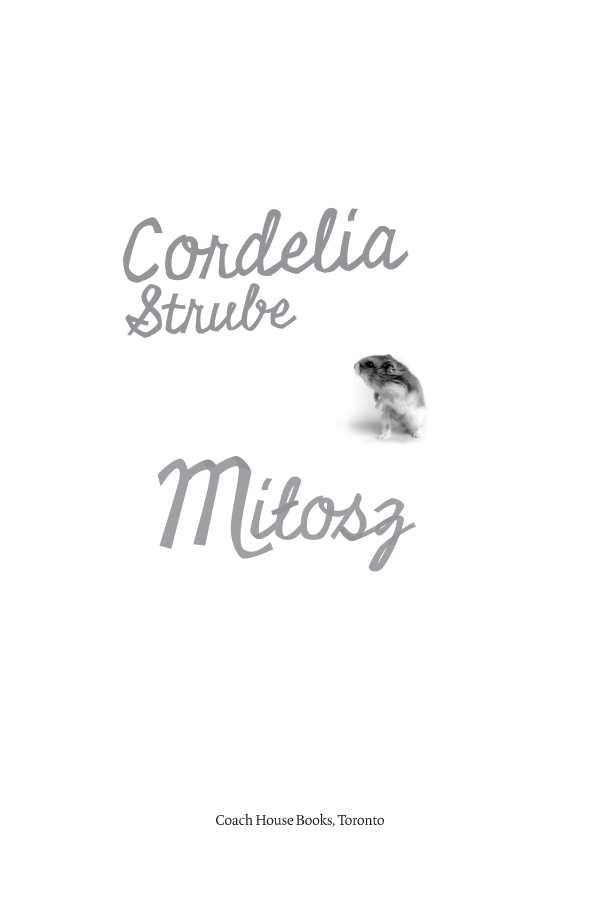 Purchase of the print version of this book entitles you to a free digital copy. To claim your ebook, please email
[email protected]
with proof of purchase or visit
chbooks.com/digital
. (Coach House Books reserves the right to terminate the free digital download offer at any time.)

âI hate you! I hate you! I hate you!' Strapped into his protective helmet, Robertson can go on like this for hours, spacing his words at regular intervals, using the same inflections. Tanis's response is inaudible through the wall but is probably, âYou don't hate me, possum. You've just had a bad day.' She will sit with her son for however long it takes, steadily offering soothing words. If she's lucky, he'll allow her to put her hand on his shoulder. When he lets her touch him, she says, it all feels manageable again. For five minutes. Her love for him can be painful to watch. Milo has walked them to school and seen the open wound of her need to protect her child. Half a block from the schoolyard Robertson insists she let him walk alone. Tanis obeys, smiling brightly and calling out, âHave a good day, possum!' Stooped, without looking back, Robertson shuffles into the mob, a lone target. Turning from the yard, Tanis's face ages, the forced cheer fading into haggard determination.

âDon't start that or I'll eat you for fucking breakfast!' Robertson shouts. He frequently says he'll eat people for fucking breakfast. What's different about tonight is that his father shouts back. âCan you for one second think about anyone but yourself? Look what you're doing to your mother. You're destroying your mother!'

Robertson's father doesn't normally shout. He cuts his grass and edges his flower beds. He wants to resurrect the fence dividing his lawn from Milo's weed patch but Tanis insists it would make her feel cramped. âI don't want to look out my window and stare at a fence.' She has confided to Milo that the real reason she opposes Christopher on the fence is that she wants Robertson to feel free to âhang' with Milo. She is the only person in living memory who considers him a good influence.

âI'll eat you for fucking breakfast!'

Milo can't listen anymore. He hurries downstairs, away from their torment.

âOne of these days somebody's going to get hurt,' Wallace says, practising his golf swing in the living room.

âMight be better for all parties. Two's company, three's a crowd.'

âHe needs both his parents.'

Wallace shakes the crumbs from a chip package into his mouth, crumples the bag and pitches it into the wastebasket. Nothing bothers Wallace. Nuclear war could be declared and Wallace would say, âMore junk removal.' His business is junk removal, is, in fact, called Friendly Junk Removal. There's no end of work, no end of junk, particularly with recession house foreclosures. Wallace tosses the remnants of the evictees' personal belongings, photo albums and birthday cards into the truck without a hint of a wistful sigh. Milo, chronically short of cash, assists Wallace when Pablo isn't available. As Wallace forces his way into what they hope will be unoccupied houses â some evictees resist evacuation despite repeated notices â Milo is frequently stalled in the kitchen, staring at a fridge festooned with lists and recipes, children's drawings, graduation and baby photos, vet bills. âGet a move on,' Wallace will command, âwe got two hours to clear this fucking shithole.'

Milo hasn't worked as an actor for over a year if you disregard his silent appearances in commercials â he's currently moderately popular as set dressing for fast food and big box chain campaigns. Last month he screwed in a light bulb in a Canadian Tire ad. His agent says Milo is experiencing a renaissance as
Everyman
. âSpreading gut, losing hair, it's all working for you,' his agent says. But Milo knows the reason he hasn't gotten a decent part for over a year is that he no longer knows how to act.

âHe's getting a tooth pulled.'

âNobody gets their teeth pulled anymore.'

âHe's fucking Mexican. You want the gig or not?'

In Milo's last stage role, as Konstantin in
The Seagull
, he began to think too much and was conscious of every movement he made onstage. It was an Equity Showcase production for which he wasn't paid but given the opportunity to showcase his magic. Milo would arrive at the theatre three hours before curtain in an effort to inhabit Konstantin, to work up a desire for Nina and the compulsion to blow his brains out. He'd skip rope for an hour to induce Konstantin's weariness, drink black coffee to attain his edginess, dredge personal experience to suffer his despair. As the curtain rose and his cue came closer, he waited to exit Milo's world and enter Konstantin's. This had always happened in the past: he would forget who he was and become who he was supposed to be. But that was before his father deserted him, leaving Milo steeped in shame although clueless as to what he had done to make his father bail on him. He preferred his father's wrath to the resounding rejection of abandonment. What little self-worth he had managed to nurture in adulthood left him, because a father only abandons a worthless son.

And so the futility that began onstage became pervasive. Now Milo acts badly 24/7.

âWhat do you mean “whose house”? Some fucking loser.'

âIs it a family house, a single occupant, a childless couple?'

Milo can't think of the difference. It's all lives lost to landfill.

The banging stops at two a.m. Milo lifts the pillow off his head but still can't sleep and considers going next door to ensure that no one has been hurt. They can seem so comfortable, the three of them, in the backyard flipping burgers, tossing the ball for the dog. Sometimes Milo sits in darkness, undetected, on his side of the yard, and looks in their windows. Tanis and Christopher often share a bottle of wine at the kitchen table, conversing easily. Milo envies their intimacy, their shared troubles, their abnormal son. When he moved back in after his father disappeared, he could hear them making love. It sounded as though they were trying to save each other from drowning. Not anymore. Now the only noise coming through the wall is the
TV
. Or screams.

He climbs their deck and peers through the sliding glass doors. An old lady hoarder occupied this house while Milo was growing up. Her porch was stacked with newspapers, broken toys, bikes, pots, lawn mowers, chairs. Milo's father referred to her as âthe fire hazard.' The old woman never made a sound on her side of the wall. When she died, Christopher and Tanis bought and gutted the place, filling it with colour and their angel-faced son, who seemed normal, although Milo's father declared him âbackward.' Milo didn't argue because no matter what his rebuttal, his father would argue it. Gustaw had argued himself out of a business and out of a wife. He argued with Christopher about the fence, and with Tanis about her âshit machine of a mutt.' Towards the end, none of the neighbours would venture into a conversation with Gustaw for fear of becoming embroiled. Milo was able to endure his father only for short visits. The long-suffering, despised adult son caring for his elderly father was a role he could play. With the rebelliousness of youth gone, Milo took pride in his ability to withstand the blows, to resist being drawn into battles he could not win. âI don't know how you put up with your father,' neighbours confided, and Milo smiled benignly, so secure was he in his role as the misunderstood, underappreciated son.

Of course he still yearned for the old man's approval. On the opening night of
The Seagull
, Milo peered through the slit in the curtains, scanning the audience for Gustaw. His father would see, finally, the scope of Milo's talent. He imagined him jolting at the sound of the gunshot, and possibly a tear rolling down his cheek. After the final curtain Milo waited for the tentative knock on the dressing room door, the awkward embrace, the bewilderment, âSon, I didn't know you had it in you. You have a gift.' But Gustaw never made the performance or, if he did, never admitted it, and decamped soon after, leaving Milo without the force of his father's loathing to resist. Thrown off balance, he has been stumbling ever since.

Only the light above the Wedderspoons' kitchen sink is on. The table has not been cleared; spaghetti hardens on the plates. This is highly unusual. Tanis always clears the table and does the dishes. Formerly a director of human resources, she became a full-time homemaker to look after Robertson and drive him to appointments with doctors, psychologists and behavioural therapists.

It's not surprising that the sliding doors are unlocked. Tanis and ChrisÂ­topher are Block Parents and rarely lock their doors. Milo finds her in the living room on the rocking chair, watching a muted samurai movie.

âAre you all right?' he asks.

âMaybe I should've come over sooner.'

âHe's asleep on the floor. Can you help me lift him?'

âOf course.' He follows her up the stairs, wondering why she hasn't asked Christopher to lift their son.

Robertson lies prone, his head inches from the wall. Tanis carefully removes the helmet. Freed of consciousness, Robertson could be any pink-cheeked boy on the threshold of life. Tanis steps back, allowing Milo room to manoeuvre. He slides his arms under Robertson's knees and back. Tanis cradles the boy's head as Milo transfers him to the bed. They lay him down gently, pulling the comforter around him. Tanis kisses his forehead, holding her lips against his skin. She has told Milo that the only time she can be sure Robertson won't recoil from her is when he is unconscious.

Back downstairs she resumes rocking and staring at the muted samurai movie. Voiceless warriors swing blades at intruding ninjas. Milo tries to think of encouraging words but knows they have tried everything: drugs, psychotherapy, dietary changes, chelation therapy, supplements, herbs, homeopathics. They have spent their life savings on their son.

âNext year he'll have a different teacher for every subject. I won't be able to kiss all their asses.'

A samurai thrusts his sword into a ninja's neck, causing blood to spurt from the ninja's mouth. Tanis's relentlessly curly hair, usually restrained with clips, tumbles over her face, hiding her expression.

This information catapults Milo. This couple that he has admired, that talk to each other, that work things out and love their son, cannot separate.