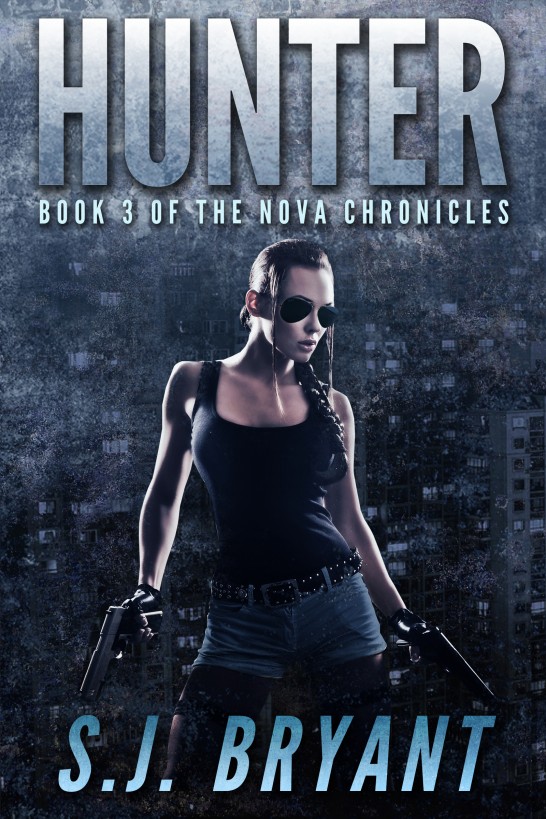 Published by Saffron
Bryant at Smashwords

This ebook is licensed for
your personal enjoyment only. This ebook may not be re-sold or
given away to other people. If you would like to share this book
with another person, please purchase an additional copy for each
recipient. If you're reading this book and did not purchase it, or
it was not purchased for your enjoyment only, then please return to
Smashwords.com or your favorite retailer and purchase your own
copy. Thank you for respecting the hard work of this
author. 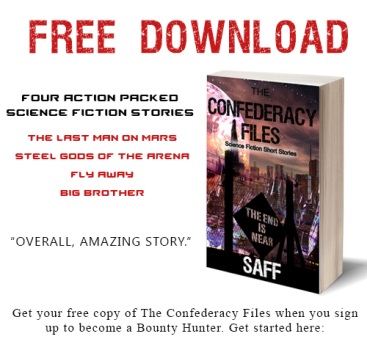 Corvus leapt from the ledge, his black cloak
whipping out behind him, and slammed into the woman walking below.
He stifled her screams with one hand and wrapped the other firmly
around her waist. He breathed deeply through his nose, enjoying the
smell of her, tasting her scent on the air.

She struggled
against his arms, writhing, her blonde hair lashing from side to
side, but he was too strong. She tried to cry for help but he
tightened his grip, crushing her lips against her teeth.

He relished
in the feel of her body thrashing against his.

The city
streets were quiet in the early hours. There were no witnesses to
see their struggle, with a single streetlamp casting a yellow glow
over the scene. Their back and forth struggle was like a staged
tango; loose gravel crunching under their feet and cool wind
whistling through the cold dark street.

In the
distance the inner city lights sparkled up the sides of
skyscrapers. Somewhere a siren sounded. Corvus paid it no
attention; he was invincible. He was high on his previous kills and
full of energy. The rest of his coven wouldn't be far behind and in
the meantime he could enjoy this tasty morsel.

Oh how good
she smelled!

He opened his
mouth to reveal pointed teeth. Every fibre of his being was
completely and utterly focused on her. His ears strained to hear
her gasping breath, his nose and mouth sensed nothing but the
flavour of her. He closed his eyes to fully enjoy the
meal.

"Stop right
there. Keep your hands up, leach." The voice was hard,
commanding.

Bright lights
burst into life around Corvus. They burned his pale skin and
illuminated the macabre scene. He screamed with pain as the lights
scorched the backs of his eyes, and fell to his knees, releasing
his victim.

The woman ran
stumbling from him. She sprinted to the police where she was
engulfed in a warm blanket and a wall of people.

Corvus
snarled and struggled to his feet. He pushed himself up and whirled
in circles. There were at least thirty guns aimed at him, filled
with wooden bullets no doubt. He searched the darkness for any sign
of the rest of his coven, but they were nowhere to be
seen.

"Corvus
Vadova you are under arrest for multiple counts of murder. Under
the Alien Relations Act you will be sentenced to fifty year's
imprisonment here on Boullion Five."

"Who dares
speak to me like that?" Corvus snarled. Using their primitive
language left a foul taste in his mouth.

"I am
Inspector Briggles. Put your hands up and surrender or you will be
killed." The voice was firm, commanding and, worst of all,
unafraid.

Corvus glared
around. He was surrounded and the lights stung his eyes. He had to
narrow them against the glare, yet even then it burned. He sent out
his senses and sniffed the air but he couldn't sense his coven. His
insides clenched; they should have been here. The fact that they
were nowhere in sight reeked of betrayal.

There was
only one way he would get out of this alive. Sneering, he lifted
his hands into the air and locked eyes with the
inspector.

"They're
here! They're coming!"

The security
guard's voice echoed down the empty hall, but there was no
response.

A bead of
sweat dripped down the man's forehead as he stared into the
darkness for any sign of movement. His heavy breaths made his
name-tag bounce on his chest, the name Felix flicking in and out of
the shadows.

Felix's gun
was levelled into the darkness at the end of the corridor. The
screams that had echoed about the stone passages just moments
before had stopped. He was alone in the silent darkness. He tried
his communicator chip again, but the signal was dead. No one was
coming to save him.

"Come out,
come out, wherever you are…" A smooth female voice weaved its way
to Felix.

"You're under
arrest. You will lay down your weapons this instant," Felix
stuttered.

Shapes
appeared out of the darkness and darted straight for him. He pulled
the trigger and wooden bullets sprayed out. Just one of the
approaching figures collapsed, before they were on him.

It was the
only thing he could get out before the creatures surrounded him,
opening their mouths. In the place of tongues, thick black leaches
extended out. The leaches were as long as Felix's forearm, folding
out from each of the gaping mouths.

The leaches
opened mouths of their own as they reached Felix's exposed flesh.
Tiny teeth punctured his arms, legs, and neck, and he began to
bleed. The leaches ripped into him with fiery bloodlust. Their jaws
bit and slashed through to his vital arteries. Blood sprayed in an
arc from his neck, soaking his attackers.

The last
thing he saw was a leach lunging for his face.

"A little
fatty," Laticia said, wiping a stray drop of blood from her crimson
lips.

"Maybe that
explains the extra weight you've put on." Laticia said, arching an
eyebrow. Her big eyes were heavily shadowed with mascara and stood
out against her pale skin.

Trevalon
frowned at Laticia and glanced down at his stomach. He withdrew his
tongue and sat back on his haunches.

"You haven't
changed at all." The silky voice drifted to them from down the
corridor. "A voice like that could only be my sweet
Laticia."

Laticia
pushed past her companions and strode down the passage. Her hips
swayed in time with her footsteps and a smile crept over her
face.

"Corvus. It's
been too long," she purred.

"Indeed. I
hope your plan included a way to get me out," Corvus
said.

She clasped
the heart-shaped locked around her neck, silently grateful that
she'd get a chance to explain the past five years in person, rather
than relying on the recorded message the locked
contained.

She stood
outside a massive metal box but she knew that inside it was wood.
She pulled out the key she'd taken from Felix's body and slipped it
into the metal door. It was an old fashioned locking system; modern
ones were too easy to access remotely. The key clicked into place
and the door swung open on rusty hinges.

Beyond the
metal door was an immense wooden one. It looked to have been cut
from a single tree, judging by the lines and woodwork tracing
across its surface.

Laticia
nodded her head towards the door and two of her companions stepped
forward brandishing large axes. They cut at the wooden box, careful
to avoid any flying splinters.

They made
quick work of the cell and soon a hole opened to the room
beyond.

The coven
stepped away from the space, their eyes wide with anticipation.
They each drew in a breath of awe as their leader stepped out of
the shadows. He was just as Laticia remembered. Corvus's hair was
jet black, darker even than the shadows all around him. His eyes
were rimmed with red and glinted in the darkness. Even after being
imprisoned for years he managed to look elegant. Wearing a long,
black trench-coat, he adjusted the sleeves as he stepped
forward.

He smiled at
his coven, revealing his own pointed teeth.

Laticia's
stomach clenched tight. He looked so calm, so composed, but she
knew there had to be a storm brewing under the surface. Sure
enough, it erupted far too quickly.

All composure
was gone, as his body slammed into Laticia and they both crashed
against the far wall.

Her back
slammed into the cold stone and pain tore through her spine. His
fingers clasped tight around her throat. His eyes were wide,
furious. Spittle dripped from the corner of his mouth as he glared
at her.

"Where were
you! Why have I been stuck in this hell-hole for years! You call
yourself my female!"

"Corvus,
there's more to it than you know. I'll explain but we have to get
out of here."

Laticia tried
to keep her voice steady, to keep the panic and guilt from gushing
out with every word she said. Her eyes flickered to the rest of the
coven. They were staring at her and Corvus with a mixture of horror
and disbelief.

She had to
get control of Corvus. Such a loss of composure would only be seen
as weakness and then they'd have another uprising on their hands.
She had to keep him focused; she could explain it all
later.

"I never
would," she whispered.

"I could have
died."

"I would have
died with you."

"More guards
will arrive soon. We have to get out of here."

"This isn't
over," Corvus said, his gaze deadly. He turned away from Laticia
and glared at the rest of the coven. "This isn't over for any of
you."

"Are you really planning on entering that thing
again?" Cal asked.

Nova was
underneath the hood of her racing craft, her fingers covered in
oil.

"I'd be
stupid not to. The prize money is five hundred credits."

"Yes, but
it's also illegal," Cal pointed out. The Class Four Labourbot
hovered above Nova's legs, his round panels reflecting the dim
light of Crusader's engine room.

When the Night by Cristina Comencini
A Most Naked Solution by Randol, Anna
Operation Mincemeat: How a Dead Man and a Bizarre Plan Fooled the Nazis and Assured an Allied Victory by Ben Macintyre
Dark Revelations by Swierczynski, Duane, Zuiker, Anthony E.
Dangerous Mercy: A Novel by Kathy Herman
Dire Blood (#5) (The Descent Series) by Reine, SM
F In Exams by Richard Benson
Generational Sins by Blair, Samantha
Ember by James K. Decker
Wine of the Gods 08: Dark Lady by Pam Uphoff