Read Master of the Dark Side: A Novella Online

Master of the Dark Side: A Novella 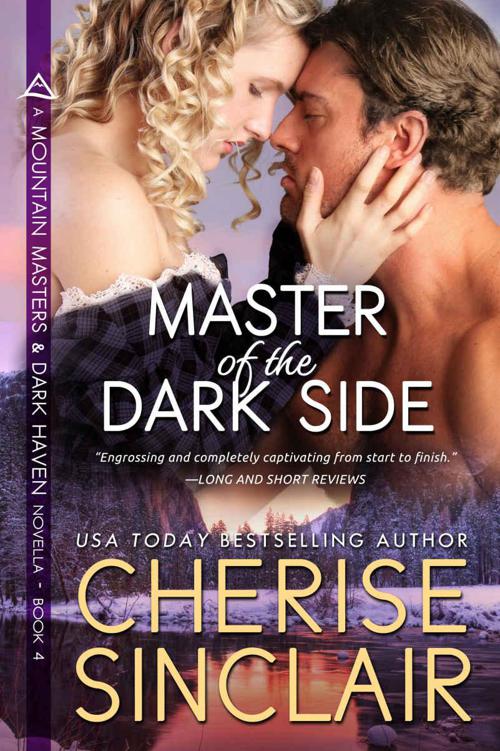 Ms. Sinclair delivers a deliciously sensual and dark drama that throws the reader into a whirlwind of domination, tenderness and desire that is truly delightful. The author’s outstanding talents lie not just in the plotting and pace of the story but in creating the strong, passionate and charismatic characters that run as deep as their sense of honor… Another one for the keeper shelf!

Real Doms terrify her, so Summer plays with lightweights only. And only in the safety of her club, Dark Haven. But on Western Night, the tough cop who wins her in a sub-roping game is as powerful as they come.

That one night could be the beginning, but instead it’s the end. She won’t play outside the club and he lives too far to visit often. He’ll just have to find a way to forget her…or get her in his ropes to stay.

This story wrung me out, pulling me ‘every which way’ through the full gamut of emotions. I was however, left sated and limp as a cooked wet noodle on the floor… Wow, such a terrific story!

Want to be notified of the next release?

This book is a work of fiction. The names, characters, places, and incidents are products of the writer’s imagination or have been used fictitiously and are not to be construed as real. Any resemblance to persons, living or dead, actual events, locales, business establishments, or organizations is entirely coincidental.

All rights reserved. This copy is intended for the original purchaser of this eBook only. No part of this eBook may be reproduced, scanned, or distributed in any manner whatsoever without prior written permission from the author, except in the case of brief quotations embodied in critical articles and reviews.

Warning: This book contains sexually explicit scenes and adult language and may be considered offensive to some readers. This book is for sale to adults only, as defined by the laws of the country in which you made your purchase.

Disclaimer: Please do not try any new sexual practice, without the guidance of an experienced practitioner. Neither the publisher nor the author will be responsible for any loss, harm, injury, or death resulting from use of the information contained in this book.

The books I write are fiction, not reality, and as in most romantic fiction, the romance is compressed into a very, very short time period.

You, my darlings, live in the real world, and I want you to take a little more time in your relationships. Good Doms don’t grow on trees, and there are some strange people out there. So while you’re looking for that special Dom, please, be careful.

When you find him, realize he can’t read your mind. Yes, frightening as it might be, you’re going to have to open up and talk to him. And you listen to him, in return. Share your hopes and fears, what you want from him, what scares you spitless. Okay, he may try to push your boundaries a little—he’s a Dom, after all—but you will have your safe word. You will have a safe word, am I clear? Use protection. Have a back-up person. Communicate.

Know that I’m hoping you find that special, loving person who will understand your needs and hold you close.

And while you’re looking or even if you have already found your dearheart, come and hang out with the Mountain Masters.

When a tiny brunette submissive walked by wearing nipple clamps, a purple thong, and cowboy boots, he could only shake his head and laugh. Amazing. At least with all the jeans and cowboy shirts, he didn’t stand out like a redneck from a small mountain town.

Under the Hunts’ direction, he’d dominated a submissive. Tied her up. She’d melted under his hands, his commands, and climaxed from a hard pinch on her nipples. Damn him for ever getting sucked into this, because now…now when he had sex, he knew exactly what was lacking. He wanted—needed—the extra punch of a woman’s willing submission.

As he looked around, he spotted the crowd parting to let a man pass. The dom, dressed in a gambler’s rig of striped silk shirt, ornate burgundy vest, and arm garters, walked up and extended his hand. “Virgil Masterson, I believe?”

“That’s right.” Virgil gave him a cop’s assessing once-over: six-two, muscular, around two hundred pounds, black hair in a long braid, black eyes, reddish brown coloring. He took the man’s hand, noting the powerful grip. The guy did more with his time than sit around the bar.

“The Hunt brothers asked me to watch for you. I am Xavier, the owner.”

Xavier acknowledged the compliment with a tilt of his head. “The street level is for dancing, drinking, and watching the shows.” He gestured to platforms on either side of the long room, one empty, the other with a domme whipping a slender male sub. “They said you’re new to the scene?”

Xavier said mildly, “But if bondage and pain is what the submissive wants? Needs?”

Then he was in trouble. “Guess I’ll figure out where I draw the line.” That’s what he’d come here to do, after all. To observe and investigate in a place well away from Bear Flat.
To figure out if I really am a pervert.

“If the Hunts worked with you, I assume you know the usual courtesies of observing quietly, not touching another dom’s sub or equipment, and the basics of safe, sane, and consensual play.”

“Then enjoy your evening. The dungeon is downstairs. If you’d care for an introduction to a submissive, please don’t hesitate to ask.” Xavier glanced at Virgil’s well-worn boots and smiled. “Calf roping starts in a bit—sub roping, in this case. You might find it a good way to meet someone.”

After Xavier left, Virgil checked out the upstairs. A bar was located in one corner, surrounded by tables. The giggling submissive riding a mechanical bull held his attention for a while. Line dancing. A poker game tempted him briefly, but a pretty brunette sub kneeling at one man’s feet kept giving her dom concerned glances. Too tense for his mood tonight.
You’re not here to play cards, Masterson.

He took the stairs down to the dungeon. And stopped. At the Serenity Lodge parties, only a handful of scenes occurred at any one time. Dark Haven had…more. His gaze drifted down the long room: several St. Andrew’s crosses, stocks, and a whipping post. Sets of chains dangled from a low rafter. Cages, spanking benches, sawhorses, bondage tables. Scene after scene. Throaty moans, high screams, whining, whimpering, and groaning.
Jesus, Mary, and Joseph
. All his cop instincts shouted for him to get his cuffs out and start arresting people.

Yet the dominant in him noted that the scenes were hot as hell. Like the redhead getting wax poured on her nipples. Glazed eyes. Moaning. Her dom had spread her legs to let everyone view her soaked pussy.

At the next scene, a dark-haired domme ran a device like a pizza cutter with tiny metal spikes around a man’s nipples. Poor guy had a woody so hard a cat couldn’t scratch it.

Unlike the scent of beer, cologne, and perfume upstairs, the dungeon smelled of sweat and leather and so much sex that he could feel testosterone flooding his veins. He stopped at one area to watch a dom with a single-tail delicately lashing a dress from his sub. Fucking fine technique.

Feeling a presence beside him, he looked down to see a pretty little submissive.

“Excuse me,” she said, her melodic voice like a meadowlark in a valley of pain.

He stepped back to let her edge past and gave her a slow once-over.
Very nice.

A leather skirt barely covered her grabbable, round ass. Heeled cowboy boots showcased bare legs, and her full breasts pushed a laced-up leather vest open so far her nipples almost showed. Golden blonde hair, straight and silky, hung to her midback. When she looked back to whisper a thank-you, her eyes were as clear and blue as the sky over the Sierras in June.

He sighed as the little sub knelt beside the dom. Apparently she wasn’t available. Then again, she sure didn’t focus on her dom’s every movement as if she wanted to serve him with all her being. With the Hunts and some others he’d seen, their dominance over their subs showed up like heat waves in July. And didn’t that sound a tad too woo-woo for a cop?

With a snort, and one last regretful look at the sub, Virgil wandered on.

Refusing to listen
to Mark whine, Summer Aragon dragged him away from the whipping scene to the upstairs stage. The calf roping had started.

Bouncing on her toes, she watched a dom chase after a collared older submissive on the raised platform. Almost to the end, he managed to grab her and toss her down on the well-padded platform. As he tried to bind her ankles and wrists, the crowd roared advice, cheering in yeehaws and whoops and whistles.
God, didn’t that look like fun?