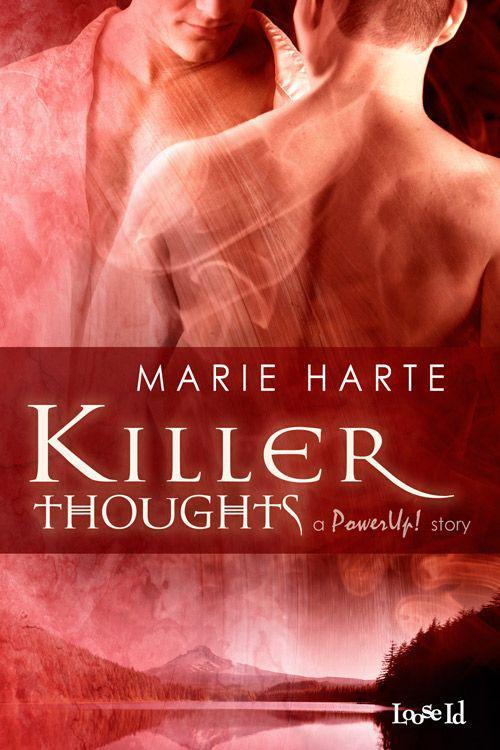 Ian Ryder swore and glared at the familiar face across the gym, coming closer. Cropped ash-blond hair, mysterious green eyes that saw everything, and a firm, uncompromising mouth graced a face worth millions. He watched as Owen Stallbridge, the recent bane of Ian’s existence, walked past the open spinning class, where women and men raced like mad and still went nowhere.

Bikes
. Ian snorted. Why pedal when you could drive? Owen turned in his direction, and he crouched low behind the desk, squatting with his back against the wall, hoping Owen would see no one sitting there and continue on.

Jack Keiser, Ian’s boss and a man who never let him get away with anything, asked in a flat voice from the doorway. It had been too much to hope that Jack’s new fiancée would turn the cold bastard into a man with feelings. The guy still acted like he had a rock where his heart should be. And with his massive size, he stood out like a sore thumb.
Damn it, Jack. Go away.

“Uh, I dropped a pencil.” Ian felt around him on the floor to maintain the pretense, then slowly eased into the chair behind the desk in the glass-walled office, making sure to keep himself small. Though the Nautilus machines in front of the office didn’t obscure his view out, maybe from Owen’s angle they’d block visibility to the consulting room. Normally the trainers used the space to talk to their clients and recommend training plans. Ian’s only proposal at this point was for Jack to move his big ass, or better yet, intercept Owen so Ian could dart out the back. But then Jack would know Ian hadn’t been doing his job lately, and he’d—

“Who are you hiding from?”

“Fine. You want to know? Your soon-to-be brother-in-law is stalking me.” A glance up showed Owen bearing down on them, his expression grim. With any luck, Owen would ignore Jack and walk on by to yell at someone else. Then Ian could gear up for his weekend excursion to Portland. He had his eye on a painting being sold at a particular underground auction, a stolen Helzman, circa 1842, worth a quarter million. He’d see it, memorize it, then repaint it from memory and sell it as the original for half that much. If he could keep Owen Stallbridge off his tail.

“I thought you were on night shift this week?”

“Kitty lost a bet with Chloe, so they put me on days.” Kitty, the day manager, did a better job handling him than Chloe. But she wasn’t as much fun as Chloe, whom Ian had learned to finesse into forgiving him for his many ongoing transgressions…when her cute boyfriends weren’t hanging around. Trust Chloe to snag
two
hotties when Ian still couldn’t find one decent, wealthy sugar daddy in this town.

Jack didn’t smile, but Ian saw the humor in the slight crease at the corner of his eyes.

“Still doesn’t explain why you’re hiding from your boss.”

Technically, Owen and Jack ran the gym. Except Owen remained a silent partner and investor while Jack managed the day-to-day. Jack Keiser, lead psychic and all-around ball breaker. Not a guy anyone would want as an enemy, not when he could bench-press two of Ian and not break a sweat. Ian still hadn’t quite figured out what Jack’s superpower was, unless brute intimidation could be considered a psychic skill.

He glanced around at the upscale gym, noting the many people working out. Since opening the place over a year ago, Jack and his band of supposed trainers—ex-government psychics—had steadily grown in popularity. It didn’t hurt that they all had looks, brawn, and that pervasive energy one could feel. What the community didn’t know was that downstairs, in the secret, private gym, the psychics
had
to train to remain sane and safe.

Though Ian himself had never been physically altered or drugged by the scientific geniuses in Washington DC—whose facilities didn’t officially exist—he’d seen the results. And he had to admit, they worked. The Psychic Warfare Program—PWP—had turned weak psychics into monstrously strong ones. Gene therapy aided those needing control and precision, so that the rough, explosive powers of the pyro- and telekinetics no longer threatened to destroy everyone around them.

The side effects sucked, though. Without the constant barrage of drugs, the psychics went wrong. Out of control, some even turned psychotic. So although Ian despised Jack’s “work the body, work the mind” mantra, he understood it.

Nature had gifted him with a naturally lean frame, however. So he did his best not to work up a sweat here. Not that he minded the muscular hotties who roamed the halls of the PowerUp! Gym. Even the few normal employees Jack kept on hand were pretty. And speaking of pretty… Ian glanced again at Owen, who’d stopped to smile and talk with some skinny guy on a treadmill. Owen looked like a model on a bad day, but next to Skinny Guy, he fairly oozed sex appeal in those shorts and plain T-shirt.

Oh yeah. Give me a nice upper body, rock-hard abs, and muscular thighs any day. Turn around, just a little
… Owen turned, and Ian sighed. He raised his head to see that tight ass and broad back. Sure, Owen was a pain, but God, what a body. The eye candy alone almost made the annoyance worth it.

Ian swore. “Shit, Jack. He’s like a rabid dog. I can’t work under these conditions.” Ian meant it. For the past month, he’d been assisting the authoritative playboy too smart for his own good. A lot of work for little results. “He’s looking for something I can’t find. And if I can’t find it, it doesn’t exist.”

Jack frowned. “Something or some
one?
I was under the impression he’s hunting a man.”

“Does it matter? Either way, my sources haven’t seen it or him.” Ian sighed. “I haven’t had a day off in weeks.”

“Yeah, four of them. Suck it up, princess. You’re finally going to earn your keep around here.”

Ian tried to look affronted, but Jack didn’t blink. “Oh come on. I do my job.”

“You cause more problems than you’re worth.”

“Hey. I hooked you up with a place to stay on your trip to Germany. I helped you find the love of your life.”

“And you nearly started World War III while I was gone. You fucked up our filing system. Aidan still wants to rip your head off. Chloe can’t find the extra set of keys I left for her—and don’t deny it; I know you have them somewhere.”

“And let’s talk about the law. Do you know how many times I’ve had to talk down the locals? And how about the Feds still keeping an eye on us? One wrong step and they’ll come down on us like a ton of bricks.”

The temperature in the room seemed to drop several degrees as Jack’s wolflike stare turned even more predatory.

Ian tugged at the collar of his T-shirt. “Now, hold on. Those Feds are permanent. They rotate them. No matter what I do—or allegedly have done—those two are going to stay until we all die of old age or move.”

“Oh? So stealing Senator Clancy’s crap and selling it back to him for twice what it’s worth was fair game?”

“Please. He’s a thief. And he’s retired,” Ian reminded him. “He stole them in the first place. I was only giving him a taste of his own medicine.” He frowned. “How did you hear about that anyway? I know he didn’t call the cops. And he can’t trace me as the seller.”

“My point is, you can’t keep your nose clean, and it’s a liability I don’t like.” Jack leaned closer to Ian, his eyes like pinpoints of ice.

It took balls, but Ian dared him. “Prove it. Go ahead. See if you—or the law—can make anything stick.”

Jack straightened and sighed. He crossed his massive arms over his broad chest and snorted. “I would if I could catch you at anything. I know for a fact you’re still selling counterfeit artwork, though you’ve been warned
repeatedly
to stop.”

“I have no idea what you’re talking about.”

Jack frowned. “How do you have time for this shit? I thought Owen was keeping you busy with that project of his.”

“I’m plenty busy.”
Trying to come up with some excuses to keep you and the studly millionaire off my back.

It wasn’t that Ian couldn’t leave if he wanted to, but he liked working with psychics—people like him. He saw patterns in things others couldn’t, and he could repeat those patterns down to the last detail, which made his skills as a forger remarkable. Life in the big, bad world was freer, but it came with risks. Here, Ian knew a sense of protection with the team. And being surrounded by people who could blow you up with a thought or set fire to your whole world made Ian feel safe, safer than he’d been in a very long time.

“Right.” Jack sighed. “Owen needs your help. You do what he asks.”

“More like orders,” Ian mumbled. “Man has never used the word ‘please’ once.”

“
Please
get yourself back to my office and finish what I gave you to do
yesterday
,” Owen said from the doorway, standing behind Jack. “How’s that?”

Jack stepped to the side so Owen could enter. “Owen.” He nodded. “Ian was just telling me you’re a slave driver. That you’re working him way too hard.”

Owen raised his left brow in that way that drove Ian crazy. So sexy, yet so irritating at the same time.

Ian hated this twitchy feeling he had when in Owen’s presence. From the first, he’d sensed the power in Owen and been curiously drawn to it. But Owen didn’t seem manageable. At all. And Ian controlled his relationships. He called the shots. He had others fawning all over him, doing whatever
he
wanted to keep him happy. With Owen, he’d never have that control, not with a man that wealthy and fine.

Owen continued in a husky voice that put Ian in mind of satin sheets and sweaty, carnal teasing. “Is that right, Ian? Am I working you too hard?”