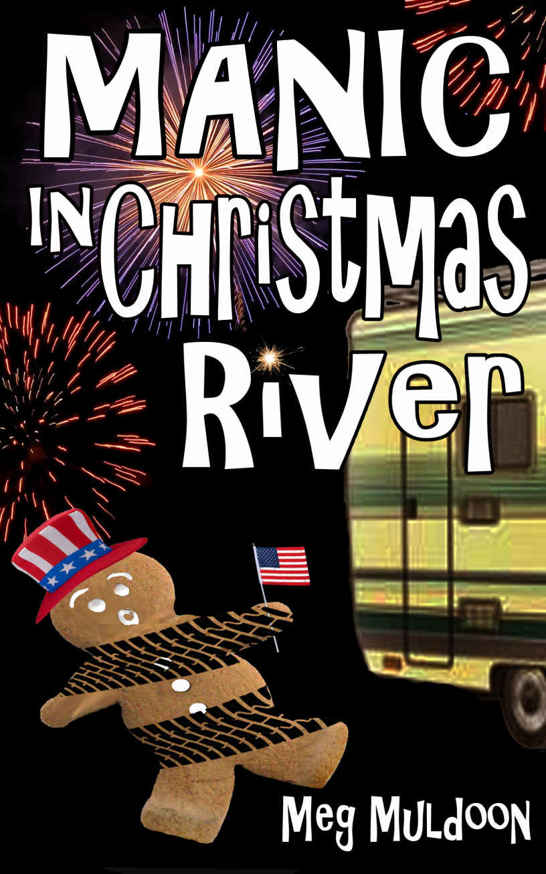 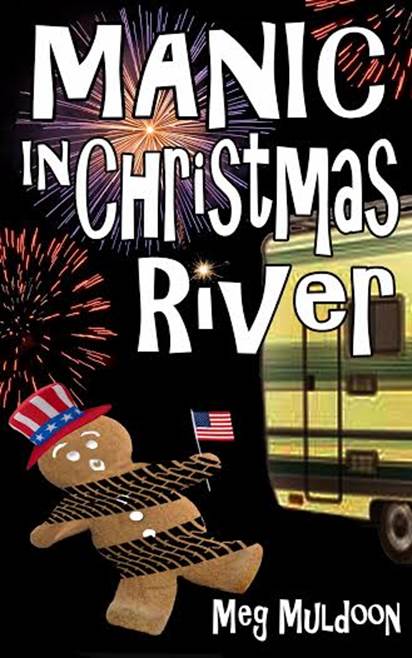 This is a work of fiction. Names, characters, places and incidents are either the product of the author's imagination or are used fictitiously, and any resemblance whatsoever to actual persons, living or dead, business establishments, events, or locales is entirely coincidental.

The fork-wielding mob of Christmas River tourists jabbed their spiky utensils into the air and gnashed their sharp teeth like a pack of rabid wolves.

A moment later, one of the mob leaders threw his fork aside, lifted his beefy hands up into the air, and shattered the glass pastry case in abject hostility.

I opened the oven. Burnt black smoke streamed out in thick plumes. Flames licked out from the aluminum rounds that had once been Firecracker Cherry pies.

From somewhere amidst the broken glass and smoke, baby Laila wailed like a fire engine headed for a four alarm fire.

My eyelids flung open and I gasped in terror as the noise broke through my nightmare the same way a rock breaks through glass.

The back of my head was soaked with sweat. My tongue felt thick and swollen, my throat, cracked and dry.

But there was no mob. No chanting. No babies crying in fires. Just the sound of soft murmuring.

I looked around the familiar room, trying to figure whether I was still in the dream, or if I’d returned to reality. For a split second, I wondered if the mob had gotten me and if I was now in some sort of limbo awaiting permanent relocation.

But then, a strong pair of arms hooked around my waist, and I knew I was closer to heaven than any of that.

“You had another one?” he whispered in a scratchy voice.

“Was I talking in my sleep again?” I said.

“Yeah. You were shouting something about pie,” he said. “It sounded like you were in
Young Frankenstein
or something.”

He let out a chuckle.

If only the nightmare had been as funny as the Mel Brooks movie.

I knew it sounded stupid when I retold it by the light of day. But my recurring nightmare about the hungry mob threatening to turn cannibal on me if I didn’t feed them pie was nothing short of positively terrifying.

Noticing that I didn’t find it quite as humorous as he did, Daniel stopped laughing. He pulled me closer to him.

I trailed off. Unable to express the mood in any way that made sense.

“I don’t know. Like something terrible is going to happen.”

A chill suddenly passed through me, and I shivered.

I turned back to look at him. A shaft of moonlight cascaded across his face, dancing along his rugged, familiar features.

I leaned forward and kissed him lightly on the lips.

He smiled. But after a few moments, the smile faded and that concerned look, the one he often had when he was in the middle of a case at work, took its place.

I had a feeling the look had something to do with his phone ringing. I didn’t know exactly what time it was, but any way you looked at it, it was either too late or too early for a phone to be ringing.

“Depends on how you define the term
okay
,” he said. “If okay means that nothing major’s happened and nobody’s hurt, then yes, everything’s fine.”

He rubbed his face.

“However, it does appear that to keep things okay, the Sheriff of Pohly County is going to have to drag himself from his wife and warm bed at 3 o’clock in the morning to stop a drunken George Drutman from rolling his RV over a troop of boy scouts and driving into Waldo Lake.”

I sank my head into his arm and let out a groan.

“Can’t Billy or Owen or Trumbow deal with all that?”

“Billy’s the one who called for back-up,” he said. “Seems George won’t listen to reason and is putting up a fight. Billy thought my, uh, my
diplomatic
skills might resolve the situation.”

I couldn’t say I was all that surprised to hear that George Drutman was acting boorishly, George being the middle-aged train wreck of a man that he was. A rich kid to the bone, George was the sort of man who thought the law just didn’t apply to him

Daniel pecked me on the cheek and then let go of me. He rolled out of bed, and I started getting up too. Noticing the movement, both Huckleberry and Chadwick lifted their heads from their own beds near the window and pointed their snouts in our direction, wondering just what their crazy owners were doing up at this Godforsaken hour.

“Go back to bed, Cin,” Daniel rasped, seeing that I was shuffling down the hallway behind him.

Daniel started saying something, protesting the way he always did whenever I wanted to come along on one of his calls. But he stopped talking before the first logical point about it possibly being dangerous could escape his mouth.

My husband knew well enough by now that arguing with me was nothing but a waste of time.

When Cinnamon Peters made up her mind about something, there was little anybody could do to talk her out of it.

Daniel handed me the thermos, and I took a hearty sip of the smooth and silky coffee. The brew, called “Santa’s Reviver,” was made fresh from Christmas River Coffee Shack beans and had a kick that could bring the dead back to life on most days. It made being awake at three in the morning almost bearable.

I returned the thermos to the cup holder and looked ahead. The high beams of the truck illuminated the forest service road, highlighting its numerous potholes, dips and bumps. Outside of the beams, the night glowed blue under the swollen face of the full July moon.

Though it was early, it felt good being on the road instead of back at home, where I would still be lying awake, haunted by the lingering feelings of the bad dream.

The recurring nightmare had started a few months earlier, arriving with the warmer temperatures. In the dream, I was never able to please the hungry, hostile crowd in the pie shop, and I was never able to get to the oven in time to stop the pies from burning to a crisp. Neither was I ever able to save baby Laila from the rabid mob.

I had a feeling that the nightmares had something to do with the increase in visitors the pie shop had seen these past few months. So far this summer, we were setting all-time highs in terms of sales and customer visits. Folks were lining up around the block by 7 a.m. most mornings just for a slice of pie, and Tiana, Tobias, and I were all working our hands to the bone trying to keep up with the demand. Most days lately, we were fresh out of every variety of pie by 2 p.m., despite my attempts to keep the kitchen stocked with ingredients.

I wasn’t exactly sure what accounted for the pie shop’s overwhelming surge in popularity, though I suspected it had a little something to do with an article that had come out in a recent issue of
Sunrise Magazine
, a west coast living and travel magazine. The article had been about Christmas River, promoting it as a must-visit small town in the Pacific Northwest. The article had mentioned
Cinnamon’s Pies
as one of the best establishments in the town, and recommended it highly to the magazine’s readership, saying that there was no better pie in the West.

I had been tickled pink after reading the article: it was the kind of thing that every owner of a small bakery dreams of.

And though I was excited by all the interest, I had also been overwhelmed these last few months at the long lines of hungry visitors who were willing to wait upwards of an hour for a single slice of Firecracker Cherry or Moundful Marionberry or Blueberry Cinnamon pie.

But I couldn’t complain about the increase in business. Things were going great, and for the first time since opening my pie shop, I was actually beginning to save some money. It was just that sometimes I found myself staring out the back deck window, watching the bright green aspen trees sway in the fresh mountain wind, and a fleeting thought of all that I’d be missing this summer would cross my mind.

Summer was hard to get to in Central Oregon. There were months and months of bleak, cold days, icy roads, and heavy snowfall to contend with before getting to the warm sparkling days of summer. And it felt like a shame to spend every single hour of daylight slaving away in a small, hot, cramped kitchen instead of fishing or camping up in the mountains.

It made me a little sad to think that my chances of getting out into the great outdoors this summer were about as good as my grandfather Warren saying ‘no thank you’ to a double fudge brownie. Or to a cold pale ale, for that matter.

Points of Origin by Marissa Lingen
TIED (A Fire Born Novel) by McMann, Laney
Under the Spanish Stars by Alli Sinclair
Frag Box by Richard A. Thompson
The Paris Key by Juliet Blackwell
Debris by Kevin Hardcastle
Core Topics in General & Emergency Surgery: Companion to Specialist Surgical Practice by Paterson-Brown MBBS MPhil MS FRCS, Simon
You Had Me at Halo by Amanda Ashby
Citizen of the Galaxy by Robert A. Heinlein
Her Man Advantage by Joanne Rock