Read Liberate Yourself (The Desires Unlocked Trilogy Part One) Online

Liberate Yourself (The Desires Unlocked Trilogy Part One) 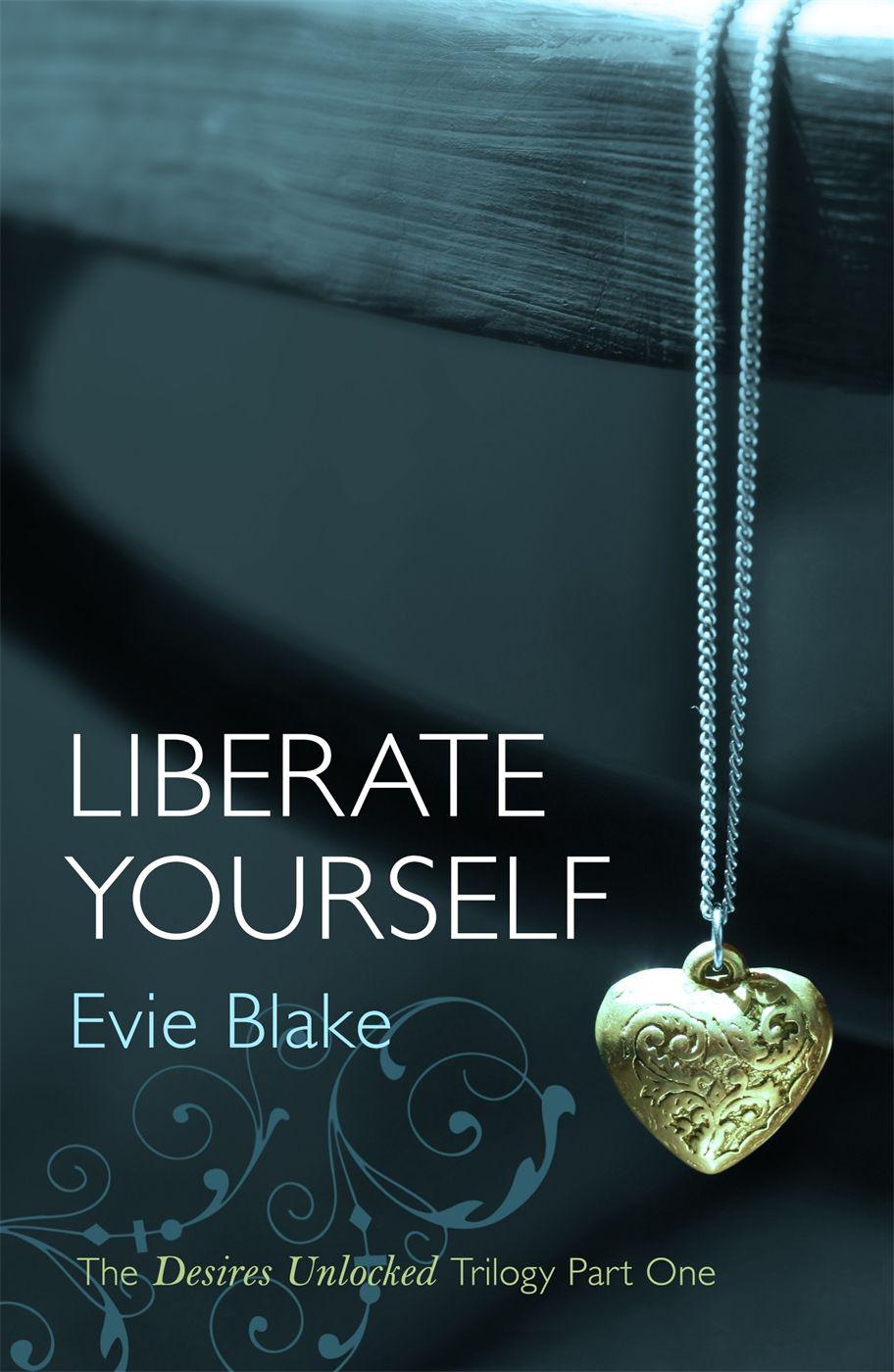 Freely inspired by the character Valentina created by Guido Crepax

Evie Blake is from London. She is married with two children and is currently busy writing her next novel. For more about Evie Blake visit her website
www.evieblake.com
or follow her on Twitter @EvieBlake1

Also by Evie Blake and available from Headline
:

Valentina lives with her lover, Theo Steen, in Milan. They have an explosive sexual connection . . . but are they in love? As Valentina questions her true feelings for Theo, she finds herself drawn into Milan’s shadowy, sensuous underworld – one which allows her to explore her deepest desires.

Valentina and Belle are two women living in different times, each poised on the brink of a passionate, all-consuming love affair.

THEY CARRIED HER NAKED DOWN TO THE WATER’S EDGE.
They laid her down upon the still warm sand, her feet facing the sea. She could feel it lapping against her ankles as if it was another lover leaving icy kisses upon her toes.

The night was moonless, but a few stars gleamed, tiny pins of hope, tears within her heart. It was so dark she couldn’t see their faces any more. She felt as if she were spinning out of the real world and into another cosmos. A place inhabited by her fantasies. Her companions had become something other than mere men. They were shadow creatures pulsing with their need, their desire. Although she was out in the open, by the sea, she could just as easily be inside a dark cave or a blacked-out room. She was a little frightened, but not enough to want to stop. She was becoming like them: her other self.

VALENTINA PUSHES HERSELF UP ON TO HER ELBOWS AND
gazes at her lover. Six months they have been living together. She leans over and carefully arranges her arm across Theo’s back. She loves to do this while he is sleeping, when he doesn’t know how she likes to imagine the two of them together, and all that could be possible. Tenderly she strokes his flawless skin, letting herself express a rare moment of affection. It is a gesture she is careful never to make when Theo is actually awake.

Valentina examines her flaxen whiteness against the sallow colouring of Theo Steen, and considers what a perfect contrast the two of them are. She is as pale and fine boned as her beloved twenties icon Louise Brooks. He is dark skinned, more sultry than any Latin lover she has ever known, yet with disturbingly bright blue eyes. It would make more sense if it were she who was dark. She is after all the Italian, while Theo is from New York, his parents Dutch immigrants. She doesn’t
know much about his background, but it appears very different from hers. He is close to his parents, both of them, and to Valentina’s eyes his childhood was charmed. So much attention and expense lavished upon him. Theo is an accomplished cellist, equestrian and fencer, as well as speaking a myriad of languages. He could have gone into any profession he chose. He is one of those men she thought would irritate her. A privileged high-achiever who doesn’t need to worry about making a living, and can indulge full-time in his passion – the study and analysis of modern art. Yet she did not dump him at the first opportunity, as she thought she might; instead here he is in her bed, lost in the innocence of sleep right beside her. He is
living
with her.

Valentina looks down at her sleeping lover. Theo is lying on his stomach, his head turned away from her. She wonders where his dreams take him. She wonders if he will wake with the memory of her touch upon his skin. Last night she wanted to make him come so much, and yet strangely she had no desire to have an orgasm herself. This is not usual for her, not very Valentina, she thinks. Even now she is not demanding morning sex. At some point does the passion fade? If you took away the sexual desire between her and Theo, would there be nothing left? Strangers before their union; and strangers again afterwards. Is it time to end it?
No, not yet
, a voice begs inside her head, and she tries to swallow her anxiety. She is panicking unnecessarily. This is just all so new to her, to be cohabiting.

She has never shared her apartment with anyone else, not
since her mother left. It still startles her how easily it all fell into place, the fact of Theo moving in. She knows why she asked him. It was a knee-jerk reaction to her mother’s warning. Is he using her? Instinctively she rejects the suggestion. He was so hesitant about accepting her offer. Asked her several times if she was sure. There
is
something different about him. Already he has seen her at her lowest, and he didn’t leave.

Valentina knots the end of the sheet around her finger, pulls it tight. A ring of white cotton pinching her flesh, making her bite her lip. It’s because he doesn’t take anything for granted, she thinks; despite his easy life, he never stops trying to please her.

She lies back down on the bed and smiles up at the ceiling, studying each glinting crystal of the chandelier as she dwells on last night. She tentatively runs her tongue over her lips. She can still taste him. She savours the saltiness of her lover as she recalls how she caressed him with her mouth, pushing him as far as he could go, not stopping despite his plea to be inside her. She would not allow it. She wanted everything to be focused on him. And so she kept on going: licking, teasing with her teeth, flicking her tongue around his length and squeezing his velvet hardness tight between her lips. She needed to feel his abandon inside her mouth. His vulnerability, and her power. She had taken him over the edge. And when Theo cried out her name, it was like a flare to her heart. Burning her and yet warming her at the same time, filling her with the dual sensations of fear and satisfaction. How could
that be? Normally she doesn’t like her lovers to speak, let alone cry out. She always insists on making love in silence. She hates false proclamations of love, uttered in the heat of passion. Yet Theo called to her, and deep down inside her there was an answering echo, despite her conscious denial. Now the salty flavour of him lingers still upon her lips. No wonder she dreamt of the sea. She closes her eyes and pushes away unwanted images, her smile fading. But they resurface, these disjointed sensations from her dream. Sinking under water, unable to swim up to the light; darkness, suffocation.

She opens her eyes. Theo is lying on his side, his head resting on his hand, his clear blue eyes studying her.

‘I had a bad dream last night.’

He pulls her towards him, and she lets him fold his arms around her. She closes her eyes and feels his chin as he rests it on the top of her head.

‘Do you want to tell me about it?’ he asks, his voice muffled against her hair, but she doesn’t reply, not immediately, and he doesn’t push her. It feels so good to be held in her lover’s arms; she doesn’t want to take them back to her nightmares, ruin a fresh new day with her baggage.

‘Okay, darling.’ He kisses the top of her head. The endearment trips off his lips so easily. Can he really mean it? She finds it hard to do the same, the words sticking in her throat.
Darling
. She stiffens in his arms, wanting now to push
away from him. Theo gently unravels his body from around her, as if sensing her need for distance.

‘I’ll make some tea,’ he says, getting out of bed, studiously avoiding eye contact. She watches him in all his glorious nakedness as he strides across the room. He wraps her silk dressing gown around himself, but it only adds to his manliness, emphasising the masculine contours of his body. She feels a stirring below her navel, deeper, deeper, as she watches him walk out the door. Why did she chill in his arms? Now she would like to make love.

She glances at the clock. It’s already after seven. She should be getting up; she has a busy day ahead, yet still she cannot stir from the sanctuary of their bed. She yawns and stretches, awaiting Theo’s return with the tea. She is glad she didn’t blot this morning with her narcissist fears.

Valentina isn’t fond of the past. She has never understood the obsession amongst her contemporaries with relationship transparency, the need to dredge up your personal history and expect your lover to share it. It bemuses her how so many young women want to manipulate their boyfriends through pity. The last thing she wants is to be a victim. No, it is better to never look back, always maintain a little mystery. She believes you should keep your secrets to yourself. That has always been her motto. And yet . . .

She can’t get Gina Faladi’s words out of her head. Said in all innocence, of course. Gina is a sweet person, if a bit too submissive in Valentina’s opinion. She has seen the way she
lets her boyfriend, Gregorio, boss her around. God knows what he is like under the covers. Yet despite this, Gina is one of the best make-up artists Valentina has ever worked with. Last week they flew to Prague together to do a fashion shoot for
Marie Claire
. It was on the way home, after a couple of glasses of wine on board the flight, that Gina asked her the question that now keeps circling inside her head like a big black cat.