Legionary: Viper of the North 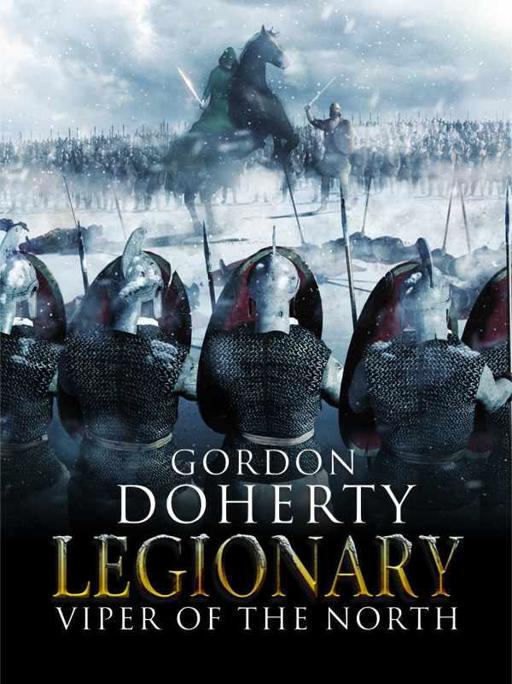 LEGIONARY
VIPER OF THE NORTH

All rights reserved. This book may not be reproduced in any form, in whole or in part, without written permission from the author.

The Roman Empire is crumbling, and a shadow looms in the east . . .

STRATEGOS: BORN IN THE BORDERLANDS

When the falcon has flown, the mountain lion will charge from the east, and all Byzantium will quake. Only one man can save the empire . . . the Haga!

Mithras, God of the Midnight, here where the great bull dies,
Look on Thy children in darkness. Oh take our sacrifice!
Many roads Thou hast fashioned: all of them lead to the Light,
Mithras, also a soldier, teach us to die aright!

‘A Song to Mithras,’ Rudyard Kipling

The Eastern Roman Empire circa 376AD 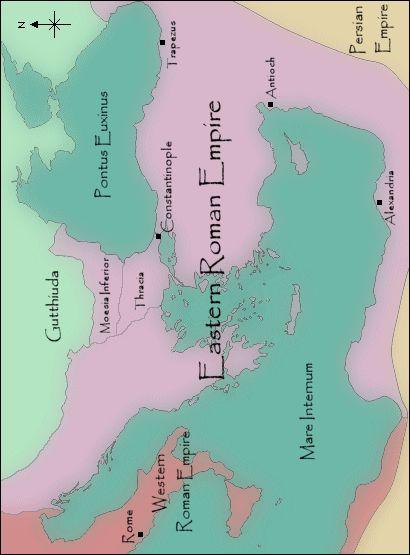 The Danubian
Limes
and Surrounding Lands circa 376AD 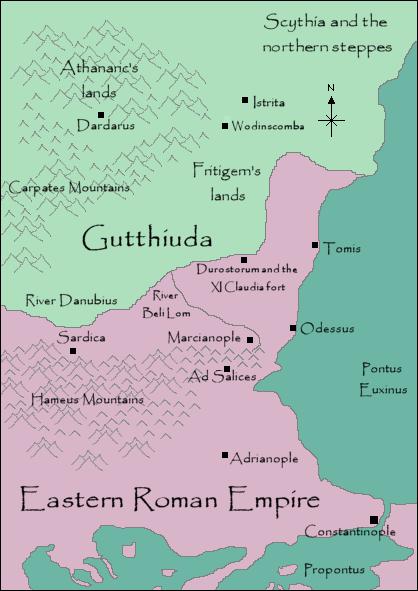 On the northern lip of Constantinople, just a stone’s throw east of the Prosphorion Harbour, the midday heat baked a secluded wharf. A small party of legionaries from the wall garrison stood there, gazing across the shimmering waters of the Golden Horn to the northern headland. Behind them, the sea walls hid them from the grandeur and bustle of the great city, with only an occasional muffled roar from the Hippodrome echoing onto the dock.

Optio
Traianus shuffled in discomfort; sweat trickled down his back underneath his scale vest and the salty sea air did little to quash his nagging thirst. His hooked nose wrinkled and he shielded his eyes from the sun’s glare as he scanned the waters once more. Only trade vessels and fishing boats dotted the placid surface while the galleys of the imperial fleet lay docked nearby and unaware of what was to take place on this wharf. He shuffled again, one foot tapping restlessly.

Traianus looked to his superior and frowned; the ageing, white-haired centurion’s craggy face was curled into a baleful grin, and his hand seemed overeager to rest by his scabbard. He darted a glance around him to see that the other eight legionaries wore the same looks. Then he noticed something on the battlements of the sea walls; a gleaming conical helmet with the distinctive noseguard of a
sagittarius
. Then another, and another.

‘Archers too, sir, to oversee an exchange of prisoners?’ He asked Valgus. ‘This may seem a little heavy-handed to our . . . visitor?’

‘Then you do not know the true measure of the man who comes here today, Optio.’ Valgus turned to him, his eyes sparkling. ‘You know why they call him the Viper?’

Traianus rubbed his narrow jaw;
Iudex
Anzo of the Thervingi Goths, a ruthless warlord hailed by his followers as the Viper.
As the number of previously disparate Gothic tribes pledging allegiance to the Viper’s banner grew, so did the sense of unease within the senate and the upper echelons of the army. And today, the Viper was to come here, to the heart of the empire. ‘I know of him; the Goths say he earned his name because he is a ferocious fighter and slayer of men. A man with the mind of a strategos. Cunning and lethal.’

Valgus shook his head. ‘Aye, but ask the few Romans who have faced him and lived; they will tell you a different story. Sent whole legions to Hades, he has. Slaughtered just as many Roman citizens too. And he’s slain any Goth who has stood in his way. A stone-hearted, murderous whoreson.’ He turned back to the waters, sucked air through his teeth and squared his shoulders.

The gate clunked open and he turned to see a trio of legionaries leading a boy onto the wharf. This was Draga, Iudex Anzo’s son. Draga had lived as a political prisoner in the capital for over a year. Barely ten by the look of it, he wore his fawn hair in the Gothic style, scraped into a topknot, revealing green eyes that were cold and spiteful. He wore a Roman-style frayed, red tunic. This exposed the skin around his shoulders and a blue-ink snake
stigma
that wrapped around his collarbone like a torc.

Suddenly, the boy flicked his gaze up and glared at Traianus. Traianus’ jaw stiffened at first at the cold stare. But behind the coldness there was something else there. Perhaps a glimmer of hope at being reunited with his father. Traianus gave the boy a tentative nod.

‘Don’t look at him and see a boy,’ Valgus whispered in his ear, ‘look at him and know that his mind is filled with the same black thoughts as his father. Yes, they’ll be reunited today, one way or another . . .’

Traianus’ face fell as he noticed Valgus again touch a hand to his sword hilt as he said this. He had not reckoned on drawing his own
spatha
today, but it seemed a certainty now. ‘Sir, the
tribunus
, he briefed us only on an exchange of prisoners?’

‘Aye, he did,’ Valgus shot a furtive glance around to see who was within earshot, then looked to Traianus with his eyes narrowed, ‘but the senate have paid for an alternative outcome.’ He winked and patted a hand against his purse, which clunked with coins. ‘I briefed the rest of the lads earlier. Don’t worry, follow my lead and you’ll get your share, and the tribunus need never know.’

Dread swelled in Traianus’ gut as he glanced around him, then to the gate leading back into the city. Locked.

‘A vessel approaches!’ One of the archers called out from the walls.

All heads turned to the north. A medium-sized cog slipped from the headland and into full view. Its triangular sails were sun-bleached and at the tip of the mast a dark-green banner embroidered with a viper writhed gently in the breeze. It was a run-down ship with only a few mercenary crewmen dotted around the rigging and rows of crates were piled on the deck. They watched as the vessel drew in to dock; all was quiet apart from the creaking of dried-out timbers, the gentle lapping of water on the wharf side and the screeching of the gulls and terns that followed the vessel in hope of a meal. Traianus watched the birds swooping and darting. Despite his best efforts, he could not shake the thought of the carrion birds he had become so accustomed to seeing on the battlefield.

Two tall Gothic warriors, wearing their hair scooped up into topknots and armoured in red leather cuirasses, emerged from below deck. They roped the vessel to the wharf by leaning from the side of the ship. They then laid a gangplank from the ship’s edge to the dockside and walked over it to stand either side. Silently, each erected a pole bearing a smaller dark-green viper banner. Then, from the far side of the deck, two more figures emerged and walked forward.