Invaders from the Outer Rim 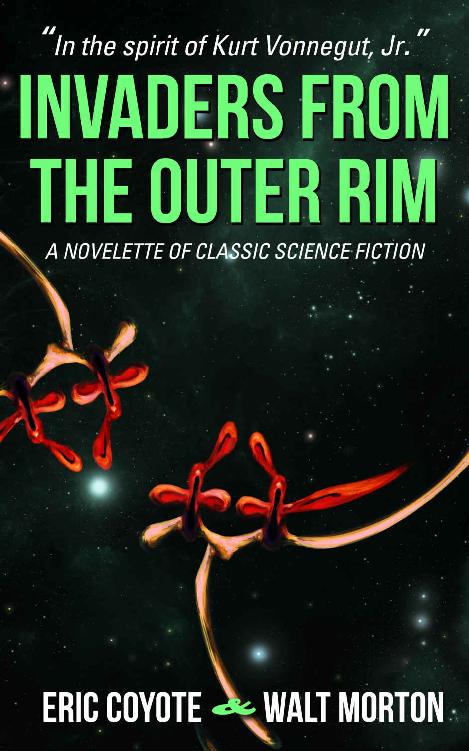 INVADERS FROM THE OUTER RIM

The moral right of the author(s) has been asserted. All rights to INVADERS FROM THE OUTER RIM are reserved by the authors under International and Pan-American Copyright Conventions. No portion of this work may be reproduced in any form whatsoever or transmitted in any form, by any means (electronic, photocopying, recording, or otherwise) without the authors’s prior written permission. Please purchase only authorized electronic editions, and do not participate in electronic piracy of copyrighted materials. This ebook is for your personal enjoyment only. If you would like to share this book with another person, please purchase an additional copy for each person you share it with. They will appreciate your thoughtfulness. Your support of the authors’s rights is appreciated.

This book is a work of fiction. Names, characters, places, and incidents are either products of the authors’s imaginations or are used fictitiously. Any resemblance to actual events or locales or persons, living or dead, is entirely coincidental. All of the characters, incidents, and dialogue, except for incidental references to public figures, products, or services, are imaginary and are not intended to refer to any living persons or to disparage any company’s products.

“There are stars which are billions of years older than our own. Therefore I can imagine civilizations vastly beyond our capabilities. These civilizations most likely exist on the outer rim of our galaxy.”

“You want a fill-up on that coffee, Sheriff?”

Sheriff Danny Olsen was seated at a booth in Shaw’s Restaurant, enjoying an end-of-shift coffee.
He looked up at the waitress and took note of the ample breasts barely contained in Darleen’s stained uniform.
Olsen remembered a time thirty years ago when Darleen was crowned queen of the annual Elks Club parade. Back then she was the most eye-catching woman in town. She was still pretty, if you didn’t look too closely or the room was dark.

“Darleen, I am full to the eyeballs.”

“Let me hot it anyway.” She splashed steaming coffee into the sheriff’s cup. He stirred it in.

After she left, Olsen spiked the brew with a touch of whiskey from his pocket flask. If he started drinking a few minutes before he was off duty, too fucking bad. He had seniority in the Santa Maria substation, which served all of the unincorporated areas of the Santa Maria Valley, including Casmalia, Orcutt, and Garey. His turf was a sparsely populated agricultural hub stuck in the middle of California, but there was always plenty to do. Traffic accidents, family disputes, and petty crime were a part of daily life across America, and the valley was no different.

“What’s up, boys?” Olsen asked. He hoped the strong coffee odor covered the smell of whiskey on his breath.

Olsen studied the two men. They were his contemporaries, early fifties in age. Both were flabby with sagging beer guts and sparse white hair that looked greasy. While Olsen wasn’t as fat as either of them, he wasn’t the trim lad he’d once been. After he started going bald, Olsen shaved his head, gaining some comfort in the summer heat.

“If you’ve got trouble with your wives, that’s not my department. I’m a law officer, not a marriage counselor.”

“It ain’t like that, Sheriff,” Lomax said. “I tell ya, something weird is going on.”

Olsen watched Lomax's trembling hands. The man seemed genuinely frightened, and the sheriff reconsidered their plight. What would put this man in a panic? Bob had been a reliable fixture in the town’s business community for years and led the Rotary Club fundraisers. It was damn odd to see him so upset.

“Bob, what do you mean? I’ll need specifics.”

Lomax’s face flushed and his voice caught. He shook his head and looked at his buddy next to him. Grillo leaned forward and spoke for both of them.

“Sheriff, you remember the funny lights in the sky the other night?”

Olsen definitely remembered. The phone in the sheriff’s substation rang off the hook the previous Sunday with over a hundred complaining calls from residents of the Santa Maria Valley.

“What about that?” Grillo said.

“Jack, we checked it out. People claimed fireworks, northern lights, an outdoor laser concert, and fifty other crazy ideas.”

Olsen looked him directly in the eyes. In his several decades of law enforcement, Olsen couldn’t recall a meeting so oddly awkward.

“It was military helicopters flying to Point Hueneme,” Olsen said.

“That’s horseshit, absolute horseshit!” Lomax exploded. Then he put his face in his hands.

Olsen eyed Grillo, who bobbled his head and frowned. Had they both gone mad? Grillo looked ready to cry, and Lomax was visibly shaking. They weren’t obviously drunk. What was going on?

“If you want my help, I need damn honesty. I’ve interviewed plenty in my time, and there’s something you two ain’t saying. What is it?”

The men shared a pained look, then Grillo nodded, giving in.

“You tell it first,” Lomax said.

“It’s my wife,” Grillo told Sheriff Olsen. “We’ve been married thirty-two years. We’re good Lutherans. Nothing wild about us. Suddenly she shaves all the hair off her pussy and wants me to lick it. She makes me suckle on her coochie parts.”

Sheriff Olsen’s professionalism kept him from laughing, but he could see both men were agitated and dead serious.

“Jack, it’s not unheard of,” Sheriff Olsen said. “If you good ol’ boys consult the Internet you’ll find plenty of experts advising oral pleasures to spice things up, especially in a long marriage.”

“You don’t understand, Sheriff. She said ‘he’ told her to do it. The other man,” Grillo moaned.

Olsen blinked and took in the data. “What other man?”

“The sneaky bastard came in the night while Jack was out bowling,” Lomax interjected.

Olsen sat straighter, suddenly worried. He’d hate to discover a rapist preying on older married women but it would not be unheard of. Perverts lived in towns of all sizes.

“A burglar or a pervert?” Olsen asked.

Grillo shook his head, unable to say more as tears came to his eyes.

“Neither one. It was a spaceman!” Lomax yelled. “One came to my house, too.”

Lomax was now sweating bullets and Grillo looked ready to have a stroke.

Grillo wiped away his tears before he spoke. “Sheriff, I’m not gonna bullshit you. I’ll say it plain. My wife’s pussy tastes like something alien was down there.”

The Big Beautiful Book Club was Santa Maria’s premier ladies-only reading group. Each meeting featured a preselected pairing of books and this month the ladies were eager to discuss
Lady Chatterley’s Lover
and
Fifty Shades of Grey
. Nancy Grillo, the leader of the group, checked her notes. “Let’s start with a controversial question tonight. Does anybody think either of these books should be banned from the library?”

“Hell, no,” Jennifer Waters said. “Sexuality is part of nature. We can’t deny our humanity because conservative prudes get nervous when they read a steamy scene.”

Caroline Lomax was busily mixing drinks, leveraging years spent working her way through college as a bartender. “Ladies, before we go any further, raise your hand if you think this discussion will improve with fruity cocktails.”

Caroline started counting hands, lining up glasses. She hoped she had enough coconut rum because the book club ladies loved booze even more than books.

Lisa Anderson found parking on Hartnell Road. She was already late for the book club meeting but checked her lipstick in the rearview mirror nonetheless.

“Pull yourself together,” she whispered. She was still shaking from her odd experience earlier that afternoon—an experience so bizarre she could barely imagine telling her friends. However, there was one rule at book club: keep no secrets and speak with total honesty. Although Lisa didn’t want to be seen as one of those self-absorbed women who only talk about me, me, me, she was bursting to reveal every detail of her surreal day. It was something of a moral quandary for her.

Then she climbed out of the car and walked up to Suzy’s house.

Caroline teased, “You didn’t miss anything except the first round of cocktails.”

“Honey, what’s wrong? Are you okay? You look so frazzled,” Caroline said. Now all eyes in the room shifted to Lisa. She felt the women curiously studying her.

Like all the other women in the book club, Lisa was middle-aged and overweight. After college, she put on a few extra pounds but ignored the weight gain. When she married and settled into the comforts of routine, the extra mass seemed inevitable. Svelte youth was long gone, so Lisa accepted the new her. “Fat isn’t a flaw, it’s a feature” was her motto.

Lisa’s chubby cheeks blushed even redder with excitement. “The most amazing thing happened to me today.”

“Are you finally pregnant?” Suzy asked.

“You know I can’t have children, Suzy.” Lisa grabbed a brownie and sat on the couch. Caroline passed her a fruity rum drink and she sipped it gratefully.

“Spill. What happened to you?” Jennifer Waters asked.

Nervously, Lisa spoke. “Remember how boy crazy I was in college?”

Lisa wiped sweat off her brow with a napkin before she spoke. “This is so wild I can’t believe it, but I can’t keep a secret, either. It’s too hot.”

“Hotter. I was taking my afternoon nap when I heard somebody walk into the house. Hank doesn’t come home from work until after six, so it took me by surprise. I looked up and there was a strange man standing in my bedroom doorway.”

“Was it the UPS man?” Margo Baker cut in.

Suzy put her hand to her mouth. “Is this going to be scary?”

“Far from it,” Lisa said. “He was absolutely gorgeous. Piercing blue eyes with a lush beard and his hair pulled back in a sexy man-bun. Strangest of all, he was dressed like a pirate. I thought it must be a gag for my birthday, like a singing telegram.”

“Did he say anything?” Caroline said.

“He asked me how my day was going, and when I started telling him, he listened. I talked for over twenty minutes and he never interrupted. Then he told me how beautiful I am.”

Lisa nodded. “Hank is never that attentive or kind. I’m not sure why I wasn’t frightened, but my pirate immediately put me at ease.”

“Get to the hot part,” Caroline demanded.

“I asked him, ‘Who are you? Why are you here?’ And he said, ‘For you, Lisa. I’m here for you.’ Then he pulled off his shirt. His body was rippling with muscles and covered in tattoos. I almost screamed. Hank never looked that good, not twenty-five years ago, not ever.”