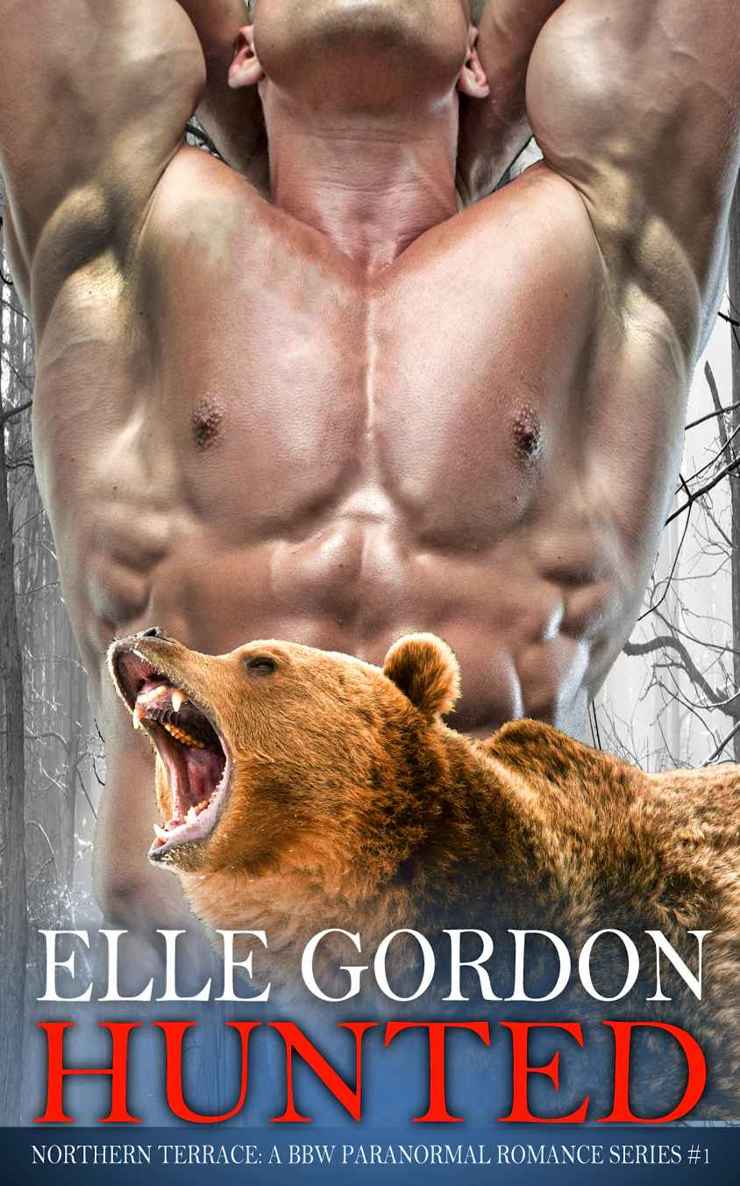 This book is dedicated to V. who dared me write a paranormal series (I’m so glad that I did).

“I’m telling you the truth, Charlotte!” my sister Kayla yelled at me in my dark bedroom. “I
saw
something out there!”

“You probably just saw a deer,” I said sitting up from the bed.

“That wasn’t a deer,” she said much more softly. I flicked on a light and saw that Kayla was shaking with fear. My sister was seventeen years old and very mature for her age. When she was much younger, it might have been easier for me to dismiss her fears. However, now I could see that she was truly terrified of something that she saw that night.

“Come sit down next to me,” I said to her while patting an open spot on my bed.

“If you’re just going to tell me that I’m a liar,” Kayla started. “Then I don’t want to talk about it with you.”

“It’s fine, Kayla,” I said with a much more empathetic tone. “You just woke me up in the middle of the night screaming that you saw something outside of your window. I was startled.”

“You have no idea,” Kayla said as she sat next to me. She still looked utterly terrified, so I wrapped my arms around her.

“I was reading in my bed when–“

“Kayla, it’s two in the morning!” I said interrupting her.

“You’re not our mom, you know,” she said rolling her eyes.

“Yes, but I’m your big sister, and you are visiting me this week, so it’s my responsibility to look over you.”

“Are you going to let me finish this story?” Kayla scathed.

“Like I was saying, I couldn’t go to sleep, so I was reading. I was just using the LED light on my phone as a lamp when the power ran out. It was now completely dark in the room. Wandering around for a bit, I looked for the light switch. When I came up to the window, I saw something moving outside… I’m getting goosebumps just thinking about it.”

“What happened, Kayla?” I demanded. At this point in the story, I was glued to the edge of the bed.

“I’m sorry,” she started again. “It was like a monster or something. Hairy, glowing yellows eyes… and it was looking into your window.”

“Shut up,” I said giving her a sideways look. “You are just making this stuff up to scare me.”

“I’m not, Charlotte!” Kayla screamed. “I’m telling you that I saw something scary in your backyard, and it was watching you in your room!”

“Are you sleeping in here tonight?” I asked through a quivering jaw.

“Yes,” Kayla replied as she nodded her head.

“Good,” I said succinctly. Then I moved open the sheets and turned off the light. We huddled close as I stared out the window. “You don’t think that it can get up here, can it?”

“We’re on the second story,” she said. “It was big, but I couldn’t imagine that it could.”

“It was a monster,” she replied.

“I’m never coming to visit you again, you know.”

“It was probably just a moose that lives in the woods,” I said, hoping that there was a possibility.

“I’m not taking any chances,” Kayla said. Then we cuddled close together in the darkness.

“Are you sure that I can’t convince you to stay another night?” I asked my sister as we loaded her bag into the back of my car the next morning. We were standing across the street from my apartment where the free street parking was ample. This was one benefit to living out in the sticks.

“As much as I love not being able to sleep,” Kayla joked. “I’m going to have to pass.”

“I have no idea what you mean,” I said through heavy eyes. Then I made a big yawn.

“Exactly?” Kayla said as she glared at me. “How are you going to get through work today?”

“Like I do every day,” I started. “With tons and tons of caffeine!”

“You’re crazy!” Kayla laughed. Then she looked across the street toward the building. I saw her eyes widen. “Um, who is
that
?”

My head quickly turned around to see a tall, muscular looking guy with short buzzed hair. He walked out of the apartment below mine and over to his dark green SUV.

“That looks like my neighbor who I never see,” I said with my eyes fixated on him. Shaking my head, I looked back to the trunk of the car.

“What?” Kayla said while rolling her eyes. “It’s not like he can hear me.”

Kayla and I stood beside the tracks as the train pulled up from a distance to the stop.

“Can’t you be sentimental for thirty seconds?” I begged.

“Fine, I’ll miss you, too,” Kayla smiled. “Have fun in your new apartment next to that monster in the forest.”

“
All aboard!
” called a man’s voice over the intercom. “
Northern Terrace now boarding to Eastgate.
”

“Whatever,” I said as I leaned into her for a hug. “Tell mom and dad that I miss them, too.”

“Why?” Kayla said as she hugged me. “You’re just going to call mom on your cell right after I leave.”

“You’re dumb,” I said as I rolled my eyes at her even though I knew that she was correct.

“Why did you move here anyway?” Kayla asked as the train came to a stop.

“I like the forests and the natural feel,” I said breathing in the air.

“Why?” Kayla said with a curved lip. “You always got all of the guys following you around back home. What did they call you again?”

“We’re not bringing this up,” I muttered.

“At least I’ve got an ass!” I joked. Kayla took after our father who was lean and tall. I, on the other hand, took after our mother who had full features everywhere. My family was open to discussing our wide range of differences, so jokes like these were never a threat.

The doors opened the train, signaling the end of my sister’s weeklong visit. We paused for a moment and looked at each other.

“I guess I’ll get on the train now,” she said. “Hope to see you at Thanksgiving.”

“You will,” I said smiling. “Don’t break too many boys’ hearts.”

“As if,” Kayla said as she dragged her rolling luggage into the car.

“Love you, big booty beauty!” she joked as the train car doors closed.

Even though she could be annoying, I missed my sister a lot. I also missed my parents, but I knew that living in a new town was a good change of pace for me. Especially since I had been having a difficult time getting over my now ex-fiancé.

He and I met in high school and were on and off again for years until he decided to pop the question. I was only twenty at the time, but I said yes. Secretly, I knew that it would never work out in the end. What I didn’t realize was that he was also fooling around with my best friend.

For months, my family saw me trudging around the house. I lost about twenty pounds in two weeks when my mother intervened. She had a friend who lived in Northern Terrace, which was just a few hours away by car from our hometown. They owned the apartment building that I moved into and offered me a discounted rate on rent. All I had to do was find a job.

After only a week of searching, I found a secretary position at real estate office. Three weeks later, I moved and started selling lakeside summer and winter vacation rentals. For the first time in my life, I found myself independent, which was healthy for me. The only bad part was how terrible my boss was.

“Charlotte!” yelled my boss Jeffrey as he stormed into my cubical. “You didn’t get these documents signed in time and now I have the entire Goldstein family shrieking at me on the phone!”

“The rental agreement!” Jeffrey yelled. “The renters didn’t sign them, and they trashed the place, so now they are saying that they weren’t liable for cleaning fees!”

Jeffrey was tall and good-looking. Every single female client who walks into our door swoons over his bright smile and pretty blue eyes. At first, I had a bit of a crush on him, too. However, after only working with Jeffrey for a week, the thrill was gone for me. He was one of the most demanding and high-strung people that I had ever met. After only a few months of working there, him rushing into my office while screaming was now the norm.

“I know I had them sign the rental agreements,” I said. “I put them on your desk because you said that the fax was broken.”

“I’ll find them,” I promised as I opened a file cabinet. I was an extremely organized person, which Jeffrey was not. Also, I felt that I did ninety percent of the work while he sat back and just worried about things even if nothing went wrong. Jeffrey, of course, also made all of the money.

After spending an hour looking for the lost papers, Jeffrey closed the office. His complaint was that he was under too much stress and needed to get work done. Driving back home in my car, I realized how thirsty I was. Looking around, I found a small store near a gas station and decided to pull over. After finding the wooden doors to the entrance, I was greeted by the clerk.

“Hello,” he said to me as I quickly looked through the glass doors of the refrigerator unit.

“Hi,” I said without looking at him. “I only see soda in here; do you carry any ice tea?”

“Yes,” he said walking closer to me. “They are on the bottom here.”

The clerk bent down to grab some of the water bottles. Looking across the aisle, I saw a man searching near the candy bars. Something about him looked familiar. He had tan skin, and beautiful, yet dark eyes. Looking around at him more closely, I noticed that he was wearing a tight-fitting muscle tee and blue jeans. Then I realized that I was looking at my hot downstairs neighbor.

“Miss?” asked the clerk. Looking down, I saw that he was holding a bottle of iced tea at me.

“I can ring you out over here,” said the clerk.

“Thank you,” I replied as we headed for the counter. Looking back to the aisle where my neighbor was, I saw that he was nowhere to be found.

The Boy Who Called God "She" by Nancy Springer
Hatred by Willard Gaylin
Oogy The Dog Only a Family Could Love by Larry Levin
The Margrave by Catherine Fisher
A Bedroom in the Wee Hours of t by Stephen King
When Hope Blossoms by Kim Vogel Sawyer
Fueled by K. Bromberg
La caída de los gigantes by Ken Follett
Incredible Shrinking Kid! by Tony Abbott
The Parkerstown Delegate by Grace Livingston Hill