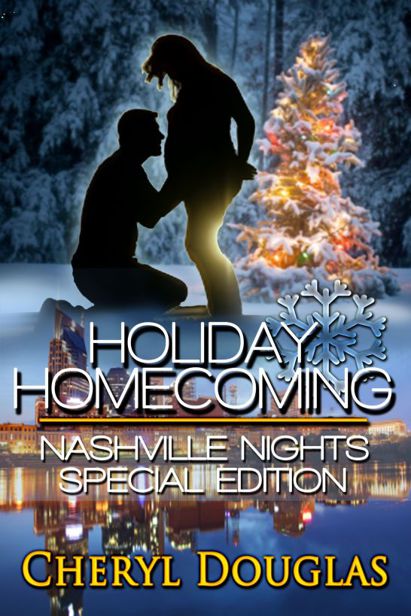 Special Edition in the
Nashville Nights Next Generation Series

All rights
reserved. No part of this book may be reproduced, including
photocopying, graphic, electronic, mechanical, taping, recording,
sharing, or by any information retrieval system without the express
written permission of the author and / or publisher. Exceptions
include brief quotations embodied in critical articles and
reviews.

Persons, places
and other entities represented in this book are deemed to be
fictitious. They are not intended to represent actual places or
entities currently or previously in existence or any person living
or dead. This work is the product of the author’s imagination.

This ebook is
for your personal enjoyment only. This ebook may not be re-sold or
given away to other people. If you would like to share this ebook
with another person, please purchase any additional copy for each
reader. If you're reading this book and did not purchase it, or it
was not purchased for your use only, then please return it to
Smashwords.com and purchase your own copy. Thank you for respecting
the hard work of this author.

Trey Turner
and his wife, Sierra, are hosting a Christmas gathering for their
closest friends and family when an expected event forces them to
pull together and help one of their own through a crisis. Will
tragedy strike, forcing Trey to face his worst nightmare, or will
this holiday be the one that helps them all to heal?

Nashville
Nights: The Next Generation Series

Liam Bryson
walked into the master bedroom he shared with his wife, Alisa, and
found her grimacing as she stood sideways, staring at her
protruding stomach in the mirror. Liam thought his wife had never
looked more breathtaking, but he knew the former fashion model was
disconcerted by the changes her body had undergone.

“Hey,
beautiful,” he said, coming up behind her. Her upswept hairstyle
gave him access to the smooth column of her neck, so he took full
advantage, skimming his tongue over the lightly scented skin.

She trembled
in his arms when he drew her earlobe into his mouth. “If you keep
that up, we’re never going to make it to my parents’ house on
time.”

Alisa’s
parents were hosting their annual holiday party for their close
friends and family, and Liam knew they all looked forward to it.
Last year was their first Christmas as a couple, but he already
considered the party the highlight of their busy holiday
season.

“We have a
little time before we have to leave,” he whispered in her ear. “Why
not make the most of it?”

Alisa giggled
and Liam winced when his teenage daughter, Abby, appeared at the
door.

“Can I help
you?” he asked, turning toward her. He still found it difficult
sometimes to believe the baby girl he’d raised was a young woman
now.

She was
attending art school in New York, and they only saw her once a
month, at best. Liam would have given anything to keep her with
them, but when his wife encouraged him to let her pursue her dream,
he knew standing in her way was selfish. He’d made the right call
because she flourished at the prestigious school. Her esteemed
instructors claimed her natural talent set her apart from artists
desperate to earn a living doing what they loved.

Fortunately,
money would never be an issue for his daughter since his recent
plans to expand his hotel chain and foray into resorts had placed
him firmly in the elite billionaire’s club.

“I was hoping
Alisa could help me with this,” she said, holding up the diamond
tennis bracelet they’d given her for her last birthday. “I always
have trouble with the clasp.”

“I’d be happy
to help,” Alisa said with a smile.

Liam watched
the two loves of his life, their heads bent together in
concentration. His daughter had dark features, much like his, and
Alisa was fair with light hair and eyes. He and his wife were
different in so many ways, yet she completed him. Since they’d met
and married, he found a sense of contentment he never thought
possible. He spent so many years building his empire and raising
his daughter that he assumed those were the only things that would
ever matter to him.

Then he sat
down beside Alisa on a flight to Las Vegas, and in the span of
twenty-four hours, she’d made him question everything he thought he
knew about what mattered. Being her husband was more important than
brokering multi-million dollar deals, so he gave up the life he
knew for the life they now shared in Alisa’s hometown of Nashville.
He was finally living his fantasy. A fantasy he hadn’t even known
he wanted until she made him realize how much he would stand to
lose if he was foolish enough to let her go.

“Is your
grandmother here yet, Abby?” Liam asked. His mother flew in on his
private jet from San Francisco to spend the holidays with them.
When he got tied up on a conference call, he’d sent his driver to
pick her up.

“I don’t think
so.” The doorbell rang, and Abby grinned. “I stand corrected. You
guys go back to whatever you were doing before I interrupted. I’ll
let Nana in.” She winked at her father. “Take your time. I’ll just
tell her you’re…
busy
.”

Liam tried to
hide his smile when he said, “Would you just answer the door,
kid?”

“I’m so glad
she’s home,” Alisa said when her stepdaughter walked out of the
room. “I’ve missed her.”

Watching the
relationship between his wife and daughter evolve was gratifying.
Abby’s mother had abandoned her as soon as she realized giving her
wealthy boyfriend a child wouldn’t secure her role as mistress of
his manor. His former girlfriend never even tried to build a
relationship with their child, yet the bond between Alisa and Abby
seemed instant and effortless.

Alisa reached
for his hand. “Let’s go greet your mother.”

He brought her
left hand to his lips, chuckling when the huge diamond nearly took
his eye out. “You look beautiful tonight.” The conservative, long
velvet dress with low cut back and scooped neckline hugged her new
curves to perfection, and the sight of her, pregnant with his baby,
turned him on in a way no tight, short, little black dress ever
had.

He silenced
her with a kiss as he framed her face with his hands. He hated that
she couldn’t see herself the way he saw her. “You’re gorgeous,” he
said, pulling away. “And you should know better than to argue with
me.”

Alisa smiled
as she locked her hands around his neck. “You may intimidate
everyone else, but you don’t scare me, Liam Bryson.”

“That’s
because you have me wrapped around your little finger and you damn
well know it.” He laughed at her smug smile. “If my board of
directors could see me, totally at your mercy, they’d question
whether the company was safe in my hands.”

Alisa smiled
before pressing a kiss to his lips. “Don’t worry, sweetheart. It’ll
be our little secret.”

Liam grunted.
“Some secret. Anyone in the same room with us can tell your
happiness is the only thing I give a damn about these days.”

“That, and
your daughter,” Alisa said quietly, rubbing her stomach gently.
“This baby is going to be the luckiest little boy or girl in the
world to have you as his father.”

Liam held her
tight. He fought back emotion as he remembered all of the mistakes
he’d made when Abby was growing up. He missed out on so many
important events because his business took him all over the world,
and he questioned whether he was the parent she needed every day.
He was so afraid his absence would make her bitter or resentful,
and she’d throw his love back in his face as she blamed him for
caring more about amassing wealth than raising her. Nothing could
be further from the truth, but that didn’t ease the pain of knowing
he hadn’t always been there when she needed him.

“Hey, what’s
wrong?” she asked, bracing her hands on his shoulders as she pulled
back to look him in the eye. “Why do you look so sad all of a
sudden?”

“I was just
thinking about the mistakes I made with Abby. Sometimes, I wonder
if she resents the choices I made.”

“Honey, how
can you even think that?” Alisa asked, cupping his cheek. “You’re
her hero. Your hard work allows her to live her dream. She knows
that, and she appreciates all the sacrifices you made. Believe
me.”

Liam’s eyes
fell to the baby Alisa carried, and he said, “I just wonder if she
ever feels bitter. Her entire life, I was so focused on building
the business, and then you came, and within a matter of weeks, I
decided to start delegating so we could build a new life together.
Do you think she wonders why I never made that kind of sacrifice to
spend more time with her?” That was on his mind a lot since his
daughter left for school, especially since he found out he was
getting another chance to be the father he’d never been to
Abby.

He shrugged.
“I’m not sure she’d be honest with me. Abby’s a sweet, sensitive
girl. She wouldn’t want to hurt me.”

“And I know
you would never, ever, do anything to hurt her.” Alisa placed his
hand on her stomach when the baby kicked, making him smile. “You’re
an amazing father, Liam. Don’t ever doubt that.”

He approached
everything in his life with fierce determination, but he couldn’t
help but feel when it came to being a parent that he’d fallen
short. “I guess we should get out there. Abby’s going to have her
grandmother convinced we’re in here…” Liam laughed when a blush
stole over Alisa’s cheeks. “I’m just teasing. Come on, let’s
go.”

The princess of Burundi by Kjell Eriksson
Serial Love: Saints Protection & Investigation by Jordan, Maryann
Leap of Faith by Blair, Jamie
Behind Your Back by Chelsea M. Cameron
Who Saw Him Die? by Sheila Radley
Among the Nameless Stars by Diana Peterfreund
Lady of the Star Wind by Veronica Scott
Into The Void by Ryan Frieda
The Shining Stallion by Terri Farley
A Duchess to Remember by Christina Brooke