Read His Diamond Like No Other (Mills & Boon Medical) Online 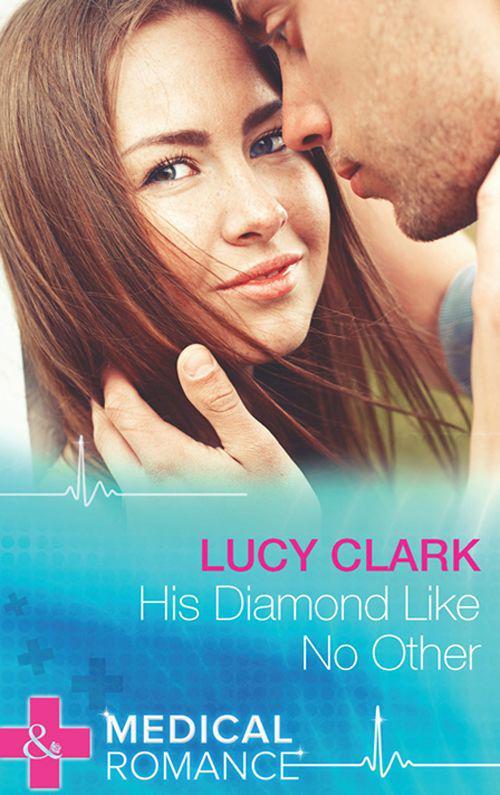 While I was writing HIS DIAMOND LIKE NO OTHER it was winter in Australia. The cold, the rain and catching the inevitable cold. I was lying in my bed, sneezing and snuffling and generally feeling sorry for myself, but thankfully I had Jane and Sean to brighten my day and keep me company. This also might explain why HIS DIAMOND LIKE NO OTHER is set in summer! Oh, I could just
feel
that glorious sun on my face as I entered their lives.

HIS DIAMOND LIKE NO OTHER is also my 60
th
Mills & Boon
®
Medical Romance™ title. I confess at times it was very difficult to write, because I wanted to make it extra-special, extra-memorable and extra-gut-wrenchingly heartfelt. I do love Jane—so very much—but the thing I love most is that even though she’s experienced some emotionally distressing times she hasn’t let it beat her. She’s been forced to save herself, to become a strong, independent woman, and it’s these very qualities that attract Sean to her.

Sean made me smile and laugh and clap my hands like a silly schoolgirl. He has such presence and drive, and a loving, supportive family. I delighted at his relationship with his son, as well as the closeness he shares with his parents and sisters. Family is important, and Sean is not only able to show Jane that, but to open up his world and share it with her. Now,
that’s
being a true hero!

I hope you enjoy HIS DIAMOND LIKE NO OTHER.

Even though I’m all grown up now, I still need you both. Thank you for always being supportive and generous and loving.
—Ps 103

‘A sweet and fun romance about second chances and second love.’
—HarlequinJunkie.com
on
DARE SHE DREAM OF FOREVER?

HER MISTLETOE WISH
THE SECRET BETWEEN THEM
RESISTING THE NEW DOC IN TOWN
ONE LIFE-CHANGING MOMENT
DARE SHE DREAM OF FOREVER?
FALLING FOR DR FEARLESS
DIAMOND RING FOR THE ICE QUEEN

These books are also available in eBook format from www.millsandboon.co.uk

Sean Booke’s deep voice vibrated through Jane’s body, causing her insides to tremble. She closed her eyes for a split second and forced herself to remain calm, at least on the outside. It wouldn’t do to allow her ex-brother-in-law to rile her. Pasting on a polite smile, she turned to look at him, unconsciously shifting her glasses and straightening her shoulders, tugging at the sleeves of her top to ensure they covered her wrists. It was a defence mechanism, developed over many years to hide the scars which were a permanent reminder of the darkest time in her life.

Sean Booke stood before her, more vibrant, more handsome, more intimidating than he’d been the last time she’d seen him, which had been three years ago at her sister’s funeral. Back then he’d been dressed in a black suit, which had perfectly matched his mood, and at the wake she’d had little chance to speak to him as he’d somehow managed to manoeuvre his way around to the opposite side of the room to wherever she’d been.

Eventually she’d received the message. Sean hadn’t wanted to speak to her and it appeared, given the gruffness of his tone, that nothing had changed. He carried a small, slim computer tablet as well as two sets of patient files. Jane cleared her throat.

‘How are you, Sean?’ She silently congratulated herself on her polite, impersonal tone as she headed into the paediatric ward conference room ahead of him, wishing she hadn’t been adamant about being early for her first scheduled ward round. She was nervous enough, not only about starting her new job but about Sean’s reaction to her presence at his hospital.

He ignored her question, his brow deeply furrowed as he followed her. ‘
You’re
the new paediatrician?’

She turned and looked at him, pleased they were alone for this conversation. It had been inevitable, especially when she’d accepted the position at Adelaide’s Children’s Hospital. There was no coincidence about it. She’d decided it was time for her to return to Adelaide, to work at this particular hospital, the hospital where, at the age of thirteen, she’d been a patient. It was time she made the effort to put her ghosts to rest but she had to admit that Sean Booke was far from a ghost, especially with the way his spicy scent seemed to wind itself around her.

‘I couldn’t believe it when I read the inter-office memo announcing your arrival. Specialist paediatrician in juvenile eating disorders.’ He put his bundle of notes and computer tablet onto the table then stared at her, as though he really could not believe it. Jane tried not to tug on her baggy top, which hung rather low over her ankle-length skirt. Fashion had never been her thing; instead, she’d focused on studying and getting good grades.

‘I mean, how many Jane Diamonds are there in the world?’ Sean shook his head, his words still filled with an angry bitterness that was simmering just below the surface. He turned and walked over to the window. ‘How long is your contract?’

‘Twelve months.’ She wanted to tell him she hadn’t meant to cause him any pain but she didn’t think he’d believe her. As far as Sean was concerned, he’d tarred her with the same brush as Daina. The fact that Jane had always been the polar opposite of her older sister clearly was of little concern to him.

‘And you
chose
to come here? You knew this was
my
hospital.’

‘I was
invited
to come and work here, Sean. I just didn’t turn it down.’

‘You?’ He glanced at her over his shoulder, frown still in place. ‘You were head-hunted? By whom?’

‘Luc Bourgeois.’ Jane tried to be brave, tried to hold his piercing blue gaze. She pushed her glasses onto her nose and nodded. ‘I guess my past experience working with Professor Edna Robe has finally paid off.’

‘Robe? World-leading specialist in the field of paediatric eating disorders?’

Jane raised her chin, telling herself she had no reason to hide her successes. ‘I’ve co-authored five papers with her and presented our findings two months ago at an eating disorder conference in Argentina.’

He turned from the window, arms still crossed, and looked at her more closely. ‘Huh!’ was all he said, leaving Jane to ponder what on earth that might mean.

They remained silent for a minute, Jane wondering whether she should say something else, anything else, rather than stand here and not speak a word. Sean was the man who had been married to her sister, he was the father of her only living blood relative—six-year-old Spencer. She was desperate to ask him about her nephew but wasn’t sure, given the reception she’d just received, whether that was a good idea. Then again, perhaps he might think her strange if she
didn’t
ask.

‘You need more confidence in yourself, Jane,’ Professor Robe had said to her late last year, hence why Jane had been the one presenting the paper in Argentina. Confidence? She had confidence in spades when it came to treating and caring for her young patients but a one-on-one confrontation with the man who had the power to refuse her request was bringing her inner doubts to the fore. She had to get past it.

‘How’s Spencer?’ The words were out of her mouth before she could stop and analyse them any further.

Sean’s frown returned but it wasn’t as deep as it had previously been. ‘He’s fine.’

‘How’s he doing in school?’ Now that she’d opened the discussion, she really did want to know more. She had so many questions about her nephew, along with the wish that Sean would grant her access to him.

‘Does he have any plans for his birthday? A present list? I’d rather get him something he really wants than have to guess.’ Good heavens. She was starting to babble now.

The arms tightened defensively over his chest and Jane found herself momentarily distracted by the way his crisp white shirt pulled around his biceps. She tried to school her senses. Of course Sean was a dynamic, good-looking man. It was the reason her wayward sister had been attracted to him in the first place.

‘Why do you want to know about Spencer? You’ve never shown more than a passing interest in him before now.’

Jane felt as though he’d slapped her as that clearly wasn’t true. ‘I’ve sent Christmas and birthday presents every year,’ she defended, feeling her temper beginning to rise. Usually, she was quite a calm and controlled woman but when she thought about facing her future, one of only work and loneliness, she was filled with desperation...desperation to make sure that
didn’t
happen. Now she was desperate to make sure Sean realised just how much she loved her nephew, even though she didn’t know him as well as she would have liked.

‘And you’ve always been more than generous with your gifts. Still, you’ve never made any effort to see him.’

‘Any effor—’ She broke off her incredulous reply as two paediatric nurses walked into the conference room, greeting Sean with bright smiles. Jane boxed up her simmering anger at Sean and put it aside, pulling on her professionalism. When Sean made no effort to introduce Jane, instead immersing himself in setting up his computer and connecting it to the equipment in the room, Jane forced herself to step forward and hold out her hand. ‘Hi. I’m Jane Diamond.’

‘Oh the new paediatrician, the eating disorder specialist,’ one of the women stated, shaking Jane’s hand. ‘Welcome. I’m Anthea. This is Romana. We’re really glad you’re here. Such a necessary sub-speciality you cover.’ Anthea was still nodding as she spoke. ‘Let us know if you need help settling in or finding your way about the hospital.’

Jane smiled, ignoring Sean’s presence completely. ‘I was actually a patient here, in this very ward, when I was thirteen.’

‘It doesn’t seem like the general hospital layout has changed all that much since then.’

‘Sad but true,’ Romana said with a laugh.

‘At least the equipment’s been updated,’ Anthea added, smiling. As more people came into the conference room, Anthea made sure Jane was introduced. Sean had moved to the corner of the room and she could almost feel him watching her, but every time she glanced in his direction he was either deeply engrossed in conversation with someone else or looking at a set of scans that were due to be discussed during the short prelude before the ward round.

The pre-ward round began with head of unit, Luc Bourgeois, introducing her. ‘Jane and I worked together in Paris for twelve months and I have to say, when she finally agreed to my constant pleading to come and work here, I was relieved. Eating disorders, especially amongst children under the age of eight, have gone unchecked for too long. This hospital plans to change that. Jane will be undertaking a research project whilst she’s here and I’m expecting everyone to afford her every professional courtesy with regard to patient care and participating with the project if required.’