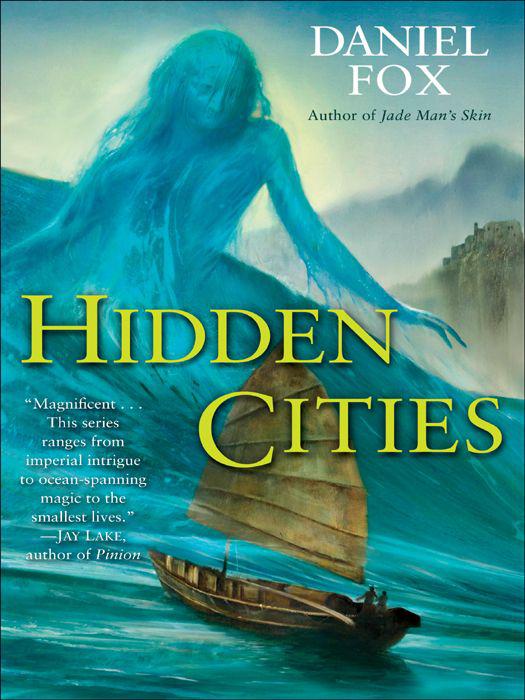 Praise for
MOSHUI: THE BOOKS OF
STONE AND WATER
BY
D
ANIEL
F
OX

“Daniel Fox tackles his material (loosely based on the myths and history of Old China) with a combination of insight, innovation, and sheer command of language that transforms it.… Now I’m waiting for the next book, with all the impatience of a dedicated fan!”

“
Dragon in Chains
is a compelling blend of high-stakes action, well-drawn characters who I really cared about, and a gorgeously painted landscape. This is the kind of fantasy I love to read.”

“A rising star … With talent like Fox’s, the future of fantasy is in good hands.”

“Daniel Fox’s poetic prose … makes even the mundane seem marvelous.… Definitely a novel—and a series—that should be on every fantasy reader’s radar.”

“Fox is a lyrical writer whose greatest strength is evoking the mood and feel of a place—Taishu feels as solid and real as the chains that restrain the titular dragon.”

“Brutal, brilliant, complex, and startlingly clear all at once, this series does a magnificent job of taking the reader into a culture, a time, a place that most of us have never considered.”

“[Builds] on the brilliantly subtle groundwork laid in 2009’s
Dragon in Chains
… Readers who enjoyed Fox’s delicate descriptions and leisurely prose will be thrilled to find more of the same, along with greater depth of story as the numerous characters are pulled together by schemes and destiny.”

“Fox’s love of all things Chinese shines through this sequel to
Dragon in Chains
, which should appeal to fans of Asian-themed fantasy such as Lian Hearn’s
Across the Nightingale Floor
and Barry Hughart’s
Bridge of Birds.
”

“This is both a stand-alone story and an excellent continuation of Fox’s previous novel. Set in a richly detailed, feudal, Asian-style empire, the plot revolves around rebellion, betrayal and bonds.… All told, it is a tale that’s hard to put down until the last line.”

T
HE
B
OOKS OF
S
TONE AND
W
ATER 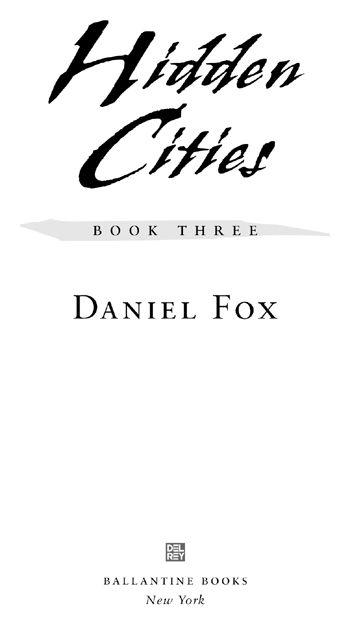 Hidden Cities
is a work of fiction. Names, characters, places, and incidents are the products of the author’s imagination or are used fictitiously. Any resemblance to actual events, locales, or persons, living or dead, is entirely coincidental.

Published in the United States by Del Rey,
an imprint of The Random House Publishing Group,
a division of Random House, Inc., New York.

D
EL
R
EY
is a registered trademark and the Del Rey colophon
is a trademark of Random House, Inc.

A book without a dedication
is like a kiss without salt.
Or something
.

Part One - To Ride the Dragon

Part Three - Too Wide a Sea

Part Five - Cities of the Heart

id he think she was angry, before?

Well, yes. He did think it, and he was not wrong. He had felt the slow stew of her anger, fed over centuries in chains below the sea; he had seen the sudden flare of it when she was suddenly free, when she destroyed a whole fleet of men and ships for their impertinence, abroad upon her waters; he had endured the storm of it when she found herself not so free after all, when she raged through the typhoon.

He had faced her in her fury more than once, eye to eye and far too close.

He still thought he had never seen her quite this angry, and entirely at him.

There were proverbs Han knew, teaching people how very foolish it was to make promises to a dragon.

I know I did
. She loured above him, where he stood too close.
I did promise, and I am sorry. I had not meant for this to happen
.

She knew that, she was in his head.

Because she was in his head, she must know this too: that there were just two things he would not willingly relinquish, out of all the world. Despite all terror, and all betrayal. Tien was one of them, and actually this was the other: this constant grinding oppression of scale, this teetering always on the edge of a catastrophic
fall. This revealed savagery, this terrible landscape, eternal wrath, this dragon.

Overnight Cinderella by Katherine Garbera
The Minus Faction, Episode One: Breakout by Rick Wayne
Dragon Lady by Gary Alexander
Monsieur Pamplemousse on Vacation by Michael Bond
The Ghost in the Machine by Arthur Koestler
Forbidden Steps: A Stepbrother Romance by Sommerland, Bianca
Jack by Cat Johnson
Stone Soldiers: City of Bones by C. E. Martin
Rebecca's Heart by Lisa Harris
Against the Day by Thomas Pynchon