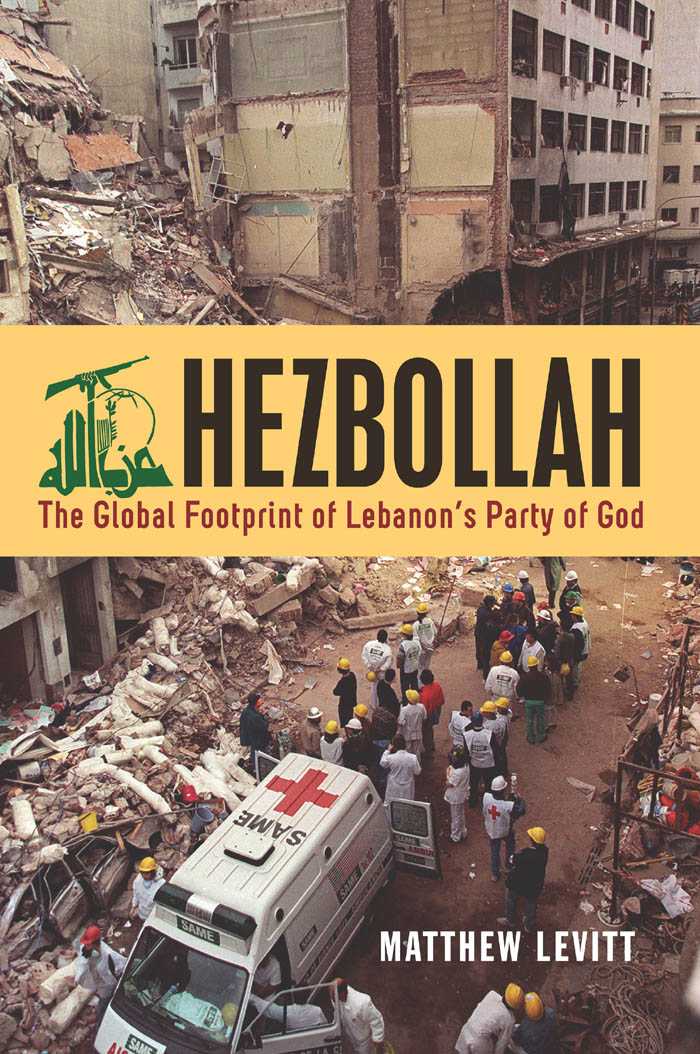 Additional Advance Praise for
Hezbollah: The Global Footprint of Lebanon’s Party of God

“Matthew Levitt has laid out a timely and relevant history of Hezbollah, a global terrorist organization often referred to as the ‘A Team’ of terror. This book comes at the right time as Hezbollah continues its decades-long war against the United States, Israel, and our allies around the globe while it attempts to consolidate political power in Lebanon—on its behalf and for the Iranian regime.”

“Richard Armitage, then Deputy Secretary of State, once described Hezbollah as the ‘A team’ of international terror. In his extraordinary new book, Matthew Levitt explains why Hezbollah is seen as such a global threat. Levitt paints a compelling picture of Hezbollah’s terror activities not just in the Middle East but throughout Europe, Asia, Africa, and North and South America. While Western intelligence and law enforcement agencies have tracked and disrupted Hezbollah’s global activities for years, this highly unsettling story has been largely unknown to wider publics. Thanks to Levitt’s meticulous and well-written book, that should no longer be the case.”

—
Ambassador Dennis Ross
, counselor at the Washington Institute; former Special Assistant to President Obama and Senior Director for the Central Region at the National Security Council

“This book tells the sinister story of a highly sophisticated organization that for more than thirty years has been an archetype of worldwide illicit activities. Hezbollah effectively combines its overt social and political activities with covert criminal and terrorist operations on a global scale. Matthew Levitt’s painstaking collection of a rich array of data provides uncomfortable evidence of ‘
The Global Footprint of Lebanon’s Party of God’
. This book is essential reading for policymakers and the international intelligence community.”

“In
Hezbollah: The Global Footprint of Lebanon’s Party of God
, Matthew Levitt, through adept storytelling and impressive attention to historical detail, manages to teach even long-time students of the Middle East a great deal about Hezbollah. The book leaves little doubt as to the increasing importance, danger, and international reach of Hezbollah. It will be an important resource for serious scholars of the Middle East and a great read for anyone interested in better understanding the region.”

“Matthew Levitt’s book touches a key point of the growing debate on Hezbollah: the European approach to the phenomenon. It is a reminder for us Europeans that there are threats that might seem distant geographically, but could nevertheless have a strong impact politically on the continent as well.”

“This book on Lebanese Hezbollah is a unique incisive insight into its global terror tentacles around the globe. No one has catalogued these terrorist connections and plots in such forensic detail as Matthew Levitt, especially how the terror nexus between Hezbollah and Iran has continually evolved. It systematically lays bare Hezbollah’s operational capability and its multiple intersections with Iranian intelligence architecture. This should be required reading for every intelligence analyst and terrorism researcher.”

The Global Footprint of Lebanon’s Party of God

©2013 Matthew Levitt. All rights reserved. No part of this book may
be reproduced or utilized in any form or by any means, electronic
or mechanical, including photocopying and recording, or by any
information storage and retrieval system, without permission in
writing from the publisher.

∞This book is printed on acid-free paper meeting the requirements of the American National Standard for Permanence in Paper for Printed Library Materials.

For my parents,
who made it all possible

And my wife and children,
who make it all worthwhile

1 The Party of God Is Born

2 Branching Out:
Targeting Westerners in Lebanon and Beyond

5 A Near Miss in Bangkok

6 Beirut to the Blue Ridge:
Hezbollah Comes to North America

9 Finance and Logistics in Africa

THIS BOOK IS THE PRODUCT
of a decade of research and writing, based on interviews with officials and experts from five continents, declassified intelligence reports, court documents, and much more. Some people spoke on the record, but more spoke on background or not for attribution, either because they still work in government or because they feared putting at risk their future access to people in Lebanon. Many people also helped me obtain documents that, though unclassified (or declassified), were not necessarily accessible to the public. I have thanked these people privately, and do so again here—the reader will not know their names, but they know who they are and will recognize themselves in this acknowledgment all the same.

Special thanks are due to my friends and colleagues at The Washington Institute for Near East Policy, where I am a senior fellow and direct the institute’s Stein program on counterterrorism and intelligence. I am especially grateful for the support of the institute’s executive committee, board of trustees, and executive director Robert Satloff. The institute’s senior research staff was a constant source of support, and I am a wiser person for having the opportunity to be a part of this truly remarkable intellectual community.

I owe a special thanks and acknowledgment to the various research assistants and interns at The Washington Institute who at some point over the past few years put their hearts and souls into this study, including David Bagby, Ben Freedman, Shoshana Haberman, David Jacobson, Julie Lascar, Jake Lipton, Julia Miller, Michael Mitchell, Jonathan Prohov, Aaron Resnick, Guive Rosen, Gabriela Rudin, Nick Shaker, Melissa Trebil, and Kelli Vanderlee. As researchers, data organizers, fact checkers, editors, formatters, sounding boards, and partners in crime, the institute’s cadre of researchers have been second to none throughout this project.

But among the research assistants who worked on this book with me, four stand out for the amount of time and energy they invested in the project. Samuel Cutler, Stephanie Papa, and Becca Wasser each spent over a year organizing material, scheduling interviews, drafting timelines, and so much more. These three saw me through the long haul of organizing the massive quantity of material I collected into
a coherent, usable archive so that I could start drafting chapters. All told, Divah Alshawa will have spent over two years on this project, including many rounds of “final” editing, fact checking, and formatting. I often had to kick her out of the office at the end of the day, only to find that she’d gone home and worked on the manuscript there too. Any errors or typos that may have slipped through are mine alone, but the reason there will be so few, if any, is that Divah made sure that would be the case.

Special thanks to Jason Warshof, editor extraordinaire, who invested countless hours working with me on each draft chapter. When the final manuscript submission came out well over the expected word count, Jason stepped in to help trim the fat and keep the book as lean and focused as possible without losing key content.

I want to thank the academic peer reviewers selected by Georgetown University Press who gave generously of their time to review the manuscript in its entirety and offered tangible comments and guidance. A host of other, informal readers reviewed sections of the book, and I am very grateful to them as well. My editor at Georgetown University Press, Don Jacobs, was a calming influence when I needed him to be and gently prodding when he had to be. Always supportive and with the patience of Job, he encouraged and supported me throughout the project as it crept along, sometimes at a snail’s pace. Once submitted, the manuscript was expertly prepared and promoted by the press staff. It was a stroke of genius on the part of my literary agent, Robbie Hare, to match me with Don and Georgetown University Press. Robbie is a valued friend and an exceptional agent, and from the moment she read the early proposal that became this book was its most ardent supporter.

Finally, I recognize how tremendously blessed I am to be a part of such a loving, supportive family. I am truly grateful to my family—including my parents, in-laws, children, and my incredible wife, Dina—for their love, support, and patience.

IN MAY 2003 I PARTICIPATED
in a conference for current and former US law enforcement and intelligence personnel on Lebanon. Sponsored by the US government and featuring speakers from the United States and Lebanon, each of the conference panels was chaired by a US official. Strikingly, when participants on several panels insinuated that Hezbollah had never engaged in an act of terrorism or that there was no such person as Imad Mughniyeh (Hezbollah’s late operations chief)—both concepts being American or Israeli fabrications—the US officials chairing the respective panels said nothing. The issue was put to rest once the session was opened up to questions from the audience, but the experience left me convinced of the need for a serious study focusing on Hezbollah’s clandestine activities worldwide to complement the already rich literature on the party’s overt activities in Lebanon.

“Due to the secretive nature of [Hezbollah’s terrorist wing], it is difficult to gather information on its role and activities,” an Australian government report acknowledges.
1
Hezbollah, to be sure, goes to great lengths to hide its covert and illicit activities, severely complicating the prospect of conducting open source (i.e., unclassified) research on the subject. As a former FBI agent put it, groups like Hezbollah “are well aware of our interest in them and what our intentions are” and therefore “they have become experts in the art of concealing their activities.”
2
It should therefore not surprise that this book is the product of almost a decade of painstaking research. Collecting publicly available material only underscored the dearth of detailed information available on even such well-known incidents as the 1992 and 1994 bombings in Buenos Aires. As for other incidents, like the failed 1994 attempt to bomb the Israeli embassy in Bangkok, the vast majority of people—among both the general public and professionals in the field—had no idea these events had occurred at all.

The Curse of the Ice Serpent by Jon Mayhew
The Apple Tree by Daphne Du Maurier
A Flash of Green by John D. MacDonald
Dusted by Holly Jacobs
Daughter of York by Anne Easter Smith
Tangling With Ty by Jill Shalvis
Juked by M.E. Carter
How by Dov Seidman
Secret Heart by David Almond
Meanwhile Gardens by Charles Caselton