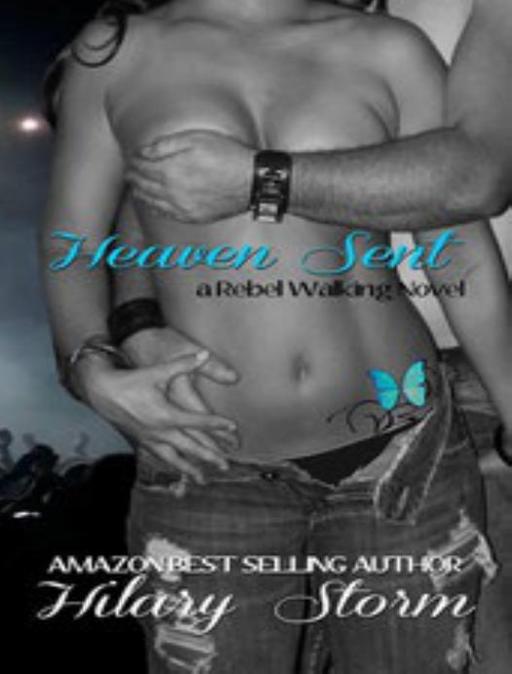 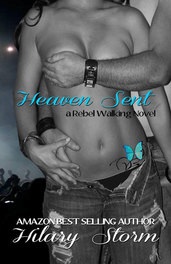 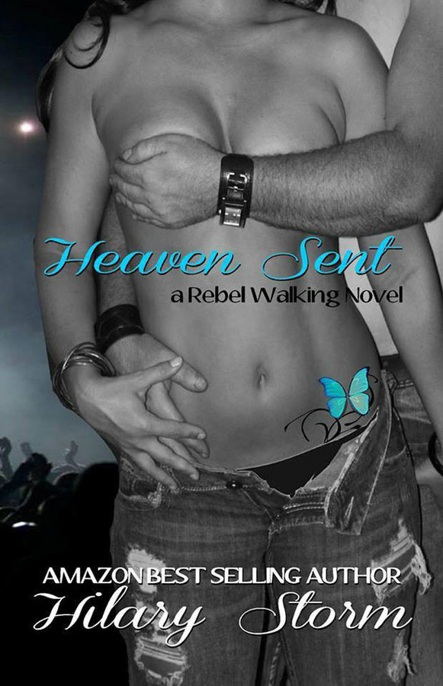 All rights reserved. Except as permitted under

U.S. Copyright Act of 1976,
no part of this publication may be reproduced, distributed, or

transmitted in any form or by any means, or

stored in a database or retrieval system, without

the prior written permission of the publisher."

This is a work of fiction. Names, character,

places and incidents are either the product of the

author’s imagination or are used fictitiously, and

any resemblance to actual persons, living or

Find out more about the author and upcoming

'In a Heartbeat' was dedicated to those

who believed in the possibility before it became a

'Heaven Sent' is dedicated to those who

helped make it a reality.

I’m trying to fight my attraction to

Taron, but my heart doesn’t seem to

listen to my mind. I know it’s a disaster

waiting to happen if I give in, yet I still

keep thinking of the possibilities.

He loves to flirt. So do I.

He will be leaving to go on tour

He was there for me when I

thought I lost my best friend. The title

‘best friend’ doesn’t really do what we

have justice. Eaven is my sister. We

may come from different blood, but in all

aspects that count we are family. A

couple of months ago Eaven was

kidnapped and driven into the river by

side the entire time we were searching

for her or when she was recovering in

hospital. He has been to my

apartment to check on me daily since

Eaven has been staying with Talon to

Don’t get me wrong. He has

continuously made advances toward me

since we found out Eaven was going to

be ok. He flirts non-stop, but I’m a girl

who likes all of that attention. I just

I have to decide if I can handle

sharing him before I give myself to him

completely. After all he is the lead

singer in the band ‘Rebel Walking’.

They are going to be gone more on tour

now. This will be their second time to

go on tour with main stream bands. They

were such a huge success the first time,

they were chosen to be the opening band

at every single one of ‘Beckoning

Reality’s‘ concerts. I heard all of the

details from Taron when he called to

check on me while he was away on the

I’ve managed to fight him off until

this point, but I’m sure since he leaves in

the morning, he will be trying extra hard

tonight to get me to cave.

Smitty has kicked off a celebration

to send the band off in style. It looks

band one last time. This place is

Eaven and I went shopping for

new outfits this week. She wants to look

exceptional tonight since she is sending

her fiancé off for four weeks. She is just

recently engaged to Talon and they are

perfect for each other. I am so excited

that she found someone who makes her

happy and treats her right. He just

happens to look identical to the guy that I

Taron Walker are identical twins. The

story of the two sisters falling in love

with twin bad boys is one that never

I look over and see Taron at the

band’s reserved table talking to his

twin. My eyes shift to his broad

shoulders and the dark, tight shirt that

doesn’t leave much to the imagination.

I’ve been in his arms a few times and I

know that his chest and stomach are

sculpted and just as defined as the shirt

makes it appear. He has dark hair,

almost black. He wears it messy so that

it looks like he just got out of bed. The

look really works for him. I know that

he does put effort into his hair because I

have been stuck waiting on him to get

He jumps up to pester his older

brother Holden and I begin to appreciate

the view of his ass in those jeans. His

to see. I’ve never let him know that I

appreciate how he looks. He would

never let me live it down if I did.

Eaven leaves me to make her way

to Talon. I see Taron begin to search the

room as soon as he sees her arrive. He

spots me and starts to look me up and

down. His eyes never leave me as he

stalks across the room.

“Poison Ivy! It is such a pleasure

to see you out for the kill tonight.” He

takes his index finger and runs it down

my chest and into the valley of my

cleavage causing my shirt to lower. He

stops just before he exposes me.

“Do you want to lose that finger?”

I really want him to continue, but I

would never tell him that.

“I would love for you to take my

entire finger.” He removes his digit

from my chest and I know his meaning

behind his reply. He has never been shy

about his sexual desire with me.

“In your dreams.” I turn away

from him to begin my walk to the table.

He stops me after only a few steps. He

grabs my hips and holds me against him.

I can feel him invading my space again.

He is consuming all of my senses. He

leans down to whisper in my ear.

“Yea that pretty much sums it up.”

My body heats up as his breath

blows past my ear. The sensation sends

a shiver through my body and heat

straight to my core. He holds me so

close that I can feel how much he wants

me as it presses into my backside.

“When are you going to quit

playing hard to get? You know we will

be hot together. You know you want

what only I can give you.” He begins to

sway back and forth with the music.

I want what he is offering me so

much. I want to let go and ride the roller

coaster that is Taron. I know there will

be ups and downs. I just don’t know if I

can hang on until the end and exit the

ride safely. I don’t know if he will

Usually I don’t let myself get

attached to a guy. We have fun and then

say our goodbyes. Taron managed to

work his way into my life in a way that

we are so beyond a simple affair without

strings. I just don’t know if he is

capable of what I want.

through the lump in my throat.

“I don’t have any intentions of

sharing you.” He flips me around to face

him. He guides my arms over his

shoulders and slowly drags his hands

back down my arms, down my sides, and

then around my waist. He flattens both

of his hands out on my butt cheeks and

presses me further into him. We

continue to sway with the music.

I look into his eyes. I can see

desire. I can see the same heat that I

feel. I decide to give in. I pull him

down to meet my lips. He doesn’t waste

any time joining my tongue. I know he is

a great kisser. We have already

established the hot chemistry between us

once before. He continues to press

himself into me and the pressure makes

me crave more of him.

“Spend the night with me.” He is

begging me through the tone of his voice.

I bow my head in thought and he

kisses my forehead. He uses his large

hands to guide my head back up to look

at him. He closes his eyes as he nears

me and begins to softly kiss my lips.

This gentle side of him is my undoing.

“My place isn’t as crowded. I’m

pretty sure you won’t want your brothers

to hear what I have planned for you.” I

nibble on his bottom lip as I pull away

“Fuuuuccckk Me.” He has a huge

smile on his face.

“I have to sing a few songs and

then you are mine.” He holds me tight

until the rest of the band has taken the

stage. When Talon and Luke start to

anywhere. I want to watch you while I

I stay exactly where he leaves me.

I enjoy the songs so much more this

directly to me. His eyes are intense and

he never really looks anywhere but at

me. The crowd is still going wild trying

to get his attention. Panties and bras are

thrown up at him, but he never averts his

attention away from me.

I feel someone up against my back

and I turn to see who is standing this

close to me. It’s Dylan. His job

relocated him a couple of months back.

We went out a couple of times, but we

“Hey Dylan.” I smile at him and

place my hand on his arm stepping

sideways just a little to give myself

The Happiness Trap by Harris, Russ
Once Upon a Caveman by Cassandra Gannon
No One But You by Leigh Greenwood
The Gamer's Wife by Careese Mills
Always Be Mine~ by Steitz, G.V.
Radiance by Shayne McClendon
The Ninth Dominion (The Jared Kimberlain Novels) by Jon Land
Singing the Dogstar Blues by Alison Goodman
More Beer by Jakob Arjouni
Horrid Henry's Christmas by Francesca Simon