Read Heart of the City Online

Heart of the City 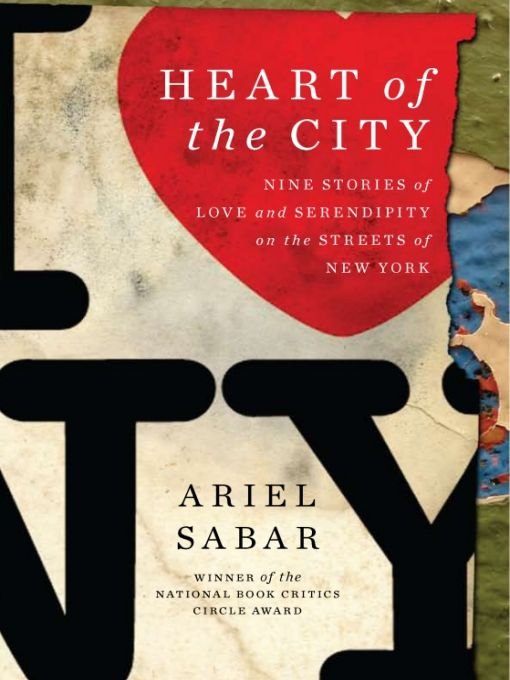 Table of Contents
Praise
Title Page
Dedication
Epigraph
Introduction
A Note on Method
Green - CENTRAL PARK
Collision - THE STREET
Navigation - GRAND CENTRAL TERMINAL
Freestanding - LIBERTY ENLIGHTENING THE WORLD
Depths - THE SUBWAY
Elevation - EMPIRE STATE BUILDING
Crossroads - TIMES SQUARE
Renovations - THE METROPOLITAN MUSEUM OF ART
Sightlines - WASHINGTON SQUARE PARK
Epilogue
Postscripts
Acknowledgements
Copyright Page
Praise for Ariel Sabar’s
My Father’s Paradise
“Graceful and resonant ... A personal undertaking for a son who admits he never understood his unassuming, penny-pinching immigrant father, a man who spent three decades obsessively cataloging the words of his moribund mother tongue. Sabar once looked at his father with shame, scornful of the alien who still bore scars on his back from childhood bloodlettings. This book, he writes, is a chance to make amends.”
—
New York Times
Sunday Book Review
“If Ariel Sabar’s
My Father’s Paradise
were only about his father’s life, it would be a remarkable enough story about the psychic costs of immigration. But Sabar’s family history turns out to be more than the chronicle of one man’s efforts to retain something of his homeland in new surroundings. It’s also a moving story about the near-death of an ancient language and the tiny flicker of life that remains in it.... ”
—
Washington Post
“A wonderful, enlightening journey, a voyage with the power to move readers deeply even as it stretches across differences of culture, family, and memory.”
—
Christian Science Monitor
“A powerful story of the meaning of family and tradition inside a little-known culture.”
—
San Francisco Chronicle
“A biography, a memoir, a meticulously reconstructed history of a largely vanished people and place, and a meditation on one of the world’s oldest languages. Transcending mere reportage, it acquires a novel-like warp and weft.”
—
Los Angeles Times
“A remarkable new memoir ... Sabar’s
Paradise
is especially noteworthy because of its multilayered narrative. While it begins with a young man’s personal and familial crisis, it ends up exploring universal themes about the linguistic origins of culture and about the vital importance of tradition to the health of any community.”
—
Philadelphia Inquirer
“Sabar offers something rare and precious—a tale of hope and continuity that can be passed on for generations.... Readers can only be grateful to him for unearthing the history of a family, a people and a very different image of Iraq.”
—
Publishers Weekly
, starred review
“Be forewarned: you will lose sleep over this book.... [Sabar] mesmerizes with the very first sentences.... In the tradition of the famed story-tellers of Zakho, Sabar narrates a saga so touching, so amazing, so miraculous that the reader will feel awe for the resiliency of the human spirit.... Unlike many memoirs flooding the book market these days,
My Father’s Paradise
is both unique and universal.”
—
Roanoke (Va.) Times
“With the novelistic skill of a Levantine storyteller ... Sabar explores the conflicting demands of love and tradition, the burdens and blessings of an ancient culture encountering the 21st century. A well-researched text falling somewhere between journalism and memoir, sustained by Mesopotamian imagination.”
—
Kirkus Reviews
“[Sabar’s] a lovely writer, slyly adapting his voice as needed to write about the different generations, shifting from the mode of a storyteller to the mode of a journalist. One of the best recent memoirs I’ve read.”
—
Huffington Post
“Taut and extravagant. A sweeping saga with the cadence of a Biblical tale.”
—Daniel Asa Rose, O. Henry Prize winner and author of
Hiding Places: A Father and His Sons Retrace Their Family’s Escape from the Holocaust
“An enchanting combination of history, family and discovery—Ariel Sabar’s chronicle of his journey is flat-out wonderful.”
—Rabbi David Wolpe, author of
Why Faith Matters
“Excellent. ... The story is told with novelistic attention to narrative and detail, but its heart is Ariel’s heart, that of a son searching with love for the meaning of his relationship with his father.”
—
The Providence (RI) Journal
“Written with a reporter’s flair for people and places ... Recommended.”
—
Library Journal
“An involving memoir that works as both a family saga and an examination of a lost but treasured community.”
—
Booklist 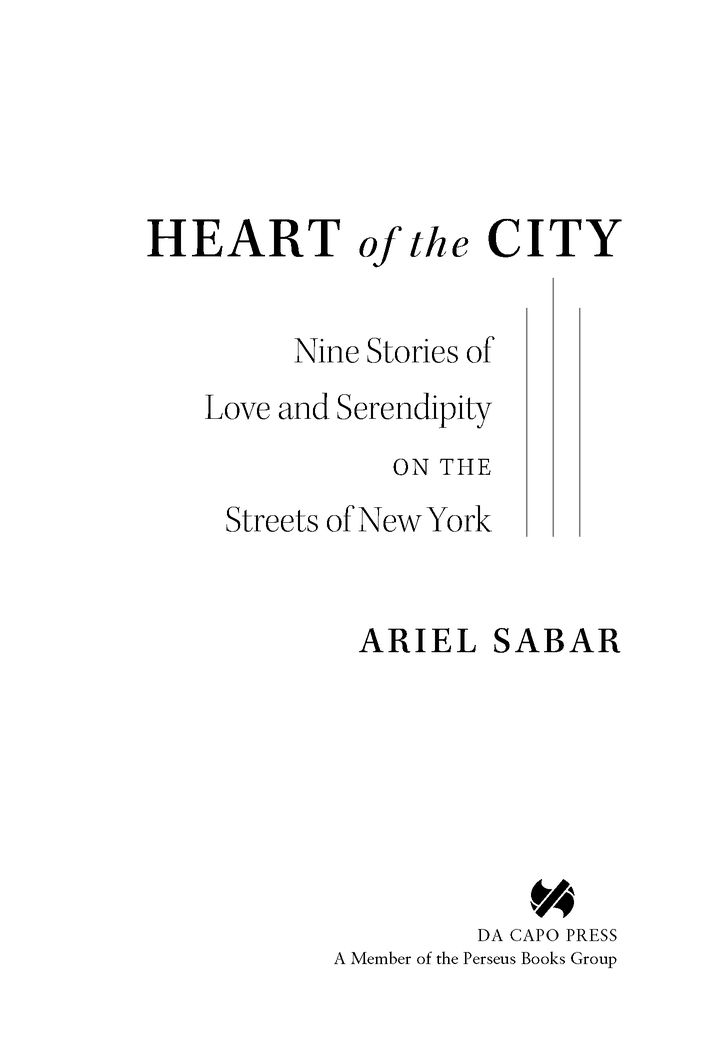 For Meg, who first caught my eye in the mess-hall slop line
“A city is, properly speaking, more poetic even than a countryside, for while Nature is a chaos of unconscious forces, a city is a chaos of conscious ones. The crest of the flower or the pattern of the lichen may or may not be significant symbols. But there is no stone in the street and no brick in the wall that is not actually a deliberate symbol—a message . . . as much as if it were a telegram or a post-card.”
—G. K. CHESTERTON
Introduction
In its original telling, the story of how my parents met has a tidy simplicity. Yona Sabar was born to an illiterate mother and peddler father in a mud hut in the mountains of Kurdish Iraq. Stephanie Kruger was born to a Manhattan CEO and his fashionable wife, holders of season tickets to the Metropolitan Opera. Yona, twenty-seven, had been in America for less than a year, for graduate school at Yale. He was depressed, homesick, and lonely, and was in New York for a long weekend to see friends from back home who now lived in the East Village. Stephanie, twenty-eight, was a caseworker at a foster agency in upstate New York. But her relationship with a boyfriend was on the rocks, so she drove to Manhattan for a few days to be with her parents.
It was Labor Day 1966, late morning. Yona’s friends had gotten up early to see a parade, but Yona was too dejected to join them. He wandered the streets and eventually walked under an arch into a leafy refuge of curving paths in the heart of Greenwich Village. A sign said Washington Square Park. Yona wanted only to clear his head, to think.
But then a woman caught his eye. She was in a raincoat and was photographing people—beggars, unwashed street musicians—on benches around the central fountain. Her subjects reminded Yona of his countrymen, hard-luck immigrants to Israel who struggled for a sense of belonging in their new country.
He did not know then that the woman’s name was Stephanie Kruger, or that she was an amateur photographer whose parents
lived just a few blocks away. Watching her flit through the park with her camera, he knew only that he wanted to talk to her, to see if she knew something about this country and its people that he had yet to grasp.
He closed his eyes for a moment, then opened them. Then, his legs moving as if by a force not wholly his own, he approached.
“Pardon me,” he said. “Are you a tourist?”
Four months later, they were married.

IT SEEMED like a quintessential New York story: two vastly different people brought together by chance in America’s greatest city. It said a lot about our country, I thought. It showed how immigrants here could leap borders of culture and class in ways unthinkable back home. It showed how in a society as fluid as America’s, any two people could fall in love, anywhere. It was Horatio Alger recast as love story.
I thought I knew their story well, having told it in my first book, about my father’s immigrant journey. But not long ago, when I asked my parents to tell it again, my mother injected a detail I had not heard before.
“Yona, didn’t you actually see me before I entered the park?”
“Em, aha, Stephanie, maybe,” my father said, in his gentle Middle Eastern accent.
“Yes,” my mother persisted. “You said you saw me on one of the side streets and started following me.”
“Eh, possibly. Into the park?”
“Yes, into the park! Where else? You followed me for a while on the street, and I remember what you once said.”
He looked suddenly guilty. “What, Stephanie? What did I say?”
“You said that it wasn’t until I was inside the park that you had the courage to walk up to me.”
“Correct,” my father said, with a nonchalance he often used when he knew he’d been cornered.
“So, wait a second,” I said, turning to my father. “You mean if she’d never gone into the park, you wouldn’t have tried to talk to her?”
“Correct.” The streets were too exposed, he said. Attractive as she was, it would have felt improper to strike up a conversation there. The park, though, was different.
I scratched my head. But how?
It was, he said, like stepping into a village. The park shrank the city. It slowed time. With its roving paths, its fountain and trees, it filtered away the facelessness and noise of the street. Once inside, he said, people ceased being strangers. For a fleeting moment, they were on common ground. They were
sharing
something: not just the leaves and grass and water, but the human carnival. The park’s habitués in those days—raffish New Yorkers sprawled on benches, picking at guitars, sipping from brown bags—were a sight to see. But so were the reactions they inspired in other people. Like Stephanie Kruger. From the way she photographed people, up close and with obvious empathy, Yona felt as though he already knew something about her. She sees the image of God in human beings, he thought, even when they are not at their best.
“The space was very important,” my father told me during a springtime visit to our house to see his grandkids. “The first thing I thought about when all my friends left that day was, Where can I go where I can be around other people? And friendly people. People who are open to communication. Whereas the rest of the city was tall buildings and all the noise and subways and buses and people rushing everywhere, Washington Square Park was the opposite. Here you could just be with people without all the commotion. This was a place where you could be yourself. You didn’t have to hide behind some mask.”
More than four decades had passed since they’d met. My father, a resident of Los Angeles since the early 1970s, hadn’t set foot in the park for almost as long. I was surprised at the intensity
of feeling. “What was so bad about the rest of New York?” I asked.
“The rest of the city alienates you in a way,” he went on. “If you are not with somebody when walking on the streets, you feel just smaller and smaller. The park was a small place where even if people didn’t know each other before, they behaved like family.”

A Class Apart by Susan Lewis
Hold Love Strong by Matthew Aaron Goodman
The Eldorado Network by Derek Robinson
At the Brink by Anna Del Mar
Sin and Surrender by Julia Latham
Mr. Big by Colleen Lewis, Jennifer Hicks
Russian Heat by Rhyll Biest
The Left Series (Book 6): Left On An Island by Fletcher, Christian
Foreclosure: A Novel by S.D. Thames
Like a Boss by Adam Rakunas